A terrific long Lakes route around the beautiful southern tip of Haweswater, on a day that veered between warm spring and grim winter.

high street.gpx Open full screen  NB: Walkhighlands is not responsible for the accuracy of gpx files in users posts
Ignoring the ‘Road Closed’ signs that blocked the road to Mardale Head (it’s a long way to go to give up! But the signs might be truer soon, as there is some pretty heavy machinery on the route that even now takes a bit of getting past) grants what may be a very rare parking spot in the tiny carpark there. The shore path leads easily to the foot of the Rough Crag / Long Stile ridge, which is a terrific steep route up to the summit of High Street, great views all round and a constantly interesting traverse of mildly exposed fellside paths and little rocky half-scrambles. The summit area itself seems a little bland afterwards, a broad flat expanse with a little too much ‘foreground’ blocking the views west to Lakeland – it’s easier to believe the idea of this as a former racecourse once on top (even if the horses definitely didn’t get up there over Rough Crag…!). 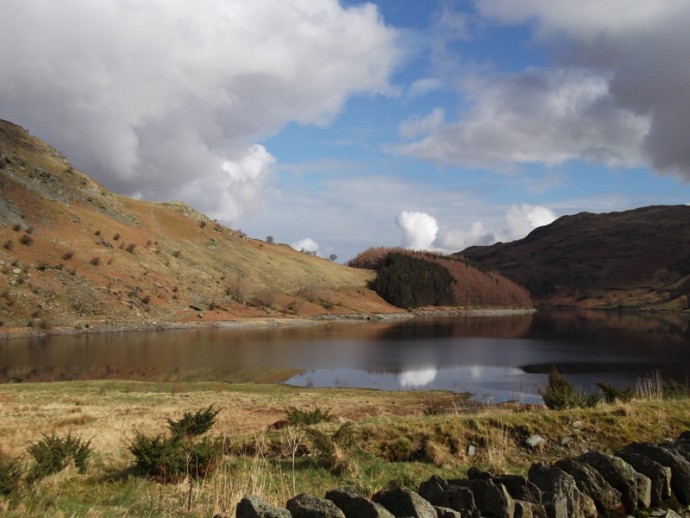 Southern Haweswater and The Rigg The route from High Street over Mardale Ill Bell and the Nan Bield Pass to Harter Fell is extremely well-pathed, stone-steps making light work of the steeper ups and downs and something close to gravel leading over the flatter parts. Probably very easy going most days, and clearly very popular, but made quite tough today by a fierce and lasting hailstorm that made those stones quite treacherous underfoot. Teeth gritted, hood up, camera buried, and by the summit there was just enough clear sky blowing slowly in to make the short there-and-back to ‘bag’ Kentmere Pike not seem too foolish. In truth, this isn’t the most distinguished of hills and the route between is marshy and a little nondescript – the more thoughtful probably include it in a Kentmere horseshoe and only have to tread that ground once… Ridge to Harter Fell through the storm Back on Harter Fell a second time, the skies opened again, this time for a burst of snow that had seemed a world away in shirtsleeves in the valley a couple of hours before. Another good path leads down to the Gatescarth Pass, where – painful as it is to cut short a planned walk – the sight of a forbidding and insurpassable-looking bog at the foot of Branstree and the thought of two moorland peaks after a heavy downpour started to send me off down the obvious path down to the start. But a few hundred yards that way reveals a decent enough tread cutting back up to the top, and nothing afterwards looks quite as bad as that initial prospect… Branstree and Selside Pike are undramatic but nice enough little rounded hills, with a surprisingly clear track leading over them and down the vague north ridge – keep looking left for the great views of Mardale (in between watching your steps in the boggier stretches) and it’s quite a pleasant way to wind down. Branstree at the end of the rainbow... 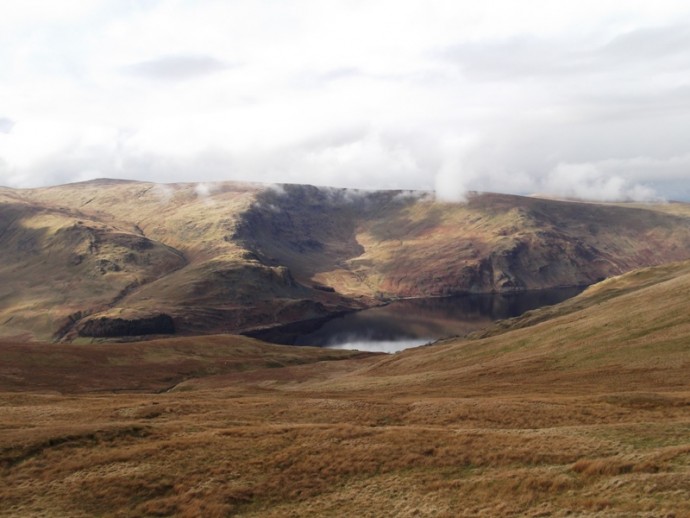 Swindale from descent of Selside Pike Riggindale from the Old Corpse Road Rough Crag and Mardale Head from ruin on the OCR

Back in the valley, having descended west past some handsome falls on the grassy Old Coach Road, the shore path back to Mardale Head seems a little undulating and awkward at the end of a day, but the stunning views over Haweswater – the low angle and still water making for some lovely reflections – more than compensate. The Rigg and Kidsty Pike over Haweswater A ‘walk of two halves’ perhaps, especially underfoot – 7 miles or so up to High Street and around to Harter Fell before descending would be a really good shorter walk, the later three hills being ones that might be visited a little less frequently – but still a wonderful appetiser to what might hopefully be many more Lakes days this year…

Another beautiful epic P, with some picture postcard shots along the way. Incredible difference between the start/middle & end but that's what makes hillwalking so great I guess

What a superb walk!! Great pics and really enjoyed reading the report!

A great walk with some fantastic photos

poppiesrara wrote:The shore path leads easily to the foot of the Rough Crag / Long Stile ridge, which is a terrific steep route up to the summit of High Street,

I love that part of the route

Perhaps my favourite part of the Lakes. Love the long stile ridge over Rough Crag

Thanks, everyone! Really enjoyed this one, and I think - after a few months away from areas like this perhaps... that even the Branstree/Selside loop alone would be a really decent little walk. It isn't flattered by what goes before though.

Glad to see that the Rough Crag approach has a bit of popularity - I haven't seen it described too much and it was absolutely deserted on Saturday, although there were plenty trudging through the conditions around M Ill Bell/Harter Fell...

Nice mixed bag of weather!! Like you say, makes the day a bit more interesting!

Interesting route choice too... I did effectively a horseshoe to get Selside Pike and Branstree, crossing over to do Harter Fell, Kentmere Pike and Shipman Knotts (from Sadgill). Mainly because I couldn't afford the petrol round to where you started! haha

Those later fells can be boggy as hell as I think you found out - do them first next time! Althoguh that would mean you had to descend not ascend Rough Crag which is a fantastic route