A fairly late decision to go to the hills.
With the weather looking good for the East, the Cairngorms were again selected and the Munros from the Spittal of Glen Shee looked ideal. I could be there in a couple of hours and not have a long journey home afterwards.
The target for 2 could also be extended to 3 taking in Beinn Iutharn Mhor if time allowed as it seemed a natural extension of the route.

I left Glasgow at 06:00 and was parked up by the Dalmunzie Hotel by 08:00. They were very friendly, enquiring after my route and requesting an emergency contact number. The offer of tea after the walk sounded like a good proposition after a long walk.

I had a quick chat with a guy that was there earlier and heading off on the same route as I was getting prepared. The clear skies was an unusual sight to be starting a walk, I don’t think the sun has shined, in the west anyway, for months. I was off at 08:15

Helpful signs lead around the back of some buildings and directly onto the track bed of the old light railway. It was a nice easy walk in the sunshine, although my hands were feeling the cold in a light breeze. Gaining height slowly the views along the glen were fantastic and a couple of Ravens and some grouse were seen. Gaining height on the railway

Eventually the ruined lodge appears at the end of the railway and a bridge over a stream leads to the hillside track. Footbridge to gain the hill track

Although a bit of a scar on the hill it was nice to be able to walk along enjoying the views opening up without concern of direction. Looking back down Glen Lochsie It seemed to take an age getting to the point marked by a couple of small cairns where the last few metres to the summit started. The trig point comes into view and a little over 2 hours saw the first hill of the day achieved. Over to Carn an Righ Loch nan Eun with An Socach behind

The views to Beinn A’ Ghlo were fabulous and also across to Carn of Claise and Glas Moal etc. I don’t know this area well enough to recognise many but to be able to see a panorama such as this was great.
After the obligatory summit shot I was off down the ridge breaking off and heading down the steep but easy heather covered slopes and across Gleann Mor, the route ahead obvious by the scar in the heather. 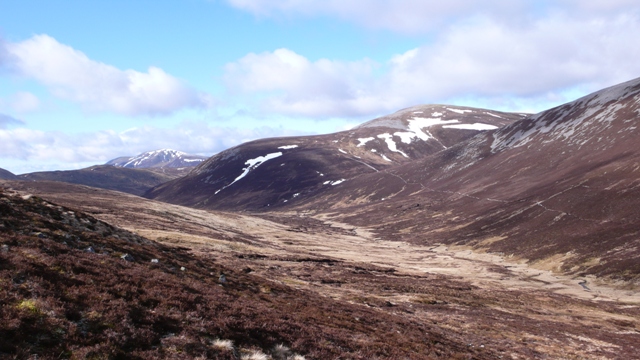 The ground was surprisingly dry and easy work was made getting to the path and on towards Carn an Righ. There were numerous kamikaze grouse that would wait until I was on top of them before exploding from the heather with much commotion, leaving me to utter a few expletives and with a raised heart rate.
The climb up to Carn an Righ was hard going, I think the early start and little to eat or drink so far today were taking their toll.
Eventually the summit was made and shelter sought in the lee of the summit cairn, the wind was not too strong but it was quite cold. A brew on the jetboil and a pork pie and pasty later saw me well refreshed. Another walker joined me at the summit and he was pointing out a few of the peaks that were visible. After a short chat I was off and being just after midday I was confident of the 3rd Munro of the day. Heading back off the hill by the ascent route and heading directly up Mam nan Carn from the bealach until a path veers to the left and contours around to the bealach between Mam nan Carn and Beinn Iutharn Mhor. Across to Mam nan Carn

The path disappears after a bit but it easy going up to the start of the slope onto the final Munro. The summit itself is set back and seems to take a while to appear. It was eventually reached a little over an hour after leaving the summit of Carn an Righ.
It was very cold here in the wind and clouds were starting to build up. Some more intake of fluids and food, admiring the views and a rest before heading off again. The views into the Larig Ghru with the Devils point et al was stunning, can’t wait to get up there. The route off had me re-tracing the way up until the bealach before Mam nan Carn and then contouring the back of the hill until the dip between this and Beinn Iutharn Bheag is reached. Contouring the back of Mam nan Carn Descent route down to the loch

From here there is an easy drop down to Loch nan Eun. This is a beautiful spot with the sun making the grass very green and the water reflecting the blue of the sky, I could have stayed for hours. Loch nan Eun with An Socach in shadow Towards to outflow of the loch and Gleann Taitneach

I Worked around the Loch, missing as much of the peat bog as possible, to the opposite side where the outflow starts the Allt Easgaidh into Gleann Taitneach and the route back to the car. Start of the descent into Gleann Taitneach

The Descent by the waterfalls was delightful and the view down the glen magestic, this helped to some degree take my mind off sore knees.
It is a long walk back to the hotel but once down to the glen it is easy walking. The clouds built up and an odd shower passed over but not enough to put the damper on a great day in the hills.

I was back at the car at 16:15 and enjoyed a pot of tea in the hotel whilst reading a history of the light railway. Again the people here were very friendly and interested in my day.

Looks a good day out Steve , i`m hoping to do these 3 later this week - all going well .

Very interesting report with excellent photos showing tremendous views. At the present stage of my walking career, heading into my late 60's, I'm looking for some reasonably straightforward ascents without having to worry about narrow,rocky ridges, plunging drops and nasty surprises round the next corner. A good,clear path on such routes is the perfect relaxer for me. So I noted the track up to Glas Tulaichean and your route afterwards with considerable interest The country around the Glenshee area and the Cairngorms are in my view somewhat under-rated;they afford some brilliant walks and plenty of quietness. I did the Munro,Carn a' Mhaim, which faces the Devil's Point across the Lairig Ghru, last July. The view was stupendous. I hope you get to do the Devil's point before too long and that you have the same weather as you did on the walk you described so you can fully appreciate the mountain panoramas to it and from it.

Great photos Steve .When i did Carn an Righ I was I couldnt see 10 ft so nice to see what the view was actually like

steven65
Thanks. It was a good day, I hope you get the weather I did when you go up there.

JGKES
You will enjoy this route, there is nothing to be concerned about on any of it. I agree with you, once away from the Skiing detritus the walking around this area is tremendous. Hope to get up the Larig Ghru at some point this year.

soapy 27
Thanks. The views were great, makes a change to get them!

It is a lovely day out especially when you goe great views. i done them last month in the snow and mist the path that takes you to Beinn Iutharn Mhor so had to climb Mam nan Carn east slop not good

and they are excellent at the hotel