our_route.gpx Open full screen  NB: Walkhighlands is not responsible for the accuracy of gpx files in users posts
Well, what shall we do tomorrow then? So we discussed in our salubrious Travelodge family room (but at £52 for 2 nights total, can't complain).

Me and Mark had travelled up on the Friday for a weekend on the hills, we had vague plans but nothing definite. I suggested Snowdon via the Y Cribau ridge then Crib Coch if we fancied it. Mark hadn't heard of Y Cribau, I told him I'd seen it in the Snowdonia scrambles book. We both have the book but neither of us had brought it along, typical! So Mark looked it up on the interweb to see for himself. "One look and I turned back", "the hardest scramble I've done". These and other negative quotes wafted over to me, Mark didn't seem to be convinced.

But 8 a.m. saw us at the Pen Y Pass car park where I nearly died with the shock of a £10 charge. Oh well, we must be about to get our money's worth somehow. We set out along the Miners's track in bright and promising weather, hardly like February, in fact we'd hoped for snow on the hills and had brought the gear just in case (I've only just spotted Rekrab's superb report of the ridge from a week earlier - the change in such a short time is incredible). The track is a great approach and was a fine warm up as we ambled along. We complained bitterly about the potholes, surely these could be seen to within our £10 charge, otherwise we may trip or, worse, get our feet wet. It was very warm in the sun but cloud was shrouding the summit of Snowdon. After around 45 minutes a good view of the ridge came into sight. We cossed the stream at Glaslyn's outlet and started up the ridge. The interesting section is the steeper, rocky 2nd half. The rock was dry and a delight to climb, we made the most of it. There are a few options and the only slightly tricky part was climbing up from a ledge where handholds had to be found amongst the vegetation - but they were there. this route not obligatory The view from the top, to the east, was superb, taking in Llyn Llydaw and Crib Goch. We were lucky with this weather! There is then a pleasant walk south west across a grassy plateau followed by a trudge up the stony Watkin Path. Near the top and just below the cloudbase, was a forlorn remaining patch of snow, probably the last of the winter boo hoo! We were in the clag now but the hard and unmistakable outline of the summit building loomed out of the mist. It was windy and surprisingly cold up here, in great contrast to our approach route from the sheltered east. Up the staircase (yes really) to the trig point, round it then down the other staircase. In summer, perhaps there's an orderly one way system in operation? Rime ice was forming on the rocks and trig point and the few hardy souls about weren't staying for long - neither did we! We headed off to the north and stopped just below the cloud for a quick round of refreshment in a slightly sheltered spot. The droves were arriving and we could see rakes of folk coming up the Pyg track, some were in for a shock with the cold I reckon. We scooted off and had our heads in the cloud again at the summit of Crib y Ddysgl. As we moved east, toward the start of the narrows, we were below cloud and in the sun again - fantastic! It was much warmer here too, out of the cutting wind. There was a wonderful view down to our ridge of ascent. There's a good bit of scrambling to be had on this narrow section, even before Crib Goch proper is reached. We mostly kept to the high road and passed a few people who were going the wrong way. We had a bit of fun on the downclimb toward the bwlch, with Crib Goch looming ahead. We stopped for a couple of minutes at the bwlch, before the first of the pinnacles we'd be tackling. Over the top of each for us, with the warm dry rock being superb. Along the way we met two types on their outing - one group totally unequipped who would suffer later with the cold, and a chap who'd dragged his lady with him, the poor girl was so scared she was progressing almost seated and shuffled like a crab. They were also going the wrong way. 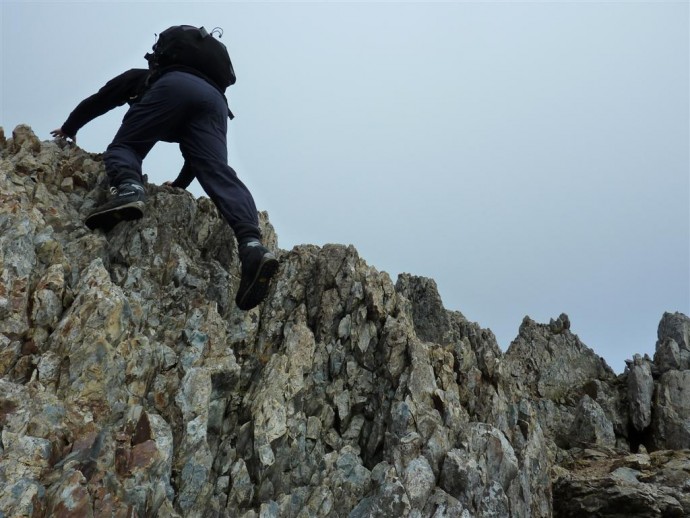 All too soon we were at the end, with the descent of the east ridge ahead of us. I reminded Mark that this is better in ascent, and that it might be a pain in descent. But apart from a bit of nasty ground at the top it was huge fun, finishing with a nice few problems to deal with on the rocky nose at the bottom of the ridge. And so back to base to write a letter of complaint to the local council about the potholes.

Nice report Yoke, and you managed to get some great pictures...am amazed the snow has gone already!!

Great stuff Yokehead, glad to see some of that route is not obligatory

, in reality looks like great fun (I can't remember what rocks look like...all I see over here is white and getting whiter

)some really great photos among these - stunners

Excellent report, I haven't done Y Cribau yet. Looks a fun alternative to the horseshoe.

Great report, must get up that way soon.
I hope I get the views you did, looks stunning, if a bit scary.

This goes nicely with Rekrab's recent winter report on the same. Might do this again sometime.