....But I did see some mountain hare, Heelan Coos, sheep and a family of mountain goats though!!!!!!

I hadn’t planned to do this hill this weekend. Originally I had expected to be back in the Cairngorms, but the need to get a bit of variety decided me to head to the northwest highlands. My plan had been to head along Glen Carron and pick a couple of hills off in an area I’d never walked before (it’s a place that evokes many memories of the “old man” though, having driven around these parts with him many times as a boy

I’d toyed with the idea of driving up the A9 and then heading across country east to west. Instead though I’d taken the, perhaps, slower route up the A82, as I hadn’t been that way for weeks. First mistake. I discovered the road up over Stromeferry was closed and the diversion was via Drumnadrochit

I could have changed my route sooner. But I was where I was and couldn’t be a***d with turning round at that point, so decided to revert to a fall back option – Beinn Fhada, tucked in behind the Five Sisters of Kintail.

At this point I should perhaps apologise to all the walkhighlanders heading up to Kintail soon for the spring meet. I hope you don’t mind me posting my report of this hill so close to your trip to this area. I hope though that it acts as a taster of the delights you all have to come your way

Second mistake. I discovered I had left the lithium battery to my usual camera in its charger at home. Fortunately I did have a fall back camera in my pack that runs of AA batteries. It doesn’t deliver the greatest of photos, but at least it would give me some evidence of my trip for the record

I wasn’t sure what juice, if any was left in the batteries I did have, so it was a slightly irritated “me” that headed off having parked up at the MRT buildings in Morvich

I did have the i-phone as back up, but power seems to drain from that device simply by just looking at it

A short walk along the private road and then I was following the signpost for the Falls of Glomach, although they will be left for another day when I return to pick off A’ Glas-bheinn

From this point onward it was an excellent stalkers path all the way, pretty much to the top

I’d say it was one of the best paths I’ve been on. Never too steep and when it was steep(ish) it was never for too long

It just enabled good progress to be made, without sweating like a pig or too much huffing and puffing on my part

And to top it all the weather was way better than I had expected, based on the MWIS forecast

When I’d parked up it was predominantly clear skies and while the cloud had increased there was still blue sky a-plenty and lots of warm spring sunshine. When the cloud did hide the sun it was then @!&$ cold

The path heads up into Gleann Choinneachain, but before then at a wooden post for the Falls of Glomach I headed off on the right fork and up toward the saddle Bealach an Sgairne. Still easy walking and after a short time I was stopping for a brief rest at a crossing of the Allt a Choire Chaoil, admiring the impressive waterfall there A little further on and I arrived at another fork in the path. Straight ahead went over the saddle toward Glen Affric (this would be my return route), while to my right headed up into Coire an Sgairne and eventually to the final push to the summit of Beinn Fhada

By now I was getting excited. I’d had the Faradh Nighean Fhearchair on my right hand side all the way, and then Creag Coire an Sgairne had come into view. Now I could see the craggy Meall an Fhuarain Mhoir poking out between the two 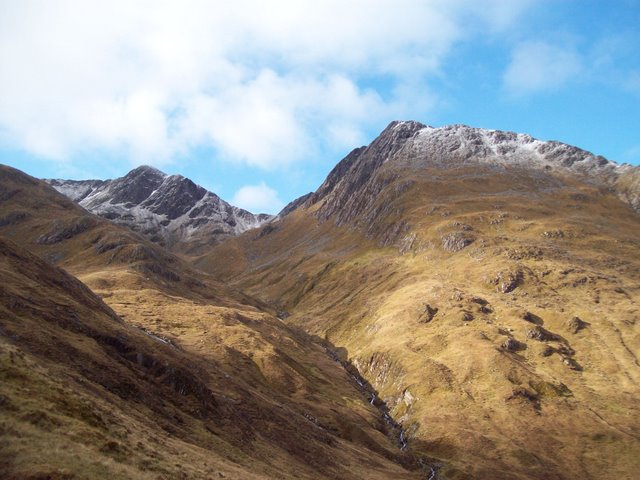 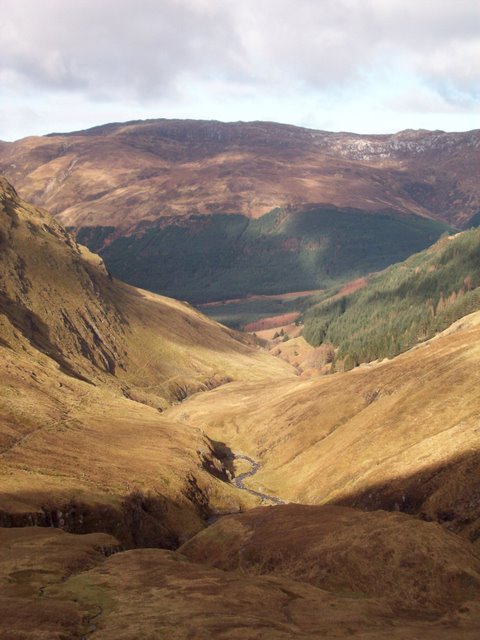 View of the route I'd taken

Looked even better with the sprinkling of snow on it too The excellent path continued to wind its way up to the left handside of the Coire, zigging and zagging to gain height. There were a few patches where the path was iced up with water running down in the freeze/thaw cycles, but I was able to by-pass them no bother. And eventually I was on the final push to the summit. Ahead of me I could see the summit trig pointing up, while behind me I could see the bit of the ridge I hadn’t done coming along from Meall an Fhuarain Mhoir. All looking good so far Looking toward the summit

Arriving at the summit (well, on the way to it as well) the views were just opening up before me. Standing at the trig point I had brothers

I had the rest of Kintail to the east

I had glen Affric 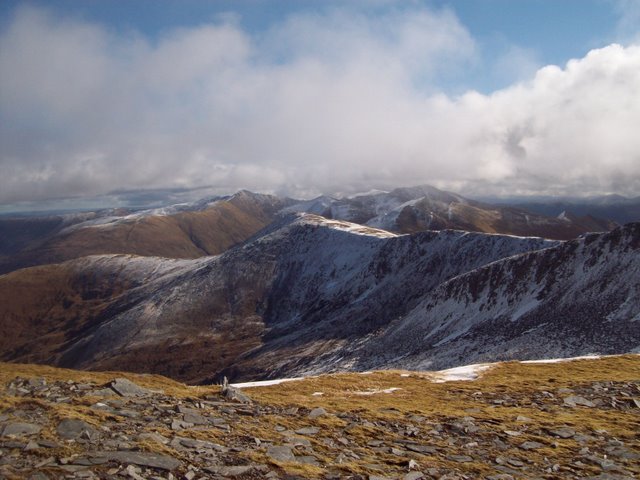 The Fhada ridge route down 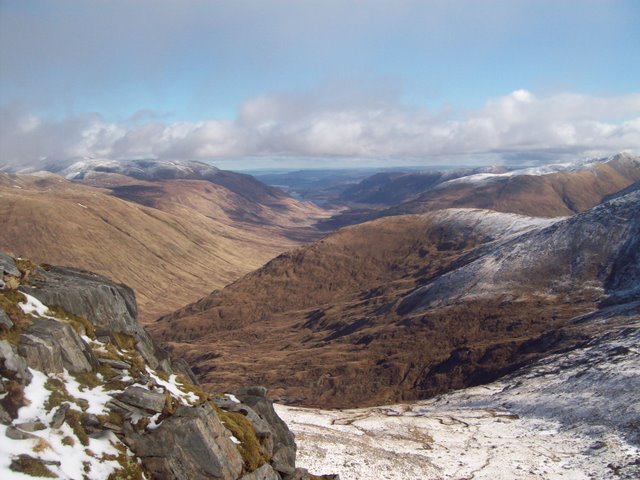 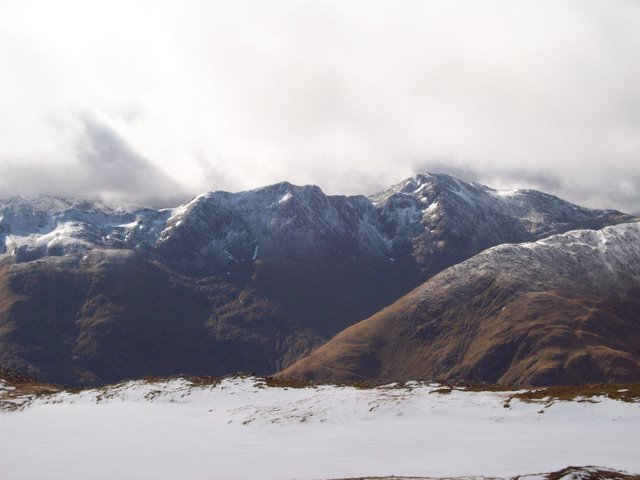 I couldn’t believe what a great vantage point this was

I don’t think there was a single bad view, and had it been completely cloud free then my guess is it would be even better

And I had all this to myself

Not another soul about

And there ahead of me to the east was my descent route, following the Fhada ridge to Sgurr a Dubh Doire and then down toward the Allt Gleann Gniomhaidh, Loch a Bhealaich and back over the Bealach an Sgairne into Gleann Choinneachain

There is a good path along the full length – sometimes hugging the cliff edge and at others moving away on to the top of the ridge. As far as I was concerned the path was just there to give an idea of the direction of travel. I was enjoying myself traipsing all over the place

I walked as slowly as I could, soaking up the ever expanding and improving views. I was particularly impressed with the view of Ciste Dhubh, A’ Chralaig and Mullach Fraoch-choire directly ahead View back to the Fhada summit Enjoyed a brief snow shower as I arrived at the foot of the gentle climb up to Sgurr a’Dubh Doire, but that didn’t matter. The cloud cleared by the time I had arrived at the cairned top and I could see the impressive, steep, descent down to where the ridge divided. This section was great fun, with the remainder of the snow blotting out any sign of a path down. I chose my own route down, picking my way through boulders and rock At this point my camera, which had held out magnificently, decided I had sucked all the juice out of the batteries and so gave up the ghost. From now on it was down to my i-phone to capture the images

At the divide in the ridge I took the left hand arm, which doubled back toward Loch a’Bhealaich. Any trace of a path was lost on me, but I enjoyed picking my way down. The ground was soft, so any knee crunching was avoided 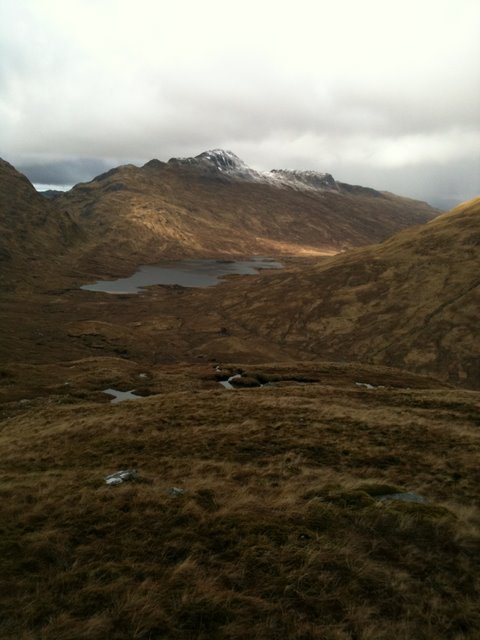 As I forded the Allt Gleann Gniomhaidh I could feel a few drops of rain. Given that cloud had come and gone all day I fully expected this to be no more than a 5 minute shower, so didn’t stop to don my waterproof troosers. Wrong

So I got a soaking I could have happily stayed longer, but thought it best to keep going. Looking at the path up onto the Bealach an Sgairne I thought it looked steep, but as had been the case all day so far it was a doddle – picking it’s way nicely up to the high point. View down from the Bealach an Sgairne


Great views back and front and then I was heading across the saddle to pick up the path from earlier in the day and get back to the car. I was no less impressed with the path on the way down. About 15 minutes from the car another shower passed over and again I made the mistake of thinking it would be a quick shower. Stair rods

With pulses of really, really heavy rain too

Having just started to dry out from earlier my legs were soaked again (I don’t know why I carry my waterproof troosers, as I rarely use them).

Not the hill I had originally chosen, but it had more than delivered on my expectations

I’d felt a little unprepared for it, but with excellent paths it was an easy one to tick off the list

They clearly didn’t know what they were missing

A great read as always Pete and some lovely shots with your back up camera, I feel I should point out something though - its the waterproof trooos that control the rain, if you faff about getting them out of the bag and putting them on the rain stops, if you don't it doesn't

Spectacular views all the way through here, really enjoyable

A cracking report Peter. Looking forward to getting to this part of the country. Loved the East glen shiel pic with the blue sky in the background and dark skies in the fore.

I don't think the pictures have suffered with the back up, I would be happy with them. Good to see what this one looks like too. Good walk.

PeterR wrote :
I don’t think there was a single bad view

A point well made

You certainly ' won a watch' picking Fhada for your walk

This was my 200th Munro, and my mate Doogzs' 150th, on the same day- between us we must have took 400 odd photos, also, met Astronick on the way down.

PeteR wrote:At this point I should perhaps apologise to all the walkhighlanders heading up to Kintail soon for the spring meet. I hope you don’t mind me posting my report of this hill so close to your trip to this area.

Not at all Pete - just whets the appetite even more. I think it'll be the Sisters for me - nice to get a wee sneak preview.

Another fine report Pete, you're fairly cracking on and doing some travelling

. I saw nothing but clag when i was up this one

What a wonderful day, despite the showers. Some fantastic photos with the backup camera and iphone. Amazing views

could you do us a lovely map of the route you took? Please?

Excellent PeteR,
Just the report we needed prior to our trip up there a week Friday. Hope we get as clear a day.

,myself ,ian ,charlie are up this way in early May,got 3 days to spend there so could well try this one out,

Crackin report and pics - what a day. Excellent.