The morning weather wasn't looking too great with gales, and heavy rain. I thought "Here I go again, munros a la nada vista ". I couldn't remember the last time i had a good view from a munro, and when you travel up from the south it does get a tad annoying. Still as I was here.....

This walk started at the western edge of Loch Droma (253754) just off the A835 towards Ullapool. A small car park is right at the edge of the loch. From there we walked over the reservoir to pick up a good track heading west following a large water pipe and pump station. Start of walk at Loch Droma The track follows the Allt a' Mhadaidh crossing it over a bridge after 2km or so. The vehicle track pettered away into nothingness, and we were left trudging over a boggy quagmaire in miserable conditions.There were several streams that required crossing, which proved rather tricky given the wet conditions. After some careful negotiation we eventually reached Loch a' Mhadaidh after about 1.5hrs. By this time, the snow had arrived to brighten our spirits

We got a view of the ridge above the Loch, and the route up to the col we were heading for looked intimidating. Given that we had left crampons/ice axe behind, thinking there would be no challenging snow, at least we would all be in the same boat! Our intended route up the the col !! We went round the north of the loch and kept to the right of the route up to the col between Meall a' Chrasgaidh, and Carn na Criche. A small gully is noticeable (see above in the far right), keeping to the right of this wasnt too bad. (it looks worse than it was). Although it was steep and slushy, taking it slow and steady we reached the col just before 12. The steep ascent up to the col Is this clag or what!

At this stage the weather was starting to tease us with some blue sky. Although cold and windy, we could do with a break with the weather. As we started our first ascent up to Meall a' Chrasgaidh, the clouds started to break open, and by the time we reached the easy climb to the top we were blessed with fantastic views of the surrounding hills. As myself and a mate had packed away our DSLR for moments like this we were like kids in a sweet shop! Views of Sgurr Breac from Meall a chrasgaidh #1 Views of Sgurr Breac from Meall a chrasgaidh #2 Dundonnell Hills in the distance

After 10 mins of clicking we descended the way we climbed back to the col and had some well-deserved lunch. It was rather pleasant and we thought we were going to be treated to better weather. After a few sarnies, and hot chocolate, it was time to climb our 2nd munro, Sgurr Mor, with the wee challenge of Carn na criche in between. Carn na criche in foreground, with Sgurr Mor peaking its head over in the back The saddle up to carn na criche was easy going, with no real difficulty. Coming off it the climb up to Sgurr mor looked steep and rocky. At that point the weather came in again, and we were hit with a snow blizzard. there was nothing for it but to 'down hatches' and begin the steep short ascent up sgurr Mor. Although not exposed, it did involve some steep climbs on rocky boulders for about 200m climb. The top was right at the edge of its cliffed eastern face. We knew it was there but could see sod all! Care and attention was required to ensure we stayed away from this edge, in the snow storm. Top of Sgur Mor cliff (I think anyway from what I could see!)

Taking a bearing South for 50 m and then East, and we were descending down safely. Eventually we were under the storm, and on the relatively easy walk to the final munro of the day, Beinn Liath Mhor Fannaich. Even in the snow, there was a noticable stalker track contouring up its NW face. At this point any assistance was appreciated. When the track started to descend it was time to just start climbing up. Before long, we reached the top, and again the weather was kind to us. Another chance to practice our DSLR skills and sing a few paddy songs for st paddy's day! 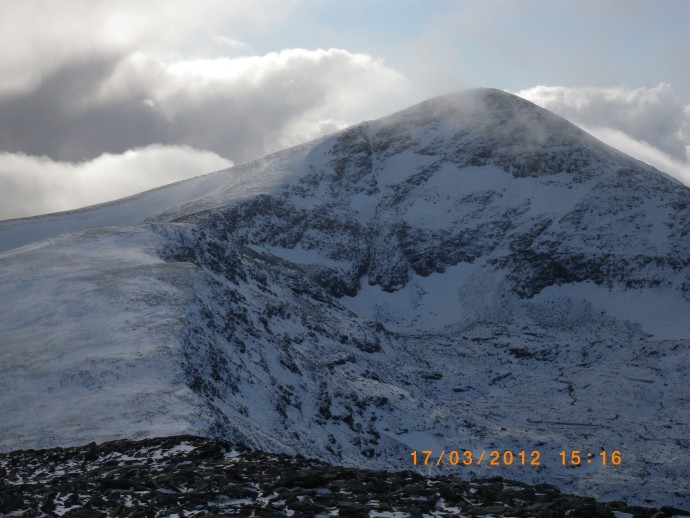 Sgurr Mor from the top Looking back on the hills we climbed 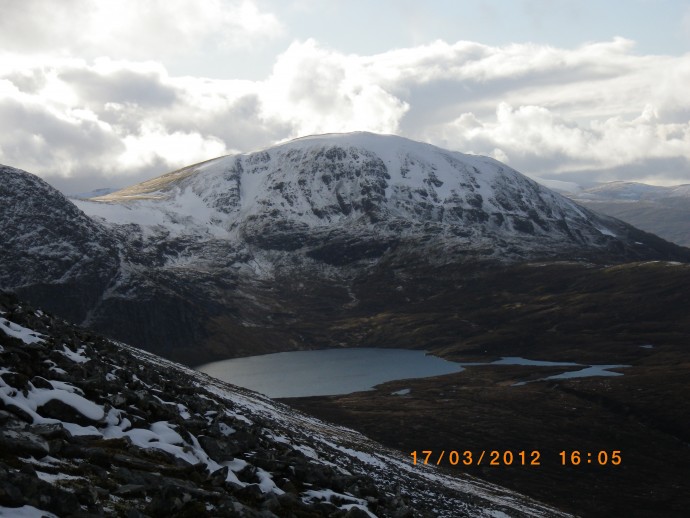 There's something satisfying seeing what you climbed up a few hours earlier. Above shows the loch and our wee climb up to the col.
We could see the weather system hitting An Teallach in the distance, and were thanking our lucky stars we wernt under it! After another well deserved break, when the shivers stared coming it was my body's way of telling me to get up off my a*se and head down. It was quite striking the difference in the colours, from the white snow high up to the browns beneath us, marking the last days of winter. Taking in as much of the view as possible we headed NE. Again this was tricky in places with boulders and tricky footing required in several places. in bad weather its also important to realise that there is a cliff at around 750m on the NE face. Several large cairns mark this but its always good to be aware. The decent from here is North down the rather steep boulder section. We headed back to the track and back to the car park. All-in-all it took 9.5 hrs to climb the 3 munros, and a rather exhilarating days which turned out exceedingly better than I had hoped! Once again, weather forecasts are not the be-all, end-all!

Lovely. so glad you got the views. Don't you think the ones that tease you from behind the clouds are often the best!

Allways good to see reports on the Fannichs. I did your route in reverse last year and like yourselves started off in bad weather but it got better as i went and i had a superb day with stunnig views

Yeah, clouds in the sky can give some good photos if they do clear....the trick is waiting for it to happen..if you're lucky enough! Its a good route when you get the views.