These two hills are normally climbed separately from Glencoe and Glen Creran but I decided to combine them by walking in from Invercharnan in Glen Etive. To be honest, given they're shorter walks from the Glen Etive side and the Sgor na h-Ulaidh route is not as steep than from Glencoe, I can't understand why this isn't a more popular route. None of the guide books combines them in this way, for example. However, these shy hills right at the bottom of Glen Etive are not the most popular so paths are intermittent - and there's a 500m descent and re-ascent between them so be prepared for sore legs the next day !

I slept overnight in my camper van in Glen Etive on a cold and starry night. The next day it was a glorious sunny morning and I seriously contemplated taking my sunglasses - but it was that time of year when the weather couldn’t quite decide if it was Spring or still Winter …

A good forestry road leads from Invercharnon. Park just beside the bridge (where the road makes a shart 90 degree turn) and instead of walking past the nearby house, take the forestry track to the rear of the house which joins the track shown on the OS map. 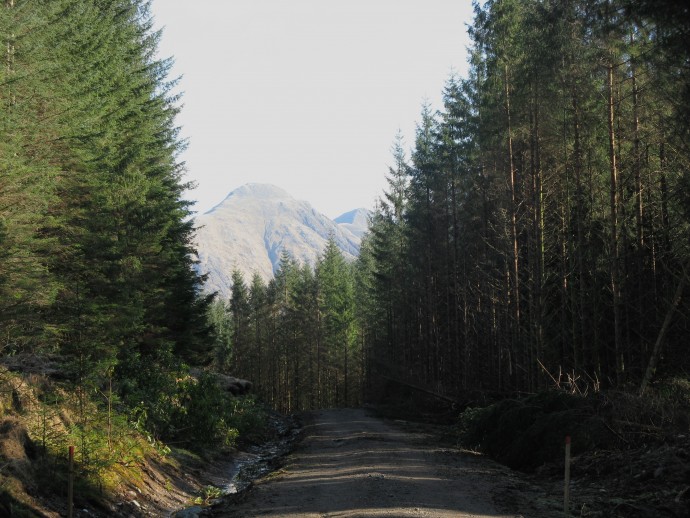 After the severe storms in January literally thousands of trees must have been blown down in the forest here; it was a real eye-opener. On the way back I counted 77 trees down on the road over just a 3km stretch ! In places I had to clamber over, under and round a huge jumble of trees and branches; it was impassable by any bike or vehicle. In March 2012 the Forestry Commission were just working their way up the road to clear it. Once out of the forest Sgor na h-Ulaidh lies straight ahead, with a straightforward climb on an intermittent path up to the bealach then following a steepish ascent of the hill itself (2 hours 50 mins). By now it was almost lunchtime and the sun had given way to a snow shower, and this remained the pattern for the rest of the day. 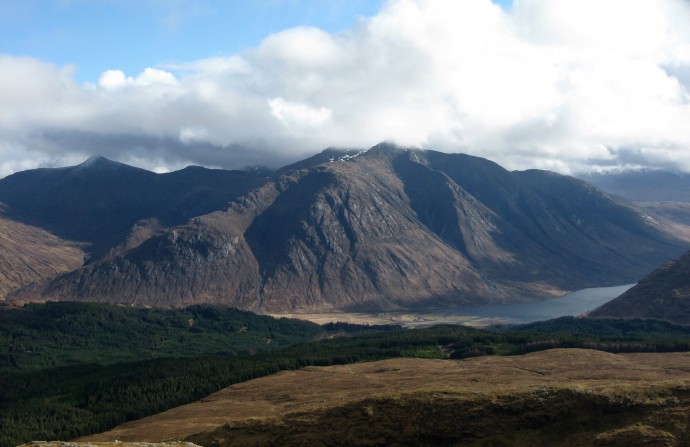 I lunched in the valley between the two hills, and it was a steep climb up to the eastern end of the Beinn Fionnlaidh ridge (the 841m spot height). Note that a direct ascent is too dangerous (steep and rocky). Instead, (see the picture below) take the grassy spur to the left of the steepest part of the ridge and follow a dog-leg right again to meet the ridge just above half-way up. From there you can pick your way through the rocks (and a strange gully) near the top to the eastern end of the ridge. From there it's a straightforward ridge walk ascending to the peak of Beinn Fionnlaidh. 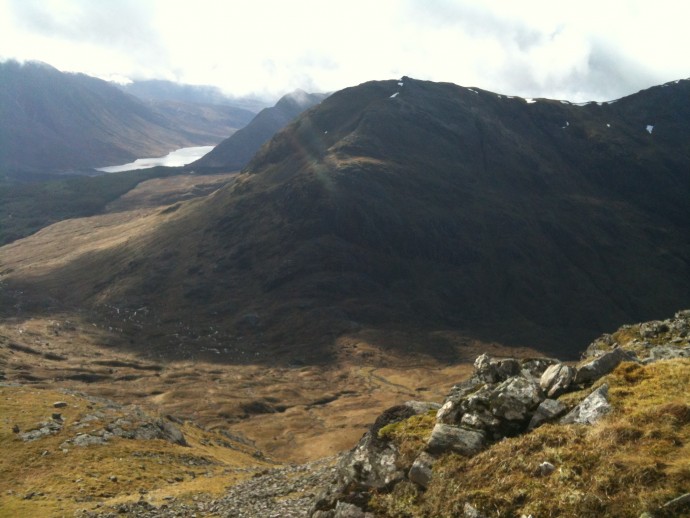 Eastern end of the Beinn Fionnlaidh ridge from the shoulder of Sgor na h-Ulaidh. You should just be able to make out the grassy 'dog-leg' between the rocks to the left of the direct line of ascent. 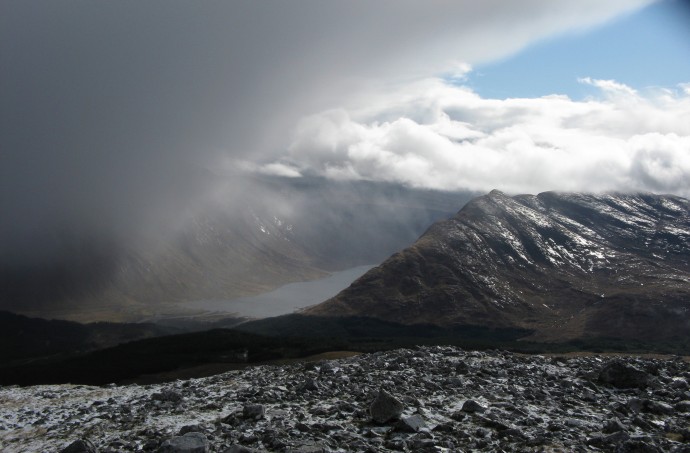 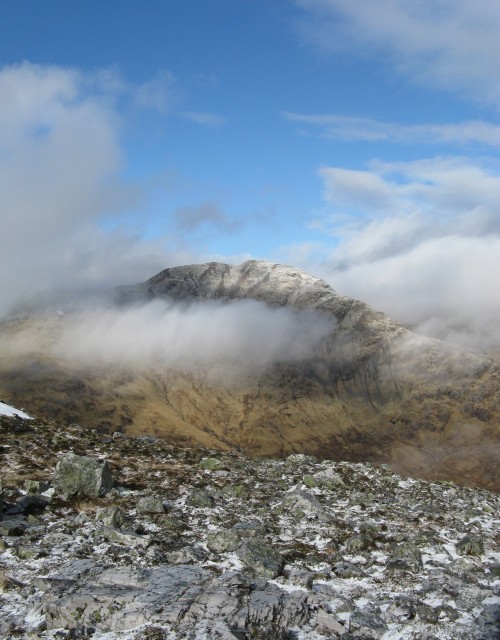 Having not seen a soul all day I met two girls near the summit; these shy hills are overlooked by everyone except munro baggers. To return to the forest track, take a faint path at the lowest point of the Beinn Fionnlaidh ridge. This path skirts the steep eastern end of the ridge and descends to Meall nan Gobhar, when a clearer path heads down to the valley below and the return back to Invercharnan.

Nice one Sgritheall or bust.

nice report and great pics.i walked this 2 weeks ago but took the other track from the car parking area,not the best of ideas as i now know that a clockwise route would have been much better

qouman here is my route-

eitive route.gpx Open full screen  NB: Walkhighlands is not responsible for the accuracy of gpx files in users posts

Thanks for posting up your route, Iain. Not quite sure how to do this but I guess you used a GPS which I didn't have.

My route was anticlockwise - ie Sgor na h-Ulaidh then Beinn Fionnlaidh - but I guess there's not much difference. There's only 2-3km between the hills as the crow flies but the killer is the 500m descent and re-ascent.

You could do all three hills together ... but that's a HUGE walk unless you take a tent and spend a couple of days over it. I really felt my legs after just these two !

Looks nice this will have to bear it in mind.