Ben Chonzie has the reputation of being, um, an "unexciting" hill

:however, not being an experienced winter walker, I reckoned it was plenty exciting enough for me in January.
I was up in Crieff for a very welcome weekend break with a group of old friends, including my usual hillwalking partner in crime Andy C. Unfortunately, however, he had to head home early on the Sunday morning due to family commitments - cursing the missed opportunity of bagging an easy Munro on the doorstep

. Thankfully, Alasdair (who was also part of the group) took pity on me and said he fancied a stoat up Ben Chonzie, despite having bagged it already several years earlier. Alasdair is definitely fitter (and skinnier) than me, and is on fiftysomething Munros to my fairly paltry twentysomething, but he promised to be patient with me... so off we set.
Sunday dawned bright & sunny, but was already a bit blustery even down in Crieff. We eventually found the car park at Loch Turret dam (after a couple of wrong turnings on the distillery road

) and set off around 10:20 a.m. up the excellent path on the east side of the loch. By now it was decidedly blustery, but still clear & sunny, and the hills and loch looked extremely scenic with a good coating of snow. Unfortunately I realised that I'd forgotten my camera, so don't have any photies to show youse at this point

...
The lochside path is an easy & pleasant stroll. Poor Alasdair had to put up with me droning on about mammalian comparative biology and why mice get a millionfold more tumours than elephants, adjusted for weight ... he was understandably starting to glaze over a bit by the time we got to the head of the path at Lochan Uaine and started climbing properly, which thankfully soon shut me up as I started peching up the slope

! Although Lochan Uaine sounds pretty ("Green Lochan"), it is slightly disappointing in reality - "green" probably translates as "shallow & full of algae". The surrounding hills are pretty though, and there is a reasonably clear path heading straight up to the obvious "nick" in the skyline to the west. The path is steep but never an actual scramble.
From the top, at the "nick", it was just a matter of carefully following the fenceline on up the convex slope of Ben Chonzie all the way to the summit. By now there was hard snow underfoot, which proved a bit slippy but not too drastic, and it was blowing a gale although still clear and intermittently sunny. Alasdair did manage to get a couple of pictures of the summit itself, to prove that I had actually managed to haul myself up there: 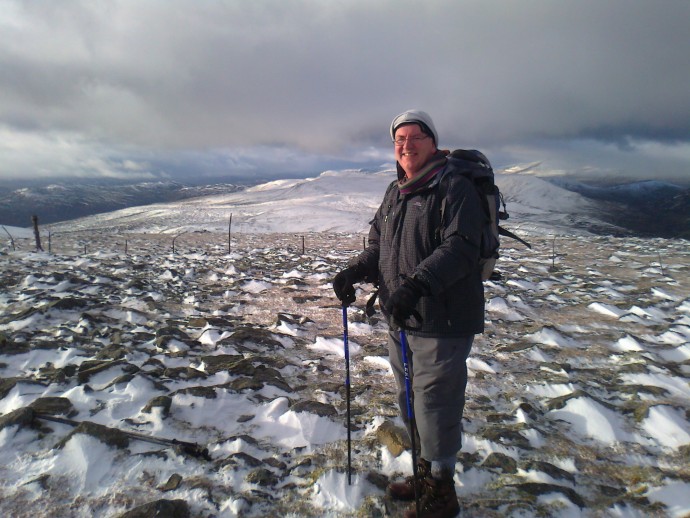 The Lawers range, visible to the north here I think, remained resolutely under cloud all day so it looks like we were very lucky with the weather on Chonzie

.
Here's a photo looking in the other direction: that hat definitely makes me look a bit dysmorphic, but hey, we all have our crosses to bear ... 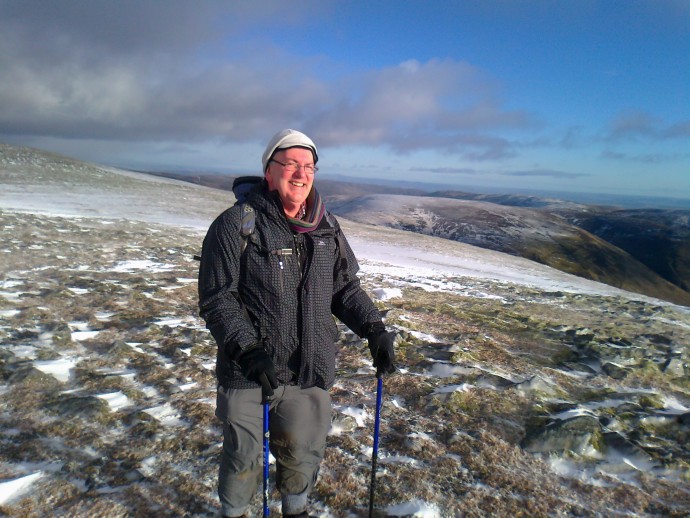 From Ben Chonzie, we then headed off down the ridge on the west side of Loch Turret, over Meall na Seide and then Carn Chois. This part of the walk was really lovely, over deepening snow in the intermittent afternoon sunshine. We saw a whole lot (anyone know the collective noun?) of mountain / "Arctic" hares in their winter raiment - beautiful animals, and bigger than I'd have imagined. We didn't manage to get any photos though, unfortunately. Apparently they're quite common in this area.
We stopped for a quick but welcome bite to eat in a sheltered bit in the bealach between Meall na Seide and Carn Chois. From here, the north side of Carn Chois looked surprisingly craggy: it might have made a fun scramble on a good summer's day, but in the snow we quickly decided that discretion was the greater part of valour and bypassed it on the left (east) side. Several pre-existing sets of footprints suggested that this was the popular decision

.
Having got Carn Chois behind us, it was then a fairly straighforward plod down through the snow on the east side of Beinn Liath, to pick up the path that runs about halfway up the east side of Loch Turret. This gave a scenic stoat back to the dam and the car park.
Despite Chonzie's unpromising reputation, this was a great wee winter walk. Loch Turret itself is actually very scenic, and Chonzie is right bonny in the snow

looks like you enjoyed this hill plus it make's awe the difference in good weather.

Definitely the best way to do this Munro as it (a bit undeservedly) gets no good things written about it from the Comrie
side.

There is always somnethimg to see with plenty wildlife about. I think the snow helped you down the west side as it was very boggy when I did it compensated by almost bumping into two deer as I emerged out of a dip.

Since you ask ... controlling tumours actually requires a lot of energy expenditure at the molecular level. If you are a small, short-lived organism like a mouse, it doesn't make evolutionary sense to expend too much of your "resources" on not getting tumours. However, big long-lived mammals (like elephants) need to put a whole lot of "resources" into tumour prevention or they'd be dead within weeks.
Bet you wish you'd never asked!!

Nice one Kenny,
like the free lesson on murine oncogenesis.

We should meet up for a blether soon.

not at all, very interesting. I like to know things. Amazing what you can learn from a walking site