Last day of a long weekend so decided to tackle Ben Lomond. Another early start from Crianlarich Youth Hostel and a long drive around the bottom of the loch to the Rowardennan car park. The weather was meant to be another glorious
day but all the way to the start I didn't see the summit once because of the clouds.

Started at 08:20. Didn't think I would have as much trouble as I did finding the start of the route. I knew it was a popular route and I was sort of expecting a big arrow saying "This way to Ben Lomond". Have read trossachsgirl's report on Ben Lomond since and the first image shows the sign I missed.

I even asked a local looking chap and he sent me the wrong way! I studied the map again. There is a telephone box directly opposite the Rowardennan Hotel, I went through the gate to the left of this, followed a trail through the ferns and after 5 minutes or so found myself on what looked like the tourist path. It was a bit confusing as my map showed the path going through trees to the left and right, however, there weren't any to the left so I am guessing they have been chopped.

It is a very good path and I soon found myself walking into the clouds. Occasionally there would be a break and I caught a glimpse of the mountain. I didn't see a single person all the way up until very near the top when I saw someone in the distant following me. I wasn't expecting to see much once I got to the summit but about 15 minutes from the top I seemed to pass through the cloud and I was presented with a fantastic blue sky. Took a picture looking over the steep face to the North where there were a few peaks poking through the cloud. Got to the top at 10:35 and took the obligatory trig point/walking pole picture. It was very peaceful being own my own. I took the time to look all round and try to identify the peaks poking through the clouds. I'm not very good at that, I don't know many yet, but I did recognise Beinn Ime from the walk I did two days earlier. I think the cloud was just too high to expose Ben Arthur. I wouldn't really call this a cloud inversion as there were still plenty of big gaps where I could see the loch. I wanted to stay longer than I did but I knew I had a long drive (Bristol) ahead of me so set off after some grub.

I decided to go down the Ptarmigan route as I had heard how good it was. Coming off the summit to the path was quite steep which found me clambering over some rocks but nothing too scarey. Took a picture looking back up once I had got onto a flatter bit. Started meeting a few more people who were going up. Not sure I would have done it this way round as there were quite a few, lenghty steep slopes going down. At one point I saw a shrew/mouse type creature (wildlife isn't my strong point) in the middle of the path and when he saw me he ran to the edge a pretended to be a small stone. The sun was quite strong now. I met a guy with a spade making his way up the path. He had to walk the path clearing
the drainage tracks as recent heavy rain had meant these had filled with mud. I was thinking first of all that he had probably drawn the short straw as this didn't look like a job for a sunny day, however, I did like the view from his office window.

Took another couple of pictures looking down to the loch. 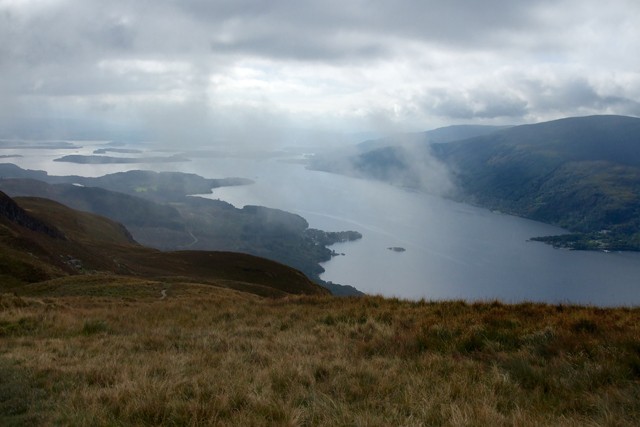 This path was straightforward to follow. Where it joined the road I was expecting to see another sign but there wasn't any. I'm sure it would be another one I would have missed. The path joined the road immediately to the North of Ben Lomond cottage which is just past the Ranger Station.

Easy stroll back to the car which I reached at 12:35. Couldn't resist dipping my hot aching feet in the cold loch.

Lovely pictures, nice one catching one of that creature!