I hesitated about posting this report as there are so many already and Steve B has recently posted one about his walk the day after I did mine.

Nonetheless here it is.

Up the A1, off towards Carter Bar, around Edinburgh, through the road works around the Forth Road Bridge, around Perth and eventually down the drive to the Dalmunzie hotel. A final pack, change and lunch making at the information board a couple of k’s short of the hotel (where cars can be left for free) and then on to the hotel itself. There were already about six cars at the walkers’ car park

As described elsewhere permission to park is readily given and the hotel relieved me very nicely of £2.50 and I was en route at 9.30am. It was overcast but with breaks appearing in the sky. When I got to the ford over the Glen Lochsie Burn my mind could not be bothered to work out how to navigate the boulders and rocks in the river so I took the high road and followed the line of the old railway. 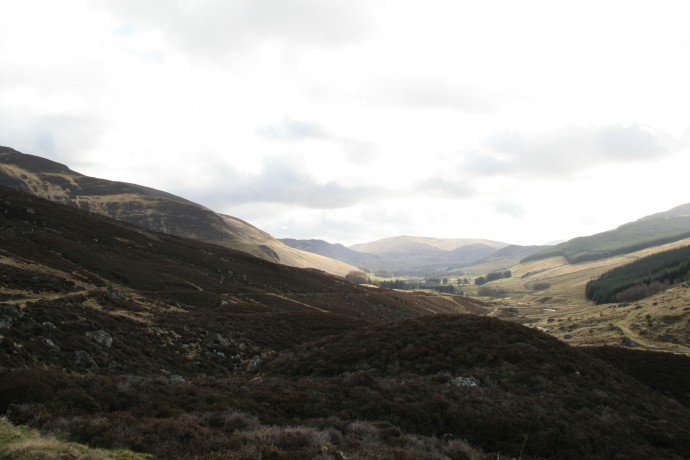 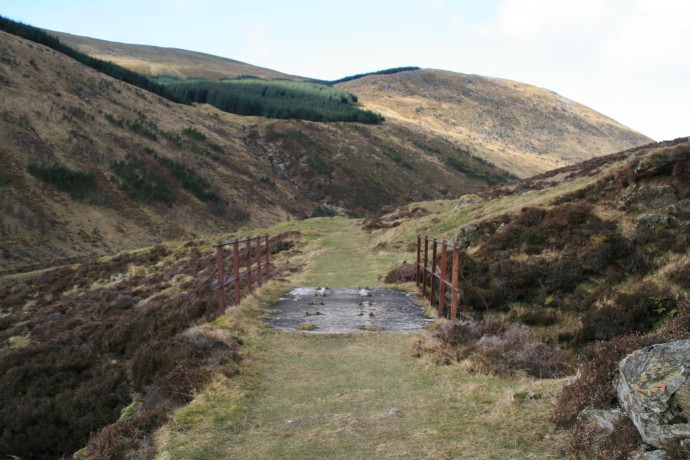 This provided an undemanding incline up to Glenlochsie Lodge which I reached in 45 minutes. 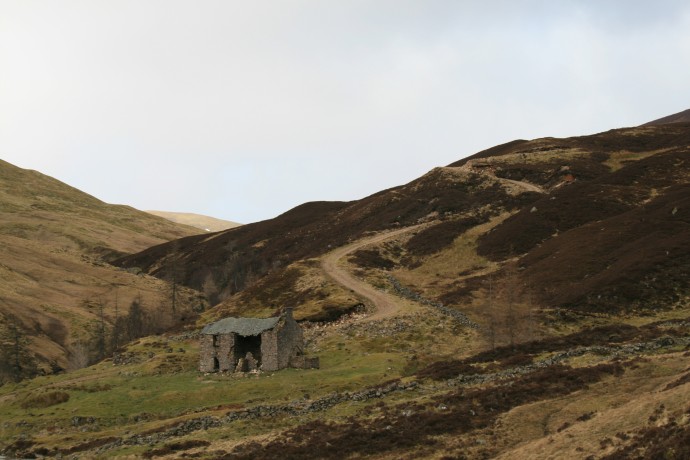 Glen Lochsie Lodge and the beginning of the hill track

As I hit the track up the ridge there was a brief wintery shower. It passed by quickly enough. As height was gained so the wind picked up. Another snow shower arrived.

This one was longer and forced me to put on my cagoule by a cairn that marked a levelling out of the ridge. It was a further 45 minutes to this point.

The shower lasted 20 minutes or so and the upper slopes of Beinn Tulaichean became grey with a partial covering. Views started to open up and Carn an Righ appeared over the ridge. And ahead were the broad summit slopes of Beinn Tulaichean. 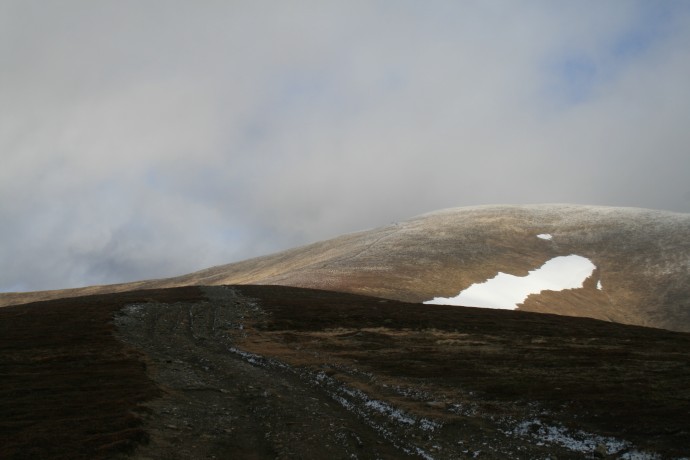 I was on the summit 2 hours after setting off from the hotel. Here is the view to the east. To the north east 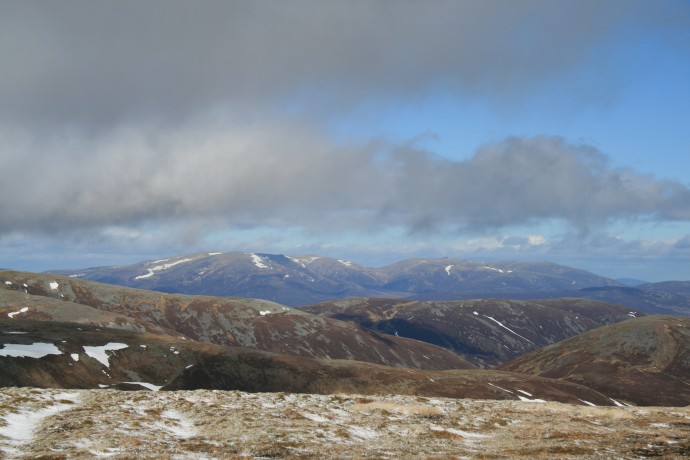 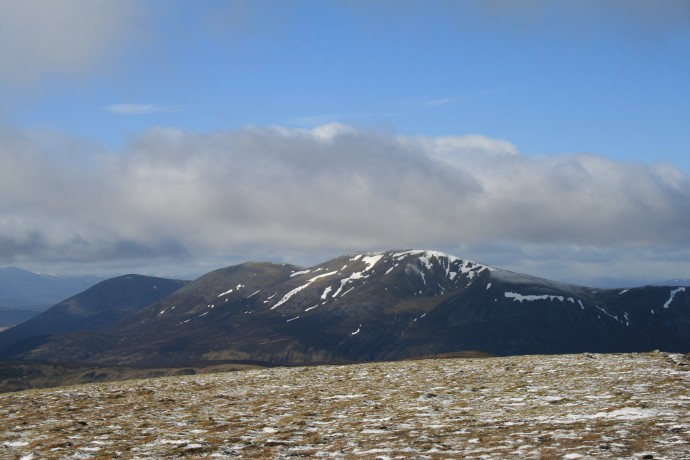 And to Carn an Righ There were a single chap and a twosome already at the top. The wind was chill and did not encourage a long stop. I stuffed some food down me and followed the others down the north ridge.

The single chap carried on down eastwards, whilst I followed the other two north westwards, leaving the ridge well before the 930m spot height. We cut the corner to the path running across the flanks of Mam nan Carn. The stream was easy to step across and soon I was making my way to the col between Mam nan Carn and Carn an Righ.

The climb is straightforward and I was on the top an hour and ten minutes after leaving the summit of Glas Tulaichean. The group with the Labrador were vacating the sheltered side of the cairn as I arrived – most convenient! I settled down out of the wind to look at the views and to eat. Nobody else stayed long at the top. Obviously there was something going on elsewhere. I remained for 20 minutes or so. There was a stunning 360 degree panorama in which Beinn a’Ghlo loomed large. Cairngorms from Carn an Righ Glas Tulaichean from Carn an Righ I varied the descent slightly to take advantage of some snow patches that I was able to run down. Back at the bealach I start up Mam nan Carn but then took a contouring path to the left, shown in the next photo. 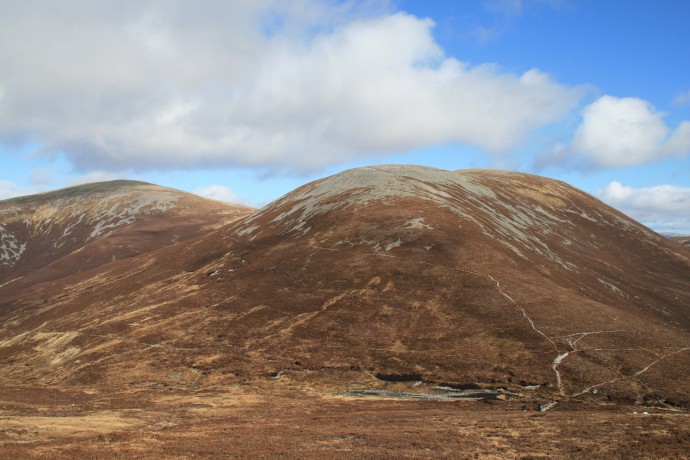 Paths up and around Mam nan Carn

This eventually peters out but it hardly matters because the hillside is not steep and an easy way can be made to col between Mam nan Carn and Beinn Iutharn Mhor. Lack of sleep was now catching up with me and the ascent of Beinn Iutharn Mhor was a bit of a grind. The “Labrador party” passed by again on its way down and we had a further brief chat. The summit duly came about an hour and 20 minutes after leaving Carn an Righ. It was just before 2.30pm.

This mountain also provides a superb viewpoint. There were views down the throat of the Lairig Ghru. To Beinn a’Bhuird and Ben Avon 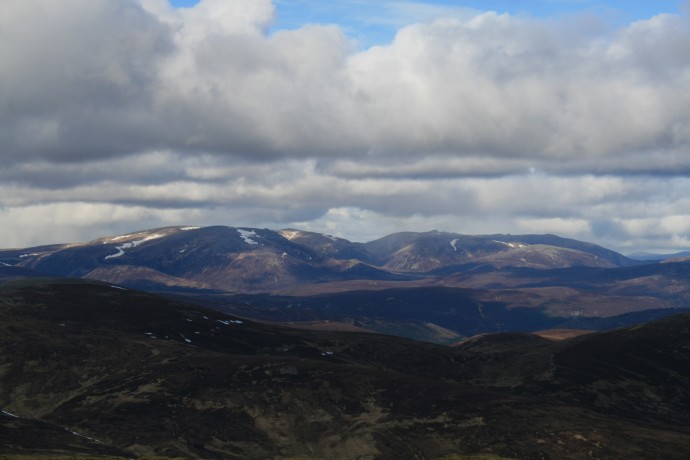 It was a bit of a wrench to have to move. I could have hunkered down behind the cairn for a snooze. But I wanted to finish in the light. So it was back to the bealach with Mam nan Carn where I picked up a track the contoured to the left to just above the low point between Mam nan Carn and Beinn Iutharn Bheag. There was a view from there down on to Loch nan Eun. A path was visible on the other side of some boggy terrain below me. I hopped over the bogs to the path which took me to the outlet of the Loch. 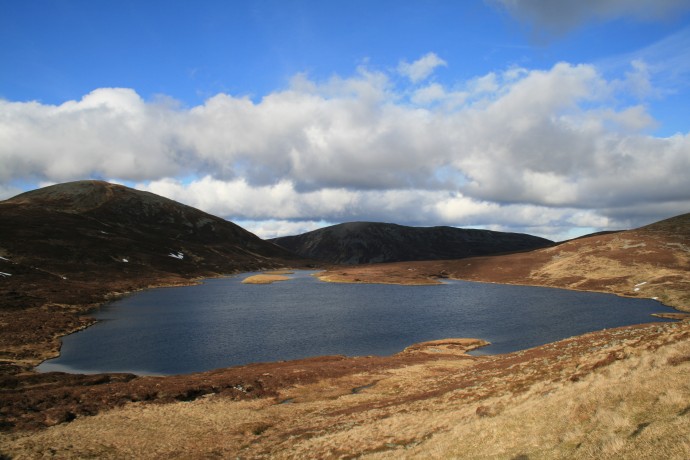 From there, there is a path along the stream. It is surprisingly rough to start with, but once the foot of the glen is reached it is a pleasant, if long, wander along it. 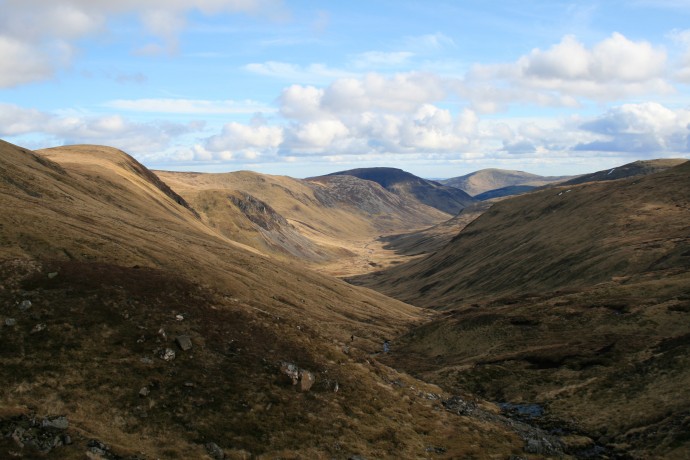 The long miles of Gleann Taitneach

A vehicle track begins on the right bank of the stream lower down, but if this is missed the path continues on the left bank and intercepts the track when it crosses the stream lower down. I passed a couple and caught up with a chap from Kinross with whom I nattered back to the hotel which we reached at about 5.45pm.

fine report and picture Clach. I enjoyed a similar round although bolted on An Socach too. Glen Taitneatch is wonderful.

that's a right early start to get there from Yorkshire!

Good report and some grand pics there Santa baby

That looks a fair old drag CL, but you picked the right weather again and got some great shots along the way

Hi C L,
Looks like you had a day as good as mine. I thought this was a great walk, although the last couple of miles got to be a bit sore on the feet.
I know what you mean about wanting to stay and take in those views.
Cheers,
Steve

Hi C L , i enjoyed your walk report & the foto towards the Lairig Ghru , i was up Glas Tulaichean (& friends) over the w/end & thoroughly enjoyed myself , another walk report of this range (from me )coming soon.

rockhopper wrote:Enjoyed your report - brings back memories - had my first ever wild camp at Loch nan Eun while walking in these hills in April last year - cheers

Yes - it is a beautiful spot by the Loch there.

mrssanta wrote:that's a right early start to get there from Yorkshire!

You are quite right! But the forecast and opportunity were too good to miss

ChrisW wrote:That looks a fair old drag CL, but you picked the right weather again and got some great shots along the way

Thanks Chris. No drag - all pleasure

steven65 wrote:Hi C L , i enjoyed your walk report & the foto towards the Lairig Ghru , i was up Glas Tulaichean (& friends) over the w/end & thoroughly enjoyed myself , another walk report of this range (from me )coming soon.

On the day you did this route I was a little further north - report to follow I hope.

Steve B wrote:Hi C L,
Looks like you had a day as good as mine. I thought this was a great walk, although the last couple of miles got to be a bit sore on the feet.
I know what you mean about wanting to stay and take in those views.
Cheers,
Steve

One of these days I might actually bump into a fellow WH'er. A couple of near misses here!

Hi Clach Liath, a great report. I was looking at walking in this area at the weekend and was wondering how suitable and how far I could take the mountain bike up from Spittle of glenshee. I had originally planned on catching a few munros from Inverey but heading from Spittle of Glenshee would mean less driving.