Ben Lomond by the easy route

Ben Lomond by the easy route


We'd had Ben Lomond in our sights as the first hill of 2012 since January this year but for a number of reasons - mainly weather - we felt it daft just getting to the top for the sake of it: we wanted to see something once we got there - so for that reason we kept putting it off. Anyhow Saturday 24th March was the day. The MWIS forecast was for 90% visibility and it looked like they were predicting an inversion!
We arrived at the car park nice and early at about 815 and by the time we had got kitted up it was 830 and off we went, leaving this behind: .
It was a cool start to the walk but based on what I had learned the previous week at Ben Chonzie, I started off with just a teeshirt. The only thing that slowed us down was this wall of stone and really didn't expect this on a tourist path but we clambered up over it once we'd figured out the best way -which it turned out wasn't. The best way is over at the right but we just clambered straight up the front! Before you know it you're on to the mountain although even that is only obvious because there's a fence and boulder telling you. The mist or cloud was unrelenting as we headed on up the first bit and eventually the sun struggled to make an appearance albeit not a great one! Not long after that we emerged gradually - so gradually it wasn't immediately obvious - from the mists onto the long shoulder of Ben Lomond and hey presto the clouds were below us. Our first inversion! That's the Cobbler about dead centre and in the misty distance. But now we could see the target and that always makes it easier and sometimes more motivating so off we went up hill again, stopping for a crazy pic once or twice on the way! and now it's all uphill again .Soon though we reached a bit that had been missed by the sunshine: 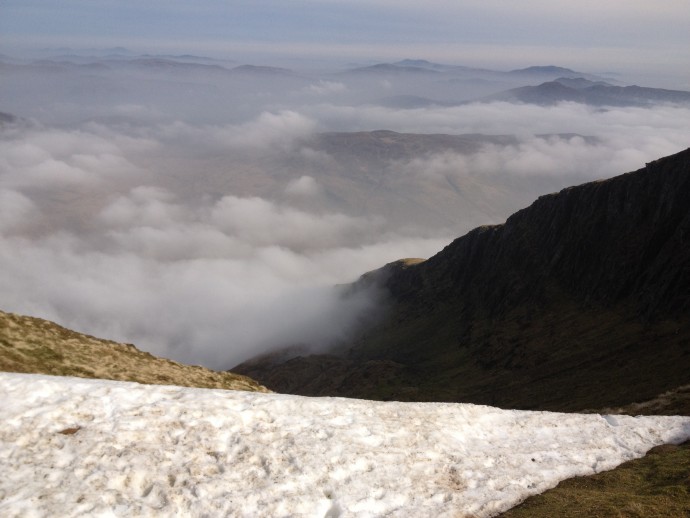 the North facing cliffs on the right and a small patch of snow right at the top of the corrie. After a short haul further on we reached the top and got the customary pics taken. By the time we had finished lunch the misty tops had cleared a bit - 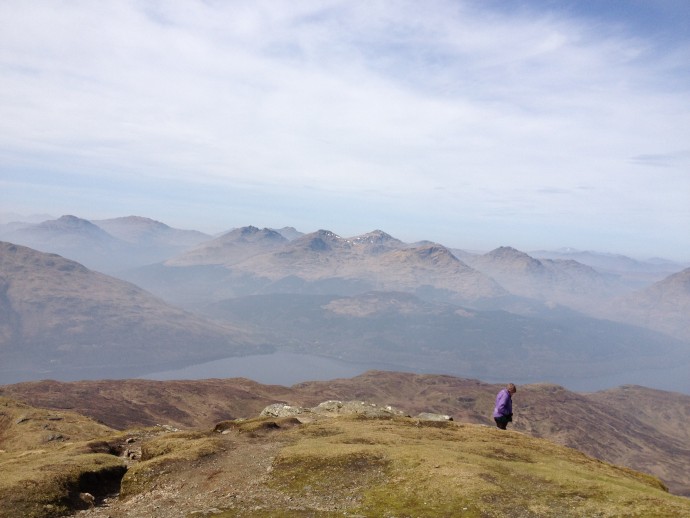 We came back down by the same way except that occasionally went off piste by following a well trodden path across the moorland which cut out a few corners and gave our feet a bit of a rest from the hard paths. We even stopped to watch the local sport of mountain biking down the hill. It was a great day out, we got burned quite badly (only we were surprised by that) although we had commented about how badly burned the people were we met on the way back down.
It was an amazing day for the most popular munro in Scotland.
PS We had intended to come back down by Ptarmigan but someone on the summit said it was easier coming up that way and that it was quite difficult going down. So we decided against the challenge this time.

Great photo's above the clouds, looked like ye were enjoying it up there.

Looks great and some awesome pictures

Thanks for the comments. It WAS a fantastic day and good to have nailed the beast. I do wonder though why there are so few reports on the way up or down ptarmigan?

Thanks - it really felt like we were on top of the world. More please!