Finally the North West Highlands gets some good weather

after - quoted from a local - the worst winter in 6 years!!

(since she's been in Skye)

I got as far as Elgin before passing out in a layby - a couple of hours of semi-sleep later I plough on for a bit, coming to a halt somewhere besides Loch Ness at 2am. Shamefully, the tent stays in its bag and I curl up on the front seats Loch Ness pre dawn, a calm start to the day The Cuillin doesnt rush to come into view even when you get onto Skye but eventually I got to the famous Sligachan and there it was - or almost was, as it was in mist. The start of the greatest spell of March weather to ever grace Scotland and big surprise the Cuillin were dragging their feet Despite 15 years of Munro climbing this was my first ever taste of the Cuillin close up and my excitement was lined with some trepidation - my Dad had been dragged up the NW ridge of Bruach na Frithe and described it as the most terrifying place he'd ever been - what better route to start with! I was determined to squeeze as much scrambling practice as possible out of this so-called easy ridge and I certainly got value - sticking religiously to the crest, there was loads of exposed scrambling moves above big drops, especially to the east, with the west flank dropping away pretty sharpish as well. All those guide books that describe this route as a stroll must be following the traverse path! A faint brocken spectre, looking down the North west ridge

The mist had been bubbling over from the south all morning and, whilst the ridge had enjoyed fleeting sunshine, disappointingly the summit was in the clouds

After hanging around for 20minutes though

In 5 minutes the mists had disappeared 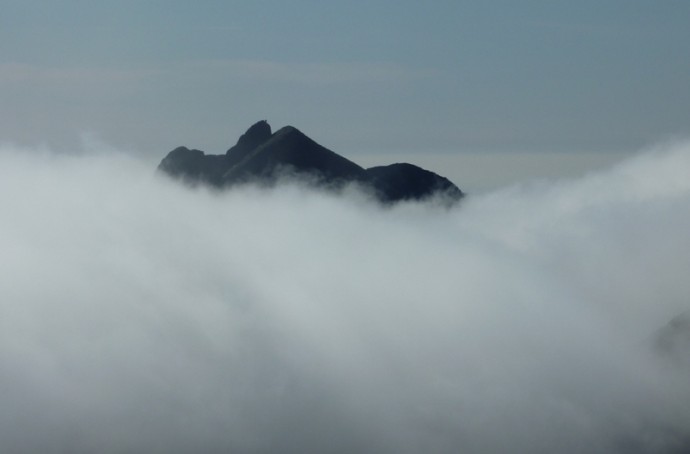 Looking south down the Cuillin ridge Looking down the NW ridge A climber on Pinnacle ridge on Sgurr nan Gillean

With the day suddenly electrified I went flying up Sgurr a Fionn Choire in a burst of adrenalin, some pretty challenging rock steps to scramble up and more good practice. The gabbro rock was making its presence felt on my hands, pure rough sand paper, but unbelievable grip for the boots Am Basteir from Sgurr a Fionn Choire

Am Basteir and its Tooth are breathtaking from this angle and look impenetrable, I was quite happy to drop down on the north side and follow the scree path below its north face and up to the far col - the short mileages in the Cuillin being a big bonus here Am Basteir and the Tooth

The route up Am Basteir was surprisingly easy considering how it looks from side on - I tried to stick to the crest which took me directly above the 'bad step' a 3m high almost vertical step in the ridge and the terminus of a narrow section of arete.

Now I'd checked this out online before, and seen some pretty detailed pictures of it, including one indicating EXACTLY where the hold - usually hidden from above - is. Indeed, I looked over the edge and could see it!

Although the exposure wasnt quite as bad as I'd expected, down climbing was briefly considered and seemed tricky. Instead, I opted to use the 40m scrambling rope in my bag and do a classic abseil

I'd practised this technqiue before, but this was the time I'd used it on a Munro! 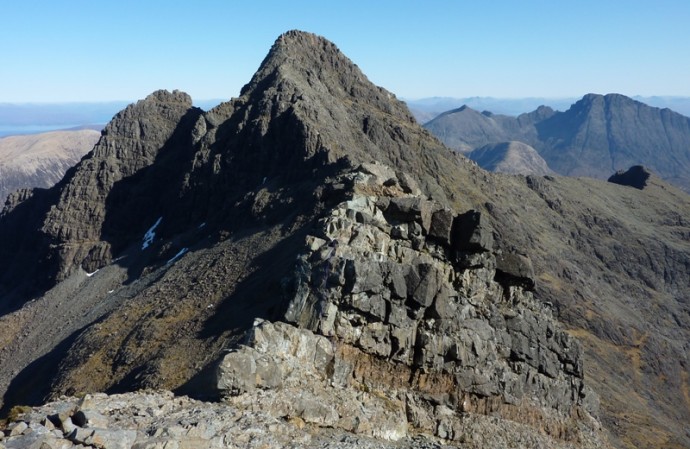 The bad step with Gillean behind

I found an anchor - just - threaded the rope round it, gave it a few good tugs

and went for it, tossing the excess into the gap. Gradually I edged down and in no time - it was only 3 metres - I was down 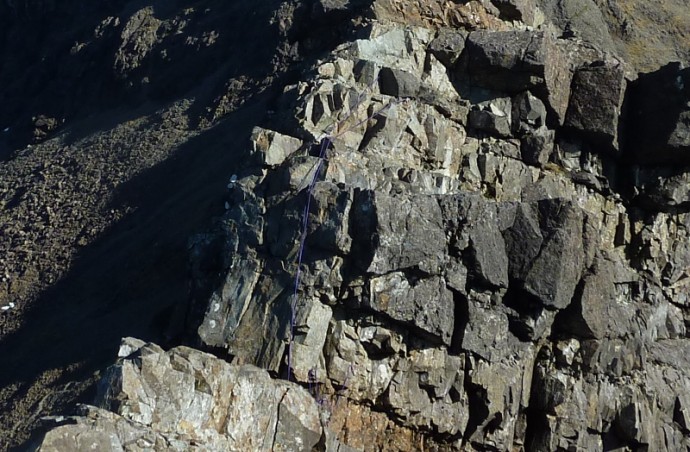 Zoomed in pic to show rope in situ

The remaining scramble seemed a walk in the park, although I gather the basalt slabs I scampered up can be deadly in wet weather. Looking down the ridge past Sgurr a Fionn Choire

Back at the bealach, I initially headed east along the ridge just to get the view of Am Basteir that makes it look like a sharks fin I had flirted with the notion of attempting the West ridge of Gillean, but it had been long since dismissed. Now actually at the foot of it, I thought I'd at least go a brief reccie, a spot of tourism maybe

The next thing I knew I was on a comfortable enough traverse path on the sunny south side, apparently skirting the scrambly crest above - how long would this go on for?! Sure enough I reached the mauvais pas, the ridge leaping in one 4-5 metre vertical step that seemed unclimbable. My path took me through a little gap onto the north side of the ridge where I came upon a worn path which in just a few feet lead me to the bottom of a wide open chimney.

From reading descriptions of the route I recognised this as the spot where one usually abseils down in descent to avoid the old Policeman pinnacle stretch. It was classed as a moderate rock climb, but seemed distinctly climbable, with plentiful holds, and not too long. I was confident I could do it and so thought - why not start it? I did - and 5 minutes later, with one nervy moment before the holds came to sight, I was on top. I darent look down, but could feel I was on top of a rock tower, and had to scramble to get off it as heading back down was not an option! A few moves later I was on easier ground and massively relieved. Above me I could spy two climbers on the summit, which made me feel less exposed and alone, and I had no problem heading up the remainder of the ridge, which was surprisingly no harder than the NW ridge of Bruach na Frithe (though I'd left my insistence on sticking to the true crest long ago!)

With an amazing feeling of relief I reached the summit of Sgurr nan Gillean! The photos can do the talking for what an amazing viewpoint it was... The two climbers had been up there for a while so headed off giving me some good photo opps and an idea of the route off! 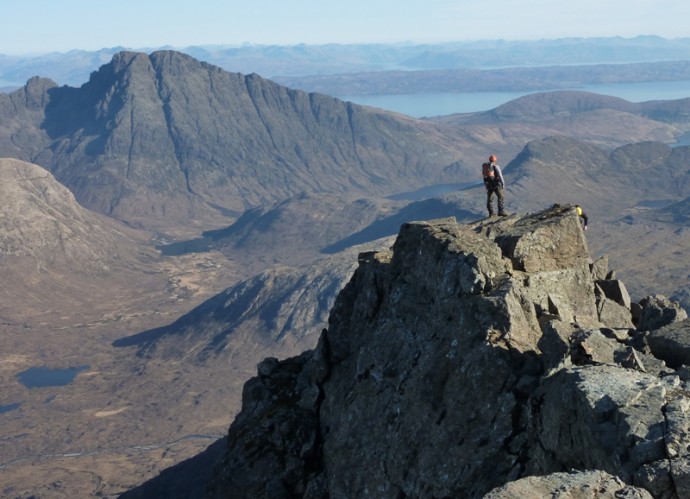 Eventually it was time to head down and tackle a route I'd read a lot of worrying descriptions of, the most "i turned back 50ft from the top" accounts for any route I've read

In the end it wasnt too bad, but definitely requiring care. The first move across the gap, then down the first step in the ridge, were not too bad... The first step down from the summit perch

After there was a very exposed move down a slab tilting over the precipitous east face, much care required! Further down the ridge, and after a few more moves down slabs that were a little exposed, I looked back up the western side of the ridge and it seemed more broken and less exposed - if one could have got down that side sooner it might have been less unnerving perhaps? The rest of the descent was rough and unfriendly with scree and boulders but the path got better and better and eventually I was back into the evening sunshine heading across the boggy moorland wonderfully tamed by the now excellent path. The setting sun was lighting up Sgurr nan Gillean's pinnacle ridge as I reached the Slig, a fine and fitting ending to the day. I was camping opposite the inn so would drop in their for a night cap, but before then I would head to Portree for some good food and refuel for the next day - an even more daunting prospect..... Fantastic , a very well described and photographed day , what a stunning place . I'm looking forward to the next installment !

Great report. Really does justice to that feeling you get when you personally experience somewhere that you'd previously only read about. Lovely photos to accompany it too.

Great report and like many I'm sure, reading it makes me yearn to be back there

Its easy to see from your photos why the ridge gets its iconic name of the British Alps!

A fabulous report with breathtaking pictures. However your narrative means that this one is firmly placed in the "squeaky bum" section and therefore not likely to be 2d attempted . Thanks a bunch!!!

A beauty of a day to be flying solo...although i guess seeing them 2 climbers brought a sense of calm

Been to Skye 4 times and yet to summit a Munro...just wets the appetite.

Good stuff Ranger, great descriptive report. I havn't done any hills on Skye yet, something i will have to remedy soon

Perfect weather, near enough, and good to see that the East Ridge is doable without a rope. I'd always thought it was, but have only abseiled down that way in the past, never come up it.
More please!

cant wait to get to sky for some walking,hopefully in the summer,

this has really whetted the appetite!

Skye's the place! A little bit of that is needed each year. Great report, you've got me thinking again ....

fantastic. we're off to Skye in May, can't wait, hope the weather is half as good as you have had. we are going with a guide however.

Very apt description of how intimidating these hills can be. Your report brought me back to 1997, when I did the same three from Harta Corrie on the south side in splendid weather. I stood hesitating about 25 minutes before going down the 3 metre gap on Am Bhasteir. My climbing of the west ridge of Gillean went in quite the same fashion "let's just see > o, I can do that > yikes, it's quite hairy, come to think of it". In 2003 I repeated it with a companion and a guide, and as always, company makes it all much easier.

Great report which brings back happy memories of Bruach. You were lucky to get such good weather, too. I never did get to do Sgurr nan Gillean and Skye is out of reach at the moment but I hope to get an opportunity to finish off a few more accessable summits one day.