Went for a quick blast up Fionn Bheinn today. This was my 2nd attempt to climb this hill, back in January my son and I gave up due to the snow depth.
Today I was taking my dog Sparky with me to climb his first munro Here he is Sparky

I left Achnasheen and head east along the A832 for about 1Km then crossed over into the fields and started up the hill towards the small forest. Through a gate in the deer fence, up through the forest and another gate and we were on the hill. From here there is an easy to follow path/track that goes up the hill heading towards a stone dyke. Looking down to Achnasheen

Where the track goes through a gap in the wall, we turned and headed uphill on a small path next to the wall. Followed this up towhere the hill levels out and the wall ends above Toll Beag. Stopped to take some pics here but by now the clouds were stating to blow over a bit more thickly so views were limited.
From here it was an easy walk up the rest of the hill to the ridge and on to the summit. As we walked up here the clouds were being blown in thick and fast, visibility varied greatly from one minute to the next and the wind was now quite strong. Looking out over Loch Fannich

By the time we reached the summit, perhaps only 15 minutes the clouds were in, the wind was up and the temperature down. Took a quick pic of my bag at the trig point and headed back down 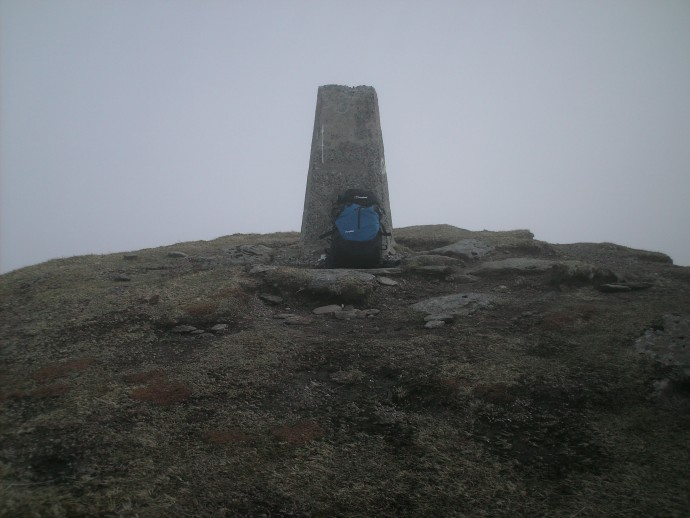 Followed the same route down as we had came up, stopped when we reached the wall and sheltered from the wind to have some lunch and water. Sparky on the way down

I think this is a different route from the one normally recommended for this hill. It is a bit longer but the ground was good with only a couple of short boggy sections which were easily avoided. The path is easily followable until the end of the wall, and from there it is obvious where you want to head. I think it's slightly longer but perhaps the gradient is easier because of that.
It took me just 3 hours 45 minutes up and back, if the weather had been better I would have hung around longer, but there was very little to see apart from cloud at the top.