Ben Cruachan is a very popular hill. I decided to include it in my latest walk (march 14-23, report coming up). The circuit from the south, around the reservoir clockwise, is the most popular route. Yet, if you study the whole mountain, you'll soon see there's more to Cruachan. For instance, the 1990's SMC-guide for the Central Highlands claims: "However, pride of place goes to the north ridge, whose aerial highway amply repays the effort of the long approach". In an 1893 SMC journal entry, particularly well illustrated, William Douglas writes "A route that ought to be more popular than it is, is by the north face (of Taynuilt Peak)." (see http://gdl.cdlr.strath.ac.uk/smcj/journals.html for more early SMC-journals).
My private reason: the strategy of stringing Scottish hills together along a trek, demands a passing of this hill along its north side, because on the south side I would have to walk along a road.

Does a climb by the north ridge involve a lengthy detour? The standard route form the south is 14km and 1376m. If you'd do the north ridge from Castles Farm, it would be 18km and 1690m. More work mainly due to the crossing of Lairig Noe, but worth it in my opinion.

On March 16 I bought food and fuel in Dalmally, chatted on the phone to the children and walked up from Castles Farm to and over the Lairig Noe. Pitched my tent next to the service track at 099323. A nice view towards Loch Etive and Beinn Mheadhonach, with the first bits of clear sky in days. Had a good sleep in a windy night and got up early enough to be away by eight. Sunset over Ben Mheadhonach and Loch Etive from Lairig Noe Overview of the route, seen from the north side of Glen Noe

1. From Lairig Noe, descend and follow the service track SW till it ends.
Below the Lairig at the 450m contour is a service track of old, connecting a series of intakes which gather water from the slopes and deliver it to the subterranean tunnel system that transports the water to the reservoir on the south side of the hill. This system looks quite well executed, and has a nice romantic 1950s notion of 'engineering will fix it all'. Great stuff, one can peek into the tunnels. (If you have seen the TV-series 'Lost' you know what I'm on about). The track ends where the north ridge of Drochaid Ghlas steepens the slope. A tunnel to the other side of the mountain End of the track. The north ridge is the snow-dusted diagonal upper middle of photo

2. Cross below the end of Drochaid Ghlas north ridge
Drochaid Ghlas is a dominant feature of the Cruachan massif. It juts out of the main ridge, higher than Stob Diamh, it is very steep and slabby on both its western en eastern face. The corrie between it and Stob Diamh is very rough, and its north ridge is steep and rocky, ending in a slabby triangular face one has to cross under to reach the start of Cruachan's north ridge. Do not try to keep height, it is a waste of energy at this point. 3. Cross the exit of Coire Caorach
A nice scattering of dark boulders, with some crooked trees, has to be climbed westward to cross Coire Caorach. The lower, northern end of that corrie is flat, boggy and contains meandering streams and pools. My tent (bottom middle, in sunny patch) and the track under Beinn a Cochuill

4. See the start of the north ridge and climb it all the way
At 075316 the north ridge proper starts. It is the low end of a diagonal climb to 073309. The route turns from a westerly direction to straight south. The ridge is wide and consists of rocks and boulders and grass. At 073309 you come to a small cairn. It marks, for descenders, the start of a northeastern spur that should not be taken, because it ends in cliffs. After this point, the north ridge narrows to an arrete at times. Do not be led astray by seemingly convenient grassy shelves, but keep to the crest. It is narrow, but wide enough to always evade the steep snowfields on either side. On the lower parts of the north ridge, nice n bouldery, looking into upper Coire Chaorach Higher up, steepening, looking in the direction of Lairig Noe.

5. Connect to the main ridge and climb to the summit
At 071305 the north ridge connects to the main ridge in a bulging kind of joint. Another great advantage of this route becomes clear: once all the hoopla is done, the summit is within reach, less than 200 metres away.

One difficulty, in winter, is a 'bad step' on the main ridge. On the way up, I climbed it directly through a mini-chimney, but on the way back from the summit I tried to bypass its slippery rocks (then slush and snow-covered) along the top edge of a very steep snow field. I didn't like the bypass one bit.
On the other hand: the fact that this bad step is the most difficult part of this route is a good thing. It means the north ridge itself is not difficult. At the cairn marking the northeast spur 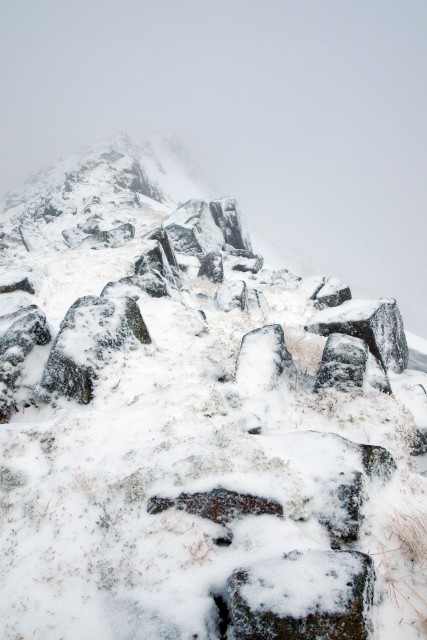 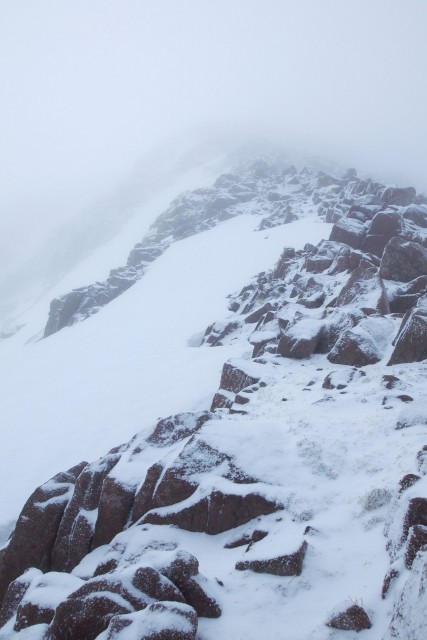 The highest part, running between snowfields Toward the summit from the top of the north ridge.

6. Descent from Sron an Isean or elsewhere
Following the main ridge, I cut a corner at Drochaid Ghlas, but you could take in that summit (1009m). When you reach Stob Diamh (997m), take a left (northeast) toward Sron an Isean (964m). 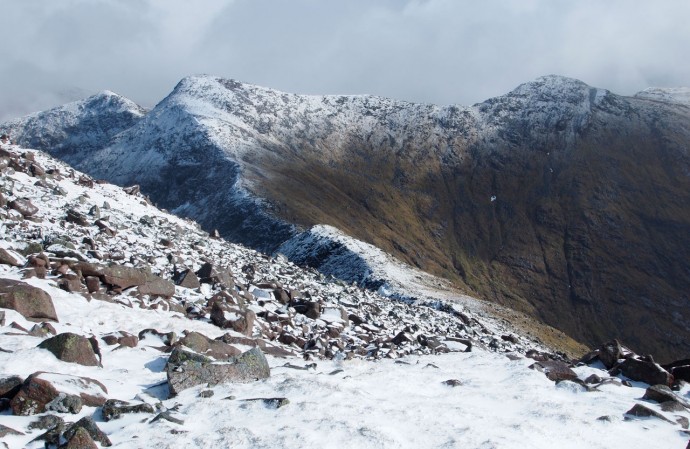 This top has a clam shaped northeast face, which is steep in the middle. I chose its western edge. A crescent-shaped descent takes you back to the Lairig Noe. It is broken terrain, messy and steep. Aim at the Lairig itself, for further west and down, a cleft made by a stream blocks the way to level ground.
Alternatively, when your starting point is Castles Farm, you'd prefer to follow Sron an Isean's east ridge all the way down to the quarry and onto the track down to the Stronmilchan road. Finishing the route over Stob Garbh or even Beinn a Bhuiridh could be an option. Looking down Sron an Isean's NW. Ben Cruachan from Inverliver on the eastern shore of Loch Etive

To finish my day, I lunched, picked up the tent and walked out to Loch Etive, up its eastern shore, passing Inverliver and Ardmaddy before setting up camp on the beach at Rubha Aird Rainich. Great views of Cruachan all the way. Next day, from the flanks of Beinn nan Aighenan, the mountain was more of an eye-catcher than nearby Ben Starav. 
2012_dag4.gpx Open full screen  NB: Walkhighlands is not responsible for the accuracy of gpx files in users posts

Exact opposite to my day in the searing heat up the tourist route! excellent work!

Super detailed report...could i hire you to write mines

Nice to see a different approach to the usual.

I've been investigating routes on this side of the hill to combine with some remote Grahams up that way. Hopefully for some kind of overnight trip. Hadn't considered this ridge specifically, so great to see

I've been investigating routes on this side of the hill to combine with some remote Grahams up that way. Hopefully for some kind of overnight trip. Hadn't considered this ridge specifically, so great to see

See Beinn nan Lus in the last photo? Nice hill from the north and west (from Loch Etive)
The other ridge is the north ridge of Drochaid Ghlas, slightly more difficult, but very interesting...

Oi there, you've nicked my route!

I had the north ridge ascent planned on a circuit from Castles Farm, but wanted snow and it was all gone when I was there a week ago! I read about an ascent of the north ridge that was done many years ago, think it was in JHB Bell's book A Progress In Mountaineering, and I do like routes that are a bit different. So for my trip I went up the east ridge to Sron an Isean, out to Cruachan then retraced and back down the east ridge from Stob Garbh, a cracking route and superb day.

Your report is great, looking forward to seeing some more from your trip. I'll return sometime to do it in the snow, or maybe the north ridge to Drochaid Ghlas, or maybe.....

Great report, I'd planned this route from Glen Strae this weekend. Hoping for some better views to make up for the lack of snow!

Some scary snowy bits there I wouldn't dare cross, but they make for great photos and I bet it was an exhilarating walk! And that sunset... prachtig