Started well on this one, but visibility poor higher up so got lost a couple of times.

Parking at foot of train station is limited & muddy, up to station then gate under the track. There are steps at the other side of train line leading to the path, path is steep but OK though overgrown branches in the way at times. 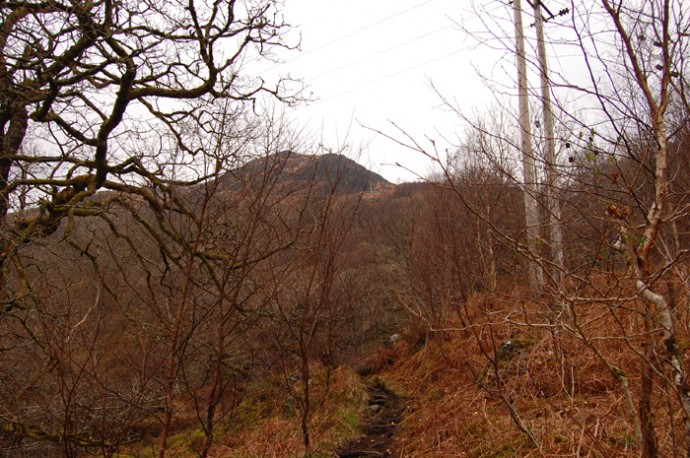 Continues higher up the side of a burn: Path a bit muddier now but soon off it and onto road over bridge to dam. There was a woman ahead of me running up the hill with 3 dogs, got tired just watching her. 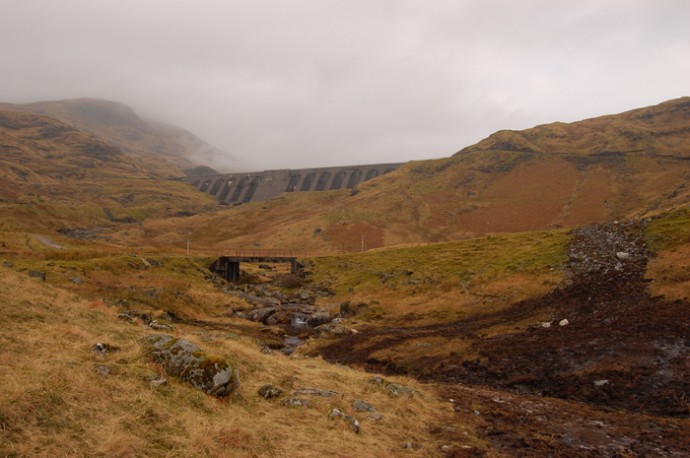 On the dam, looks like no visibility on ridge - forecast said there was a chance this would lift. It didn't. Followed the level track around the reservoir to start of path, although there is a route up Meall Cuanail ridge. Start of path at the end of track: Path is fine, couple of boggy bits though, thought this was the bealach but it was just a false bealach. Further up there was snow leading up to the real bealach. Was getting a bit slushy and wouldn't always support your weight. At the bealach, iron fence posts here and red path points the way: Cruachan cairn - woman with dogs turned around here but I decided to go on - clag would probably lift, wouldn't it? 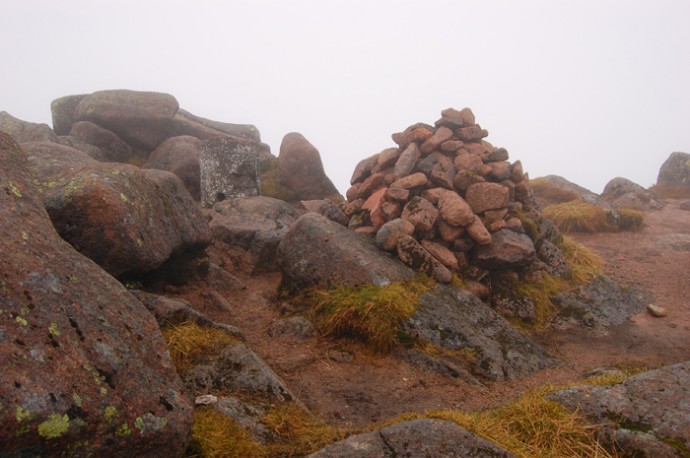 There was a memorial placque here, not fixed to anything so was upside down when I got there. 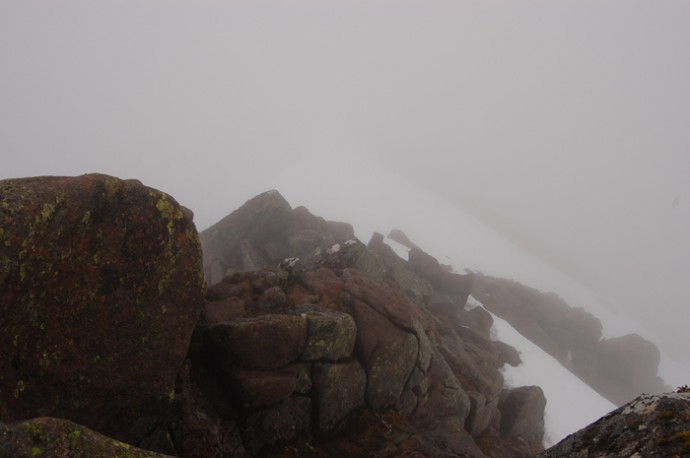 Slabs across path, these weren't a problem as I couldn't see down at either side. 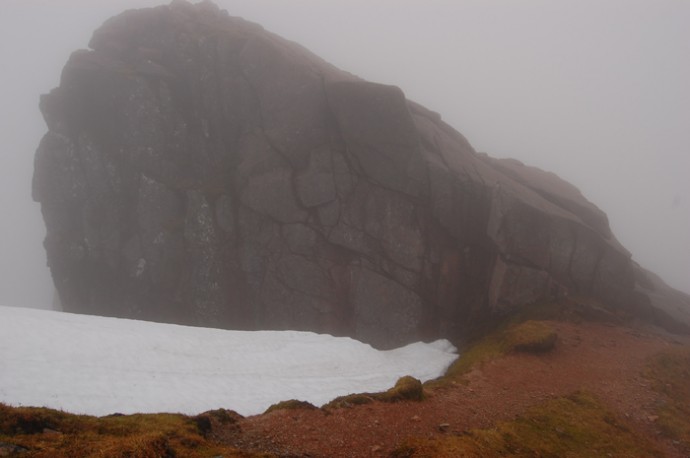 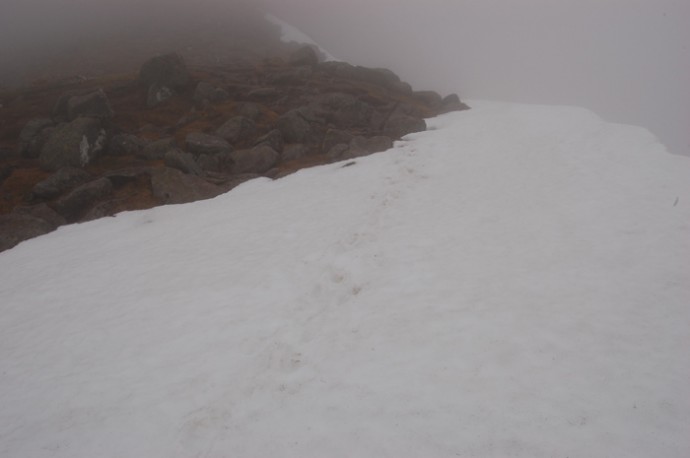 Was getting into a bit of a rhythm now, no views so head down & marched onwards. Got to a summit then path suddenly vanished on descent. 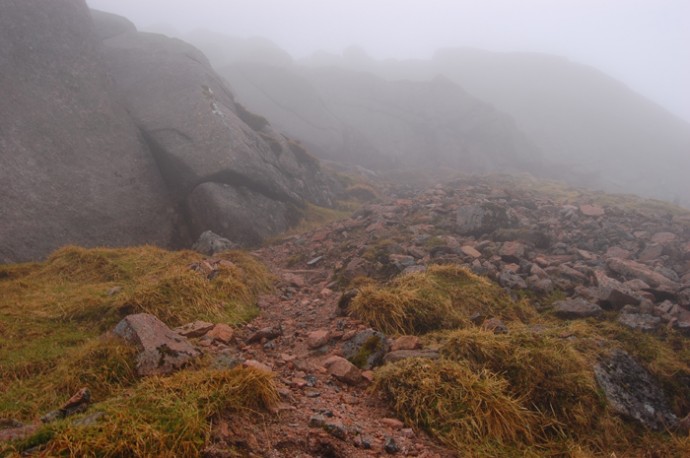 Went back up a bit then down again to try to find path. Finally looked at compass & realised I was off the ridge - had got to the top of Drochaid Ghlas and continued off the other side. Wasted quite a bit of time here and dropped compass which had now developed a growing bubble.

Back to summit and descended other side, large cairn marking ridge was there but somehow I'd missed it. Paid a bit more attention to compass now, couldn't see ridge ahead so it was clearly easy to take a wrong turn. Finally got to Stob Daimh cairn: 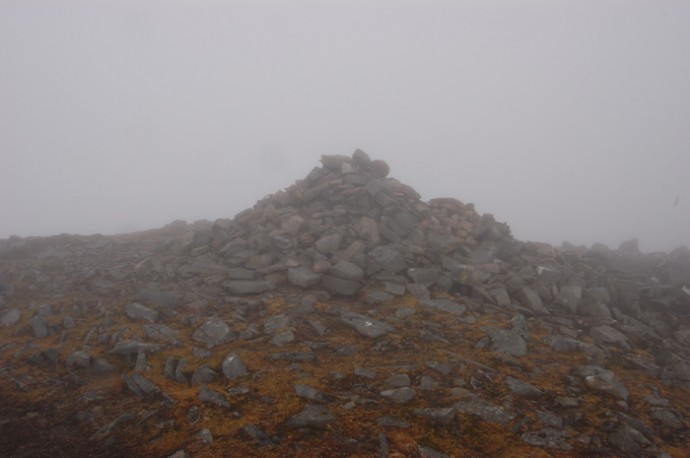 Stopped here for food and a wander around cairn. When I stood up to go I realised there were at least 3 paths off the summit, 2 seemed roughly in the right direction so I followed one for a while till I realised it was turning the wrong way. Back again & got the right path this time.

Reached another summit, which would be Stob Garbh, after which the map showed a descent to bealach then head down to reservoir on the right of a stream. I went down the other side of stream which was a bit steeper. Eventually made it out of clag, fell over in muddy grass just before joining path. It was the black, peaty mud - lovely!

Path led to the other side of the dam, I could see someone walking back and forward on the dam - when I got there he asked if I'd seen anyone else on the hill. He'd turned back after Cruachan due to conditions but his pal did the ridge. He got a text from him while I was there saying he was on the way back so hopefully was OK.

I went back to car, seemed to take ages now & I'd wasted a bit of time wandering around in clag. Night was falling so the other guys would be walking back in dark - hope they had torches.

Compass returned to Silva & got a shiny new one a couple of days later, also decided to get a GPS.

Great stuff Gman, only one thing worse that getting off track and having to backtrack and that is having to do it several times on the same hill

but you stuck to your task and got it done in the clag....what happened to all that sunshine over there

That'll teach me to read the date on the report