Share your personal walking route experiences in Scotland, and comment on other peoples' reports.
Warning Please note that hillwalking when there is snow lying requires an ice-axe, crampons and the knowledge, experience and skill to use them correctly. Summer routes may not be viable or appropriate in winter. See winter information on our skills and safety pages for more information.
Post a reply
58 posts • Page 1 of 4 • 1, 2, 3, 4

60 people think this report is great. Register or Login free to be able to rate and comment on reports (as well as access 1:25000 mapping).


If, like me, you're a 'climber' who doesn't actually climb, and prefer to stroll above precipitous drops then cling to them - any ambitions to complete the Munros will be haunted by the prospect of tackling the in pin. Now after 16 years of avoiding the place it was time for the demons to be confronted 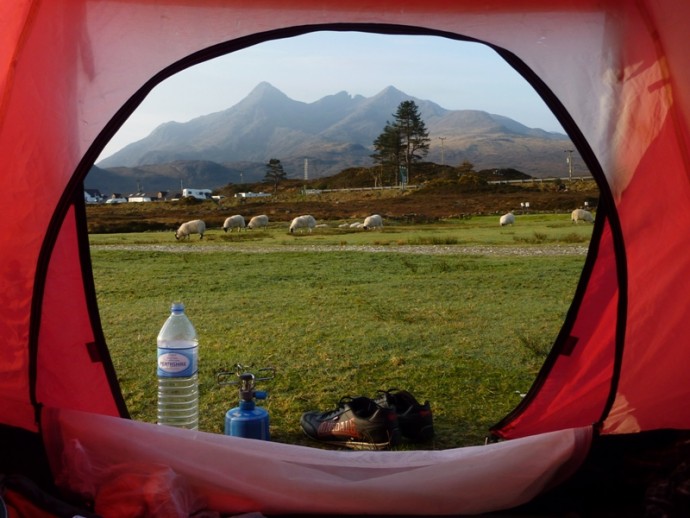 Breakfast with the Cuillins

The day started beautifully my peaks of yesterday framed through the tent window and the steam from an exquisite packet of super noodles melting the ice clinging to the tent - a nice remedy for a typically unsatisfactory nights sleep under canvas. Despite making me feel like im in my 80s, dried rolls chased down by a swig of water to aid chewing are set to become a regular breakfast for me on these early starts The pitch opposite Sligachan

The bridge over the River Drynoch was an ideal spot for a freezing morning wash before I headed down Glen Brittle to meet Jonah Jones, the guide I'd hired a couple of days earlier in a fit of sanity - looking back, those thoughts about soloing the in pin were pure evil 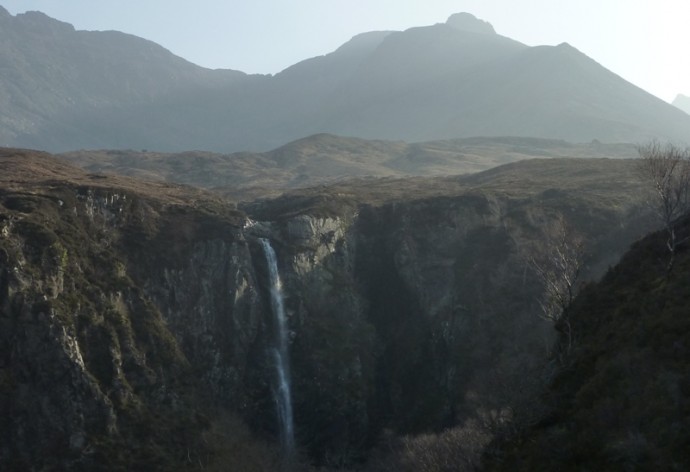 Helmets and harness were passed over - gulp! - and we got cracking in the sunshine, though the haze and southerly breeze were strengthening with every step. JJ was a falklands vet, and a skye mountain rescue guy, and entertained with some stories that didnt spare us the detail throughout the day - between puffing away on his pack of 20 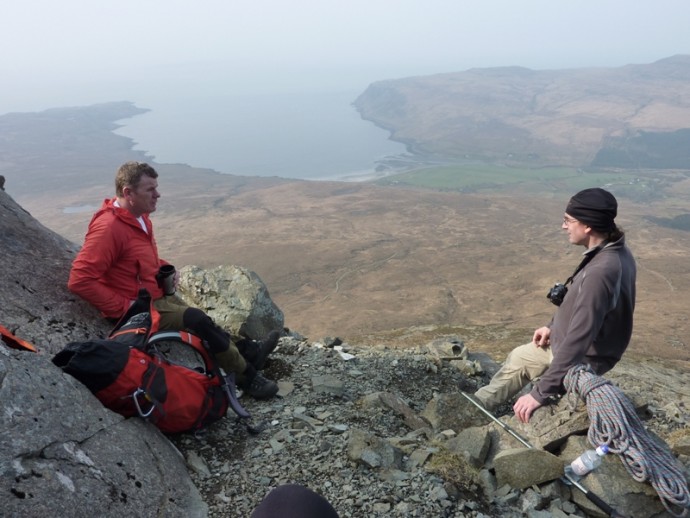 Lighthearted Falklands chat on the way up

After the previous days exploits on Gillean's west ridge I should have been in a cool and confident frame of mind approaching the climb, but - despite ample scrambling practice opportunity as the ascent ridge became rockier and narrow, I was 'ing it. 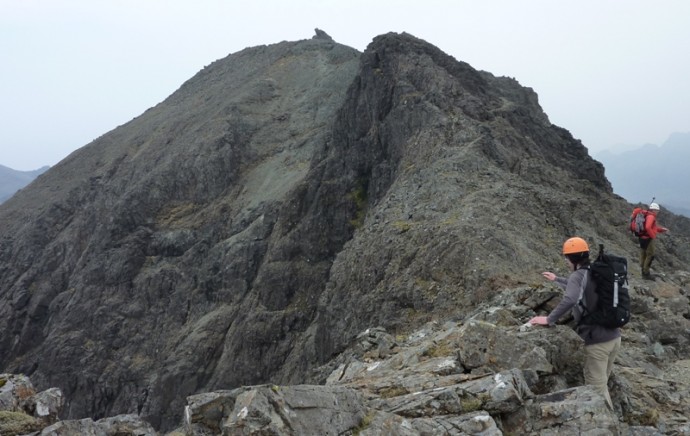 The Pinnacle peeks over the summit ridge

The haze had drawn in but the nearby peaks were still visible, plus it was dry, but the strengthening wind was battering us with concerning regularity and I was becoming increasingly convinced we were on a reccie mission - the bantering stopped and we wandered onto the summit unsure of our chances. 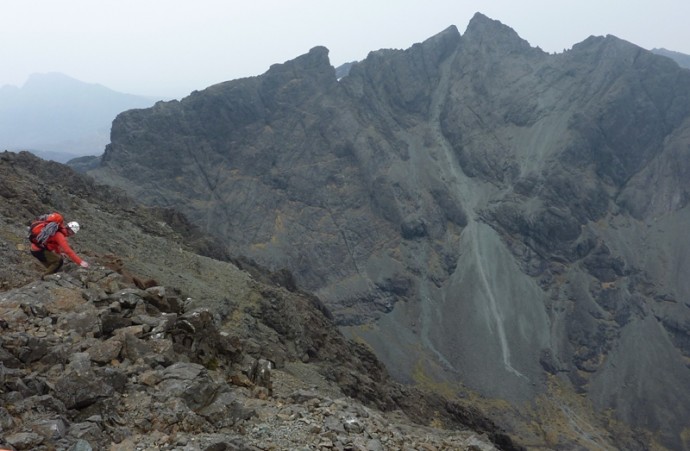 JJ's implausible reassurances that "the wind'll be at our backs so if anything it'll be helping" were eventually conceded and just when all seemed lost he came out with a kind of 'sod it, we'll go for it anyway' - which changed the mindset immediately! 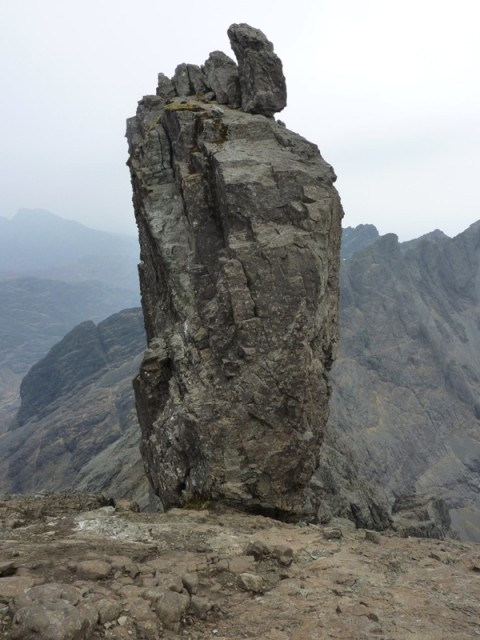 We lunched, I preferred to look westwards as I ate, and then geared up and headed down to the base to start the climb. That classic scene from Godfather when Pacino's about to do the deed and the train's rattling past always comes to mind in these situations, I wasnt thinking rationally and as I got the "start climbing" call I had to think hard about putting one foot in front of the other. 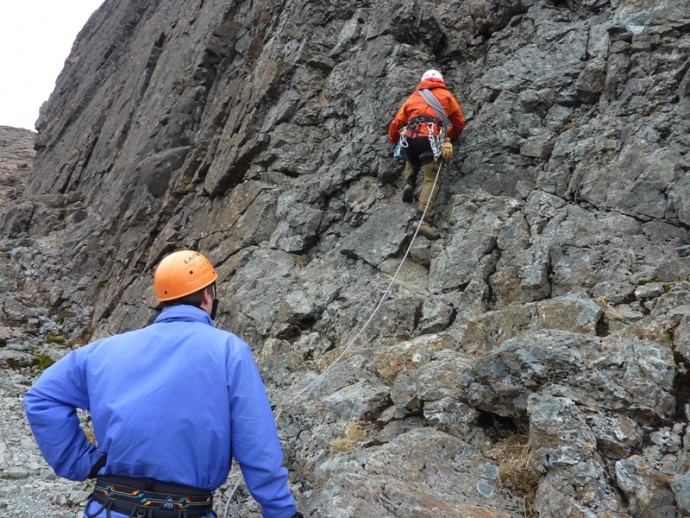 I was on the middle of the rope - tied on 5 metres above another bloke who was on the end, so basically I couldnt go more than 5m's away without grinding to a halt! At one point I had to pause on an exposed move for my friend to catch up - I stared at the rock in front of my nose until I could crack on.

His insturctions were - if the wind starts gusting - just cling on and think of england so to speak, I did this a couple of times and the wind howled against me, but to be honest it was lower down the list of concerns behind: 1. Holds 2. Exposure.

At another point JJ asked me to pull in the slack rope whilst he showed us the Crux move - very helpfully indeed - he asked me to look down to my partner and see where he was, I refused! 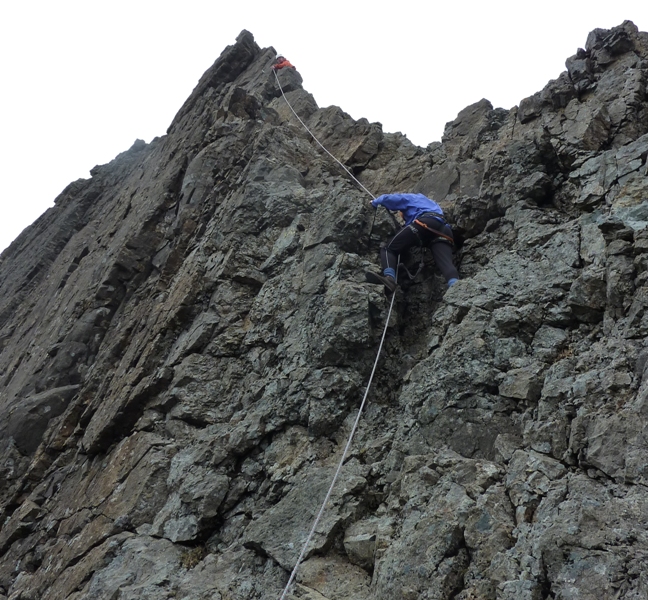 The paralysis overcome, I proceed

Come to think of it now I'm not sure what JJ was anchored to, but he showed us the move and we followed up to the first belay point. Soon after coming out of the chimney onto the crest - doubling the exposure in the process - the crux was basically a big step up onto a big jug hold with the left foot, but made trickier by only a tiny notch foothold for the right foot and a lack of big holds high up where you'd want them for the left hand. It went though - and 'thats the toughest bit over' was music to my ears! 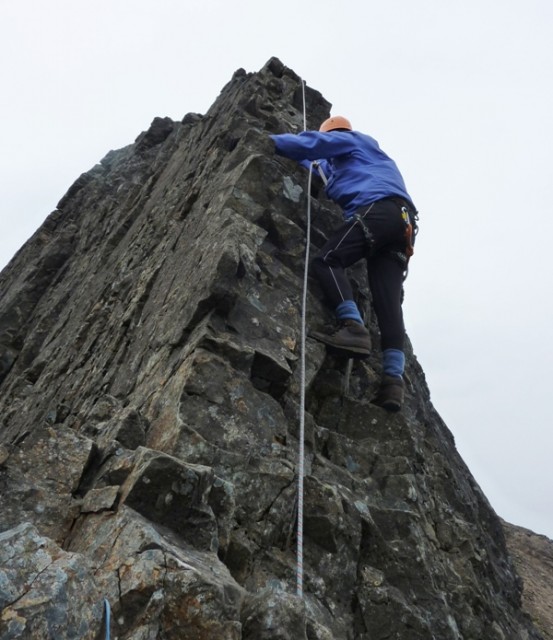 I almost enjoyed the belay point - clipped into a sling I felt safe and it was like peering over a garden wall as I gazed over the crest across Coire Lagan. A steep but if i recall straightforward few steps led away from the belay and the angle relented markedly - but - the crest also narrowed to only a foot or two wide in places, which required care rather than any foot/handhold spotting ability.

The relief on reaching the final summit platform was immense - one of the best feelings ever on the hills. 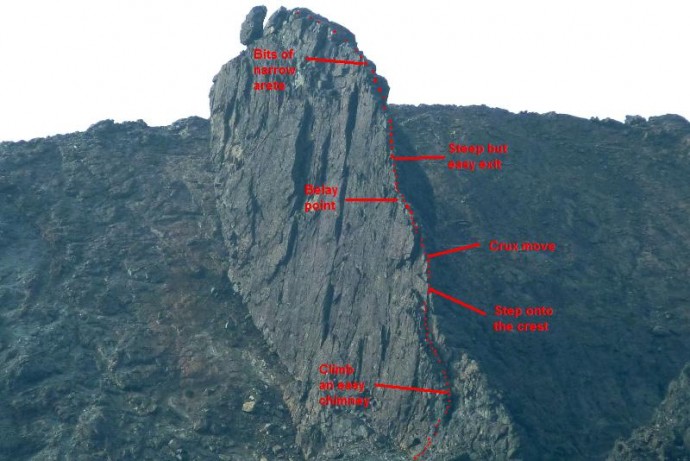 We had a small wait for another couple of blokes - one of whom I heard commenting "it's a bit different from cheddar gorge isnt it?"

- and then JJ lowered us down, to my surprise as I'd counted on doing it myself. Not fussed though, down I went, nervy at first but fine once I'd got going. 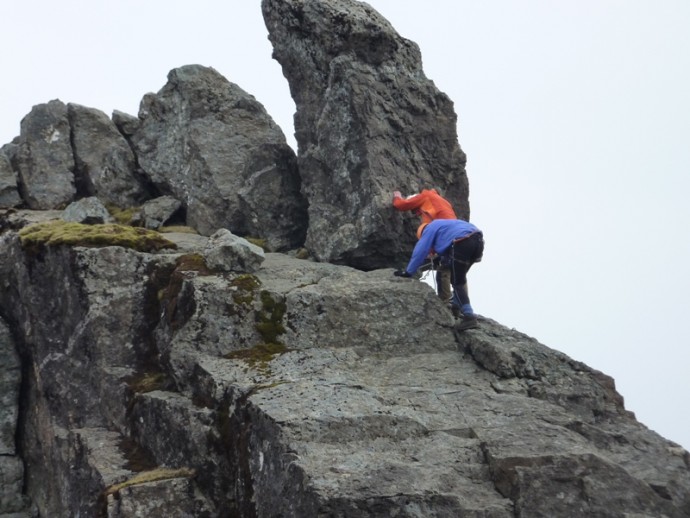 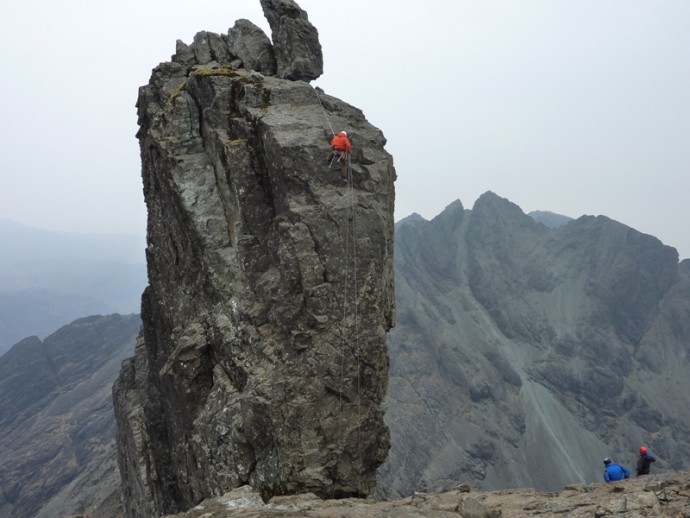 Guide about to commence his 2 second abseil

JJ came flying down in two seconds and that was us. My colleague had a celtic connections gig in broadford to go to but I'd been pretty clear throughout that I wanted Mhic Choinnich too, and as I was the paying customer and he was just the friend tagging along, we went for it. I knew linking it with Alasdair was problematic so this would be the most logical continuation. The chunk of pinnacle chipped away by the lightning

The slabs below the in pin and rounding An Stac were devilish, I preferred the 5 points of contact approach even if it incurred the disdain of JJ 's professional pride 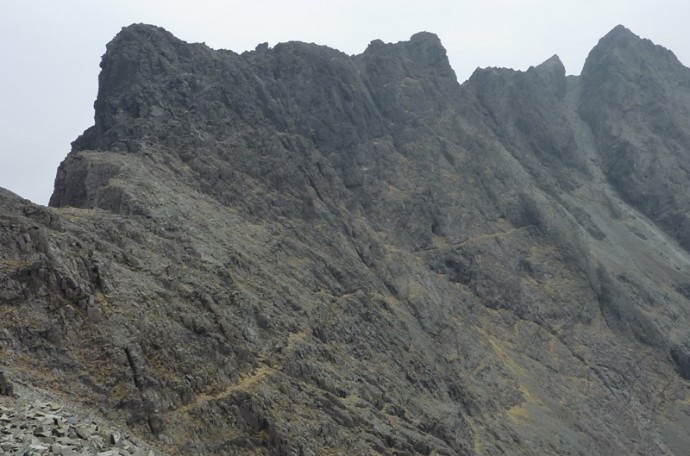 Having done the pinnacle you feel kind of invincible so there was no fear even though the route looked challenging. In fact we picked a route up through the buttress with ease, the exposure of the crest proving more testing. Not that he really needed to, JJ talked us through various moves that taunted gravity above the vertigo-inducing west face. The exposure topped anything from Basteir-Gillean the day before and the tiny summit was well earned for sure. On the narrow arete of Mhic Choinnich 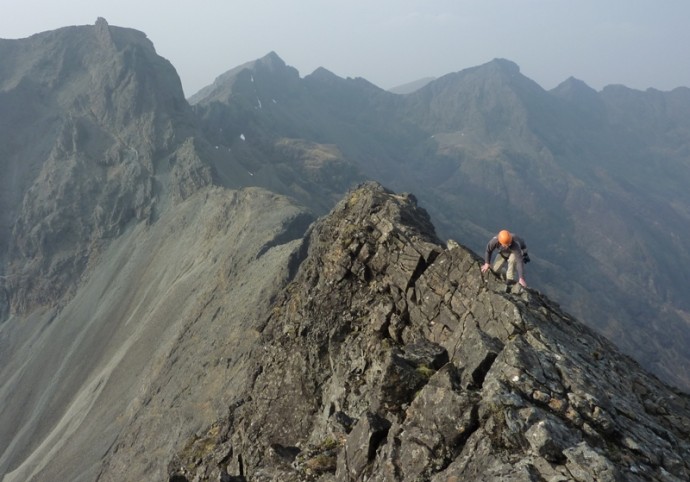 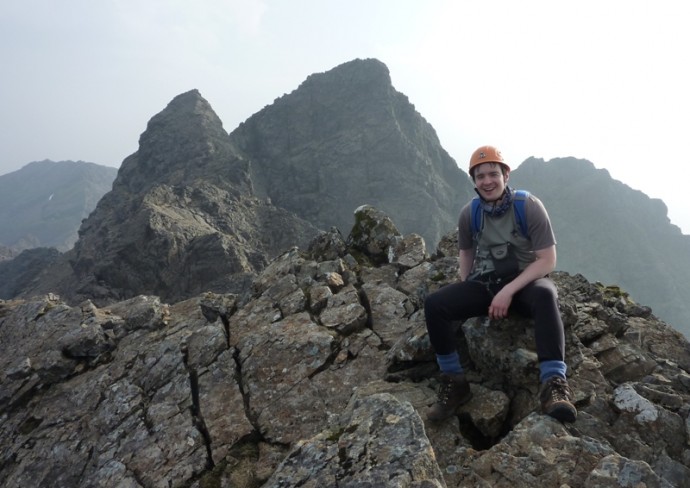 The day felt done, and later-afternoon sunshine fittingly appeared to warm us up. If anything the exposure was more in your face on the way down, still easy enough to a confident post-pin ascender. The An Stac screes were enjoyable for me - if not the boots - and the path down, well maintained like all the Cuillin approach paths I came across was a delight in the evening sunshine 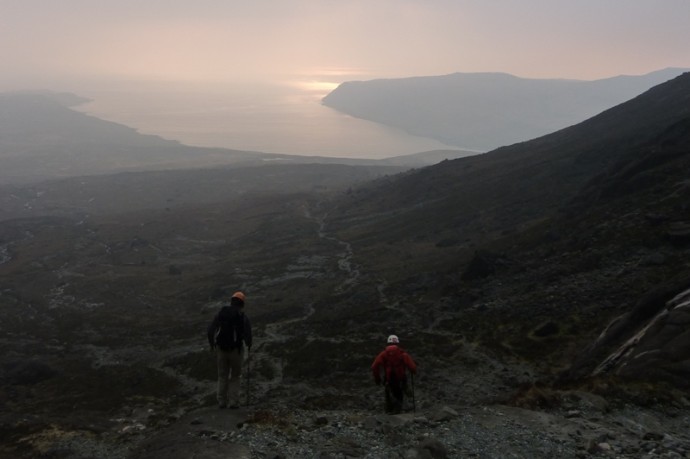 Descent out of Coire Lagan 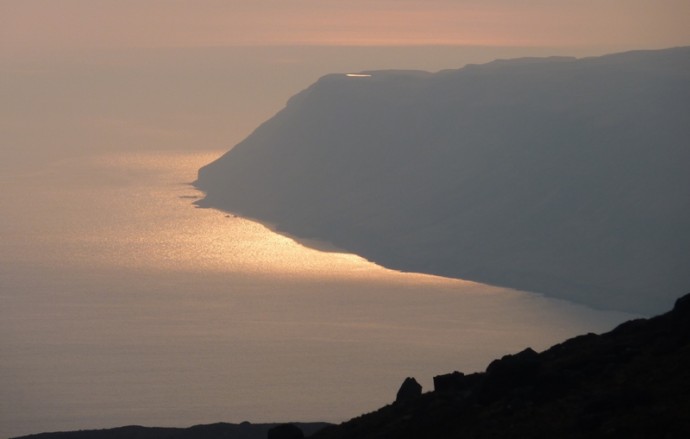 Light picks out a lochan 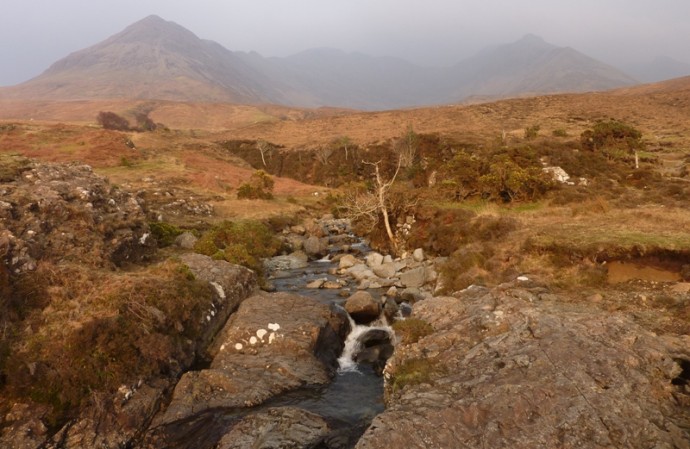 ) in Portree at the Caley Inn to round it off - Munro climbing at its very best. Not all over yet though.

The legs, the mind, and most importantly the Mrs' approval

, were all present and correct for one more day's sport at least....

Wow, yes, lovely !!!....takes me back to last year....what a fantastic day you had too, and well reported

Oooft!!!!! Feel the fear and do it anyway!! I felt the fear just looking at the pics

Brilliant detailed report Ranger, though I'm glad it will be many a year before I have to think about this one!!! Well done for overcoming the nerves/fear, not long until you finish them now

Brilliant report on the ultimate Munro Bag! It's that "chunk" at the top of the Pinnacle that always gives me the heebies when I look at it!

I was nervous just reading that

. Another fantastic report and pics.

Superb. getting scareder all the time, I'm going there next month very excited

Awesome, and wonderful report, like the first pic....Too scary for meeeeee!!

Well done a bhalaich, grand report its a challenge no doubt .......

no often a Ranger is top of anything these days

Ranger- just a fantastic report! Thanks for sharing this, especially the diagram of your route up inn pin.

Superbly written and photographed, oh and well done for the climb too!

Enjoyed this very much, cheers!

Another brilliant report Ranger. Still to do Inn Pinn although encouraged that you found Gillean et al more straightforward than Mhic Choinnich, Alasdair etc!
Have really enjoyed these reports and look forward to more submissions.
Iain

no often a Ranger is top of anything these days

Mate, the football wind ups everytime you reply to me are getting boring - you're clearly a funny guy with all the lol's you put at the end of your posts so finding something else to be funny about would be much appreciated

Stunning report and pics but my hands were sweating as I scrolled down the report so I don't think it will be anytime soon that I'll be over on Skye to do these climbs......

But then again, never say never, would be the ultimate feat for me to conquer the In Pinn considering I bottled it climbing through the eye of the needle on The Cobbler......

A great achievement, Ranger, and an entertaining report. An inspiration to those who see the In Pin as a major hurdle along the 283.

You clung on and thought of England?

If I ever get to climb Pillar Rock in the Lake District, I'll remember to cling on and think of Scotland

Top
60 people think this report is great. Register or Login free to be able to rate and comment on reports (as well as access 1:25000 mapping).