This board helps you to share your walking route experiences in England and Wales... or overseas.
Warning Please note that hillwalking when there is snow lying requires an ice-axe, crampons and the knowledge, experience and skill to use them correctly. Summer routes may not be viable or appropriate in winter. See winter information on our skills and safety pages for more information.
Post a reply
23 posts • Page 1 of 2 • 1, 2

our_route.gpx Open full screen  NB: Walkhighlands is not responsible for the accuracy of gpx files in users posts
Determined to make the most of the brilliant weather, myself, Simo & Darren (son) decided now would be the perfect day to finally complete the Wainwrights, well, me and Simo at least. The recent dry spell meant doing these three fells wouldn't get us as wet as it might at other times. We parked at the top of Hardknott Pass and headed up Hardknott Gill. 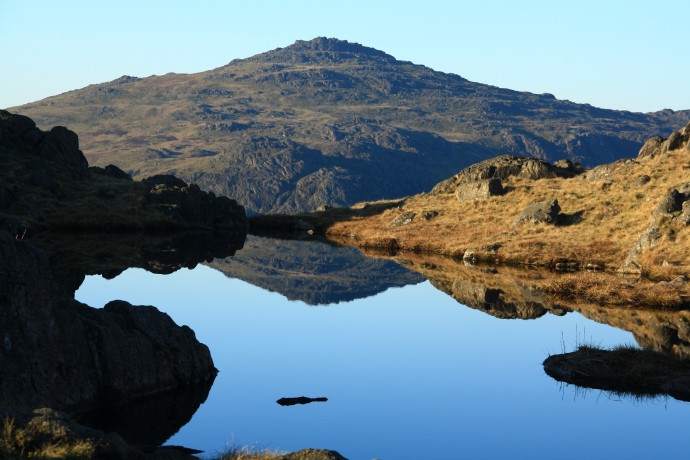 As we approached Border End, the Scafell range came in to view. 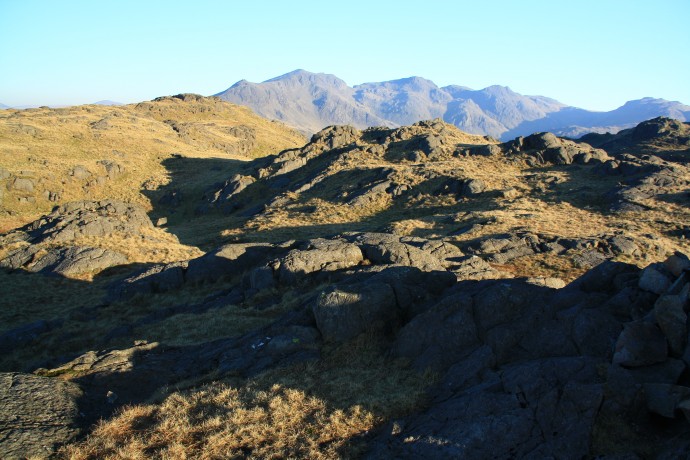 Instead of heading straight for the summit, we decided to take a look at the Eskdale Needle. 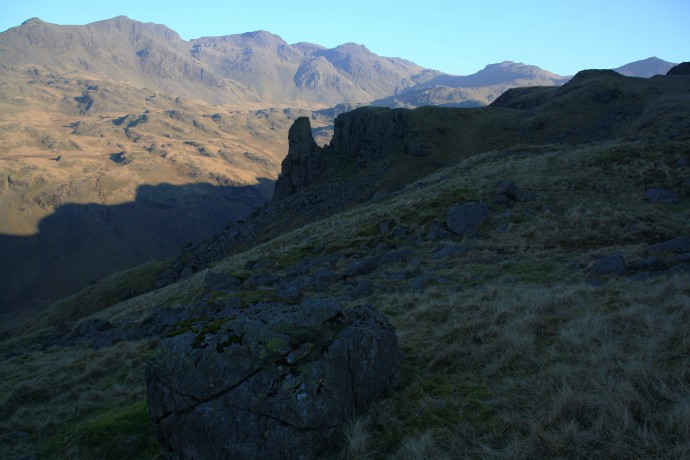 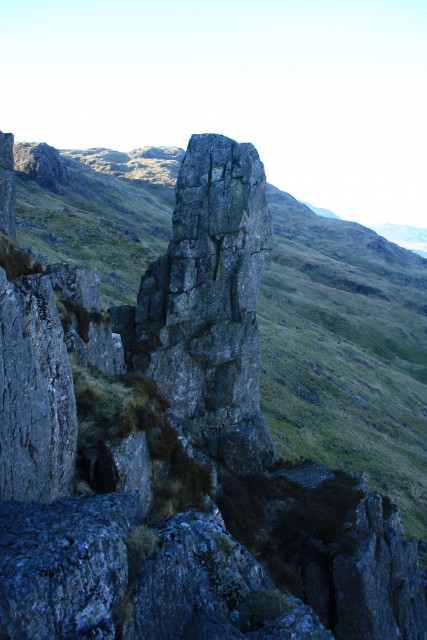 Yew Bank, at the far end on Hard Knott was our next stop, a well known point for painters and photographers alike. 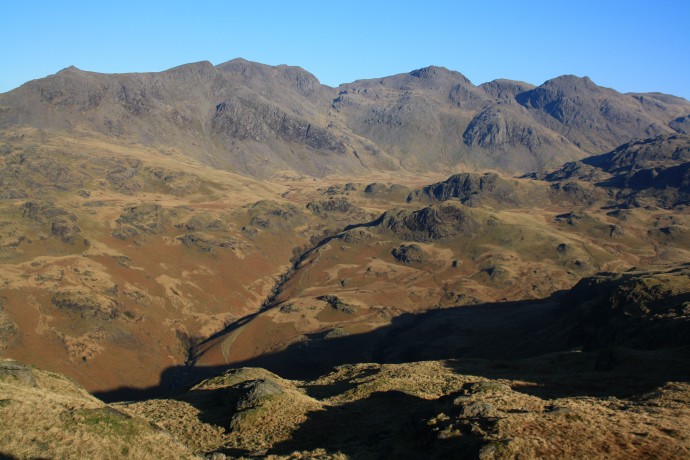 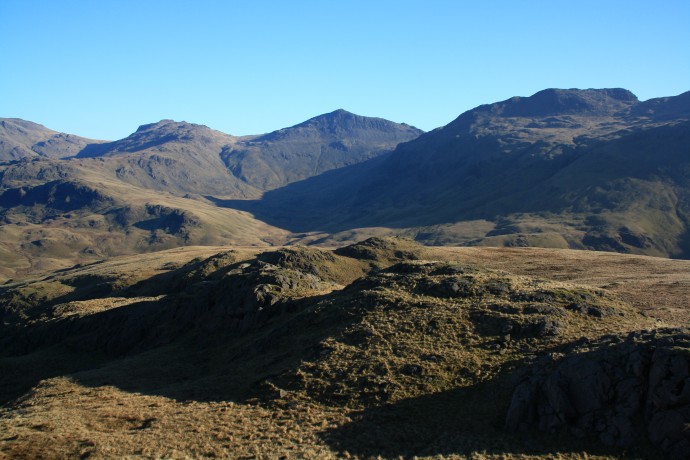 The views up Eskdale from here are stunning, though again today, a slight haze slightly spoiled it for photo purposes 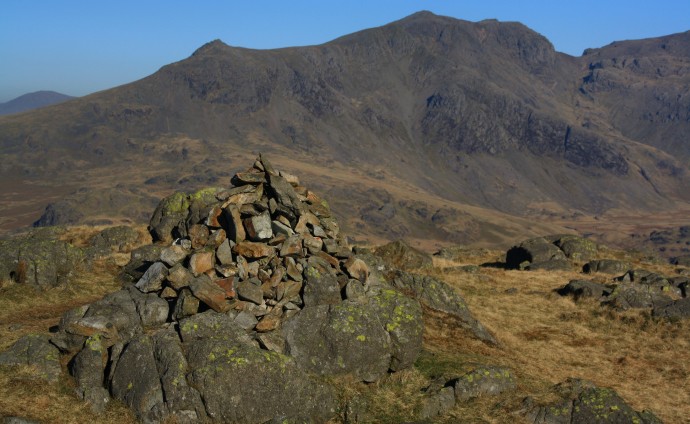 To make things a bit easier, we headed back to the road and down to take in Hard Knott Roman Fort, or Mediobogdum. Can't imagine what life was like here back in the day, but it is still impressive to see nonetheless. 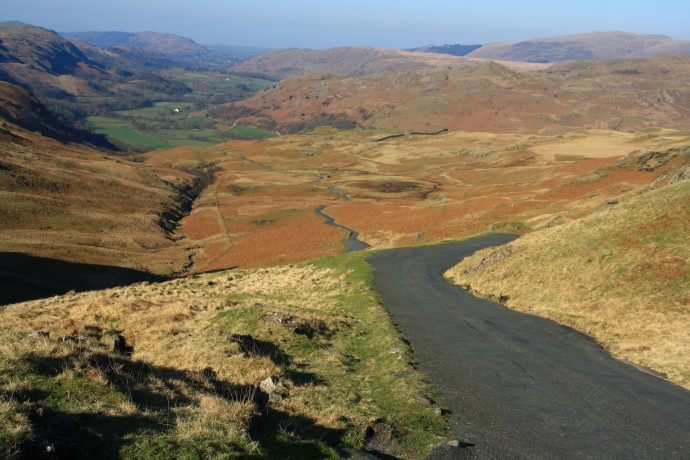 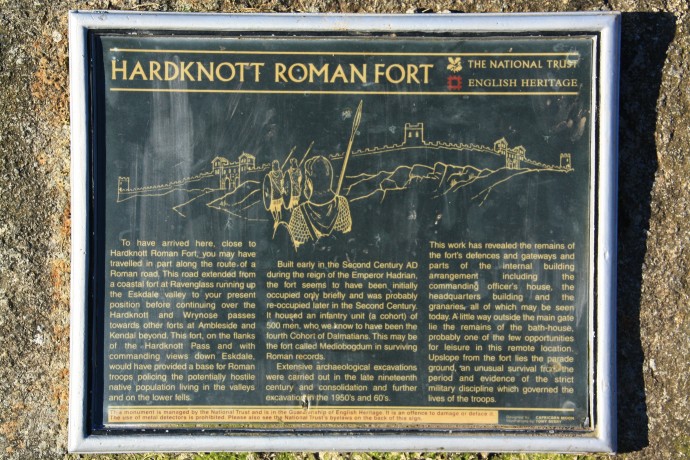 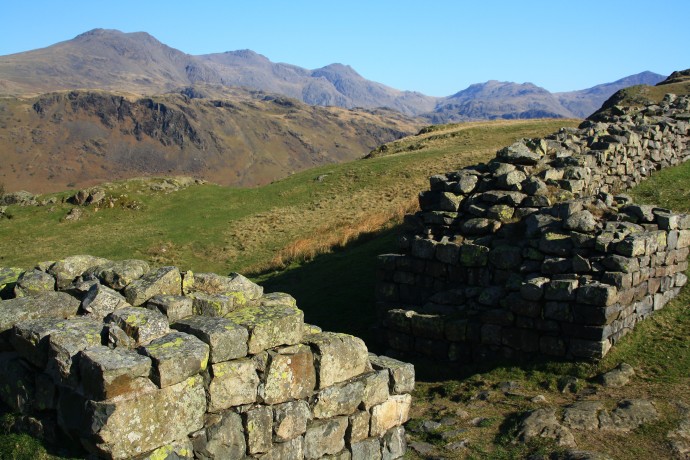 Nice view from the "back gate"

From here, we continued down Hardknott to Jubilee Bridge, before skirting the lower flanks of Harter Fell, to make our way across to Kepple Crag. The temperature was rising quicker than us at this point

and it felt really summery. 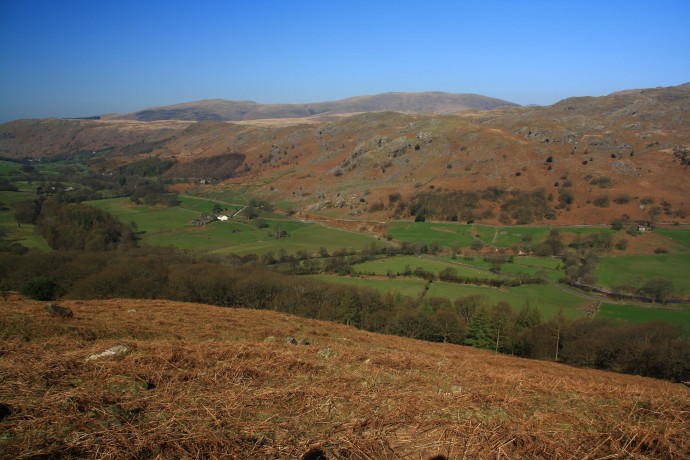 Up Eskdale to the Scafell Range.

From here, we made our way over Great Whinscale, Crook Crag and The Pike before ascending Green Crag. 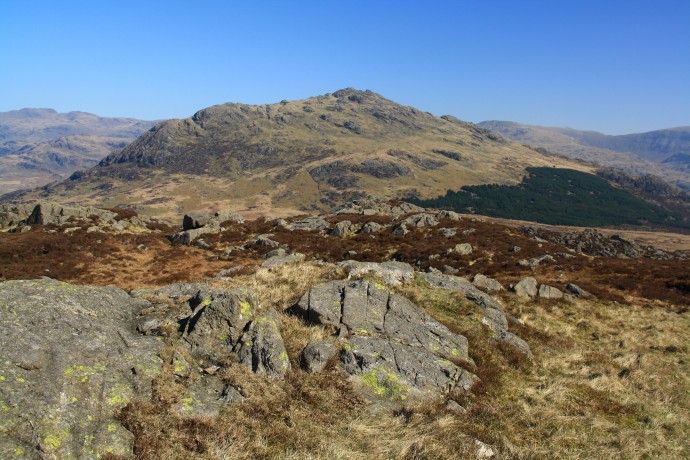 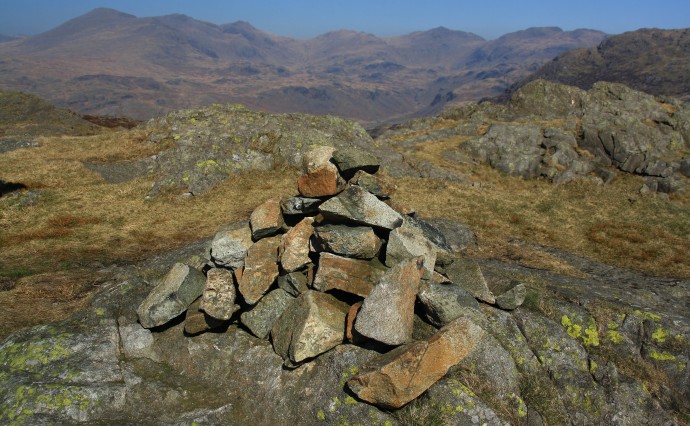 And so, with one left to climb we set off across a relatively dry Ulpha Fell for Harter Fell. I can only imagine how sodden this place gets after prolonged rain

but today, it wasn't too bad

We took the path directly up the side of Harter Fell, quickly coming to the stony summit, and just like that, the Wainwrights were complete 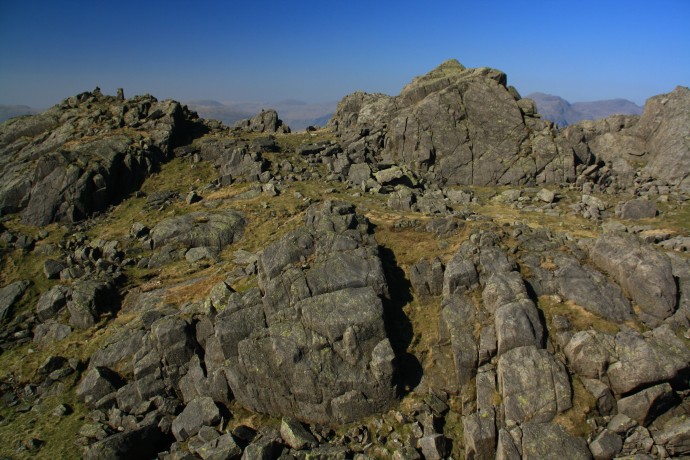 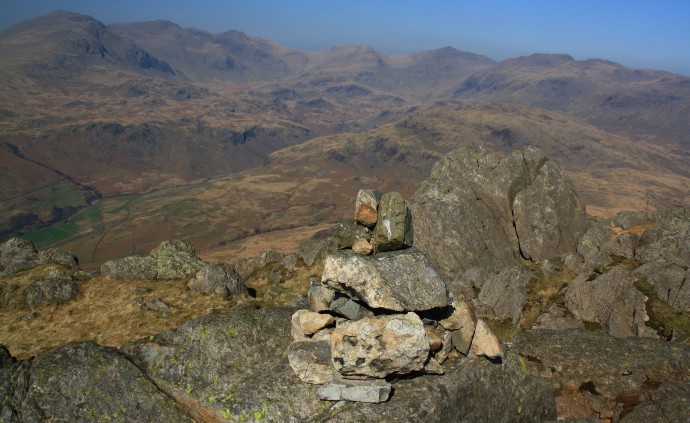 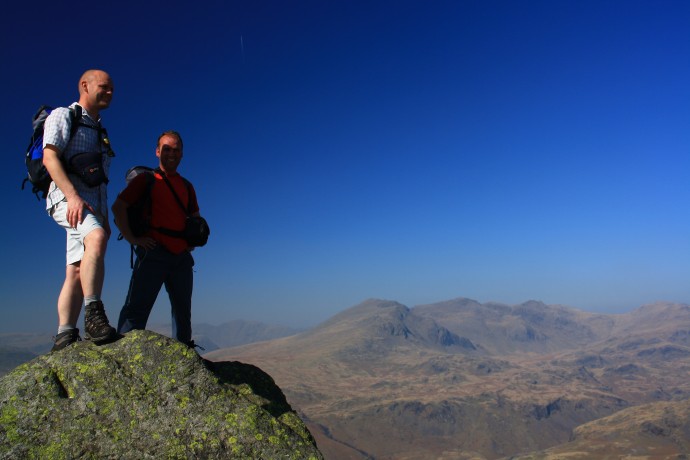 Me & Simo atop our last Wainwright.

All that remained now was to amble back to the car, feeling quite pleased with ourselves. It has only taken 4yrs 2mths to complete

. The clarity was beginning to improve, as was the view of the Scafell range. 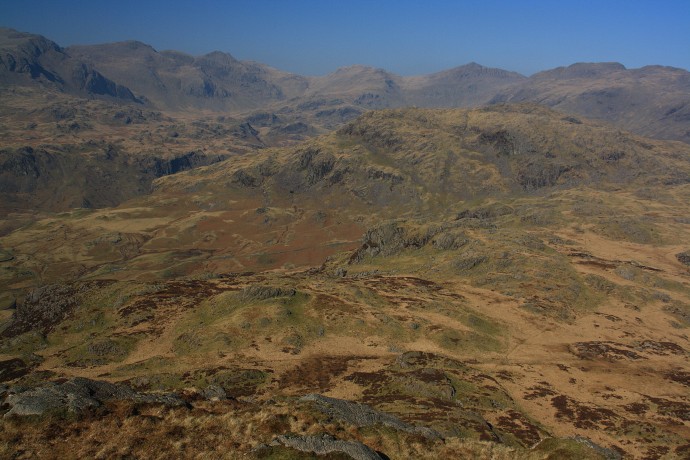 A good day all round and a bit of a tan to boot. Lastly, I would like to thank Simo, as without his excellent planning of routes, digestion of information about where we were heading and constant prompting to do things differently, I might never have accomplished Wainwrights list, so, cheers mate

Some great pics there

Looks to have been a great day out. Excellent pics. Great achievement, well done. Should have mine done by 2025!!!

What a fantastic day to finish on. Congratulations.

Congratulations, and what a wonderful day to finish them on!

Good report and some lovely photos

Brilliant Mamoset, congratulations on the achievement - and what a way to achieve the close out, a clag free beauty of a day in the best of company in an area deserving of the honour

Congratulations! and what a day to complete them on. I don't think there are many better views in the Lakes than the one from Hard Knott. Great report as well.

Thanks all for your kind comments, now if only the Government would drop the petrol price, I might be able to give the Munros a proper go

Great report and what a beautiful day to complete the round, congratulations to you both.

Do you now need to accompany your son so he can do them all?!

Well done on completing the 214.

Harter Fell's summit is a great spot for the "finish line", especially in that weather.

What next, all the Munros?

Harter Fell's summit is a great spot for the "finish line", especially in that weather.

What next, all the Munros?

I'd like to do more Munros, time and cash being the only stumbling block

yokehead wrote:Great report and what a beautiful day to complete the round, congratulations to you both.

Do you now need to accompany your son so he can do them all?!

My son will be accompanied as often as possible, not sure on a full second round, couldn't take the back of Skiddaw fells again

Well Done Mamoset...great accommplishment and a great day to finish them up on!! Brilliant!

Cheers skuk, guess i better get started then