We had been tempted by Ben Ledi every time we drove past it on the A84. Something we have done quite a bit of lately, going to and from Skye.

So with today's weather set fair but not too hot we decided to give it a go.
We are slowly building up the height we are climbing (Ben Venue, Ben Cleuch) so this mountain seemed a natural progression. Moving up to our first munro (apart from The Ben) in the next few weeks we hope.

Parked as suggested in the parking space over the bridge and set off up through the forest. It was surprisingly cool to start with but the steep climb through the trees soon sorted that out.

We crossed the landrover / forest track and carried out on up the path, being passed by a sole walker and a couple, both of whom had that effortless stride that takes you upwards without apparently breaking sweat. Not so for us - I was in need of a sweatband fashioned from a neckerchief within minutes of continuing to climb. Followed the path up to the left and around the shoulder of the first part of the ridge, which we decided looked a good spot for coffee and a snack. A great view to Loch Venachar with Ben Lomond and Ben Venue just coming into view to the west. 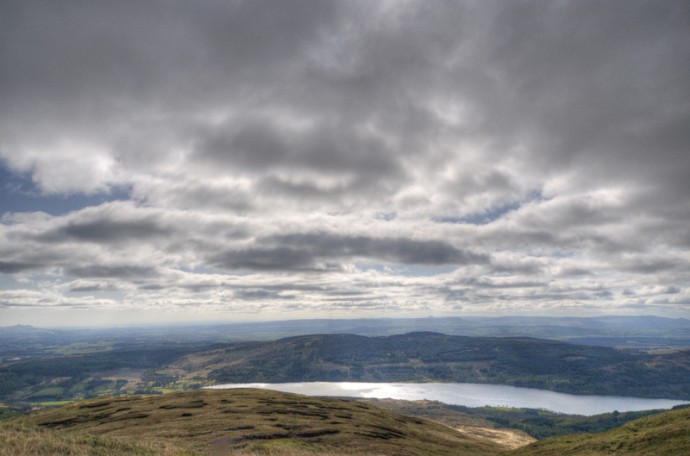 View back across Loch Venacher from our coffee spot

The path was now quite busy and we sat and watched many people walking up. Not all of them looking cool or walking with no apparent effort. Made us feel much better.

Onwards past the two false summits - good to know in advance - and eventually to the summit complete with the iron cross and trig point. It was here that my camera decided to give up the ghost despite new batteries. There were fine views in all directions. 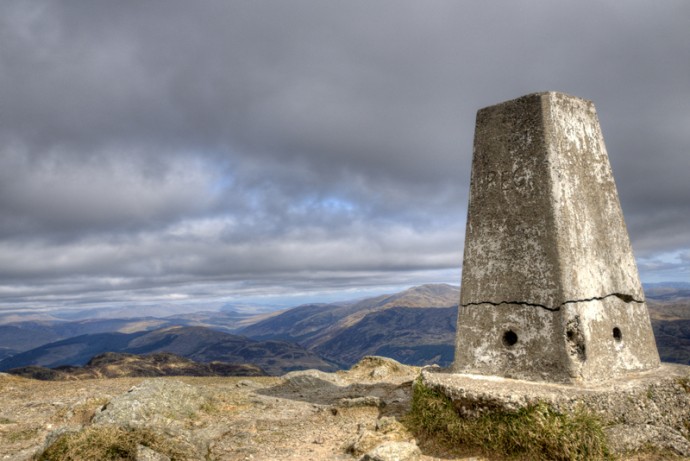 Trig point with mountains beyond. Don't know these hills yet but will have fun getting to know them over the next months (and years) 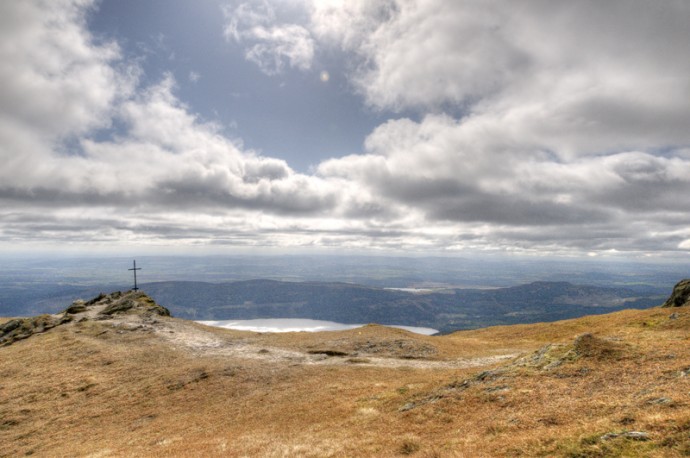 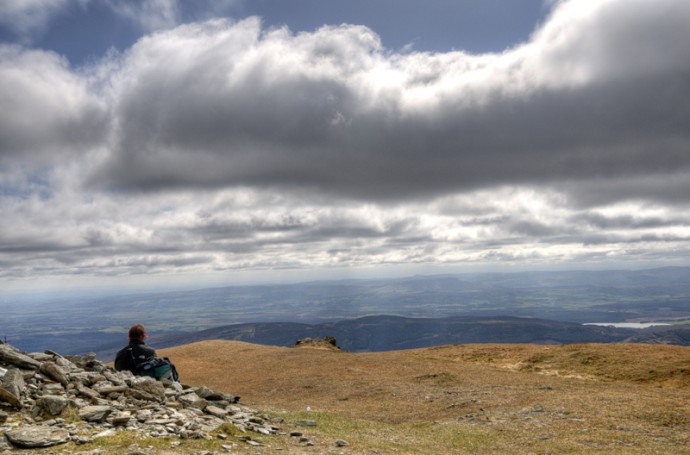 Me sitting at the summit cairn, mourning the loss of a functioning camera. Thanks to Gary for the use of his photos.

I had printed out the WH route and we decided that as we had made quite good time to continue on the ridge and return via Stank Glen. This we did, but via the route that WH does not recommend. From the last high point of the ridge, we carried straight on and followed a narrow, steep and rocky path which stays close to the edge but is not too dodgy. Eventually met and followed a small stream then crossed it and continued to descend steeply. We had our lunch next to the stream, enjoying the sun and the peace and quiet.

At this point we could see the larger path coming down from the bealach. There was a tricky section right at the bottom of the path we were following where, after ducking under a wire fence, you make your way steeply down through thick heather and boggy bits until you have no option but to slither down some slippery rocks into more deep mud. Would not try this route if it had been anything like wet. The main path is very close at this point and a final traipse though splintered logs and wet ground got us there.

Sat on a convenient rock for a drink and watched several more people struggle on this last bit. Then on to the track and back through the forest. Although we did miss the way back to the car via the lower track and has to climb again until we met our outward route.

Very warm walking back on the forest tracks and glad to see the car.
I enjoyed this walk and we would try it in the opposite direction next time (on the main path!)