We had decided that Scafell Pike was a realistic target for the children having proved their stamina on Helvellyn last year, but I didn't want to just go up and down the 'tourist route' along Brown Cove - and I also wanted a chance to 'tick off' another Wainwright for myself by going via LingMell. Having decided that walking from Eskdale would be just too long, we chose the Piers Gill route as it sounded like the most interesting routes from Wasdale Head. Wasdale Head on a beautiful morning

Set off bright and early to make sure we had plenty of time - left Wasdale Head car park just after 9am. Weather was beautifully sunny as we set off but we had made sure we were equipped for the colder weather we expected at 3000 feet. 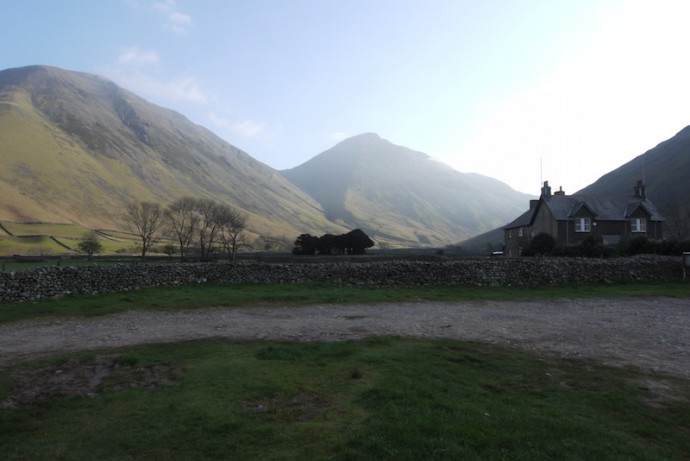 View up the valley from Wasdale Head Heading up the valley

The walk starts off very gently with a long walk along the valley round to the 'back' of Lingmell. Some beautiful pools in the stream for the dogs to swim in, and great views of Gable all the way. Crossed the stream at the watersmeet (which is every bit as lovely as Wainwright says it is) and headed up towards Piers Gill - this is there the ascent started in earnest. Piers Gill is quite spectacular up close (though not too close - not too good with heights these days, and I don't enjoy watching the kids walk next to sheer drops...). All was proceeding nicely until we found our way blocked by a crag... upon checking Wainwright we see 'some uncertainty' was expected at this point but that the crag should be surmountable with no more than easy scrambling... It didn't feel particularly easy at the time, though to be fair it would have felt a lot easier if we hadn't had to push/pull an overweight labrador up with us... When we got to the top of the ascent we had chosen we saw that the path led away from a completely different part of the crag, so perhaps there was an easier way up a few yards to the right. Piers Gill with Lingmell behind. Awkward section seen to the left of the Gill.

The next section of path was a little unclear - I think a few people had decided to keep well away from Piers Gill and cut the corner off. Eventually we could see the corridor route and where it crossed the head of Piers Gill ahead - from this angle it looked like the crossing would be treacherous but when we got there it was tame enough. 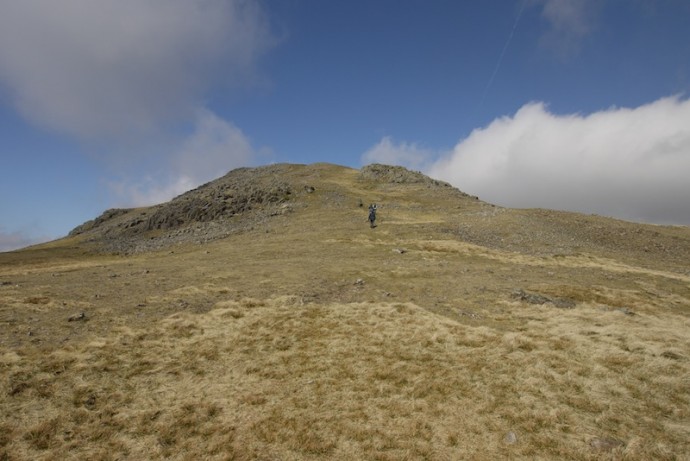 From Lingmell Col up to Lingmell was a pleasant walk on an easy path and we stopped for lunch at the top amid glorious views. Scafell and the Pike had been in cloud up to this point but it cleared as we sat. Scafell particularly impressive from this angle, Scafell Pike just looked big... Scafell and the Pike from Lingmell. Note the motorway...

The ridge walk from Lingmell fo Scafell Pike is dismissed by Wainwright as 'a tedious half hour' and he was not too far wrong (though it took us a bit longer - we are not fast walkers). There was a huge contrast between our path up to this point - completely solitary on narrow and sometimes indistinct paths - versus the wide and busy motorway we joined for the final push to the top of Scafell Pike. And so many cairns! Top was a little cloudy at first but cleared occasionally enough to see some great views. Ate a second lunch in one of the many wind-shelters.

Lorraine was all for carrying on to Scafell, but there wasn't really time or energy available, nor is there a route that would be practical with the dogs. But we decided to descend via Mickledore to get a closeup view of why our progress was blocked.

The path that descends from Mickledore to Hollow Stones is very loose, with a couple of tricky sections for the dogs who needed a lot of persuasion and a couple of hard shoves. I think we all fell over at least once on the scree, but fortunately ecsaped without injuries. The dogs were starting to get a bit tired by this point, particularly Sapphie - I think they were also thirsty as we had not passed any running streams or tarns since we left the valley route and set off up Piers Gill.

The descent through Hollow Stones and back down the Brown Cove path was tedious. The rebuilt paths may be necessary to be able to take the traffic of a busy route like this but I find them no fun to walk on and very hard on the feet. Eventually we reached the parting of the paths to the two Wasdale car parks, and the path around the shoulder and down to the car park at the green was great relief.

Felt like a lot longer than the 6.5 miles the GPS reported.

Great stuff, love to see kids on the fells and nice to get a view (spent over half the time in drizzly clag when we climbed the pike).

Great report, not done this route before so one for me to look up in the future! Like JK said...good to see the kids up there as well!!

Nice route - I haven't done Piers Gill or the Corridor route yet, I keep meaning to, just always end up doing a different one! lol.

As for the Scafell route - your dog will eat Lord's Rake up. Todd was up and down it like a yo-yo when we went up. He even attempted the West Wall Traverse whilst I had a breather at the top of the first section!!

Remember they have 4 wheel drive!

Excellent route, Richard, perhaps the best way up those two from Wasdale.

Sounds like you preferred the ascent to the descent though. An alternative would be to climb Scafell Pike first after Lingmell Coll, come back over Lingmell and down it's west ridge to Wasdale. A bit more retracing of steps perhaps, but it's a good way off Lingmell with beautiful views in front. Going down that way after coming up by Richard's route is a top way to do Lingmell on it's own for a half day's walk.

Enjoyed reading your report and seeing the photos of a route I know well. So glad you all went up to the summit

Great to see a family out active in the hills, some great views too but the 'huddle' at the top is a cracker of a pic, really tells a story - great stuff

simon-b wrote: An alternative would be to climb Scafell Pike first after Lingmell Coll, come back over Lingmell and down it's west ridge to Wasdale. A bit more retracing of steps perhaps, but it's a good way off Lingmell with beautiful views in front. Going down that way after coming up by Richard's route is a top way to do Lingmell on it's own for a half day's walk.

Hi Simon (if you're still a member four years later),

We're planning to bag Scarfell Pike this coming weekend, and we prefer challenging routes (light scrambling, drops to get the heart going etc.) to tourist routes, although we are mountain walkers, not mountain climbers. I'm interested in your alternative above, and am wondering if this website illustrates the same route that you recommend? > http://www.leaney.org/journal.php?id=314 Thanks.