Jelly Legs on the Cobbler

Jelly Legs on the Cobbler


The weather forecast looked pretty good for Saturday - certainly good enough to drive through to Arrochar and attempt a new hill. Now that I am down to single figures of Corbetts left (including 2 on the islands, 5 in Knoydart and Ben Loyal in Caithness) this was the obvious choice for a day trip.

Leaving Dundee at 7am and travelling via Crainlarich, I was at the car park at Succoth by 9.10 am and walking by 9.25 am. It was a cracking day and the car park was very busy. Having spent a lot of time last year tackling remote Corbetts and seeing hardly a soul, Saturday morning in Arrochar came as a bit of a shock !

I made my way up the well trodden track, so much much easier than my last walk up Sgor a Choire beithe. The weather was playing its part and after 40 minutes I came out of the trees and saw the hill ahead. Surely this has to be one of the most photogenic hills in the whole of Scotland ? 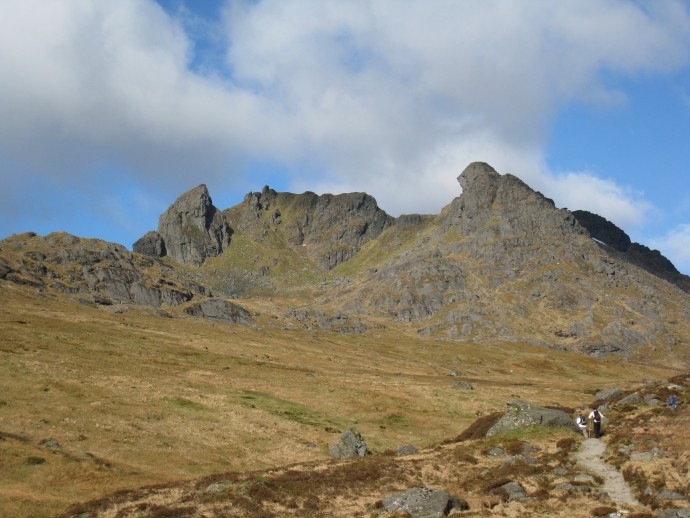 I followed the track past the Narnian boulders and then took the Cobbler track off to the left. The path gets a bit rocky and steep as you head into the corrie below the peak of the hill, but i was making good time and an hour and 35 minutes after leaving the car park I was standing on the top by the cairn looking at the wee climb I still had to do.

I wandered over to the edge and looked down the corrie slopes, and as I did so my legs turned to jelly. I have a very poor head for heights and the thought of what I had to do now was making my heart pound. I sat down and took a few deep breaths and tried to focus. 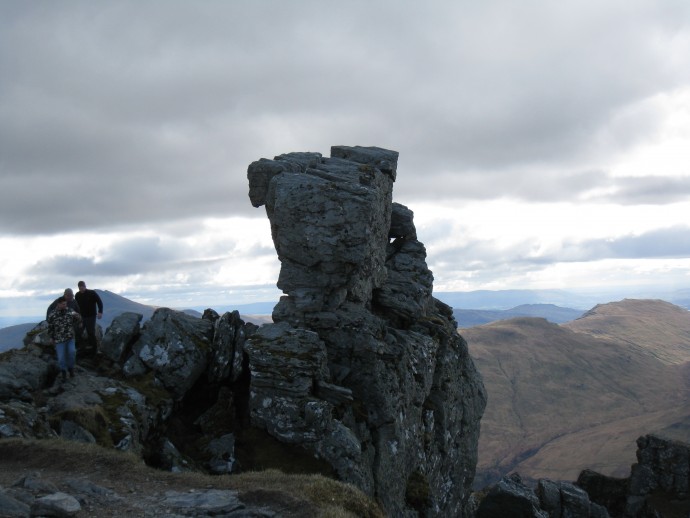 I went to the "eye" of the needle and crawled through. There's a decent enough ledge but what got me was the overwhelming sense of exposure as it's basically straight down on the right hand side. I thought to myself "just don't look down" and focused on crawling to the rocks at the end of the ledge. At that point I climbed up the rocks, and turned back towards the north, clambering up to the rocky crest. I have to admit i was shaking so much it was a relief just to haul myself half way up, touch the top, then get back down. Didn't even think about taking a photo. I kept telling myself just to concentrate and not to do anything daft. When I got back to the cairn my heart was pounding but I was elated. This is one day in the hills I won't forget in a hurry .....

Nice one, John. It's likely I'll be experiencing similar feelings when I get around to this one. Well done on getting through it, so to speak, and all the best for the remaining eight.

I was up there on Saturday too,did Beinn Ime first then The Cobbler, fantastic walk and was a perfect day for it..I had a wee look at that scramble but bottled it..next time though!!

Bl**dy well done for doing it despite the jelly legs. And a very honest account! I almost think you're glad you've got your feelings out, in writing!

Bet it was marvellous to look back and say "I did it", whilst the heart was still pounding.

Good to know you'll remember such a cracking wee hill, so close to starting your 2nd round of Munros and Corbetts.

Oh, and your account will put the fear in those who have yet to do it, and come across your report - nice one!

A real honest report as it takes a lot of guts to admit you were terrified. I did also did the South summit on the Cobbler (the one down below the 'eye'). It is a more difficult Scramble but with nowhere near the exposure. I found the worst bit on the 'eye' was when you first stick your head through the hole and see the drop on the other side. Anyway, here is a pic (seeing as you were otherwise engaged!) taken from the top looking towards the south summit. 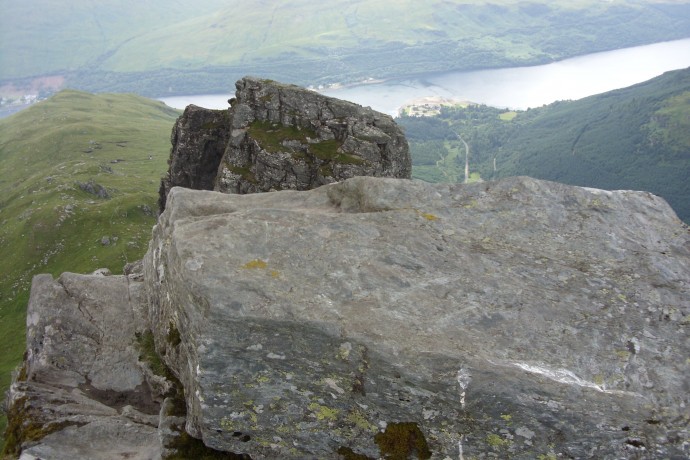 Great honest report on one of my favourites. It took me 6 or 7 visits to finally stand on the pinnacle for all of 2-3 seconds

Thankfully it's only a 30 minute drive up the road. Well done for facing your fears