After a busy February, managing to climb 25 Hewitts (mostly new ones), March was a bit less successful with only 2! The weather was looking a little poorer this weekend and I had some kind of stomach bug too, so I didn’t really get a great deal done. A short walk on Saturday was followed by these hills on the Sunday (managing to bring my April tally of Hewitts in line with the March one on the first of the month!).

The plan had been to head for the high mountains for a change – maybe the Glyders and Y Garn from Ogwen – but the cloud was lying thick over those summits, while looking more broken further west.

our_route.gpx Open full screen  NB: Walkhighlands is not responsible for the accuracy of gpx files in users posts
The Nantlle Ridge is a great traverse over some slightly lower hills, containing plenty of good scenery and a bit of scrambling too. We didn’t have time for the whole thing (although it is well described by Snowdonia7 – we may well have passed him somewhere along the way), but the eastern end had always made up a good short afternoon out in the past. 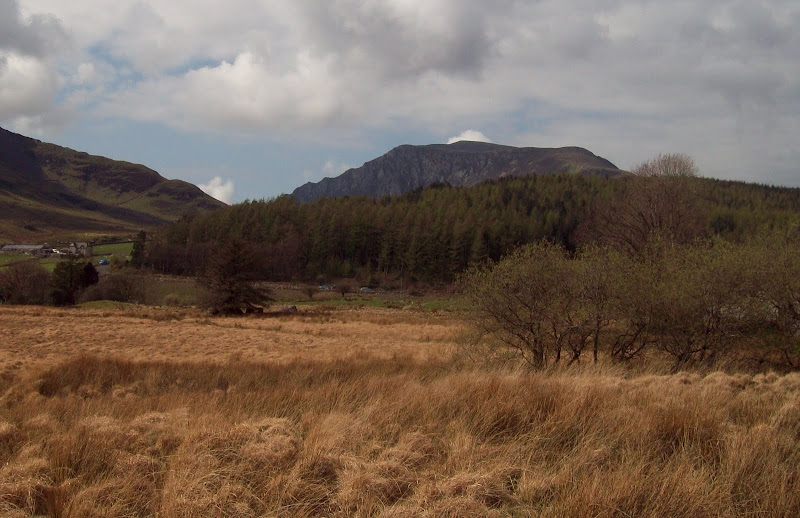 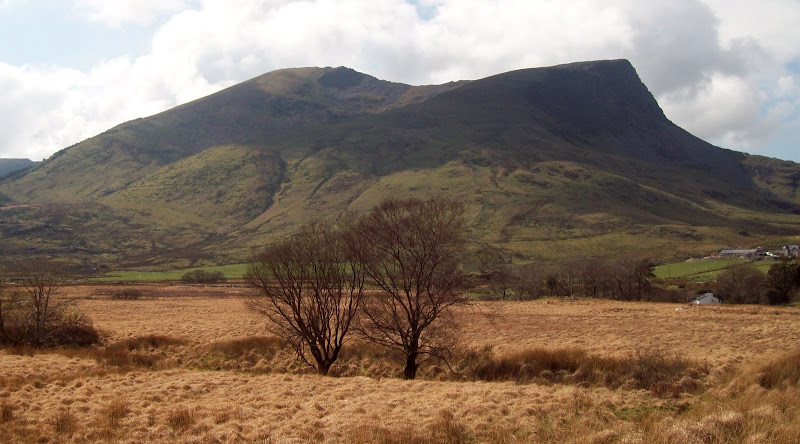 Dad and I were dropped off by mum in the main car park at Rhyd Ddu, before she carried on to Beddgelert Forest for a low level walk. We set off at about 2:40pm, our traditional late start no longer the problem that it had been all winter. A quick stroll past a cottage then Drwsycoed Uchaf farm had us on the ascent in no time. There were a fair few people coming down. 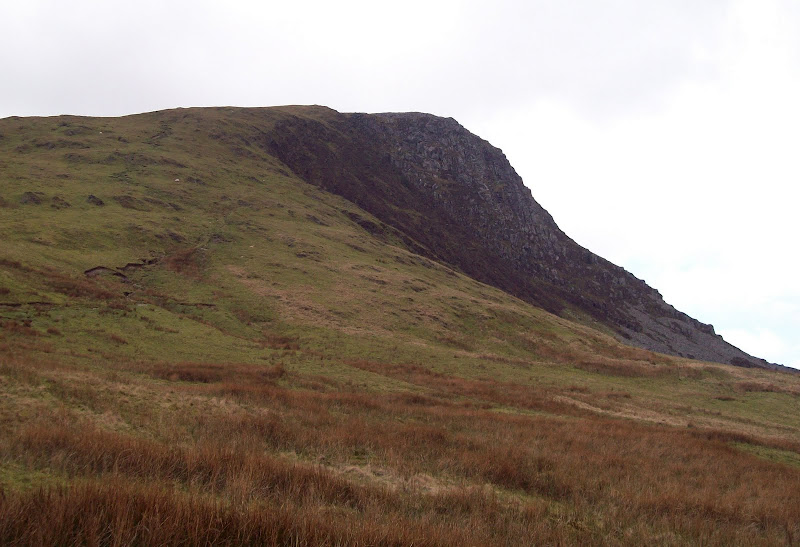 The way up was steep, but the recent dry period had dried out the small sections of bog, so it was quite an agreeable ascent. After crossing a wall, the summit cairn of Y Garn perches right on the edge of the crags in an airy spot. We stopped for a break here, admiring the scrambly section up ahead. It looks pretty imposing here, but is straightforward in reality, the most sustained bits being set back slightly from the sheer north-western cliffs. 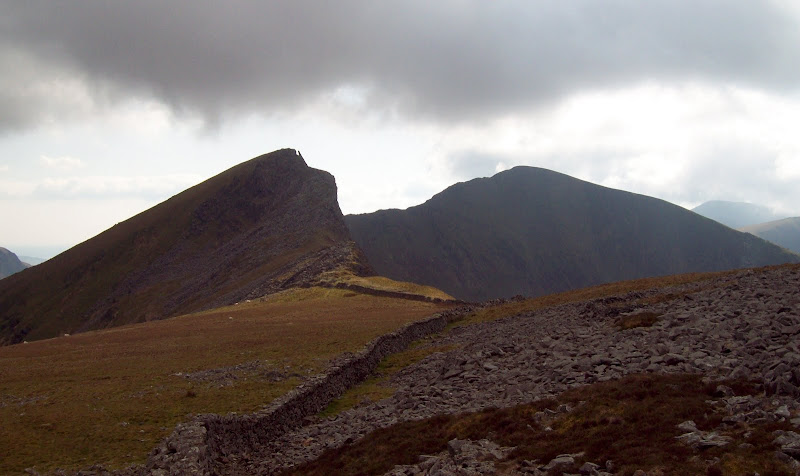 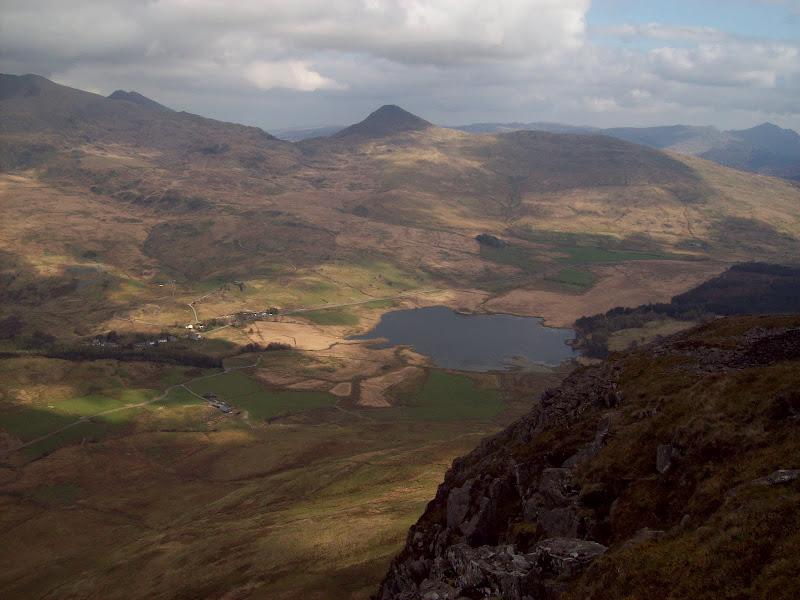 Across Dyffryn Nantlle to Mynydd Mawr: 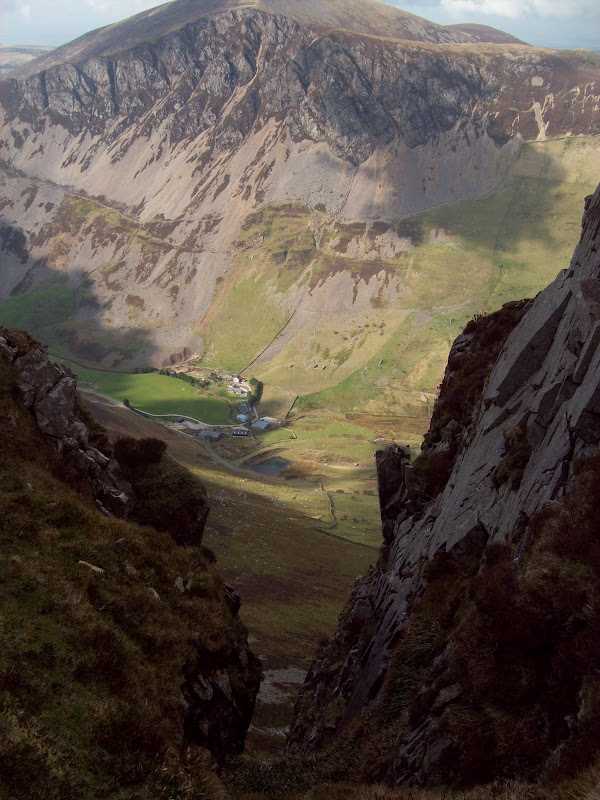 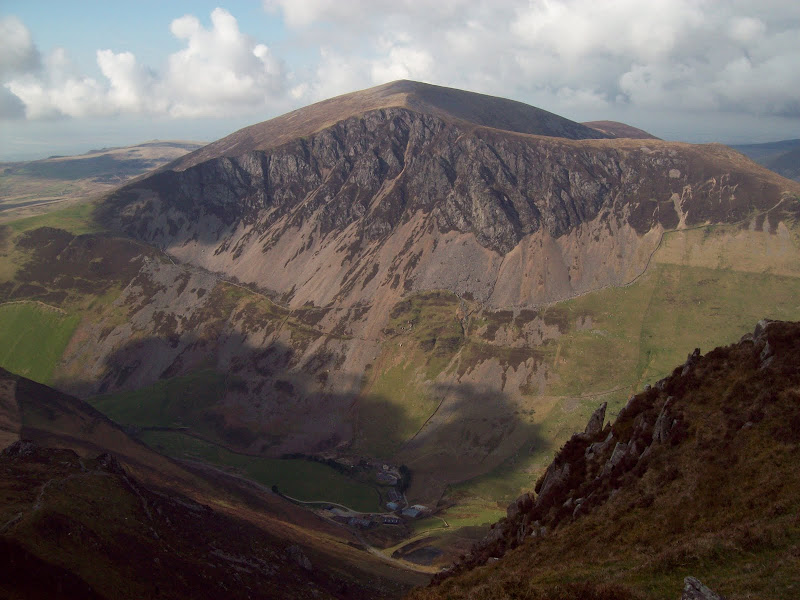 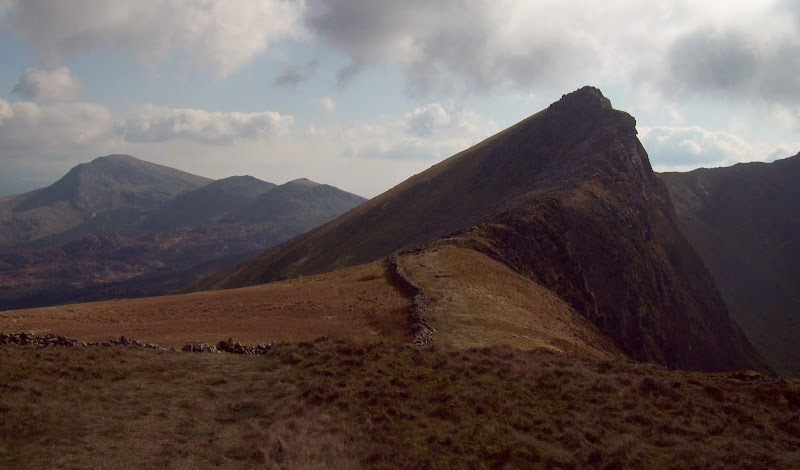 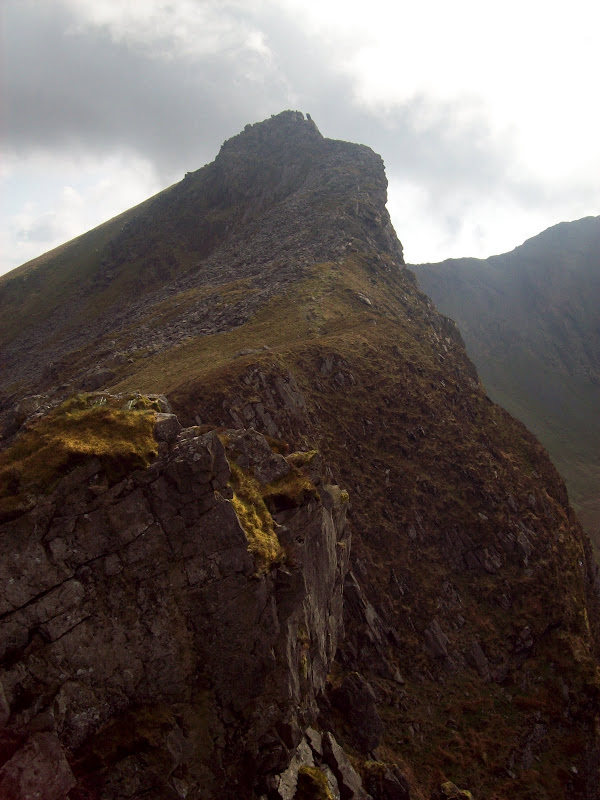 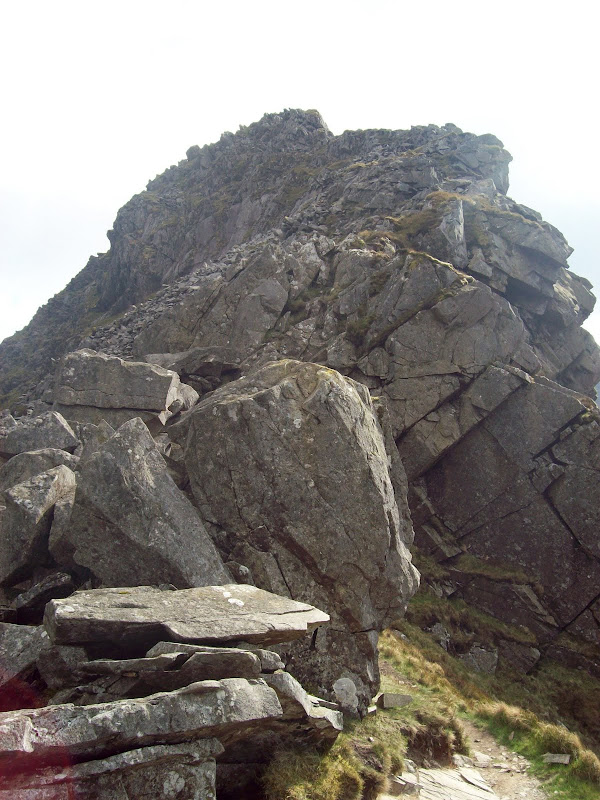 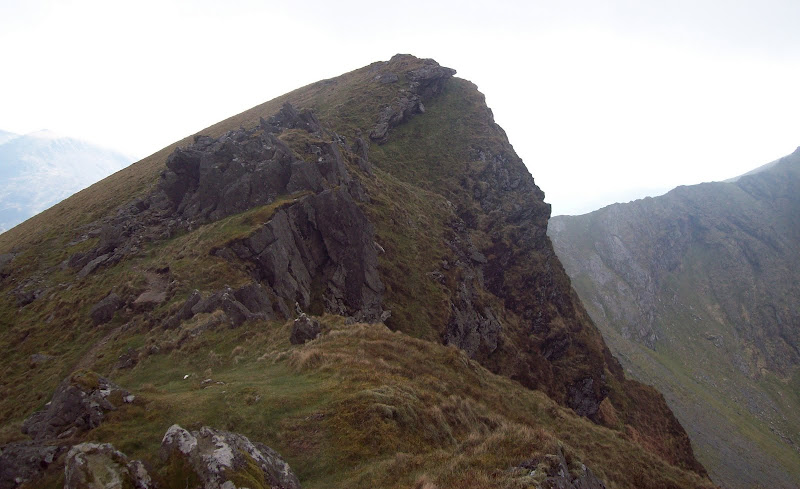 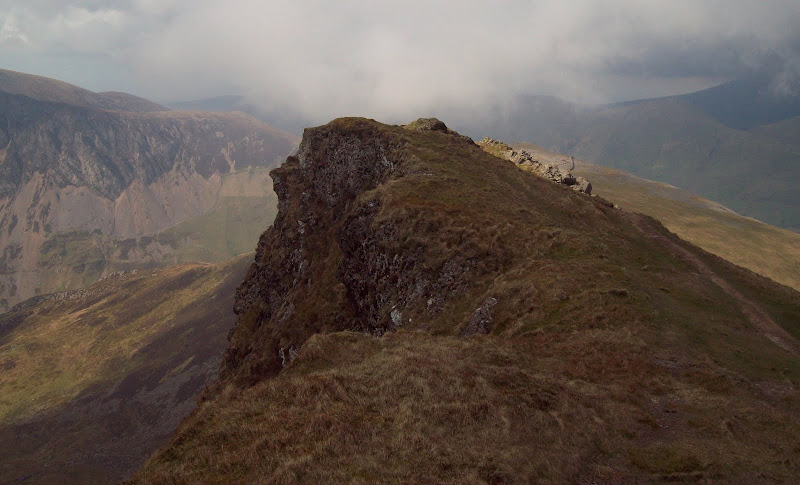 In contrast, the summit of Mynydd Drws-y-coed is grassy, lacking even enough loose rock for a cairn. An easy descent and another group of walkers passed, and we were on the way up Trum y Ddysgl, the highest summit of the day (and second highest on the ridge). This section of the walk is very reminiscent of the summit ridge of Ciste Dubh in Kintail. 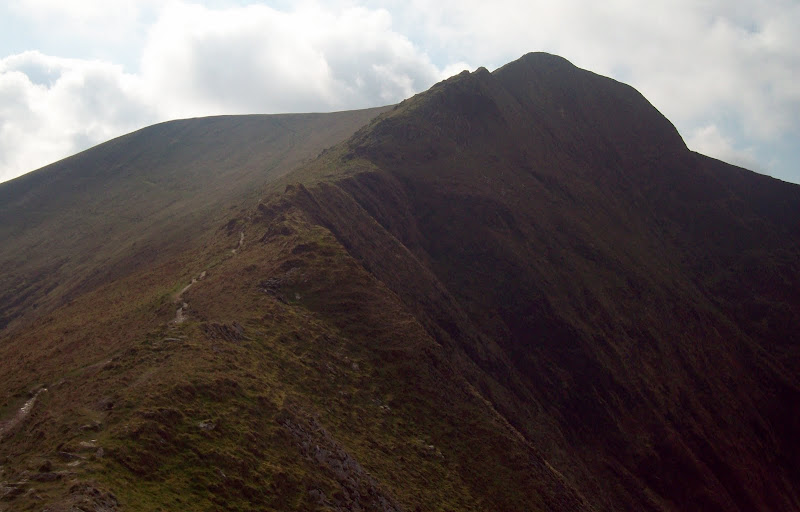 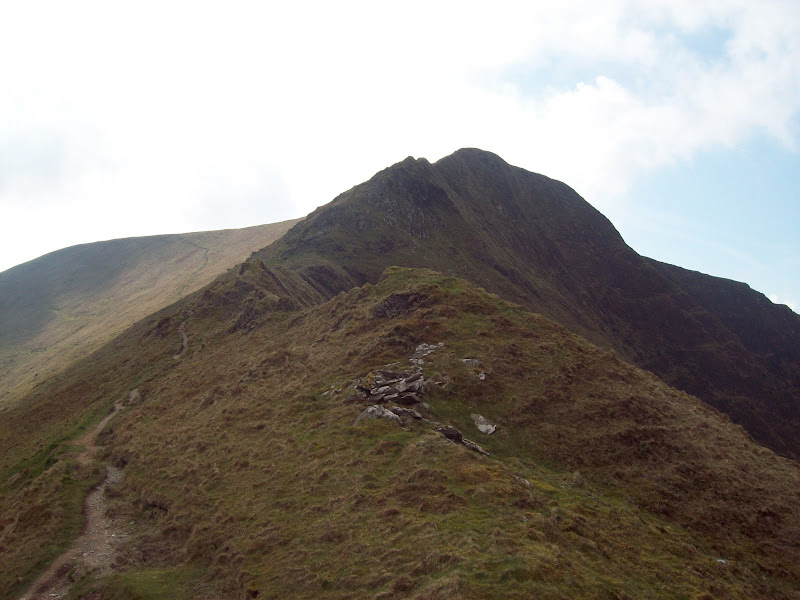 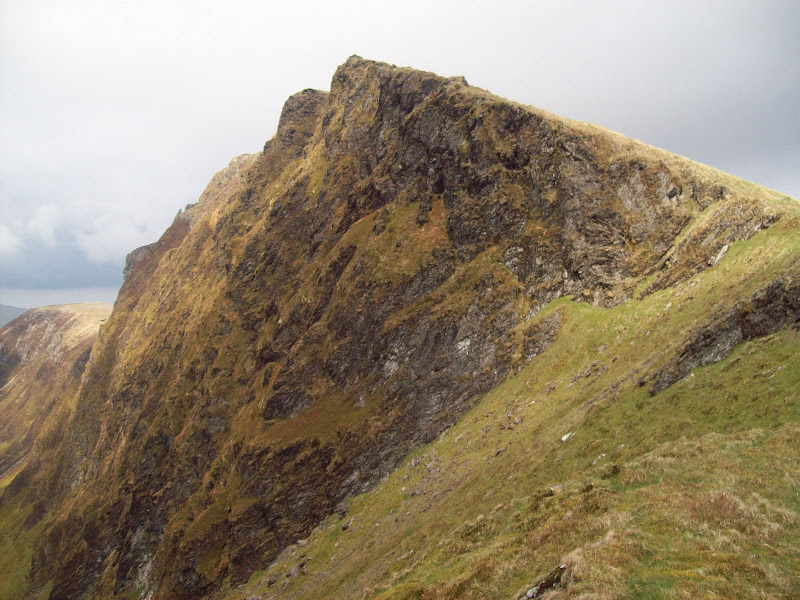 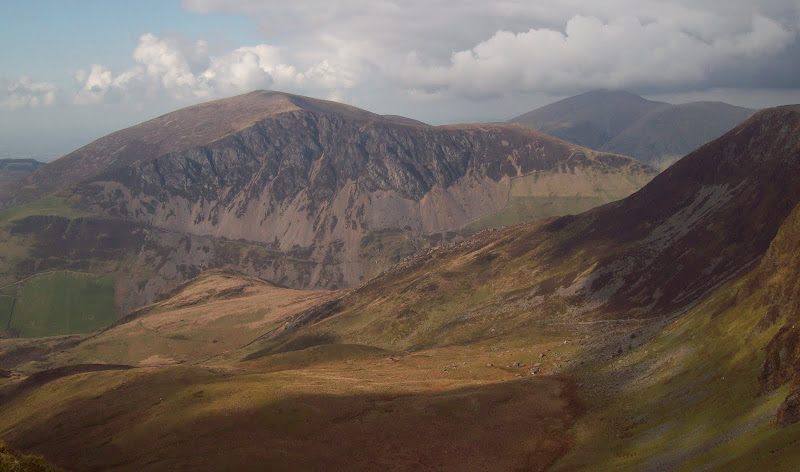 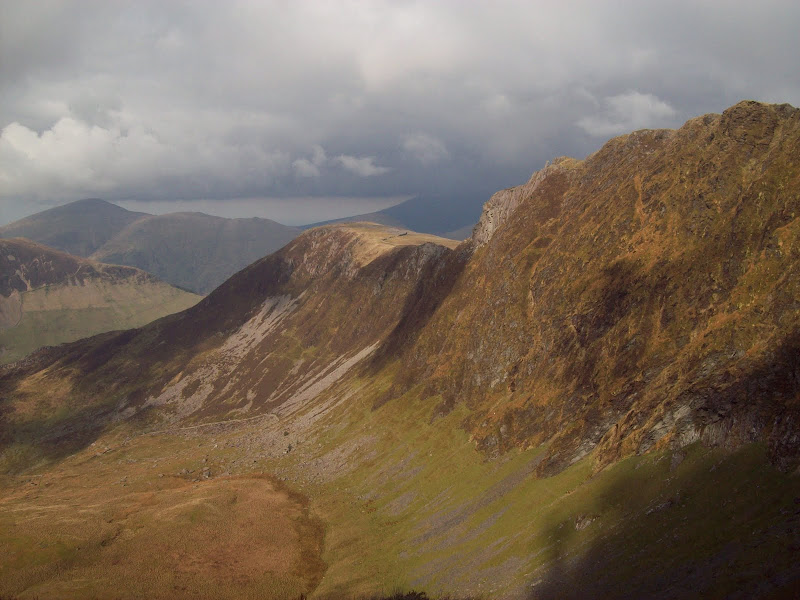 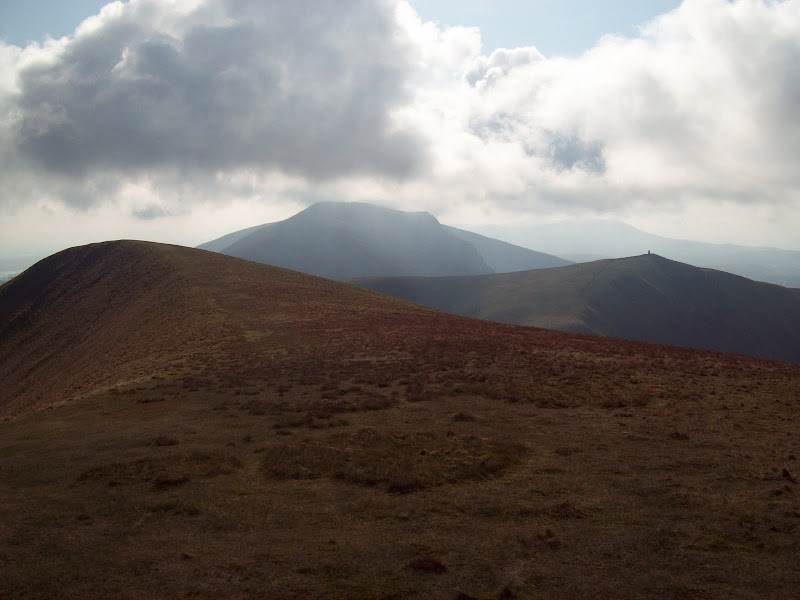 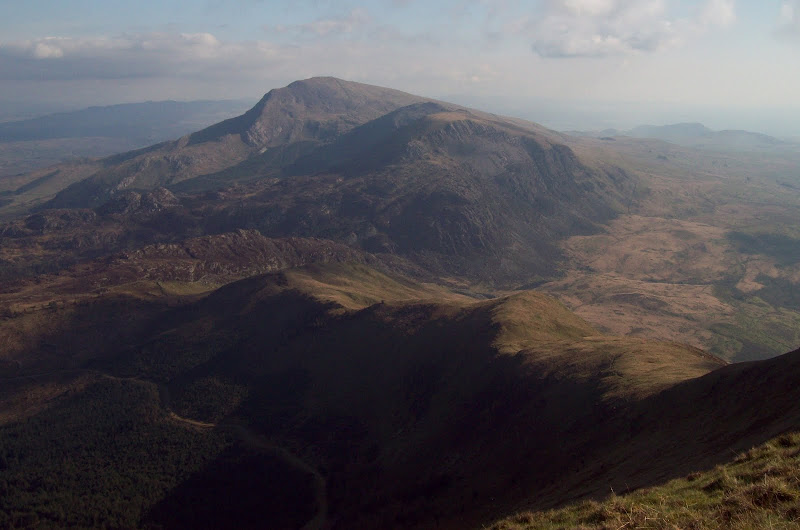 Fires on Craig Cwm Silyn (on the left): 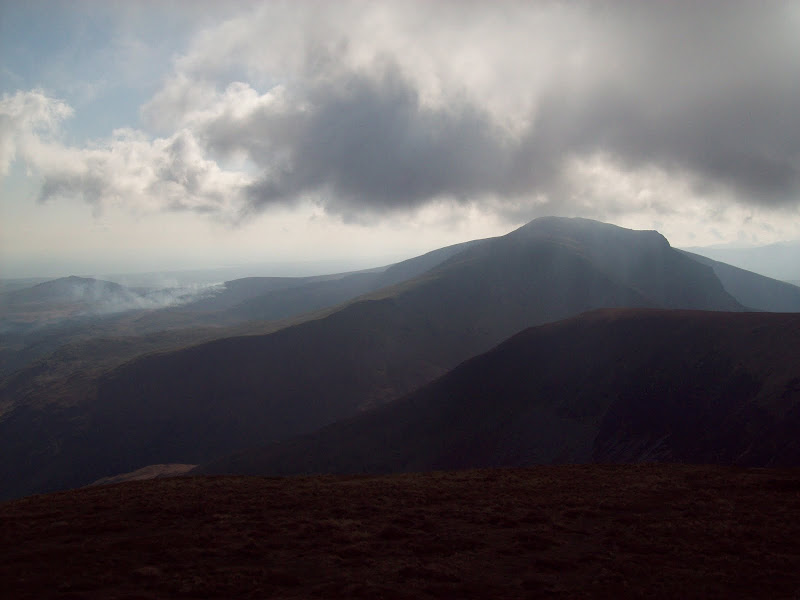 The light was improving all the time, and fires were visible on the southern flanks of Craig Cwm Silyn. The summit of Trum y Ddysgl is again lovely and grassy, with the high point right on the edge of a precipice. We briefly debated continuing to Mynydd Tal-y-mignedd, but we were taking things fairly easy and time was ticking on, so we dropped down the steep southern spur of Trum y Ddysgl. 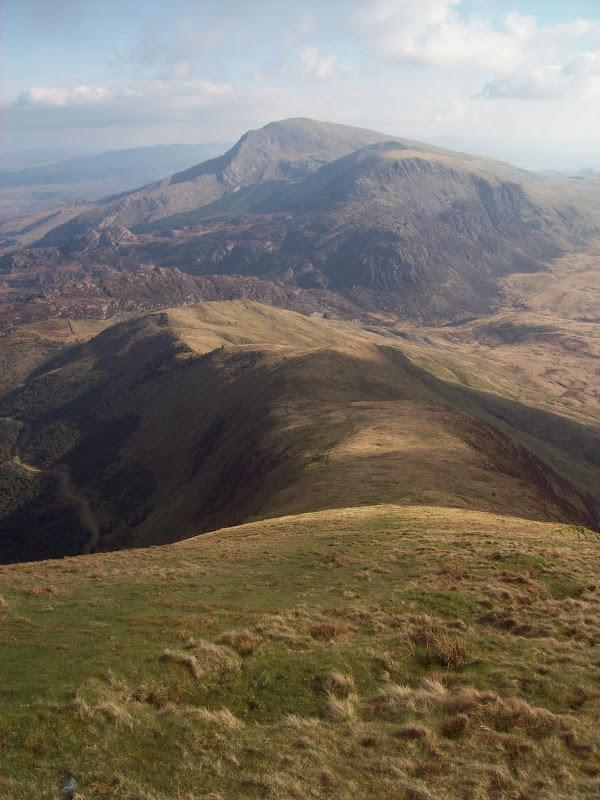 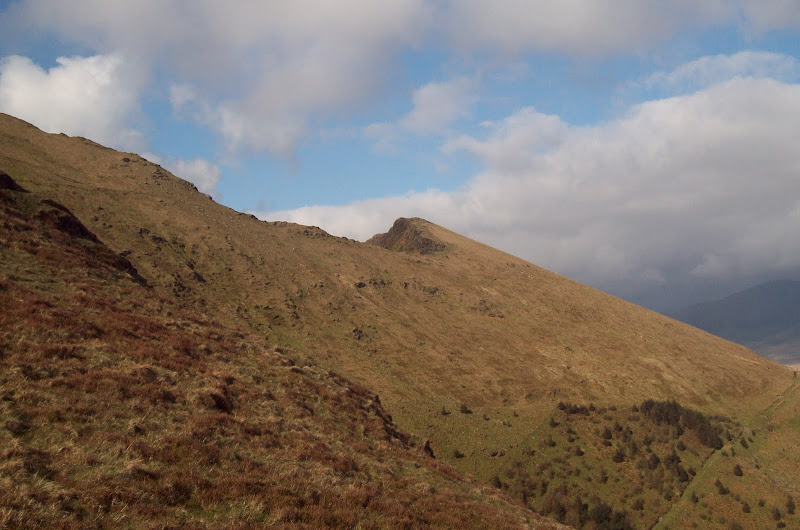 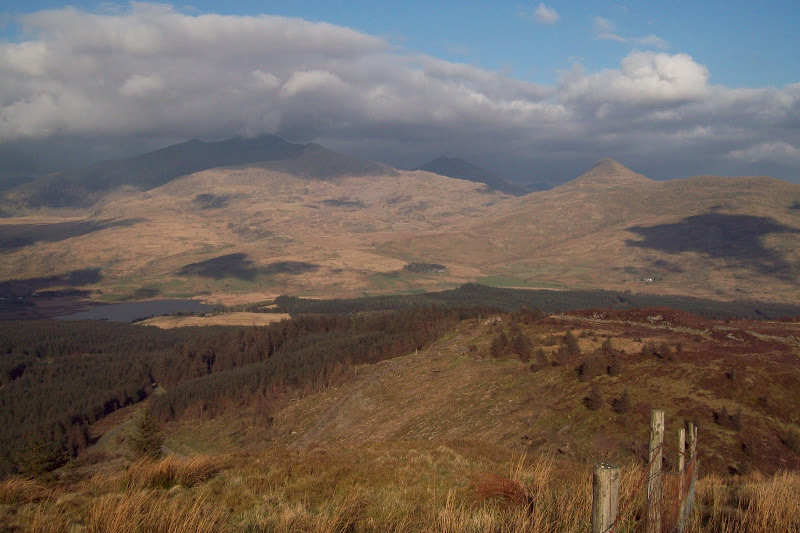 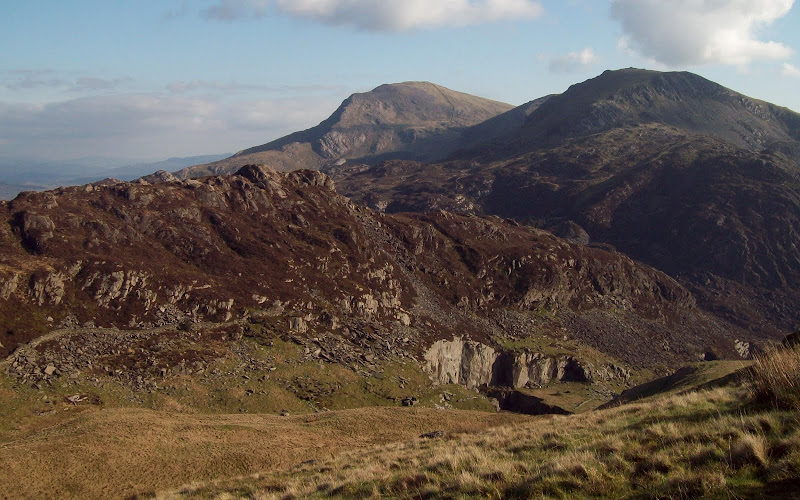 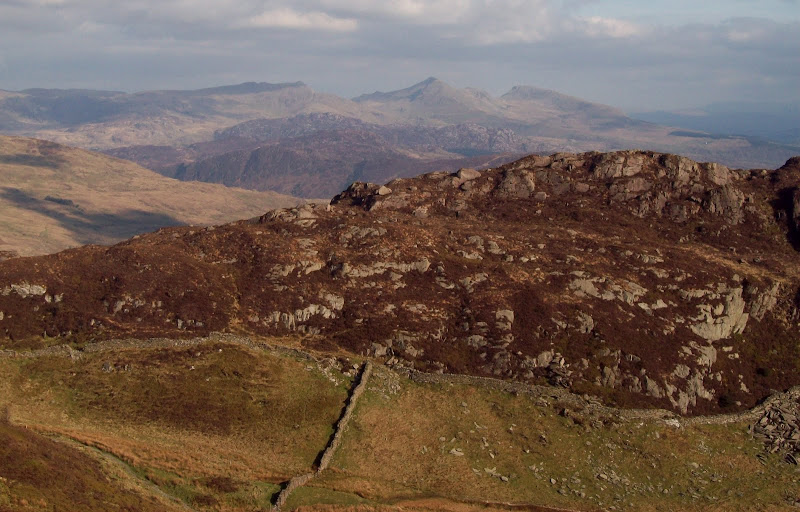 Another break at the col of Bwlch-y-ddwy-elor, before we decided to take the more scenic route back. Descending Cwm Trwsgwl a short way to the quarry workings, we had Craig Cwm Trwsgwl towering menacingly over us. A small path left the quarries and wound through rough terrain, leading back to Beddgelert Forest over another col. This area was intricate and beautiful, with rock and heather mixing well with the odd conifer. If we could have added a bit of snow to the scene, it would have looked like something out of one of ChrisW’s Canadian Rockies reports for a second. 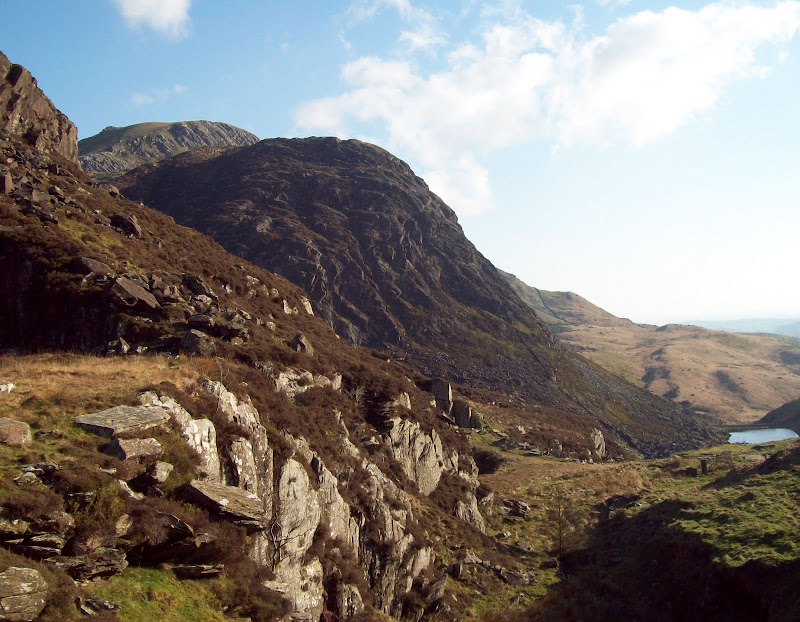 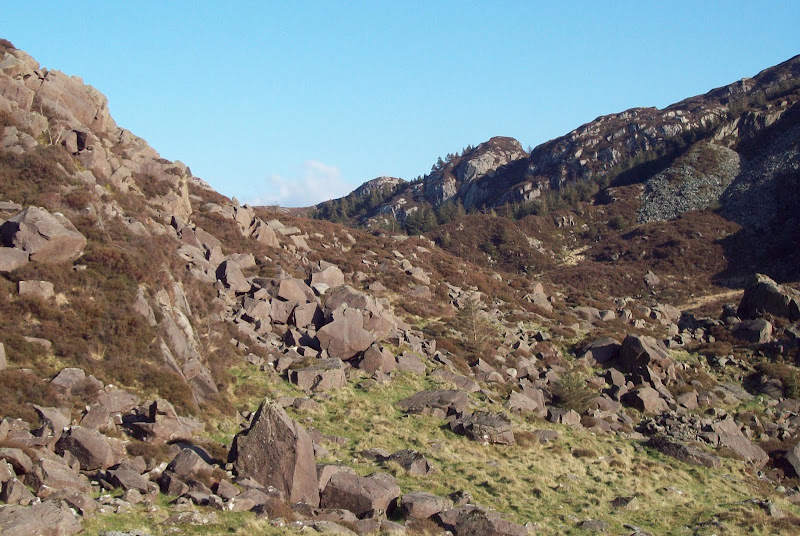 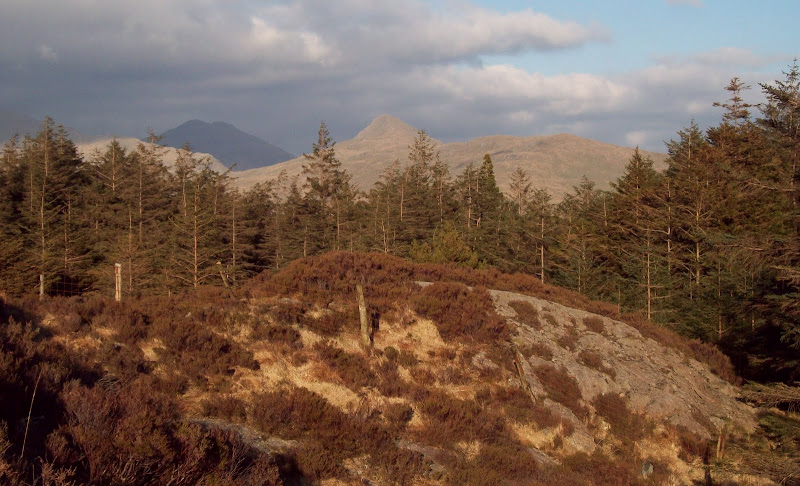 Descent into the forest brought us to our first significant bog of the day, but this was avoidable. The route back through the forest was fairly confusing. I used to know my way around here, but I have forgotten it now. We passed the tiny Llyn Llwelyn, a nice spot, and carried on down tracks until we crossed the narrow gauge railway. A short ascent through the woods on the other side brought us to the main car park, where mum was waiting, having finished her walk a little earlier. 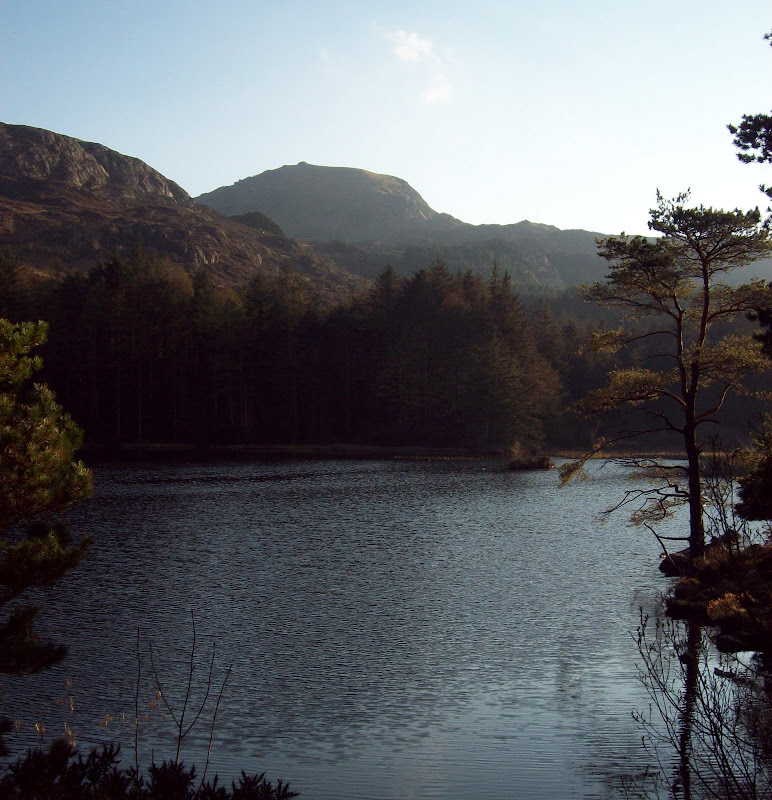 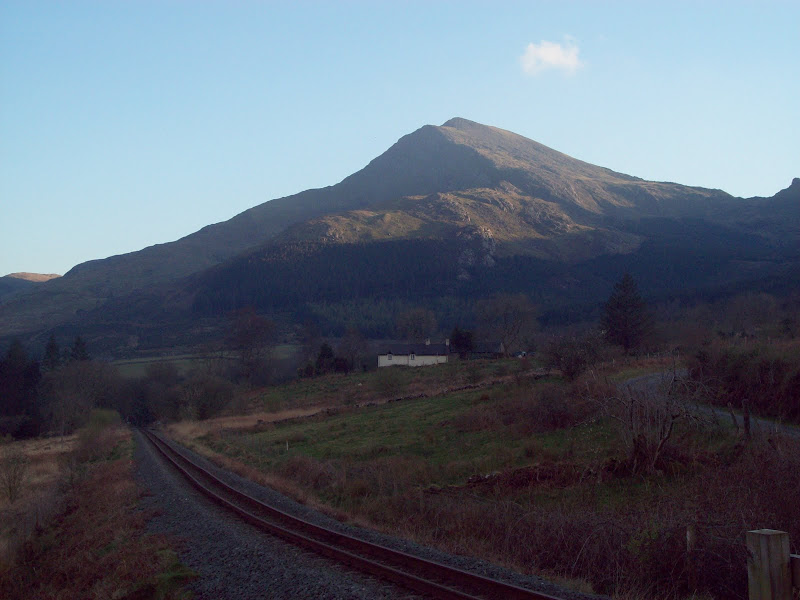 Another real stunner Malky, glad to see your Dad ensuring the now customary late start (I had one myself today) I love the first shot 'Across Dyffryn Nantlle to Mynydd Mawr' it feels like leaning forward would have seen me falling into it. In fact the colours and quality of all of these pics is top notch. I was looking at the shot of the "Scrambly bit on Mynydd Drws-y-coed" thinking if that had a good coat of snow it would have looked like the ridge I was on today....low and behold you thought the same on a shot a little later (you're right too). When you said "the more scenic route on the way back" I thought 'really' this is going to be good.....I wasn't disappointed, what a beautiful hike on the best of days and with the best of company too, glad to see the weather holding out there, my mate sent pics of snow in Aberdeen today

.. really enjoyed this, even if your dad puts me to shame

Nice report and great photos once again. Although I've resolved to try and take more photos when I'm out in the hills I just don't think I have the eye to 'see' what will make a good picture.

I've replayed the trip back in my mind to ascertain if we did pass, but along the section where we both walked I only passed a young couple and a fairly large group of young girls, so guess you were already heading down by the time I got there.

It's a smashing little walk along the ridge that despite living so close I've never done before (i've never been up Mynydd Mawr either yet).

Looks a great way to spend an afternoon. Is there any real exposure or technical difficulty on the scrambling section? Might be tempted to give that a go when we're off to Snowdonia in July.

. I never know how these photos appear to other people. The look fine to me on my laptop, but really dark on my PC at work!

snowdonia7 wrote:I've replayed the trip back in my mind to ascertain if we did pass, but along the section where we both walked I only passed a young couple and a fairly large group of young girls, so guess you were already heading down by the time I got there.

I didn't think I'd seen you either, based on your photos. However when we were sitting next to the large cairn on Y Garn (about 3:30pm), we saw some people dropping down the scrambly section of Mynydd Drws-y-coed, but they never passed us. Might have been you - I'd imagine you wouldn't have bothered visiting the summit of Y Garn a second time.

johnkaysleftleg wrote:Is there any real exposure or technical difficulty on the scrambling section? Might be tempted to give that a go when we're off to Snowdonia in July.

Not really - everything but a couple of short (3m high maybe) sections are avoidable to the left, and even those parts aren't very steep. A fair bit easier than Crib Goch or Tryfan. That said, my mum had a bad time on it a couple of weeks ago apparently. It was a bit wet and she doesn't like scrambling though, so I'm not surprised really. It's a great circuit though. Lots of variety in a very short distance, and without too much ascent

Great report Malky and some stunning pictures as well!! Note to self...organise a trip to North Wales!!