Track_HARTER FELL 2012.gpx Open full screen  NB: Walkhighlands is not responsible for the accuracy of gpx files in users posts

The snow that had been threatened yesterday finally arrived last night, giving a beautiful dusting to the peaks. A glorious morning greeted us, though it was pretty cold and the wind was loud and bitter. We all dressed up in lots of layers and set off from the car park at the foot of Hardknott Pass, over the Jubilee bridge, and up the side of Harter Fell. 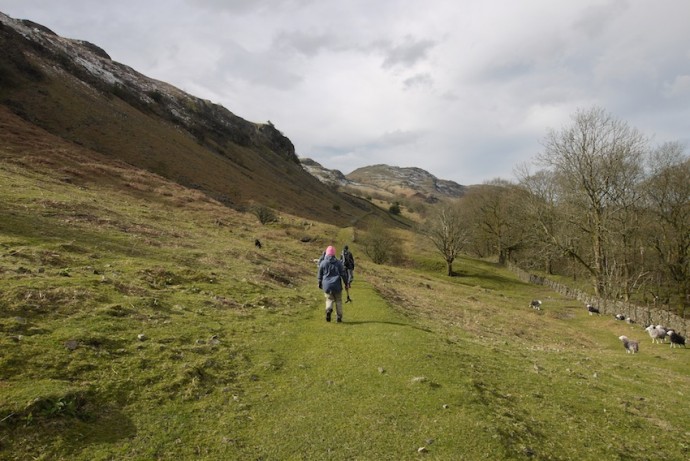 Setting off from Jubilee Bridge

It was fairly cold as we set off - the sheep were all sheltering from the wind. 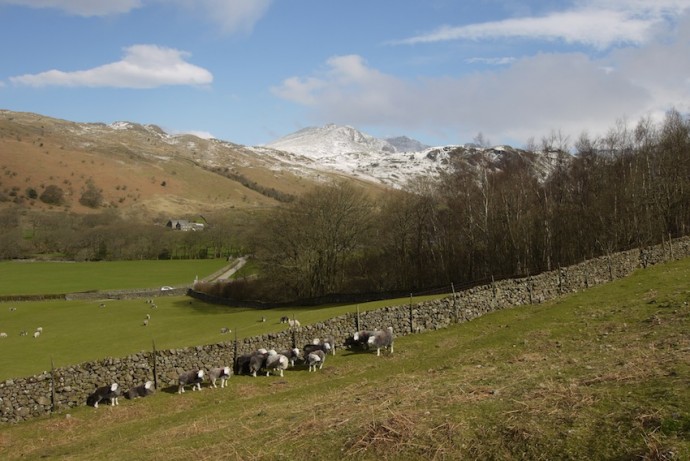 Sheep sheltering from the wind

The views back up the Eskdale valley were picture-postcard stuff. 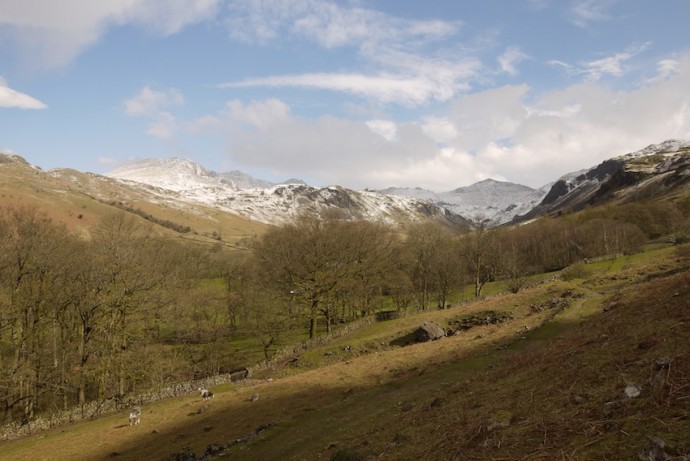 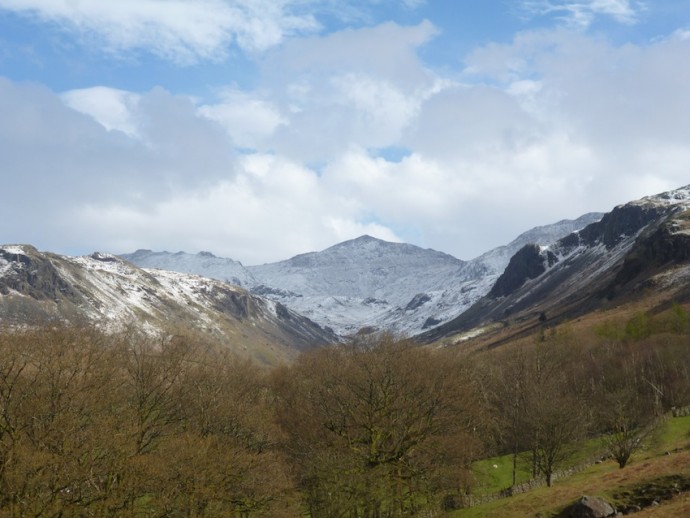 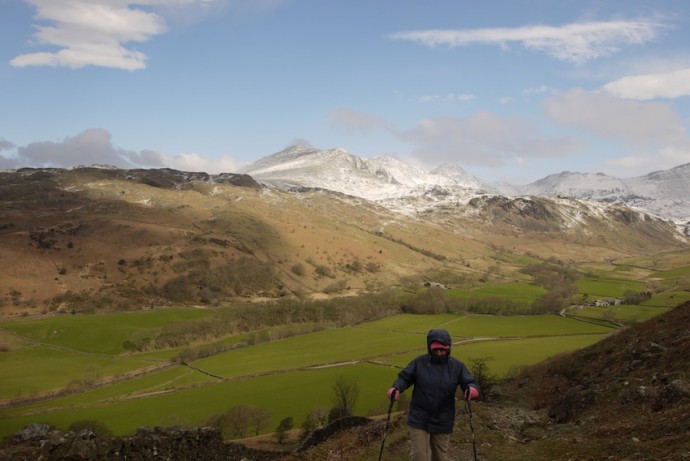 There looked to be more snow on Whin Rigg and Illgill Head than on the Scafells - maybe it just struggled to find a surface to settle on on the higher peaks. 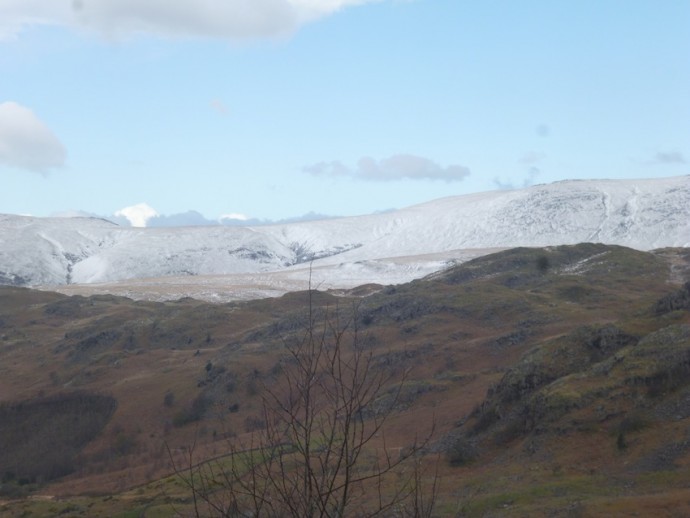 Lots of snow on Whin Rigg and Illgill Head

We headed on up Harter Fell. The path was surprisingly clear, which must have lulled us into a false sense of security as we soon noticed we were NOT on the path to the summit described by either Wainwright or shown on the OS maps, but rather on a path that seemed to be following the contours round. We briefly considered trying to cut across back to the path we had intended to take (you can see the wiggle on the GPS track) but in the end decided it was best to carry on as we would pick up the track from Birks to the summit eventually. In fact a little while later we did meet a good path (it seemed to be from Green Crag) that took us to the summit. 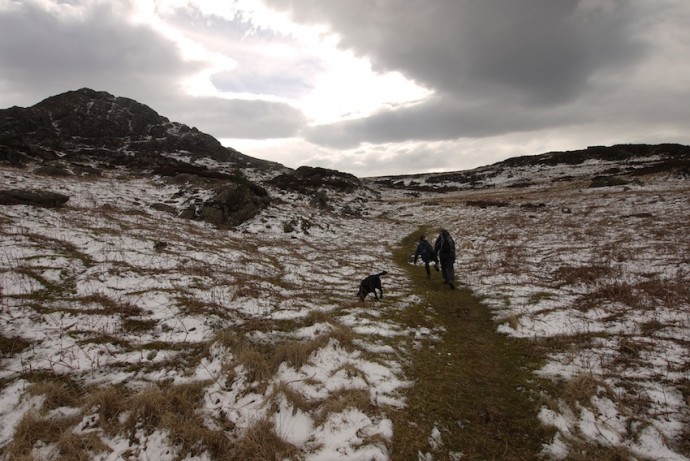 Why doesn't the snow settle on the path? 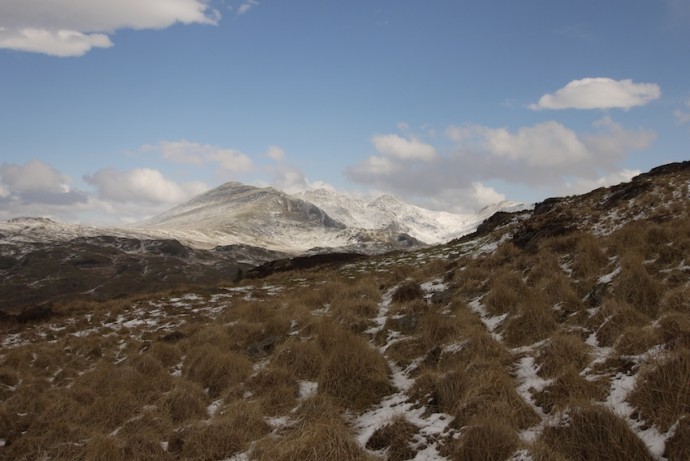 Keep looking back - the views just get better... 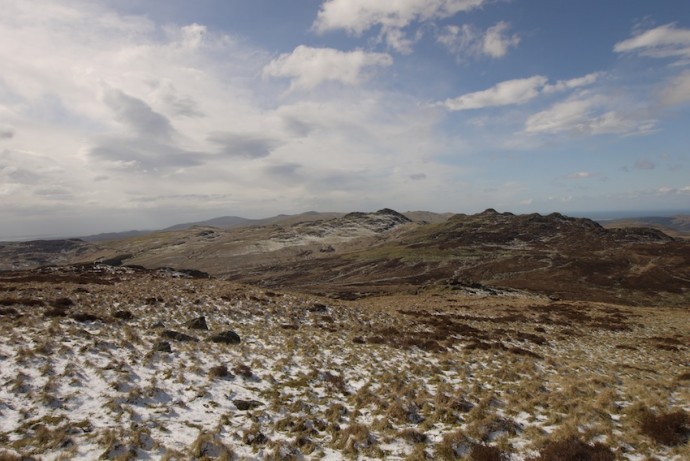 Green Crag didn't look like this two days ago...

The summit of Harter fell is lovely - there are three or four separate rocky tops, one of which (the 'official' summit) has a triangulation column, but the one next to it is clearly higher. At first it seemed that getting to the top of that summit might be beyond us as the first two sides we tried were not easy to get up with a 50mph wind trying to blow you off, but eventually we found a route up the far side that was simple enough, 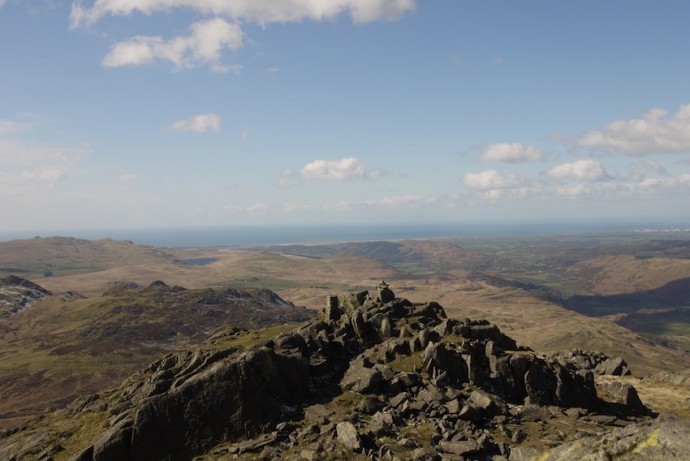 Official summit, from the true summit. 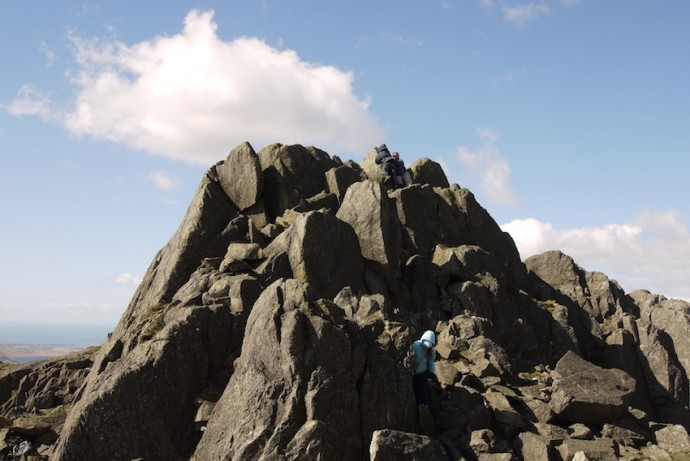 Just to prove everyone made it all the way up

The views from the summit area were beautiful in all directions: 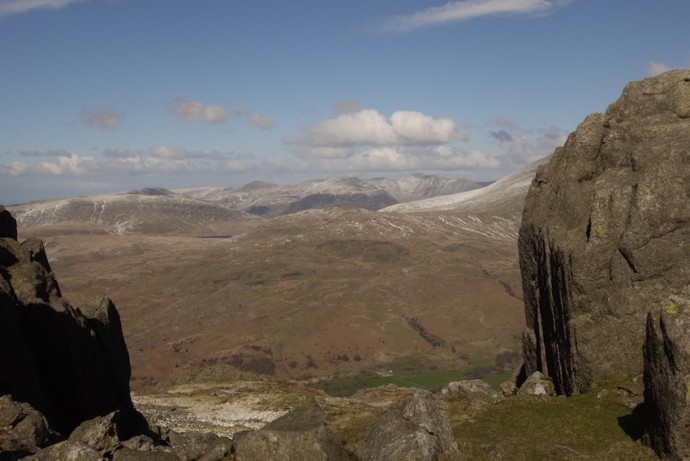 View from the summit of Harter Fell 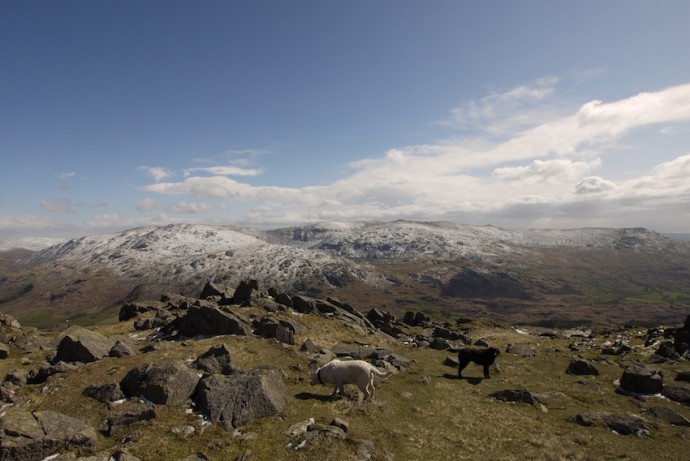 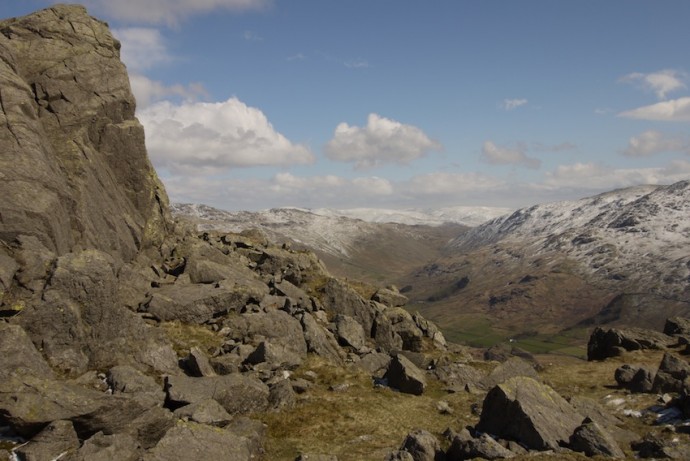 Fairfield in the distance (I think?) 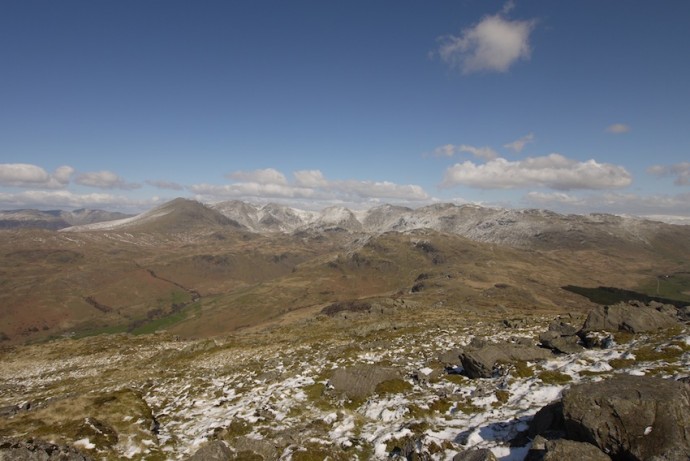 Head of Eskdale from Harter Fell

We found a sheltered spot at the foot of the true summit for lunch. Thomas was particularly pleased with the seat he found for himself. 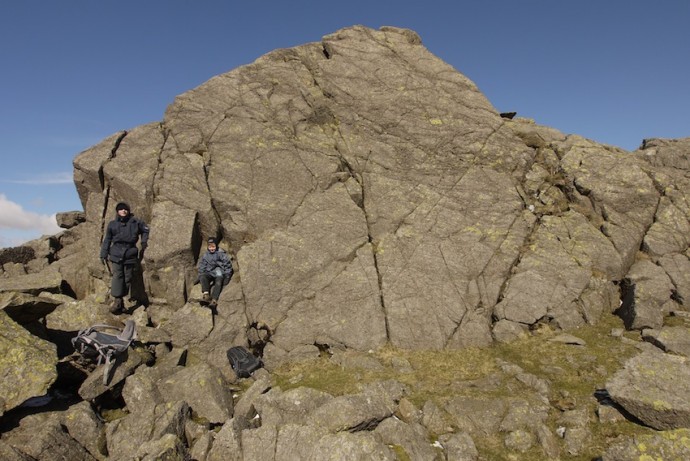 We had not really planned what to do after we got to the top, but given the fabulous views we were getting over towards Scafell, and because we had missed the views completely when we went up Hard Knott last year, we decided to head over to Hard Knott via the top of Hardknott Pass. The walk to the pass was a little confusing as the paths were not particularly clear, and the one path that we DID found that was fairly clear seemed to be taking us too far down into the valley. We tried to cut back to the path we had been on (and that the map showed us went where we wanted) but were thwarted by a fence that forced us to detour to the nearest stile. I think had we stayed on the path that seemed to be going too low we would have been better off, as it seemed to join up with us in the end near the top of the pass. 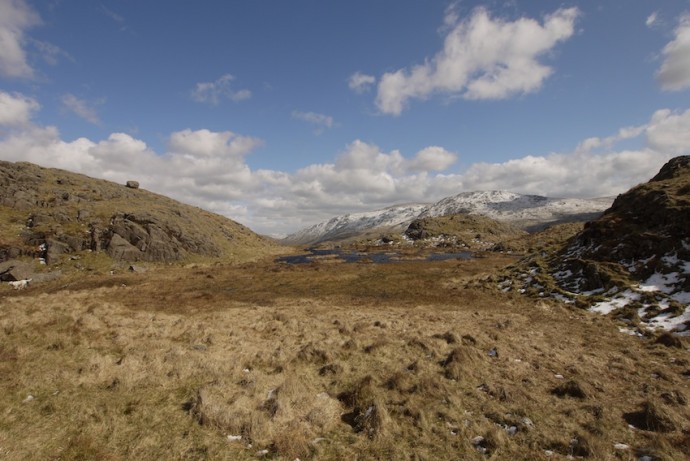 Boulder looks ready to roll down the slope...

Eventually after a few detours and backtracks we found ourselves at the road. It seems rather out of place in the middle of otherwise wild fellside. 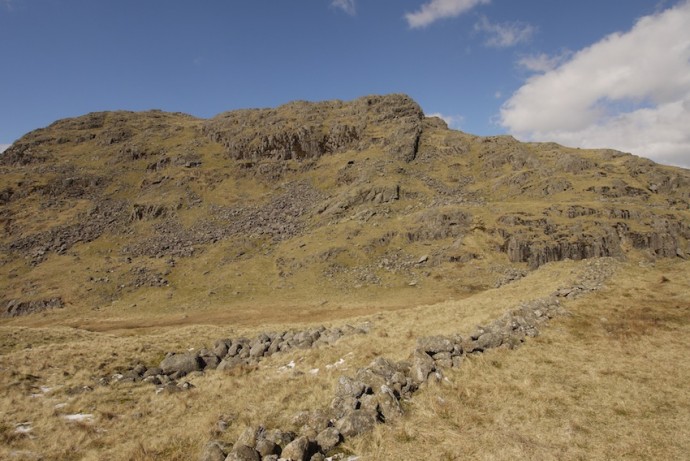 There is a road in this picture...

The walk from the top of Hardknott Pass to the top of Hard Knott was quick and easy - much easier than the last time we climbed it (in mist) where it seemed to take much longer. The view from the top was every bit as spectacular as we had hoped for. 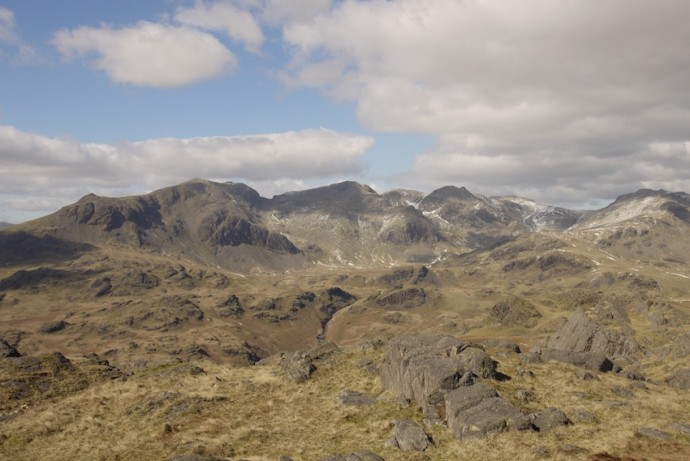 View from top of Hard Knott lives up to its reputation 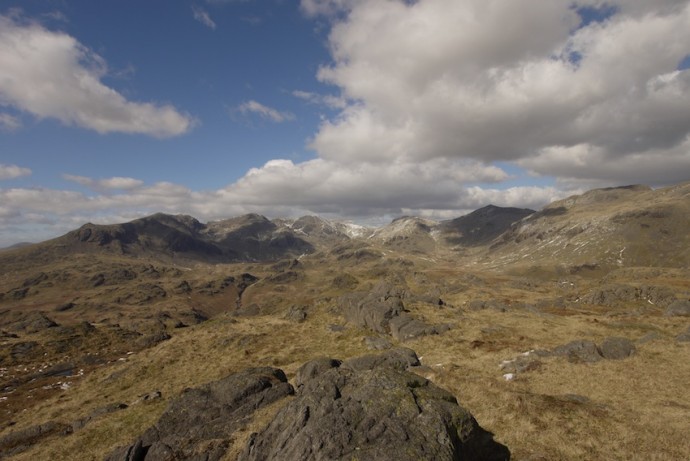 After some discussion about the best plan for descent, we decided that the best bet was to carry on down the ridge into the valley and then pick up the valley path to return to Brotherilkeld. While a long way round, this seemed like a better bet than walking back to the road and down it, and the gradients looked pretty gentle. As it tuned out, the route was fabulous - a long gentle descent on a good soft path with stunning views in front of us. 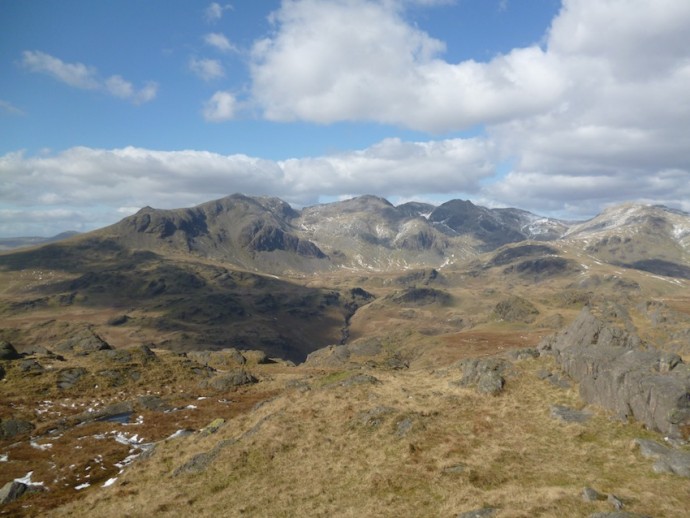 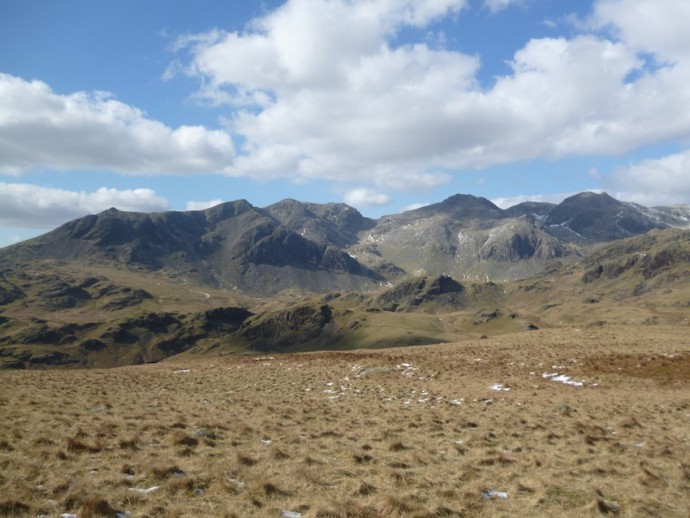 We eventually joined up with the path from Bowfell, alongside Lingcove Beck. The waterfools and pools in the beck are just beautiful - the pictures I took do it no justice - with crystal clear pools that looked perfect for swimming (in the summer...) 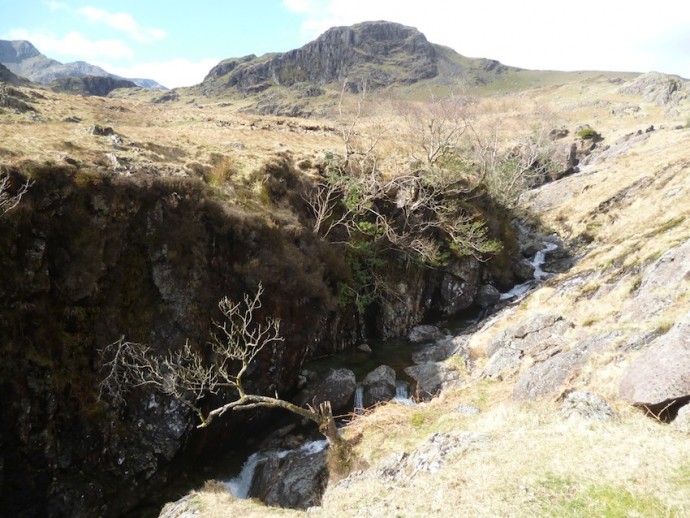 Lingcove Beck - photo does not come close to doing it justice.

Where Lingcove Beck meets the Esk coming down from Scafell, there is a very pretty and sturdy bridge carrying a single track footpath. I wonder who built it, and why... 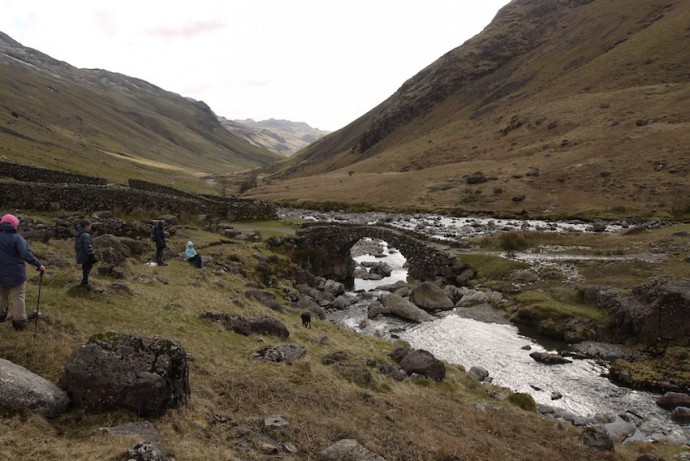 Lingcove bridge - looks far too grand for a footpath. Green Crag in the background.

From there it was a long though easy trek back to the car at Brotherilkeld. A most enjoyable day, and some of the best views I have ever enjoyed in the lakes.

Great stuff Richard and what a glorious family day in the lakes. Conditions looked almost perfect, shame about that 50 mph wind but with views like that, topped off with a dusting of snow for effect, you must have been elated. Lovely photos to record the day too

Magnificent views Richard. Great report, thanks a lot for posting.

Nice report and pics - it is always nice to see Hard Knott climbed from below and not the "park at the top of the pass" approach that I always take!

Enjoyed this one alot Richard and you managed to get some really good pictures - espcially the conrtrast between the snow...and not snow! Really gave them some atmosphere!! Looked like another great family day out (even if a bit colder this time!)

I got a suntan there last week

A really pleasant walk, good photo's you got there too