I'll be interested to hear from anyone who has done this one way and back route up Sgorr Ruadh. It is the one mentioned in the Walkhighlands walks list but most trip reports for it seem to come from Beinn Liath Mor or -one - from Annat. In particular (for my return trip) I am looking to hear if there is a path after the Bealach Mor and up the slope. Nothing on the OS map and it turned out to be easy enough walking but just wondered!

Sunday at Achnashellach and I eagerly looked forward to conquering Sgorr Ruadh and perhaps Fuar Tholl – until I took a look out of the window.....
The mist that had burned off yesterday looked a long way away from the drizzle and thick clag that now cloaked the Strathcarron area.
The night before I had sorted out some compass bearings as the OS Map didn’t show a path up the main slope of either mountain. This simple precaution had turned out to be very useful indeed.
The easy bit was getting back to the turn off at Coire Lair. A small cairn marks where the path into the Bealach Mor turns off to the left. 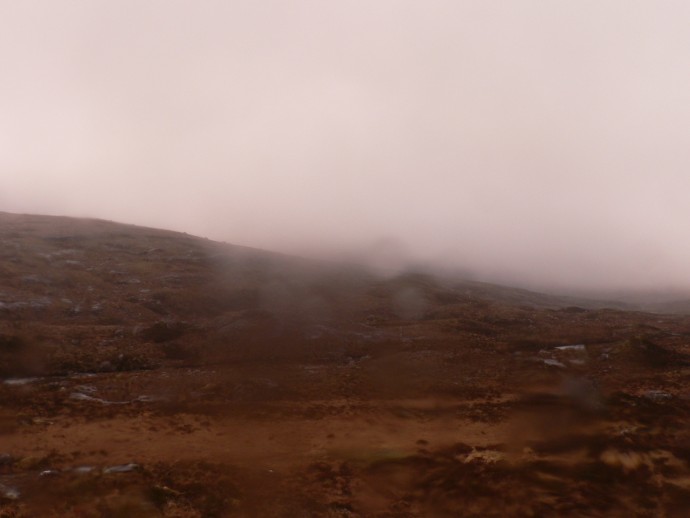 Sgorr Ruadh is in that, honest!

I met a walking group from Dundee who were on a weekend in the area, having climbed Beinn Eighe the previous day. They were going up Beinn Liath Mor. Hope they had a good day. I abandoned any thought of going up Fuar Tholl. Was thinking twice about Sgorr Ruadh but hoped there might be a break in the weather as the forecast had suggested at about 12 o’clock.
Got to the series of lochans on the flat bit of the bealach. This one is at about NG 968 494. About a hundred metres further on the pat there is a cairn to the right of the path. I couldn’t see a path leading off it. Cairn on path to Sgorr Ruadh. No discernible path - I had compass bearing from the knoll in the background though

In any case I had worked out the first of my compass bearings from the knoll about 15 metres further on. The path goes right around the side of it at NG 966 494. The route I had arranged hopped between obvious landmarks (basically some of the lochans shown on the 1:25000 OS Map).This bit was a bit boggy, not surprisingly and involves a small bit of descent. Eventually I had to set off up the slope towards the summit ridge, heading straight for what I believe would be the main cairn. Occasionally I saw the prospect of a path and particularly in the wet bit near the lochans the odd series of footprints. Having worked out some bearings I preferred to ignore them and concentrate on the route. 45 minutes after leaving the main path I hit a rather sprawling cairn. Underfoot had been for the most part nice short grass and pretty good walking.
At one point I had contemplated going slightly east from there to the lochan at 963 505 to convince myself that it was the true summit to which I had arrived. However as:-
1. I hadn’t prepared a bearing for that
2. It would have taken a bit of time in the mist, wind and drizzle to so do
3. There was no point hanging about as there was NO view, de nada, nothing.
4. I wanted to keep in the frame of mind that had got me this far and just reverse my compass bearings to descend
5. I also worried about the result of the drizzle, rain and nearby mountain streams on the River Lair which I had to cross again to get back home and,
6. It really doesn’t matter that much

I decided just to get back down again and promise myself to come back on a good day to see the slope which had been quite nice walking, the view which I am sure is terrific if you can see more than 20 metres and the majesty of the great cliffs of Coire Mainnrichean
Descending was reasonably easy. At the end I was a bit out on the bearing as I finished up about 20 metres to the left of the cairn I had ignored before. Fortunately by that point, after the penultimate bearing point I would have hit the main path pretty easily anyway. The river was no worse than it had been on the route up and all was well. River Lair at point where I had to cross

On the path down the weather naturally started to clear a bit – ain’t that always the way? I consoled myself by thinking back on how over two days , two mountains I had long wanted to climb had (I am reasonably sure) been conquered and with the Pine Martens of Achnashellach seen at close quarter and fed by hand it had been a marvellous weekend.

Re: Sgorr Ruadh - After the Lord Mayor's show

I have been up and down Sgorr Ruadh a number of times from the Bealach Mor. It is one place where I'm surprised that a path hasn't formed, as it is a fairly popular route. But having seen it in clear weather on at least a couple of occasions, I am pretty sure there is no path on the ground.

I can't work out from your description whether you reached the true summit, but you would remember seeing a substantial shelter cairn if you did.

Re: Sgorr Ruadh - After the Lord Mayor's show

Thanks Malky C.
Fairly sure it was the top though by sprawling I was thinking of the loose rock in front of the cairn. It came at the top (at least it seemed liked the top) of what felt like a sudden short steep bit of the main slope. To be honest I didn't clock a shelter although it looked reasonably big but almost immediately turned around (was probably very optimistically hoping for clear weather to have followed me up the hill!!) got out my little black book with the bearing back down to Lochan Bealach Mor and set off within 2 minutes.
As I mentioned I am determined to go back - even more so after seeing Joe Norris's excellent photos of report of the walk from 2 days after