A'Chralaig - a price worth paying

A'Chralaig - a price worth paying


For some things there’s a price to be paid; endure the pain to enjoy the gain; you’ve got to pay upfront. A’Chralaig epitomises every aspect of such a sentiment.

A guidebook simply sums up the first stage as “climb steeply up grassy slopes for 500m.” Sounds simple doesn’t it. But as you sit in the car trying to trace a line or identify a path wending its way up that very same grassy slope it ain’t very pleasing to the eye. There are no sweeping zig-zags or gentle gradients to carry you easily uphill. Instead, less than a hundred metres or so from the road, a series of bucket steps, one on top of the other, are stacked in an unrelenting, unremitting almost never-ending pile for the requisite height. Forget rhythm and forget pace. These bucket steps jumble short and long, wet and dry, grass and rock, firm and soggy.

So, get your mind into another place, try doing the alphabet backwards, recall the words to Bohemian Rhapsody or work out why you spent £400 on a season ticket for Doncaster Rovers this year. Some will prove easier than others, but they’ll all be easier than the hour or so it’ll take you to get the steep stuff above you.

But the angle does relent and with a sigh of relief (if there’s any breath left) you can welcome the end of the torture.

Ahead, the whaleback of A’Chralaig rises in gentle steps; relief after the drudgery of below, but in itself it still belies and masks the pleasure to come.

But in these curious times I shouldn’t have been surprised to lose visibility just a couple of hundred feet from the top. The early rainbows from showers heading up from the coast were now replaced by full on snow that obliterated any view that could have been enjoyed.

However this hill, and it’s neighbour Mullach Fraoch choire,are nothing if not tantalising, taunting and teasing. The path heads down into more mist until gradually, as the slope begins to level out, the snow eases and the view along the route ahead emerges.

The outline of a swooping rollercoaster becomes crisper, culminating in a serrated crest that leads to the apparently precarious top of Mullach Fraoch choire. 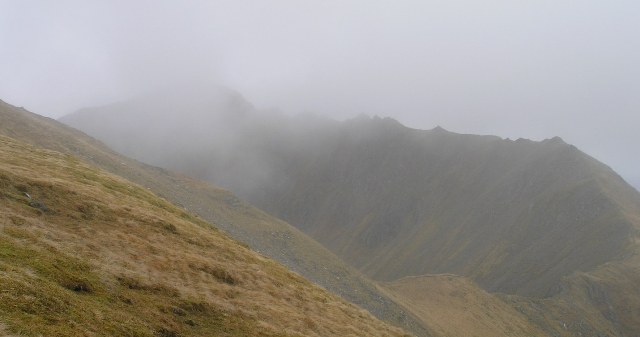 For those of a nervous disposition, be assured: its bark is worse than its bite. What appears as a teetering edge after Stob Coire na Cralaig is nowhere near as vertiginous as feared, and the challenging coxcomb of the final ridge is met with a weaving in, out and around the pinnacles rather than a vertigo-inducing up and teetering over. The summit cairn and shelter comes far too quickly; it’s a good job they’ve got to be repeated in reverse to get back to the point where a descent into Coire Odhar can begin.

The shelter provides plenty of scope for escaping the wind and establishing a sun-trap corner in bizarrely surreal surroundings. It’s rare I spend so long on the top as I did here, savouring the views, the position and the boundless opportunities for more visits in the future. I still can’t fathom why, for so many years back in the 70s and 80s I just belted up the A87 on the way to Skye with absolutely no thought of stopping: what riches were missed. After dropping into Coire Odhar, be advised to keep the deep-cut water channels to your right if the paths or tracks have become too indistinct. Whatever the preceding weather I suspect this area will forever be damp. As the water struggles to decide which water course it’s going to follow it hangs around. While waiting to decide between Fionngleann or Caorann Mor it congregates, gathers and puddles on land with a gradient that can barely make it flow: the perfect bog.

Once out of this and heading back to Cluanie, the pace can pick up and enjoyment return. And when the steep profile of that initial slope begins to dominate your left-hand horizon you can breathe a sigh of relief. “Thank God I don’t have to do that again” is the first thought that springs to mind. Then the recent memory of those final ridges and the views down into Affric and that determination is already beginning to melt away. Some things are a price worth paying.

I saw you standing looking at as I drove past you - you looked like you were 'contemplating'.
nice one!

old danensian wrote:So, get your mind into another place, try doing the alphabet backwards, recall the words to Bohemian Rhapsody or work out why you spent £400 on a season ticket for Doncaster Rovers this year. Some will prove easier than others, but they’ll all be easier than the hour or so it’ll take you to get the steep stuff above you.

Could have been worse - could have been a season ticket for Dunfermline Athletic. Zero home wins so far this season. Reason we are going down! Fortunately I gave that expenditure up some years back!

Stunning report OD. Will the glut of excellent Kintail reports ever end?????

Aye great report OD !
Still got these two to climb myself, and been eyeing them up more and more.........from the Cluanie trio yesterday and on the map over the weekend whilst listening to Iain Watson's account from the friday.
Great meeting you,
cheers the noo,

I slogged up there in snow last feb & because i did not make MFC i had to descend the same way. Awfull

Another extremely well written report OD. Just loved reading that. It was a real bog on the descent when I done these.