Entry to the hills by way of a Groupon voucher.

Entry to the hills by way of a Groupon voucher.


Date. Saturday. Friday 30th March, Saturday 31st March and Sunday 1st April 2012.
Completed by. Dave, Julie, Wilson and Jake
Weather. Good
Time. 6.5hrs, 6.5hrs and 7.5hrs
Distance. 19.5km, 12.5km and 20.9km
Ascent. 1240m, 1110m and 1106m
Hills.
Munro’s x 1
Corbett’s x 4
Grahams x 0
Day 1. Benvane and Ben Ledi
Day 2. Beinn Luibhean and The Cobbler (Ben Arthur)
Day 3. Beinn Bhuidhe
Had an overnight stay at the Rowardennan Hotel at Loch Lomond on Friday 30th March. So a decision was made to combine our night of luxury with a couple of days wild camping.
On the way down we climbed Ben Ledi and Benvane from The Brig of Turk. A couple of fine Corbetts on any day were made much nicer with the beautiful weather.

We then had a good evening at the Rowardennan Hotel, fabulous food washed down with some drinks finished off an enjoyable day.
Great Hotel for us as it’s Dog friendly. (Thumbs up for the Groupon voucher) Next day and the weather was still holding out. Ben Luibhean and The Cobbler (Ben Arthur) were the objectives for the day.
And because it was about 10.30am we started on Beinn Luibhean by the time we reached the Cobbler we had missed most of the traffic. We ascended from Bealach a Mhaim and descended via the NW ridge to the A83 for the long slog back to the car.

On the ascent of the Corbett Beinn Luibhean I spotted a potential camping spot around the old hump back bridge near Butterbridge. That was our home for the following 2 evenings. Me on the Cobblers summit. 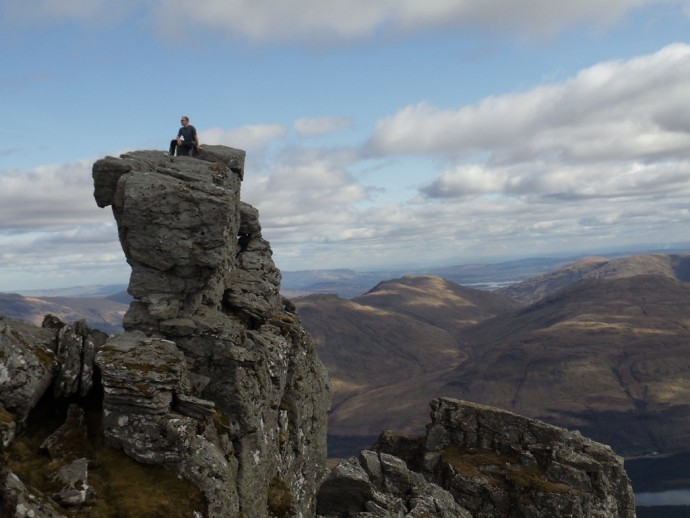 Our final day would be our only Munro of the trip Beinn Bhuidhe and if we got back to camp early enough we would climb the Corbett Binnein an Fhidhleir.
I probably underestimated this walk in more ways than one. I assumed it would be uninspiring and also thought we could complete the walk in about 6 hrs……… I was wrong on both accounts. By the time we reached camp the cloud base was down to around 350m with some rain thrown into the mix. Decided on getting some calories into our bodies instead of doing that final Corbett. Was tucked up by 8.30pm again but never slept well at all. Very tired in the morning, but that was soon rectified with a very cold bath in the River Kinglas. Grrrrr…

Wilson and Jake are back!!!!! Long time no see (or so it feels anyway!). Corking stuff there as always Dave. I noticed the hills included at the start of the TR and thought to myself "Oh aye, here we go, this is going to be good!".

Nice report Dave. Great to see you and Julie with Wilson and Jake out wild camping with some big routes again. Nice poses on the Cobbler. Superb