It was a pleasure to meet Bod and Valerie in the bar of the Kintail Lodge Hotel the previous evening. It obviously happens to them a lot, but they were recognised by me because of their dog, Ritchie! Sorry guys! We had discussed respective plans for the following day. In my continuing pursuit of Munro Tops, I had a few to choose from in the area, including one way to the north of Sail Chaorainn.

This was also a group of hills that Bod and Valerie had their eyes on. The forecast was set fair according to MWIS. The morning was overcast but the clouds were above the summits. Essentially this route is the WH route with two extra Munro Tops added. So I will not describe the route in any detail.

I set off before Bod and Valerie (and Ritchie) in the hope (vain as it turned out) that I might be able to do the Tops to the north in time to meet or catch up with them on the return. I left my car at 10.15am and followed the old military road. I was intrigued to know why these reflectors were needed in this location (useful when returning from the hills in the dark I suppose). There were early views of the east end of the South Kintail ridge. The track was lost under the snow on the more level section before the steeper rise on to the Carn Ghluasaid plateau. So I followed footprints which swing to the east a bit and up a bit of a ridge line picking the path up again around the 700m mark. Here the plateau was windswept and so there was no major accumulation of snow. There were views to the linking ridge to Sgurr nan Conbhairean. Soon the top was reached. The WH route description suggests that this is a cairn on the cliff edge. An old SMC guide I have suggests it is at a cairn 50m back. It is all fairly flat up there. I went to both. Just over two hours to the top. On to Creag a’Chaorainn and some deeper patches of snow but these were on downhill sections. And A’Chralaig is in view. A shallow dip is followed by the final 150m climb to the crowning peak of the day, Sgurr nan Conbhairean. Carn Ghluasaid looks small. That leg has taken an hour and 20 minutes. After 10 minutes on the summit I descend this way. 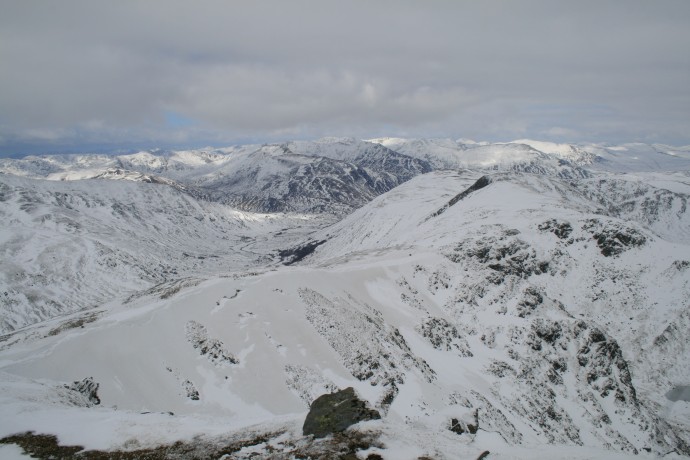 Down to the col in 15 minutes and a view back up to Sgurr nan Conbhairean.

I arrive at Sail Chaorainn around 2.40pm. I wonder about the wisdom of continuing further north. I had not checked the time of sunset. If the snow conditions were to continue as they had been I was uncertain as to whether I had the strength to do a 4 kilometre round trip followed by the necessary ascent or partial ascent of Sgurr nan Conbhairean.

I dally for 20 minutes drinking and eating and taking in the views too. And then Bod, Valerie and Ritchie arrive. We have a natter. Further photos are taken and I convince myself that, having come so far, I must continue.

There is a deep notch between Sail Chaorainn and Carn na Coire Mheadhoin but the way is clear and the deep snow is more patchy. In 10 minutes I am on the next summit. It has a well built cairn. The final summit, Tigh Mor na Seilge, is a 100m drop and a 30m climb away – to be reversed on the way back. The ridge line of Tigh Mor na Seilge is covered in the deep stuff. It takes 45 minutes to get to the top. It is 4.10pm when I start the long journey back. The round trip from Sail Chaorainn has taken the best part of two hours. At 5.30pm I am starting the haul up Sgurr nan Conbhairean. I look back at the trenches created by the passage of feet across the gentle slopes of Sail Chaorainn. On the way back across those slopes, like others, I had swung around to the east where there was less snow. This had sped up the return considerably. The true summit of Sgurr nan Conbhairean is traversed to the west and I join the line of footprints descending towards the golden sunset. Footprints into the sunset

Behind me Sgurr nan Conbhairean is lit up with a backdrop of blue. The wind has long since subsided. It is 6.15pm when I reach the top of Drochaid an Tuill Easach. I pause. Ben Nevis is now clear miles to the south. I take final glances to the east and to the west before turning south towards Loch Cluanie. There is a smattering of a path high up. A prominent cairn at the edge of the steepening promises a decent path down. But the trail is a peaty bogfest – how disappointing. I am down to the road at 7.45pm. I decide to follow the road rather than the military road because of a chance of a lift and the fact that there is firmness under foot. No luck with the lift, but Lundie is only two kilometres away and I am back at the car by 8.15pm.

Another cracker CL with stunning pics throughout, more of the deep snow wandering I see..........you must be starting to like it

Great report Clach Liath, it was good to meet you and spend some time on the hill together, followed by a nice meal at night in the hotel. I will probably post on this day as well sometime soon. All the best, happy tramping

ChrisW wrote:Another cracker CL with stunning pics throughout, more of the deep snow wandering I see..........you must be starting to like it

Chris, I never did get those snow shoes from you!

Never mind, this is the joy of winter mountaineering in Scotland.

The tarmac was a relief at the end of the day.