The exceptional march weather provoked thoughts of heading to the far north-west to enjoy a couple of solo nights in the mountains with a wee dram and no midges! It didn’t take long to settle on Fisherfield with a view to tackle the 6 at ‘the dawdle’ rather than a mountain marathon event.
The next day saw a lazy start followed by a leisurely drive to Dundonnel and then I proceeded to strew the contents of the boot along the roadside. What to pack and what to leave, weight Vs comfort? Ended up packing for comfort and set off an hour later with 12kg on the back.
Decided to do the route anti-clockwise so first point on route was the Shenavall Bothy and 2 ½ hrs later I was greeted at the bothy with “water’s boiling, want a brew?”, what a gentleman. After a brew and a natter and it was time to do a bit more dawdling in the direction of my planned overnight spot on the northern flanks of Ruadh Stac Mòr.
The first obstacle from the bothy is the fording of Abhaimm Srath na Sealga and I spent a little time looking for the ‘best’ spot to cross the river, wide and slow, it was obvious that there was no way of getting across without getting the feet wet. Out comes the secret weapon, a pair of light weight crocs (part of the comfort packing), 5 minutes wading in very cold knee deep water and I was across and looking to a non-boggy bit to change back to boots. Finally gave up on the fruitless search for ‘dry land’ and continued to walk across the 1 km of bog to the crossing at Larachantivore in the crocs, sometimes going up past the ankles and I’m told it’s deeper in places! Larachantivore crossing was straight forward but still cold.

Larachantivore with An Teallach in the background 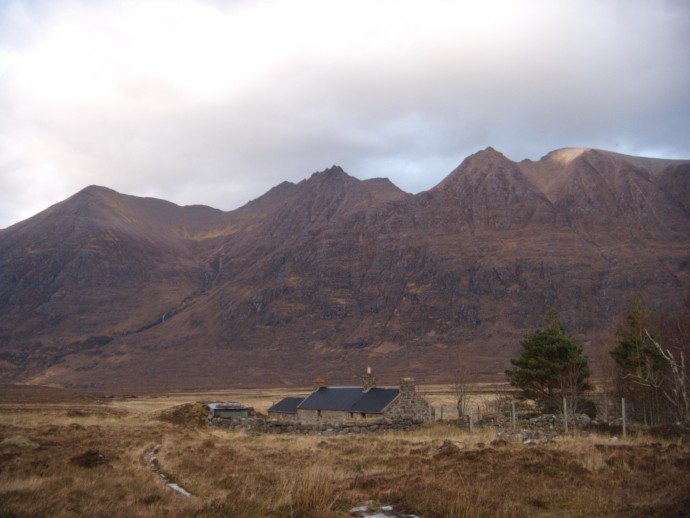 Five hours after leaving the road I’d set up camp alongside the Gleann na Muice Beag (NH 020 776) and soon I was enjoying the evening meal; soup, pasta, coffee, choc’s, wee dram, star watching and a wee dram before bed. 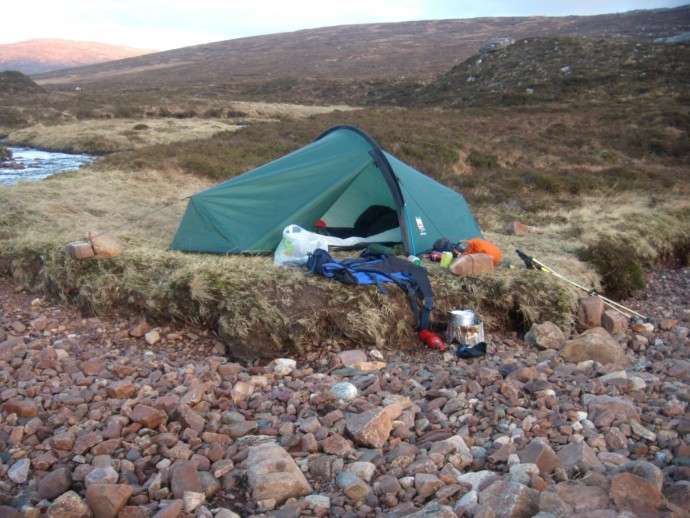 0700 hrs, struck up the stove.... disaster! ..... the faithful ‘Whisperlite’ was nearly empty, I managed to get the usual breakfast of porridge + a cup of coffee before the fumes ran out. Grumpily I stripped camp lusting after the second cup of coffee (fuel leakage was later found to be caused by a damaged ‘O’ ring in the bottle/ hose connection and not depressurising the bottle overnight allowed a slow leak).
I ascended Ruadh Stac Mòr mulling over my options; cold dinner tonight (cereal bars) or a dash around the peaks and back to the car that day; decided not to make a decision, just ‘see how it goes and take it from there’. The summit, great views, camera battery’s flat (I’m sure I charged it), it’s turning out to be one of them outing!
The descent towards A' Mhaighdean looked, and felt, very intimidating from the top with little signs of a track through the boulder field down to the steep crags below but a navigable route was quickly located, would be hard to locate in poor weather if unfamiliar with the route. From the col below I could see that I had descended too far to the left (south) and an easier line was clearly visible, the route looks even more intimidating/ improbable from a distance.
The slog up to the ridge of A' Mhaighdean was rewarded by magnificent views in all directions, getting better as the summit was attained, camera would have been nice!
An easy 2 km of very squelchy downhill followed, the steep 300m climb up to the NW ridge of Beinn Tarsainn getting bigger with ever step, a reminder that there was a lot of up’s and down to go.
The ridge of Beinn Tarsainn is probably the highlights of the trip, the rocky crenulations adorning the summit ridge (easy scrambling) add a lot of interest to the route and shouldn’t be avoided even with a 12kg sack. The summit of Beinn Tarsainn proved a great place for a quick stop for a bite to eat and to muse over the route I’d come on and the route to ahead, still undecided on a plan!
The overwhelming memories of Mullach Coire MhicFhearchair and Sgùrr Bàn are boulders and more boulders, seemed like never ending piles of boulders, uphill boulders, downhill boulders, slow going with a big sack.
Finally got to where I’d planned to camp the night at around 3pm, col at spot highlight 650m (NH 064 757). Still early in the day; guestimated ~5 hours back to the car and hot food; the local ground conditions, very soggy grass/ sphagnum moss or rock made the decision to move on an easy one.
Dropped the pack around 500m short of Beinn a' Chlaidheimh, some good dry ground for camping here about but no water. Unloaded I floated up the slope to the summit and returned 15mins later having spied out the descent route and resolved to get a hot meal and a beer that night.
The descent to the east to the Abhainn Loch an Nid proved very wet underfoot and more than once I ended up flat on the back as both feet skidded out from under me. Found a good crossing at an island around NH 088 722 but I still had to put the croc’s on, I guess in better weather you could get across with dry feet.
Finally got back to the car at around 8:30pm and stoked up the stove for soup and pasta while I changed, packed the car, ate and then it was time for a well earned beer. Took me around 18 hours walking to do the route, dropping the sleeping and cooking gear (8kg) would improve the speed but on reflection I would still go with my original plan – a 2 night dawdle and enjoy the wilds.

Top tip - disconnect your stove from fuel source (gas or liquid) after use!

what a shame about the camera and the gas, but enjoyed the report.

That was quite some adventure in a truly amazing part of the country. It really is a wilderness. I enjoyed your report.

As yourself we will camp also.

Thanks for the report, I enjoyed the idea of dwadling and also of not making a decision before it felt right, it's a shame that the camera didn't work.