A couple of Easter Ross Marilyns

A couple of Easter Ross Marilyns

The weather forecast was looking rather disappointing for my week off, but I was lucky to be able to grab a quick unplanned opportunity to get out on Saturday morning. I dropped my wife off in town then charged over to Go Outdoors to grab a lightweight tent in their tent sale. Hopefully I'm now ready for some interesting overnight trips, although I don't think it will appear in reports for a little while yet...

I had just grabbed a pile of maps without deciding where to go, and I now knew I needed to be back for 1pm, not giving me many options. I headed for Easter Ross again, with a couple of lower hills in mind, the cloud level looking uninspiring. I was parked up at the new looking forestry car park at Strathrory by 10:15, and started walking along the forestry track. A signpost suggested a through route to Kildary, which looked worthy of investigation in the near future. Instead, I forked left onto a less used track, and passed Loch Sheilah.

Cnoc an t-Sabhail.gpx Open full screen  NB: Walkhighlands is not responsible for the accuracy of gpx files in users posts
Strathrory: 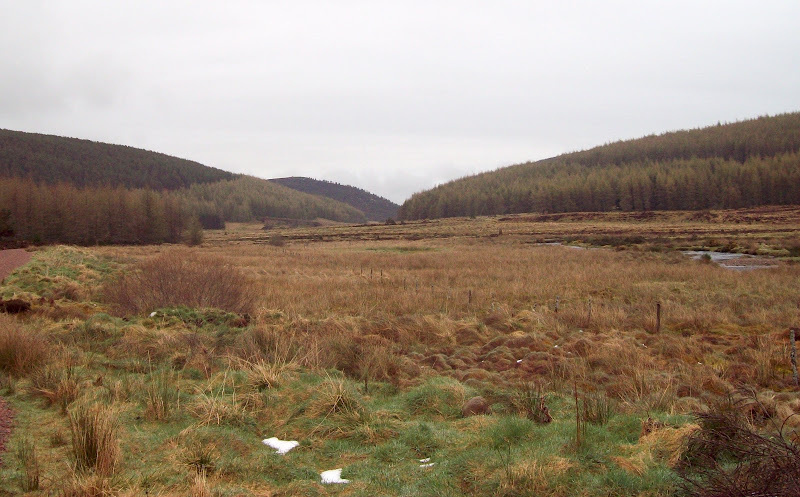 Western flank of Cnoc an t-Sabhail: 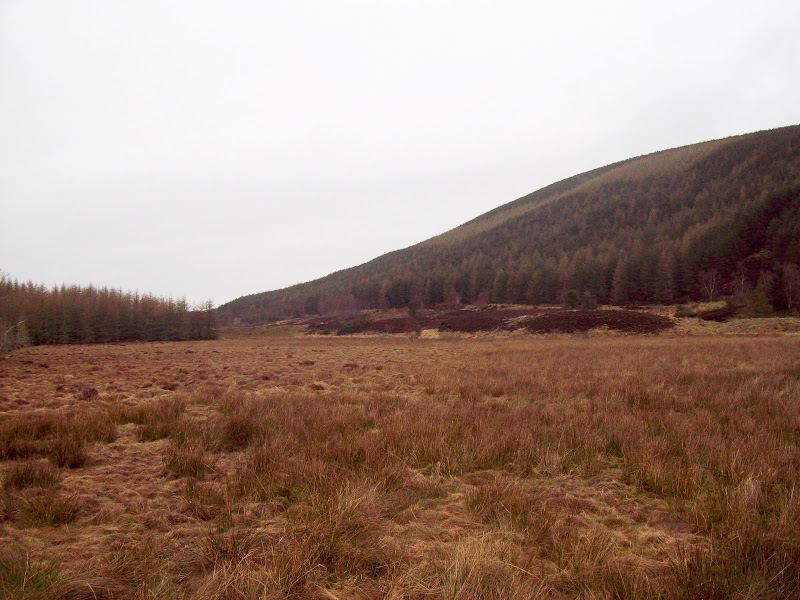 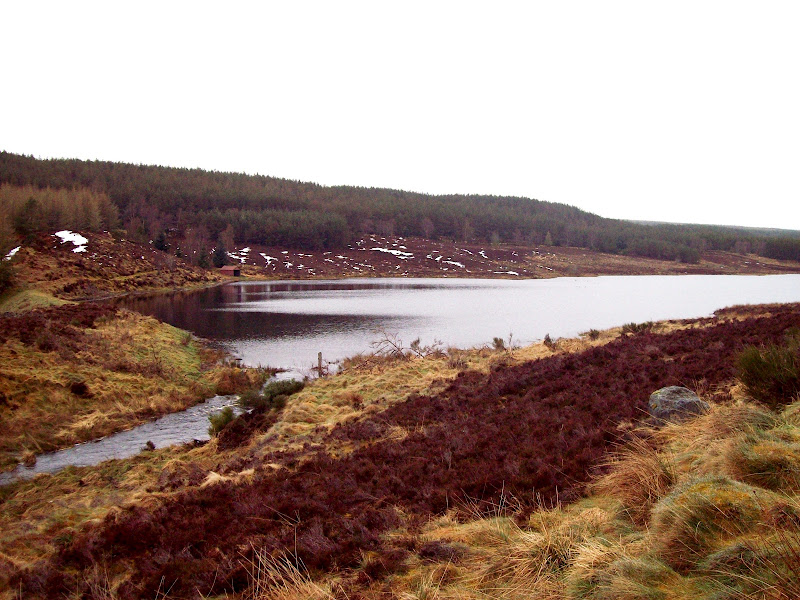 There was a light drizzle on, so I didn't hang around, and pushed on to the end of the track. This brought me out on the edge of the forest. There was a gap between the trees and the fence which allowed for an easy route up - a bit wet but much less heathery than outside the fence.

Looking down the edge of the forest to Cnoc Muigh-blaraidh (an outlier of Beinn Tharsuinn) and the Struie: 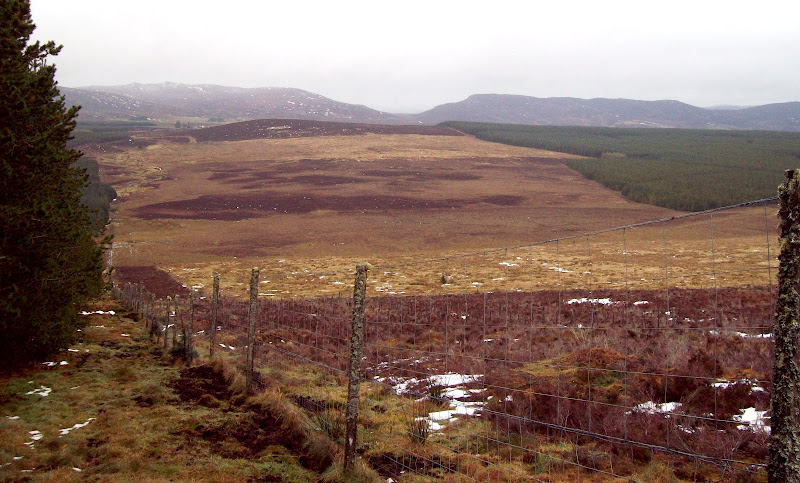 This was very similar to the adjacent Cnoc a Choire Guinie, which I had climbed just before Christmas - not an overly inspiring hill. At least there had been some sunshine on that one! On the summit plateau, I tramped across some of the remaining snow to what appeared to be the highest point. The spot height on my map was inside the forest, however, and I soon found a broad firebreak which led me to a higher point, with even less views. I tramped around a bit to see if I'd missed a higher point, as the firebreaks weren't on my map, then retraced my steps to the edge of the woods. A short distance further back, another firebreak led me boggily to the forestry track marked on my map.

Edge of the forest near the summit: 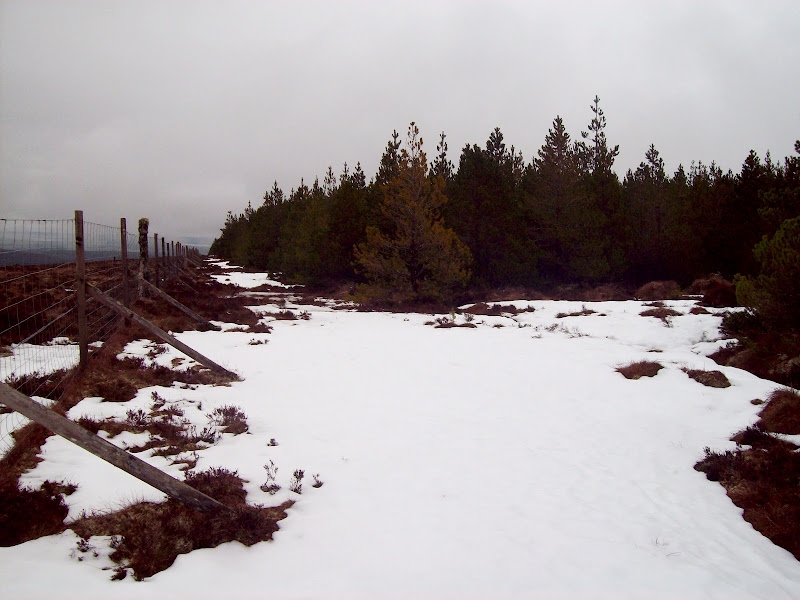 This track had slightly improved views, and to take a short cut, I went down yet another firebreak which led me back to my outward route in Strathrory. The view of Strathrory on this descent was actually very pleasant.

Looking down onto Strathrory on the descent: 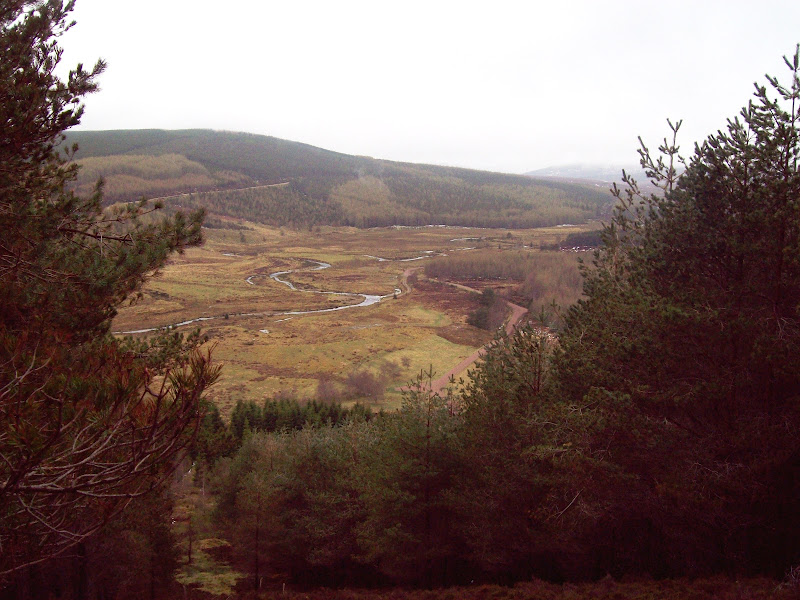 Back at the car, it was now midday, and I knew I'd be pushing it to get up the Struie and back to Inverness by 1pm. I decided to give it a go anyway.

The Struie is a much more interesting looking hill than Cnoc an t-Sabhail - steep, rocky and perched right over the Dornoch Firth (which is my favourite of the local firths). A 5 minute drive took me to an enlarged layby just before the high point of the road, and a path started a short distance further on the other side.

Struie.gpx Open full screen  NB: Walkhighlands is not responsible for the accuracy of gpx files in users posts
The path was obvious, leading up through tall heather and past a stand of trees. The final ascent up the end of
Creag na Cadhaig was quite steep but over in no time at all. 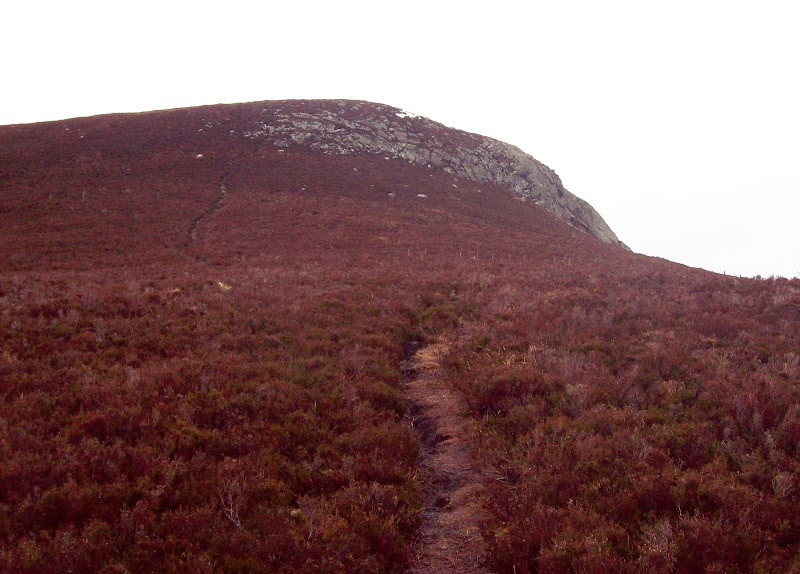 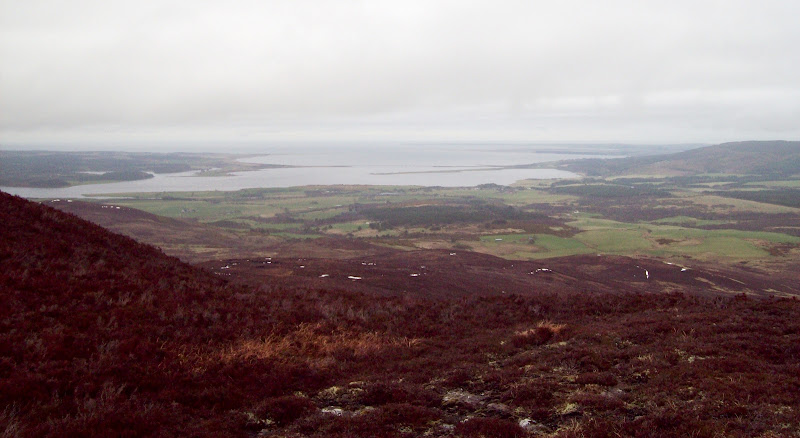 On top, a pleasant level ridge led to the cairn and beyond. It looked like there would be a good longer route traversing the whole ridge to the radio mast, and starting somewhere a little lower. Even with the miserable weather, the views up and down the Dornoch Firth were worthwhile - even better than those from the viewpoint on the road a little lower down.

East along the summit ridge: 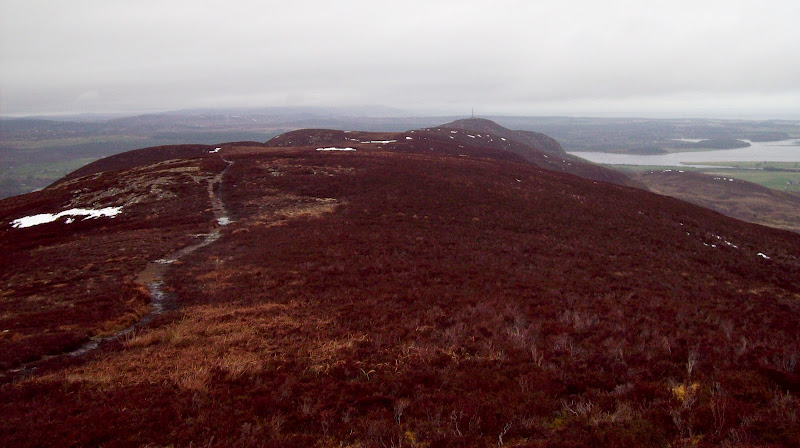 West along the inner Dornoch Firth: 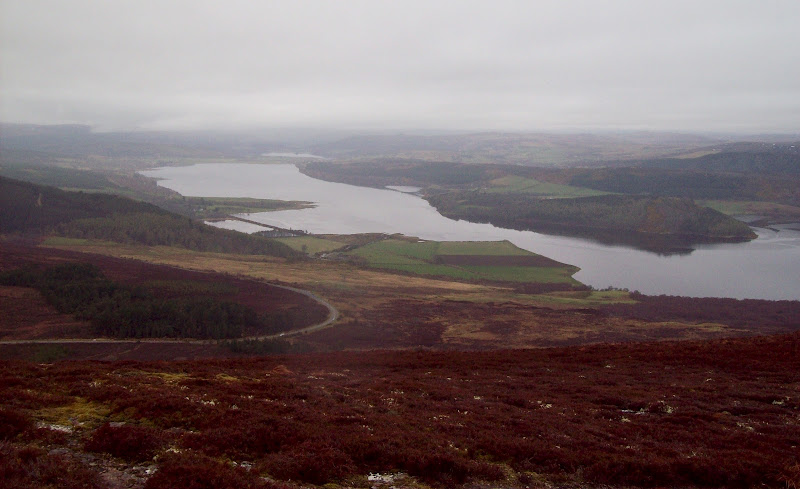 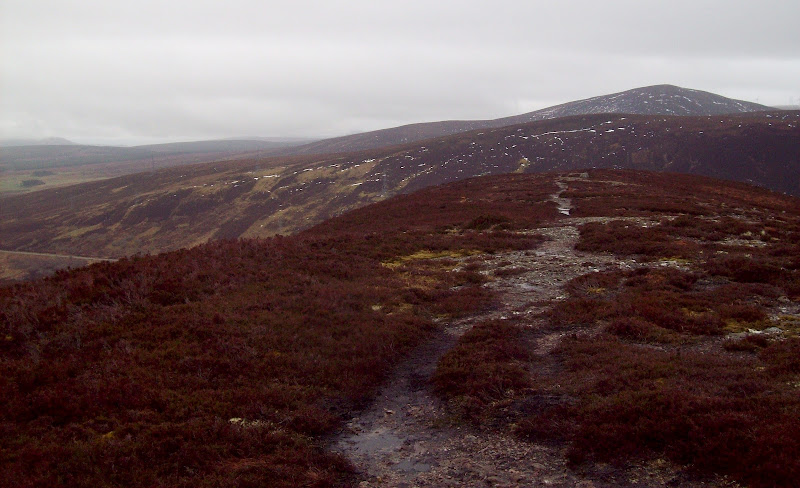 Back down to the car: 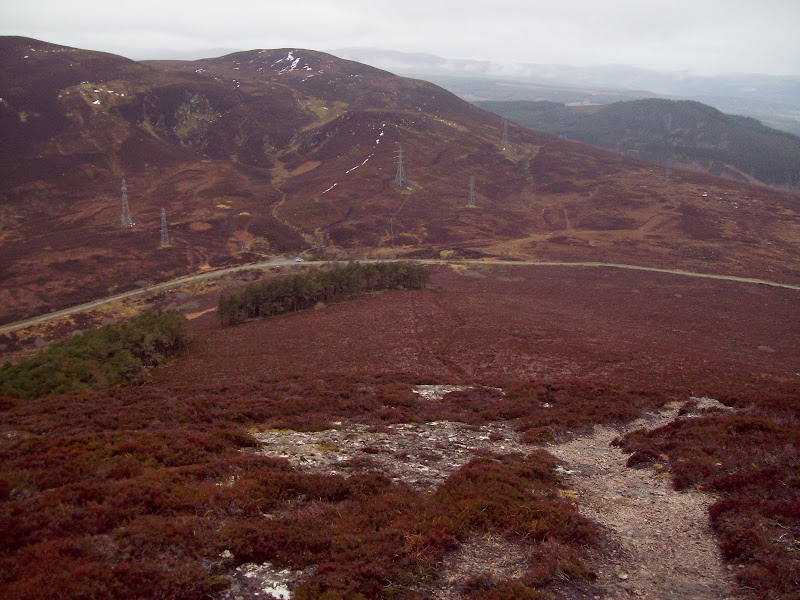 I was back down in little more than 5 minutes - a sort of slithery run. I had just under half an hour to get home, which I just about managed, although I was a few minutes late. Not a bad use of a morning, although not particuarly exciting compared to some of the routes I had conjured up for my holiday. Whether I get any of them done remains to be seen...