A fabulous ascent of Ben Nevis

A fabulous ascent of Ben Nevis


This report was written nearly 3 years after we did the walk.... thought it was worth posting anyway.
6th June 2009 was three years exactly since our first date, and we planned to climb Ben Nevis to celebrate. We were camping at the excellent campsite at Glen Nevis.
I have climbed Ben Nevis before (it was my first Munro) but for Graham it was the first time, and he had been through serious internal surgery for Crohns disease quite recently, and was a lot less fit than me... I was a little worried but he insisted he was ok to do it. The day dawned fair and dry, so off we went, with all the gear and plenty of food. 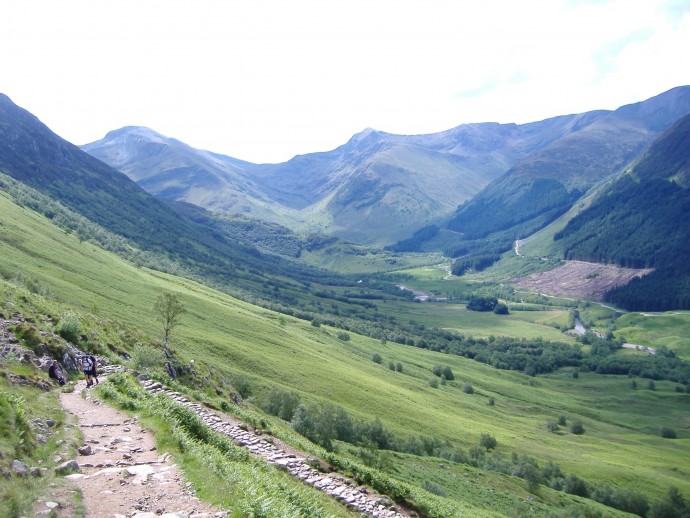 The path is very easy to follow, steep for all of it but impossible to get lost in fine weather. As usual we were horrified to see people in flip flops and jeans, with no sensible clothing or supplies. We even saw a couple with a tiny baby, changing its nappy by the path....
The first half of the walk always feels easier than the second half, and we reached the loch midway with no trouble. 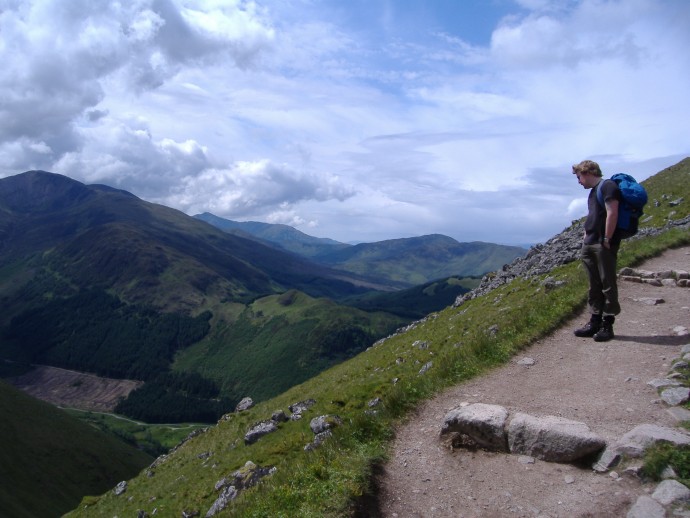 Graham takes a break.... the views are amazing 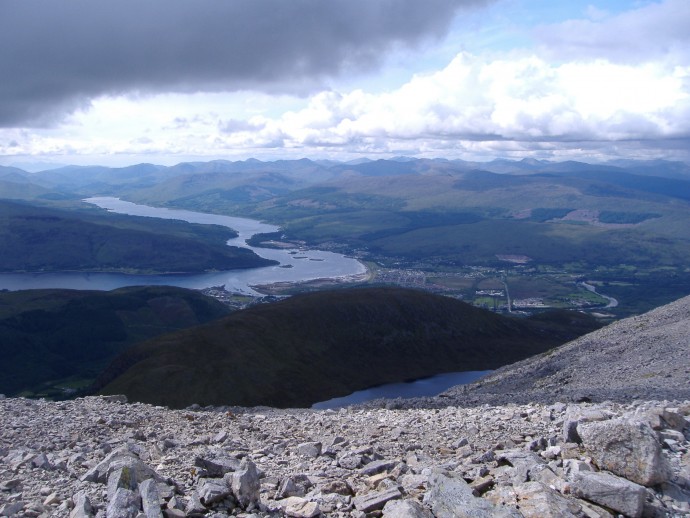 During the second half of the ascent the snow started to appear, and we were up to our knees in it at times! Great fun and refreshingly cool! Graham was doing very well and I was feeling fine, and we were thrilled at the clear views all around. 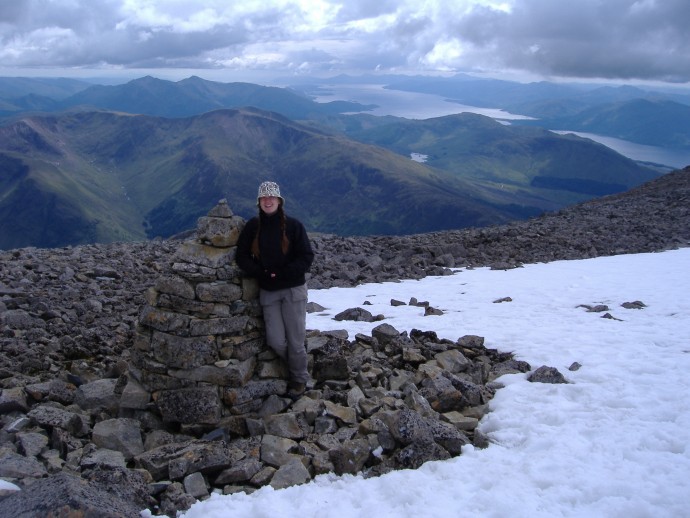 The zigzag paths near the top seem to go on forever..... this is the most tiresome part of it but we were energised by the thought of the summit and plodded on! It never seems to appear..... on and on..... 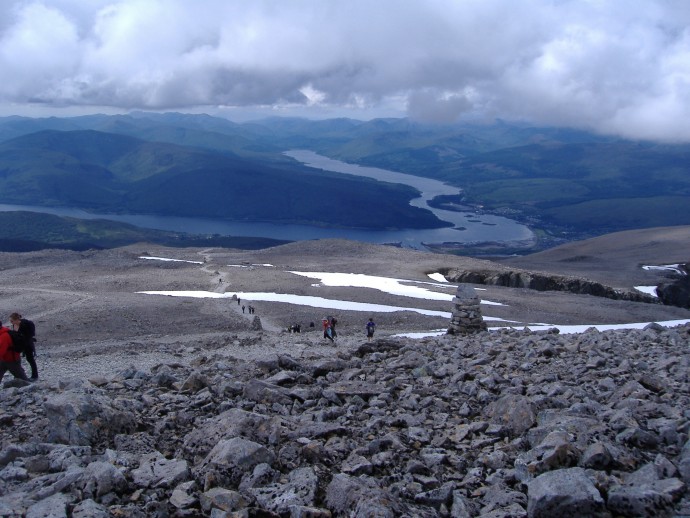 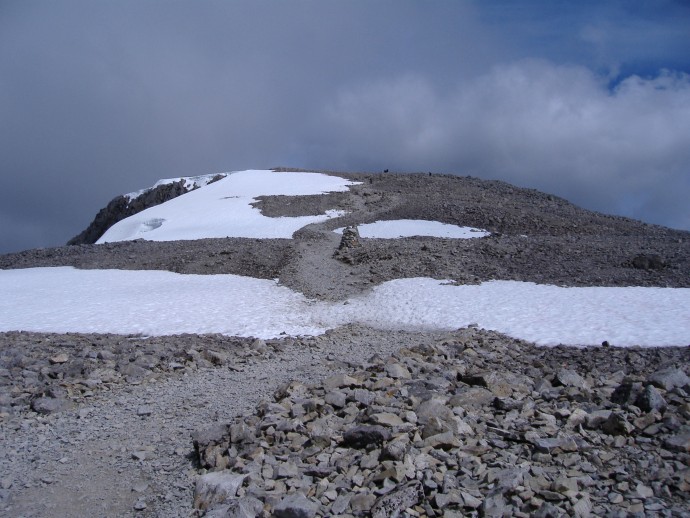 We stopped for lunch and a half hour break at the top, before beginning the descent, which is always so much more painful.. our poor legs 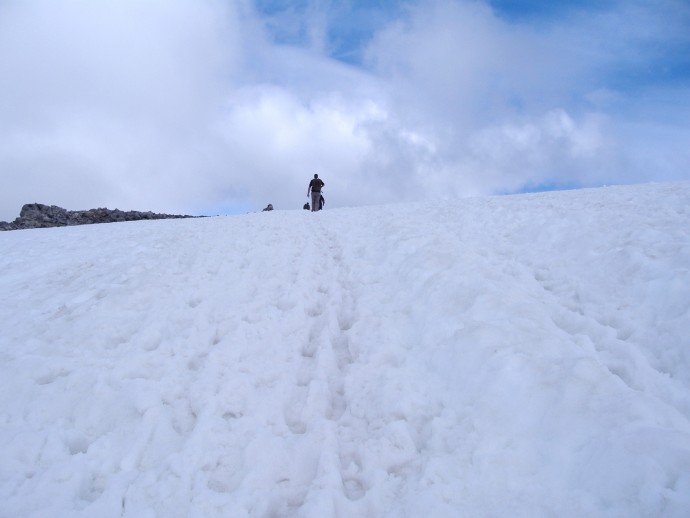 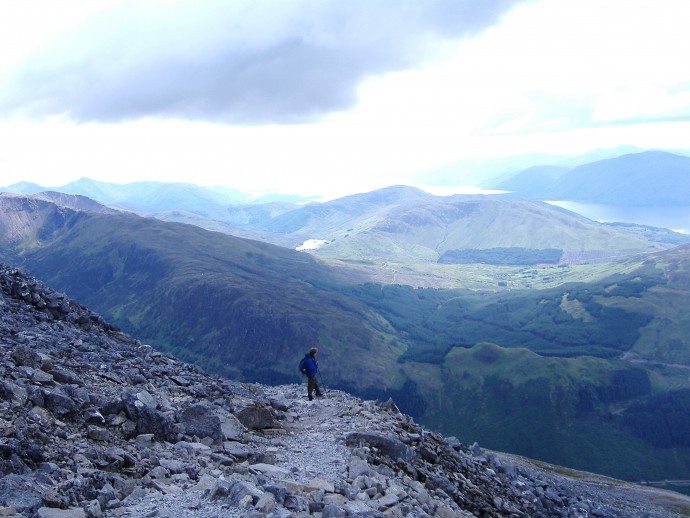 By the last half a mile we were both in agony; our calf muscles were protesting an our knees were shaky. No option though... down we went! After nine hours we finally made it back to the bottom and had a well earned meal before heading back to the tent. I have been so lucky; both my walks up this mountain have been in perfect clear conditions and this one was the best. 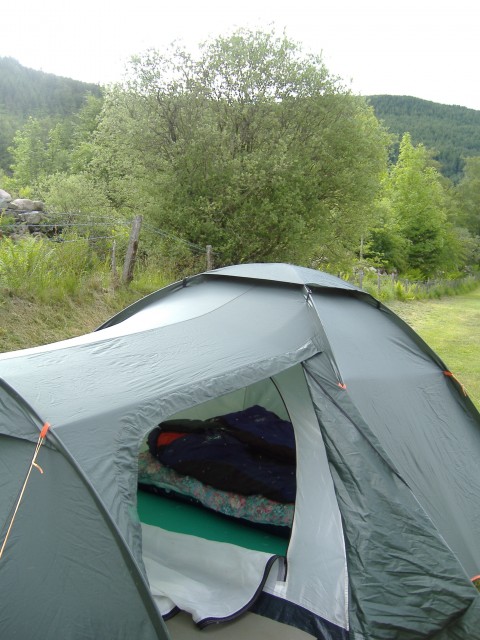 WOW! I've been far too much in awe of Ben Nevis to want to attempt it before now, but this report and these pics have inspired me! It is now on the 2012 to-do list. Thanks for the inspiration!

Thanks! I was scared of it too, before my first go, but really it's just a long steep walk. Best done out of the main tourist season I reckon! Or 5am when it's light but nobody is around... I hope you get to do it anyway.... and post your report!
Suilven is my 2012 obsession, and the Cobbler, which my Dad climbed 50 years ago.