I'd always hoped to hit 50 on the WH Kintail weekend, though i didn't expect it to be at the end of a week where i'd already bagged 6 Munros and 2 Grahams. That's more akin to a month's total for me never mind a week.

I'd first seen Beinn Fhada's great bulk in the sunshine at the WH Kintail meet last year, and with no intentions of going near any of Kintails lovely ridges it was a perfect choice. I could bag it at a leisurely pace for number 49 and if i still had enough in the tank after a long week a pop up A' Ghlas-bheinn for the big 5-0.

Amazingly i'd managed to restrain myself on the Friday night in the bar of Kintail Lodge, a mere 4 pints and a couple of drams back at the digs.so i started the day with a fresh head. For once it didn't require a drive to get to the start of a walk!

31.3.2012 Beinn Fhada and A' Ghlas Bhein 2.gpx Open full screen  NB: Walkhighlands is not responsible for the accuracy of gpx files in users posts
As you may already have seen in Monty's report from his day (quicker than mine and with a steeper descent and more foliage), there were merry bunch of us. We set off at a good steady pace along the road, across the fields and then through the glen. 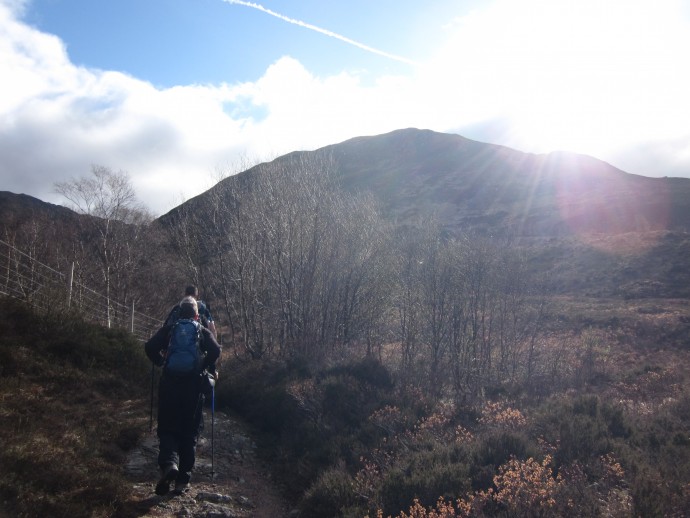 Some switching about in the line, but i still managed to maintain a good speed. A quick refuel before we forded the Allt a' Choire and started up the steeper sections up towards the stalkers path off up towards Fhada's summit plateau. This was where i started to toil. My busy week catching up with me i think. I plodded on the best i could. It seemed to be taking FOREVER! I can't put into words my utter dismay when i cheded my GPS and say we were only 1600ft up, barely halfway! At this stage of the day i abandoned any thought of doing A' Ghlas-bhein and momentarily contemplated abandoning this ascent. Soldier on i did though, i'm too stubborn for my own good sometimes!(Thankfully). Alan(Scotjamie) had stayed back at our waterfall rest stop, taking it easy in light of recent hip surgery. But he'd decided to continue the ascent to the summit and he soon caught me up. Regularly insisting "don't let me hold you back" without realising that was my comfortable pace.
Another snack stop as we reached the bowl of Coire an Sgairn. Still plodding on, still ages to go. So glad to be able to dump my bag on the appraoch to the plateau and travel light. Glad to reach the plateau, Beinn Fhada is a big bilk of a mountain and the cairn was still some distance away. Surprisingly though the route up to this point had been largely dry, it all got rather boggy up here. Some hopping, skippinig and jumping required by all to avoid the worst of it but AT LAST! THE SUMMIT!
Normally i'd insert a summit pic here but i didn't even take one.. I know i cracked a smile up there though, mountainstar has photo evidence. Monty didn't pause long, he headed straight off to his next target, while we had a bite to eat and grabbed some photos. Back down off the plateau, retrieving my bag on the way. Back down from summit 1

Danrun and Mountainstar headed for the direct route down to the bealach while Thomas, Scotjamie and i headed back down the path. Feeling a little more enthusiastic at this point, i decided to head for Bealach an Sgairne with Thomas and decide if i'd ascend A'Ghlas-bhein from there after a good rest.
Having parted with Scotjamie when we connected with the bealach path, we headed up to the bealach, spotting Danrun and Mountainstar already there. Time for a sit down. Thomas headed a little above the bealach to where he other two were sitting, i refused to ascend any further. I was a broken man. A' Ghlas-bhein looked so close from up on Beinn Fhada, but from back down here it looked like a big challenge. Mountainstar headed down, having decided against revisiting a 2nd Munro for the day, Danrun and Thomas headed on up, whilst i surveyed my map to make a final decision. It looked so close on the map, well they always do don't they?!
Back to solo walking, i plodded along at my own pace, savouring the views and getting snap happy. Even lay down for a few of the lochans you pass ( then wondered why one side of me was wet Occasionally i'd see Danrun and Thomas in the distance (thanks largely to Danny's day-glo neon tshirt) which kept giving me hope i was almost there. How wrong i was, false summit after false summit. I don't think i've ever uttered so many expletives on one hil! Stil not there yet

Nevertheless, plodded on regardless knowing i'd be there at some point. Glad of the good clear path that runs all the way to the top, it doesn't show on tmy OS map but i'd seen it on Thomas's Harvey map for the area.
At last, after what seemed like forever it took me right to the lonely, sunny summit. Though over-joyed after a hard day i didn't even sport a smile in my summit pic! Great views all round. I couldn't see Danrun and Thomas on their ascent but i could see The Cuillins, Applecross and Torridon. My only company at the top was a lonely raven. Grabbed a few pics of it on a wee rocky outcrop, but then it was kind enough to perch on the summit for me. Views, sunshine and Munro 50 savoured, it was time to start on down my ascent route. I lay down for a snack and to take a moment to savour the day. I'd happily have slept there if i didn't have an appointment with some Red Cuillin and whisky to keep. Fior the first time today i was widlely grinning as i meandered diown the path. Didn't stop for any pics until a came across some of the local residents when i was down Saw a figure ascending Beinn Fhada as i made my way past, the first soul i'd seen since Thomas and Danny hours before.
Quick work of the walk back through the glen, some nice views of the sun on it's way down. At long last after 8.5 hours ( very close to my estimate of 8 hours for the two, and that was without factoring in my hellish time on Fhada) i was back at the outdoor centre where some familiar faces were already freshened up and taking it easy. All i could think of all the way down was taking a paddle in the river croe when i got my boots off. So asap it was boots off, sandals on and into that cool and refreshing water. Felt exactly as good as i hoped. All thought of the toil up Beinn Fhada were long gone and i could finally say i'd summited my 50th Munro.

The first pint went down a treat, and the venison pie that followed it was delightful. The evening gets a bit hazy after that!

I thought after such an uncharacteristically busy hill week for me i'd be off them for a while, but i've been itching to get back out there and my only question now is "Where for number 51?"

Great report on a great way to end your walking week. Lovely pics

Well done on getting to 50

And on a perfect day! Hopefully get to meet you properly at the next meet?
Kintail... early bed friday night for the walk on saturday
.............early bed saturday night KNACKERED from the walk haha

Well done on reaching 50 Munros Nathan,that's a fair old hike at the end of a long week. Combined with your traverse of Aonach Eagach with Mountainstar i dare say it'll be a week long in the memory.

Excellent nathan. You are one stubborn guy

. A superstar to boot mind. You dug deep when it mattered

Well done on battling on to the 50 nathan,sounded tough

nathan79 wrote:Normally i'd insert a summit pic here but i didn't even take one

More proof you were up top Nathan
. - standing alongside Thomas who was scanning the 5 sisters for Bod etc, with Alan (mountainstar) front left - in amongst some other walkers of more robust variety. And a wee photo of deserved smugness after your impressive week of bagging....
Very well persevered...I know how tired you were after the many days walking - great report!!

Scoob, hopefully catch you in Braemar. It's all about the getting correct booze:sleep:activity ratio

Alan, cheers for the hard evidence.!