Another walk from last month and as the title says the story of how I came upon this great site. On this walk were my good buddys Cammy and Willy. The route chosen was a slight variation on the WH ettrick horseshoe route adapted slightly to suit walkers from moffat (mainly me, yep). Saving a round trip to Ettrick I planned a circular route starting at moffat water hall, its only a few minutes drive from Moffat and has ample parking even if a little road walking had to be suffered.

our_route.gpx Open full screen  NB: Walkhighlands is not responsible for the accuracy of gpx files in users posts
So we set off back towards Moffat only for Cammy to have to run back to the car for his sun glebs. Essential kit on sunny days like we were having back then. After he caught up we passed through selcoth fish farm and headed up the valley following selcoth burn. A good path was followed until we forded the burn about halfway along the valley. Then the track became nothing but a sheep trail on the steep side of croft head. Looking back along selcoth burn.

It was now that Willy decides to tell us that he isn't the best with heights! Great. This part of the valley is really spectacular with loose rock and landslip all around. Particularly impressive is the side of Capel Fell and the craigmichen scar. Hopefully I captured it in this pic. Landlipped side of Capel Fell

After we had made it to the end of the valley we briefly joined the SUW. The next challenge was the ascent of Loch Fell and particularly its west know. A photo from another walk shows the gradient quite well. Willy, who had got his legs back, shot off up the hill at a fair rate. Cammy and me struggled slightly but it was rather steep! The summit was eventually reached and thanks to the nice flat plateau between the east and west knowe we all look quite fresh in this trig shot. ( having a wee remote doo dah for your camera is really useful especially for candid lunch shots...) The views were good too, the solway and criffel to the southwest, queensberry to the west and all of the hartfell horsehoe were looking good in the midday sun. The bothy from Wind Fell. Shortly after passing a really boggy patch and getting up and over Wind Fell we all felt it was time for lunch. I stabbed my walking pole into the soft ground and connected my snap happy camera to the top. Took about 20 shots but this is by far the best. Cammy has no clue whats going on. 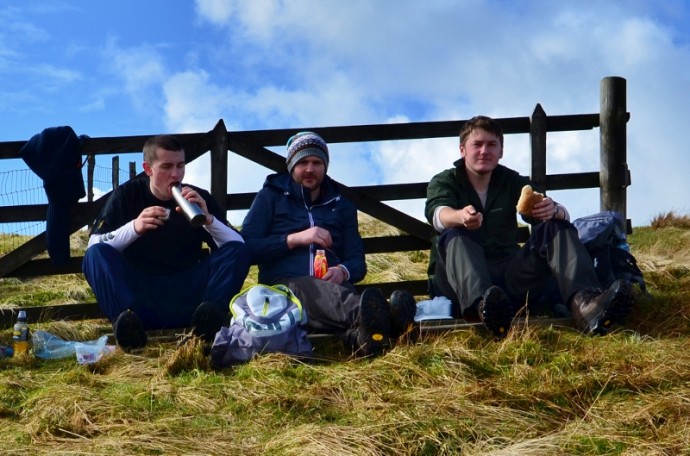 After posting these pics on facebook one of my non walking pals decided we looked like the last of the summer wine. Willy wasn't chuffed as he got tarred with the compo brush. Dunno which one that makes me but is there really a favourable comparison???

Replenished after lunch we set off for hopetoun craig and towards our main aim for the day ettrick pen. Willy then decided to spend about 15mins photographing this one cairn.

To be fair a little break after lunch is always welcome plus the cairn was a nice one. The climb up the pen looked severe although the closer we got the easier it became. It was about now that a lone figure on our route appeared. Maybe it was too long a lunch stop, maybe it was arty farty Willy taking too many pictures! Whatever it was this guy was catching us! Grr!!! The summit of the pen was reached and the curvature of the hill meant we lost sight of this lone walker. Hurried formalities were had by the ancient cairn. Cairn on the pen

We began the knee punishing descent towards Over Phawhope bothy and didn't stop until we made the forest track. Looking back the lone walker was nowhere to be seen. Where had he gone? A different route no doubt. Willy wanted to slow the pace and take photos. Cammy wanted to play bear grylls. Wait, wait, no, he was still on our route and hot on our tails. We had to move fast!!! We made it down to the bothy and once again curiosity got the best of us. The lone walker took advantage of our short attention spans and slow pace and caught us.

Not to worry though he was a friendly chap! He even pointed me in the direction of this site! Thanks laconic surf!!!

After messing around at the bothy we set off for Potburn. The abandoned farmhouse was dreary looking and a weird feeling of being watched was prevolent. It reminded me of the tale of the bodesbeck brownie. I told the lads of how this mythical cave dwelling creature tended the farmers flock at night in return for milk and honey. They wondered what would it do if you failed to pay? We pondered that thought as we headed up the pass back to bodesbeck. Still feeling slightly jumpy we walked along the forest path telling strange tales until Willy leapt across my path and almost knocked me over. The big fearty is petrified of frogs as well as heights and had spotted one on the track. He almost jumped out his boots!

After having a good laugh at his expense we eventually made it down to Bodesbeck farm and the road back to the car. 
Another fine day out in the southern uplands. With good weather and good company you can't go far wrong.
Thanks for reading folks.
Ramble on.

Cracking pics, cracking report - the southern uplands have rarely sounded so much fun

The local tourist board should recruit you and your pals. 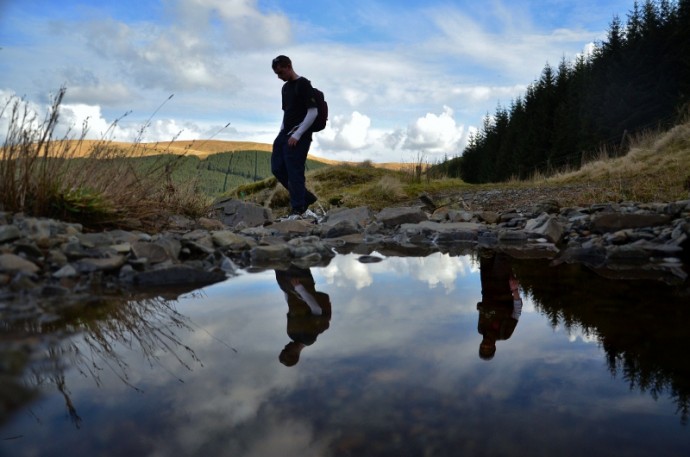 Enjoyed the read, thanks.

A great fun report, but oh my God, that second last photo is spooky, just when you were talking about a feeling of being watched too

I read this twice without noticing that!
Great report, thanks for posting

Ha ha, thanks folks, you can't beat a little photoshopping to make a freaky photo! I've got plans to head back up this way fairly soon and spend the night in the bothy. I'll have to take a torch tho, with all this sp

It'll be my fisrt night in a bothy and I'll be able to bag the hills between bodesbeck law and capel fell which have thus far eluded me. Slowly but surely I'm ticking off all the hills around moffat.

Haha, have only just seen this report, forgive my tardiness

As the "lone figure" in the fotie, i'm thinking some sort of appearance fee is due

The reason I dispappeared was I sat down to have my lunch!
Great report, glad your enjoying the site

Yeah man, its become an essential tool. Thanks again for the heads up. Probably catch you in the hills sometime!

Thanks - Enjoyed that report very much. The spookiness may also be partly born of one of my favourite authors. I recommend The Brownie of Bodesbeck by James Hogg, the Ettrick Shepherd. It is one of the most atmospheric books I have read (beats the hell out of Walter Scott....imho). James Hogg was also wont to say, when asked to pronounce upon his favourite malt whisky...."If a body could just find oot the exac’ proper proportion and quantity that ought to be drunk every day, and keep to that, I verily trow that he might leeve for ever, without dying at a’, and that doctors and kirkyards would go oot o’ fashion"

This is what makes a great walk report - some imagination!