50+ at 30 Part 3: Bynack More between to slices of Cairngorm

50+ at 30 Part 3: Bynack More between to slices of Cairngorm

Originally we were going to do a circular walk similar to those posted by Stretch (http://www.walkhighlands.co.uk/Forum/viewtopic.php?f=9&t=7659) and Alastair S (http://www.walkhighlands.co.uk/Forum/viewtopic.php?f=9&t=6558). However, after the tedious bog bonanza that was the "Moan-dhliath" Alastair S' comment "[t]here may have been a path a decade or so ago but what is there now is an overgrown quagmire – bog factor five stuff" was pretty off putting. So we pondered over the map and scoured walk reports the night before. We decided that, due to this being the 3rd day of Munro bagging in a row we'd keep it simple. This ultimately meant starting from the high level car park at the foot of the funicular railway and doubling back from Bynack for the return, starting and finishing on an easy path. It also meant we'd get to experience the beautiful view over Loch Avon and the views over the Braeriach traverse from Cairngorm twice in one day.

CGormBAvon.gpx Open full screen  NB: Walkhighlands is not responsible for the accuracy of gpx files in users posts

I should admit that as we parked up I felt a sense of shame... were we really going to hike up CG from here with such a head start? Once away from the hubbub of the car park and finding our stride the shame depleted and both of us were thankful for the well structured path. Our pace was a little bit slower than usual but still quick. We stopped briefly to watch the train disappear into the mountainside and feeling underwhelmed continued towards the Ptarmigan restaurant and promptly continued walking passed the Ptarmigan restaurant. The short route to the cairn has a reasonably steep section (hemmed in with blue string) but soon flattens out. The approach to the summit is lined with little cairns - surely helpful in poor conditions (unless covered by snow I guess).

Once at the well structured summit cairn we were a little shocked to only find two other individuals. I'd assumed it'd be busy considering how full the car park had been. Low cloud and an overcast sky meant the views were atmospheric but not as extensive as they might have been. After a few snap shots and a quick nip of brandy we were soon heading down towards the saddle. RTMcB was concerned that there might be a substantial amount of snow left on the saddle so we'd taken the axes etc. He was quite right about the snow, but the axes didn't see any action.

We twisted and turned our way down and eventually found a proper path heading down to Loch Avon below. Once on the Bynack side of the garbh allt we stopped for a pork pie break and took in the stunning view of Loch Avon before commencing our second ascent. I loved Bynack More. I loved everything about it. Great terrain, some wonderful views, an amazing sense of space down the north eastern side, the beautiful Barns (which I have to say are sooo much larger than I expected) and a great summit full of natural rock seating areas. Lovely stuff.

Before heading up Bynack's back we headed to the down to the "Big" Barns. I had a little climb and would have happily stayed there for a good hour's worth of scrambling about but alas RTMcB wanted to head on to the summit. The summit ended up being very busy but due to the size and available places to sit it didn't have a busy feel. Brandy necked and Scotch Eggs scoffed we began the return route. The "Little" Barns were the novel feature of the return route which offered some extra climbing about for me. What was great about doubling back was the change in conditions. The overcast morning had been replaced by a golden afternoon. Avon looked even better on the return.

The path back up Cairngorm which had been difficult to spot on the way down is an obvious thin scar from the Bynack side so without further ado our third ascent began and so did the beginnings of fatigue. About half way up we gave ourselves a rest and looked out over the stunning sights around us; Beinn Mheadhoin looked grand. With a warm sun on us and a real sense of humbled calm I could have sat there until the sun set on this small but magical part of the world. But the second summiting of Cairngorm was still to be done so we turned our back on Beinn Mheadhoin and continued the ascent.

The views from Cairngorm's summit were even better the second time around. Once again to our surprise we were alone on the summit of Cairngorm. A few days previously I'd given the Glen Nevis munros a bow of respect. The novelty of being alone on the summit of such a popular hill resulted in the Braeriach traverse receiving something slightly different and a good bit ruder. With my first and probably last foray into flashing at distant mountains done we began the walk back to the car park.

Wonderful day out and as it turns out a cracker of a route. 1st visit to Cairngorm's cairn of the day 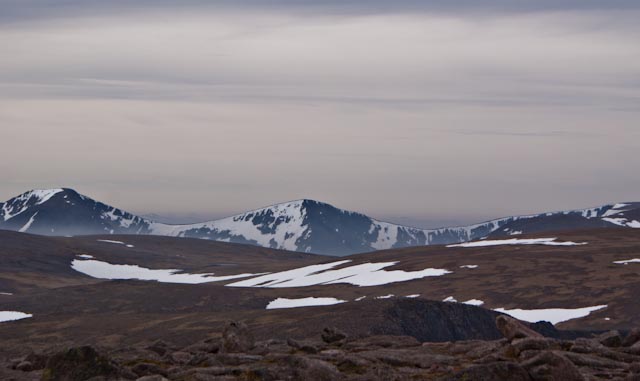 To hell with kissing cairns... I've moved on to tors! A second sunnier shot of the Cairngorm cairn

A much better day than yesterday.

I'll be doing Bynack next weekend as up Aviemore....better take in these views now incase the clag appears!!

Thought I must have missed this one, then realised you'd thrown a wobbly sequence in

Lovely stuff as I am fast becoming accustomed too, mention of those scotch eggs again I see....just to rub it in

Any feeling of shame for the start is undeserved, it's a fair old wander overall, besides, its the enjoyment of the day that matters

dooterbang wrote:A much better day than yesterday.
I'll be doing Bynack next weekend as up Aviemore....better take in these views now incase the clag appears!!

Bynack is a really pleasant hill - lots to offer and some really nice views. Hope you take the time to head over to Loch Avon - really pretty. Hope it's a good weekend

ChrisW wrote:Thought I must have missed this one, then realised you'd thrown a wobbly sequence in

Lovely stuff as I am fast becoming accustomed too, mention of those scotch eggs again I see....just to rub it in

Any feeling of shame for the start is undeserved, it's a fair old wander overall, besides, its the enjoyment of the day that matters

Thanks Chris - always a boost to hear my reports are appreciated. Rub it in? Me? Never - I just appreciate a well made Scotch egg