Left Lawers Hotel car park about 10am, sign says it's OK for walkers to use lower car park which is free if you spend money in hotel or a fiver for non-customers. Weather looked fine - sunny with a wee bit of cloud. Set off towards horn shop: Track goes up the side of house (I thought it was their drive at first) and leads to farm, the path is well signposted from there and it's a pleasant wander up, 2 stiles to cross then the Lawers conservation area bit, Meall Greigh behind: Looking back down to Loch Tay: Followed the WH route instead of going directly up, my map showed route up a burn but there's actually another to cross just before. A couple were going straight up instead. Bit of a slog up, worst part of the day! View to snowy Lawers, An Stuc, Meall Garbh: Finally got to cairn at top, other couple got there after me & our pace was about the same all day so route up the burn is probably quicker: Path down & up to Meall Garbh, bit muddy and snow getting deeper here. Path isn't always easy to see but ok on a day with good visibility: Looking back up Meall Greigh, easy incline down unlike what was to come: Loch Tay, more snow here. Snow was OK to walk on with boots, not icy: Getting higher, met a group of youngsters here coming the opposite way. They said route to An Stuc was fine - I didn't have axe or crampons and thought it could be dodgy with snow/ice so that was a relief.: Meall Garbh cairn, Lawers had the most snow and An Stuc looming further on: 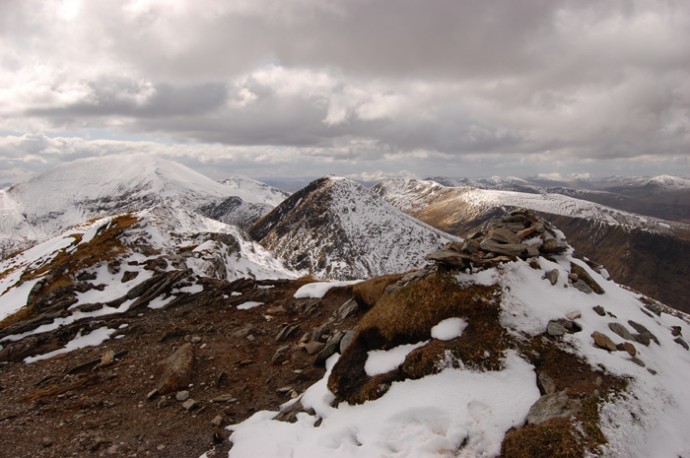 Easy descent at first then a wee scramble, clouds getting a bit darker: An Stuc, had heard this was tricky but was ok even with a wee bit of snow. There's a path that starts on the left avoiding most of the snow. I decided to go straight up instead cos that would obviously be quicker

Met a guy who had come over Lawers, snow was deep up there but no real probs - quite a few doing 5 Munros but 3 fine for me Way up was ok, no path to follow but joined it towards the top. Some hand holds are actually rocks buried in dirt and not actually attached to crags. Looking down: Onwards & downwards, had heard descent from here was dodgy but it was fine, the ascent of An Stuc from Meall Garbh was the trickiest part and going in this direction meant scrambling up rather than down which I think is easier. Descent path from An Stuc, big snowdrift blocks the way but easy to walk around: Followed left side of burn to lochan, it's steep with crags ahead so care needed. I kept close to the burn. Lochan at the bottom: Descent route next to burn, had to be careful towards the top where crags are. Snow flecks had been falling on the peaks but was getting heavier now so camera got packed away. Followed the right side of lochan, boggy with peat hags, then followed on the right side of stream which goes right back to the ascent path. There were a couple of groups camped out here, maybe DofE, some were returning to tents and didn't look impressed with snow falling - it's character building though, I thought as I returned to hotel for hot food

Good effort especially with An Stuc in snowy conditions.

And I agree with you regarding Meall Greigh as it seems a long walk but I thought the best way to tackle it is head on and not by following the burn. Also the better way around the Lochan as you begin to head for home is down the left had side as there is a better path

Great report Gman and beautiful pics of the stunning Scottish scenery "it's character building though, I thought as I returned to hotel for hot food" that bit had me laughing....great finish

Nice report..we are planning to do this walk on Sunday.

I did this the opposite way around 2 weeks ago and going down An Stuc is not as bad as it looks to be fair. Great walk. If you have two cars park one at Ben Lawers hotel and drive to the Visitors centre car park and get all 5 - Glas, Lawers, Stc, Garbh, Greigh.

My report is here:

Always interested to hear what folks think of "the peak" - so many mixed reviews. Personally I found it a fun but straightforward scramble. I reckon it all comes down to whether of not you're a scrambling fan and can handle heights.

We did this walk today..thats a steep descent down that gully to the Lochan after An Stuc!!

..i was more scared there than the scramble up An Stuc..a slip would mean rolling down to the Lochan!

..we just did Meal Garbh and An Stuc though from the Lawers hotel..Meal Griegh looked a bit bland....was a fab day!!