After a couple of weeks break from the hills having fled to Catalonia to escape the Scottish weather I was itching to get back out there and had decided on the longish trek around Culter Fell.
Driving down past Biggar I kept seeing the odd vintage British car, "must be a show on somewhere near here" i thought. As I took the minor road towards Culter Allers Farm, I saw a few more. "The show must be in a field near to the start of the walk." I figured. I parked up where the road splits for the two reservoirs and began to walk the short distance to the bottom of Culter Fell. As I walked three vintage cars came hareing past and I had to dive onto the verge to avoid being taken out. It was all a bit Toad of Toad Hall (peep peep!) as the drivers with their aviator hats and Biggles style goggles came flying round the corners. I quickly began the ascent on the path up by Kings Beck when a steward said to me "watch out they are driving up here seing how high they can get the car up the fell." Apparantly, the idea was you floored your vintage car up 8 different hills getting points for doing so. Each to their own, I suppose. I then had to get out the way as another car came flying up the path past me and seeming slightly out of control as it spun round and headed back down. I'm a vintage car fan, though admittedly American Classics, but i wasn't sure about this. Whatever happened to pedestrians right of way Start of the walk with Culter Fell peak in the background 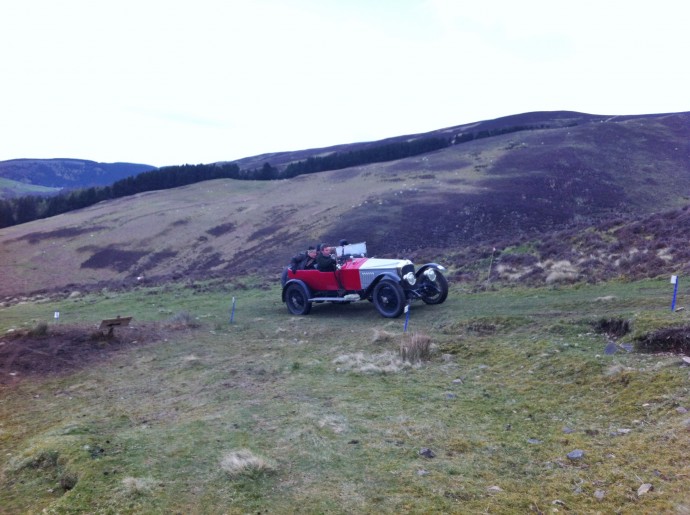 I quickly began the steep ascent up Fell Shin, glad to leave the noise behind. I had wandered off the path to escape the cars so was a little off course and had to pick my way through the heather before finding the path to the summit. The views heading up were fantastic, with Tinto dominating the landscape. Tinto appearing on the horizon Looking back down with Tinto now in full view

Great views from the summit. I had noticed that there was a donald, Chapelgill Hill, not included in the WH route just across from Culter Fell and I could now see the path looked fairly straightforward albeit a detour from the round. The weather was cold but no fronts looked on the way in, and not being one to miss opportunities to bag extra hills, I headed over following the fence line. The path was wet in places but was definately worth the trip over, the detour added about 40 mins onto the walk. After returning to Culter Fell, it was onto the second Graham of the day, Gathersnow Hill. The descent off CF was steep but the ground was not too bad. Arriving at the base of GH, I could see the fenceline veer off left and in a broad curve ascend to the summit. As usual, seeing the opportunity for a shortcut proved too tempting so I set straight up the steep north face. This was tough going due to the gradient, whether it was faster than following the fence the longer but easier way, i'm not sure but it felt quicker, if lung bursting Gathersnow Hill, I took the path straight up beside the cleugh

Anybody else doing this route who is not bagging would be wise to head down Holm Nick following the ATV path down to the reservoir. From here on the walk is a bog fest of snorkel like proportions

) it was off to the next donald, Hillshaw Head. The path was very wet in places but was recompensed by the short distance to the next summit. 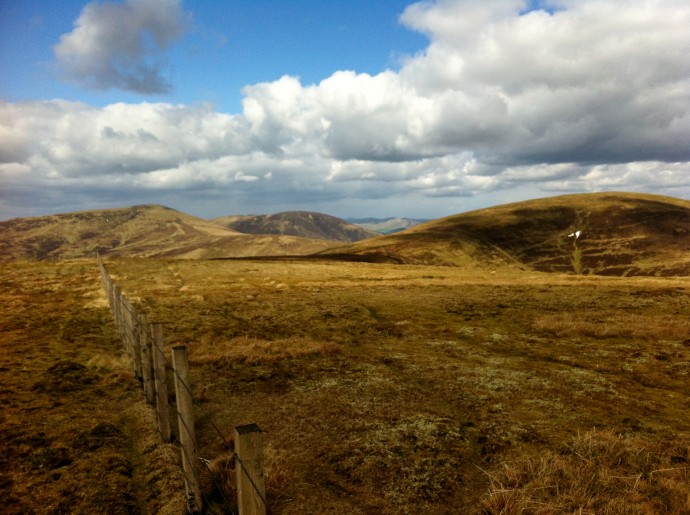 Looking back at the 3 completed peaks. L-R Culter Fell, Chapelgill and Gathersnow

A quick glance at the views and it was off to the swamps between here and the next donald, Hudderstone. Now, I don't mind a bit of bog traversing, it adds a bit of variety to the terrain, but this was unrelenting. There is perhaps two steps of dry land between each mire, this carries on for km's all the way up to Hudderstone. I was glad to reach the top and dry land Glad I checked with my pole before taking the next step! 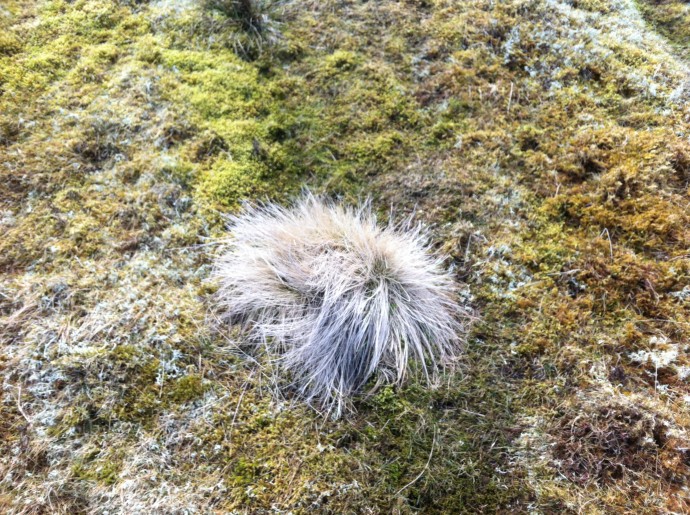 80's TV presenter Pat Sharpe was an unfortunate victim of the bog, only his mullet remains

From here the terrains dries out and soon I picked up the ATV path alongside the reservoir descending to the road below. Normally walking on a road is not a fun part of a walk, but I was craving terra firma after scuba diving earlier. The descent down in the shadow of Tinto

My legs were shot but it was a entertaining day out on the hills. Just a wee walk back to the start. Where was a vintage car when you needed one?...

Nice report ,that must have been a surreal experience being buzzed by vintage cars on a hillwalk ! Looks a nice circuit but I think I might wait until next winter and some hard frost before attempting it

Liking the vintage cars on the hills

I just did the 2 Grahams when i did this walk, wish i'd did the circular route now and took in the Donalds.

Good report, I did this circuit the week before, starting at glenkirk on the south side of culter fell going anticlockwise.

Bit left field to see those cars on the hill, until i saw the photos i thought you might be writing under the influence!

Shame about Pat Sharpe, last week he was only up to his waist

This report is so funny

Are you sure you did a hill walk and it wasnt some weird dream you had instead?

Gavin99 wrote:Looks a nice circuit but I think I might wait until next winter and some hard frost before attempting it

Very wise! I think this would make a fantastic winter walk...

RTC wrote:Very unusual and interesting report. The Culter Fells certainly do have some evil bogs.

Thanks. I knew it was going to be boggy, but the previous couple of days rainfall really did some damage

Johnny Corbett wrote:Liking the vintage cars on the hills

I just did the 2 Grahams when i did this walk, wish i'd did the circular route now and took in the Donalds.

I'm glad i did the whole round, but for non baggers it's probably not worth it, views are great from the Grahams and the going is far less dodgy

harry hill wrote: Shame about Pat Sharpe, last week he was only up to his waist

morag1 wrote:This report is so funny

Are you sure you did a hill walk and it wasnt some weird dream you had instead?

Thanks as usual Morag

I did have to check the photos to check i hadn't imagined it! Was worried I had some dodgy cheese in my sandwich which had caused weird hallucinations

I'll have to take a wander up here soon. Looks like a good round.
Its a wonder those classic cars were not grabbing tokens off poles for the fun house grand prix!!
Pat obviously was not having a 'whole lot of fun'.

Great Hills these are and you put them into good light with this report ! I'd recommend going out to Cardon Hill aswell if heading out Chapelgill Hill, a really nice hill worth the extra jaunt !

I camped just off of Hudderstone last April and I'm glad i never went across those bogs to get Gathersnow afterall, how I managed to find a decent pitch up there I'll never know !

WTF??!! Very entertaining re: Pat Sharp. Nice bagging of the Donalds there.

Gavin99 wrote:Nice report ,that must have been a surreal experience being buzzed by vintage cars on a hillwalk ! Looks a nice circuit but I think I might wait until next winter and some hard frost before attempting it

I did this walk on 1st December this year during the cold snap that we had precisely because I had heard so much about this cracking walk being a challenge due to.the boggy conditions.

It was well below zero when I did it and the ground was frozen solid which made it a brilliant day out.

I posted a walk report with photos on here......