Esk Pike, Bowfell and others

Esk Pike, Bowfell and others

Had a very enjoyable walk with John and Peter on a day of good weather (for once!).

In October, Peter and I climbed the Langdale Pikes, descending to Stake Pass and then over to Rossett Pike. We then descended via Rossett Gill and back to the car park at Dungeon Ghyll. It was a good outing, however the weather wasn't great and the clag prevented views of any worth.

In contrast, our outing on Friday was brilliant. The air was clear and distant views could be enjoyed.

We left the National Trust car park at the Old Dungeon Ghyll pub at 9.30am and headed up Mickleden. A few others were making their way too, but is was far from crowded. Good banter ensued and before we knew it we were beginning the ascent of Rossett Gill. Snow from earlier in the week was still evident on the upper slopes of Bow Fell and in the bright sunshine it looked a treat. When I reached the flat area above Angle Tarn, I decided to go the short distance to the summit of Rossett Pike and soak-in the views that had evaded me six months ago. What a picture, looking down Mickelden with the Langdale Pikes on my left and the Crinkle Crags and Pike of Blisco on my right. Views were also good down Langstrath and over to Glaramara. At the National Trust car park at Old Dungeon Ghyll At bottom of Rossett Gill View back to Langdale A distant Blencathra from Rossett Pike The Great Slab on Bowfell from Rossett Pike

I headed back to John and Peter. Our next target was to drop down to Angle Tarn, cross the beck and head upwards and southwards to Ore Gap. It wasn't our intention to climb Esk Pike, but seeing that we were so close I asked the others if I could press on, leave my rucksack under their care and head up to Esk Pike. It was worth it. Again, good views to Great End (seemed to be close enough to touch) and just past it was Great Gable. I wasn't entirely sure which part of Esk Pike was the summit so just in case of misjudgement, I went to both tops. Headed back to Ore Gap and met up with Peter and John again who were having a fuel stop so quickly had a cup of coffee with them before starting the short climb to Bowfell. Heading up to Ore Gap, view back to Rossett Pike and the Langdale Pikes Distant view of Skiddaw and Derwentwater Since reaching Ore Gap we now had views south to Morecambe Bay and beyond. We could also see that the weather in this direction was deteriorating with cloud building and snow showers in evidence. This was in complete contrast to the views to the north which were of blue sky and 'cotton wool' cloud.

A few more walkers were on the hills now with half a dozen or so at the summit of Bowfell. It is one of those hills that, in my opinion, for such a big hill seems to hide itself away from prying eyes until you are upon it. Along with the Crinkles, it is a great place to take in extensive views of the Scafell range. A few flakes of snow fell at this point and the tops of Scafell and Scafell Pike disappeared into cloud. We left the top and descended over boulders before joining the obvious path that takes you past the Great Slab, a wonderful smooth rock formation that you wouldn't want to walk across in anything other than dry conditions. From here we descended to the Three Tarns and then it was time to negotiate the Crinkle Crags. The Great Slab up close

It is an enjoyable walk over and around this mini range of tops. I say 'over and around' as as we descended the last top, we were unable to reach the bottom of the Bad Step due to erosion so had to back track a few hundred meters and then take a relativley new path to the south and rejoin the main path again. View back to Bowfell from the Crinkles 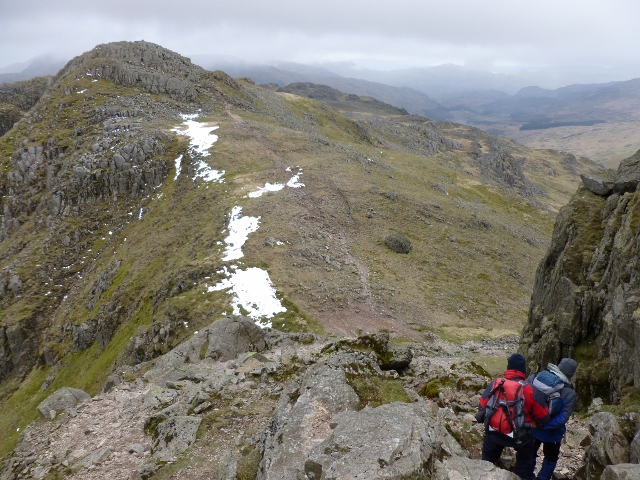 Dropping down to the Bad Step Close up of the Bad Step

The next hill in my sights was Cold Pike. Again, Peter and John agreed to walk on the main path that bypasses Cold Pike and heads towards Red Tarn and Pike of Blisco. I left my rucksack with them (a bit lighter now that I had eaten lunch!) and headed across open ground before climbing a short and steep section to the summit. It also has two tops, so visited them both. The Coniston hills seemed to be nearby to the south. I left the summit heading north west to rejoing Peter and John near to the outlet beck from Red Tarn. Pike of Blisco from Cold Pike

My legs were beginning to feel tired by now and it seemed hard work to make it to the top of Pike of Blisco. But it was worth it as the Langdale Pikes were bathed in late afternoon sun. The summit is almost 'Tor' like and again, has two tops. We missed the path away from the summit and after a little meander regained it before making the steep ascent od Redacre Gill. We joined the road which comes over from Little Langdale and walked the mile or so back to the car. The Coniston hills from Pike of Blisco Had a fantastic day in good company and beautiful surroundings.

Brilliant report and pictures - and route choice! Rossett Ghyll is a killer isnt it?!

I did a similar walk yesterday but the other side of the valley, I will write it up when I shake this cold and flu that has kept me bed ridden all day...

Stunning stuff MR, a good long round too in great conditions, what more could a man want

Great pics and a really good report. It's no wonder you were feeling tired on the way up Blisco that's a canny big round.

Some wonderful pictures and very enjoyable report. Hope I get weather as good this up-coming weekend based in Braithwaite but the forecast looks a teeth-gritter.

Quite a hike!! Enjoyed the report and you caught some really good pictures there!!

Thanks for your kind comments.

CP - Indeed Rossett Gill is a killer. Having said that, I wouldn't have liked to walk back up our descent route off Pike of Blisco either.

CW - Conditions were great - I normally get clag so really did appreciate the clear air this time.

JK - I was tiring. However, I did the 40 mile Keswick to Barrow walk a couple of years ago and could hardly walk the five yards from car to house when I got home!

JGKES - Fingers crossed with the weather this weekend. Braithwaite is a great place to be based.

GH - Just got new compact camera and I am pleased with the results.

Here's to more of the same in the near future. Cheers.

A fine round over some familiar peaks, and it's good you got ideal weather.

Aren't you the team I encountered yesterday (Sunday) between Stake Pass and High Raise (you were coming up the pathless bit while I was descending)? If you were, hello again!

MR, you're not the only to pay a fleeting visit to Cold Pike while companions have given it a miss.

Hi Simon, sorry it must have been 3 other handsome chaps you met on Sunday - we were probably still recovering.

MiniRambo wrote:Hi Simon, sorry it must have been 3 other handsome chaps you met on Sunday - we were probably still recovering.

OK, sorry for the mistake. Hello to them if they're reading!