Pacing myself on Mount Keen

Pacing myself on Mount Keen


[updated timings now I've realised some of this was based on the time stamp on photos, when I hadn't moved my camera with the clocks going forward! No wonder my pacing didn't feel right

Staying with a friend in Dundee the night before meant that Mount Keen was the best choice for my lone walk today (completing the Angus hills). After my usual dancing the night away then a few hours of sleep

I set off, confident I'd find my starting point as I'd done my homework [Google Street View rocks!! No sat nav, but I was able to recognise the junctions and turn offs and even the car park at Invermark as I'd already been down these roads online

This would be my third hill walk alone, good visibility was forecast and there's path all the way so I was happy to find my own pace as I sometimes struggle to keep up when out in groups.

No GPS but I had a printout of the WH map and a compass (didn't use either of these!) and also the route description from WH. I did refer to this a couple of times, just for reassurance Bear left just before the house

There were 2 gates within minutes of each other just after this then out in to the open glen. My heart sank when I saw the clag up ahead but it soon cleared and I had a first view of my target... in snow [ A few snow flurries along the way I was starting to wonder if I'd passed the Queen's Well without noticing, but it was in the open on the flat and really couldn't be missed (hadn't zoomed in enough on the map to realise how close it is to Invermark Cottage). Crossed Easter Burn on stepping stones no problem and I reached the iron grid over Ladder Burn exactly 1 hour after leaving the car park. Since I noted the time at this point, I used this as the marker for the start of the ascent.

The climb was straightforward on a good path. Snow spells lessened and the sun stayed out longer. As I rounded the bend in the zig zag I could see there wasn't really much snow up top after all. After this bend in the path the incline levels off a bit and I was able to pick up a bit more speed - now just in base layer, fast pulse but not pushing myself to the point where I needed to stop to catch my breath. Heading up the near flat, I could see a truck parked ahead

First thought was that's just cheating! but it turned out to be for the workmen who were up there re-laying the path

I'd only just passed the 3 workers when I saw a quite a crowd ahead of me - first people of the day! Since I hadn't seen anyone ahead of me coming through the open glen I guessed this group were on their way down. It was actually 2 groups though, some on their way down and some up. As I passed the group going in the same direction as me, one told me I was making this look easy

That added a spring to my step

as I climbed through the snow (fleece back on by now!) to reach the trig point. 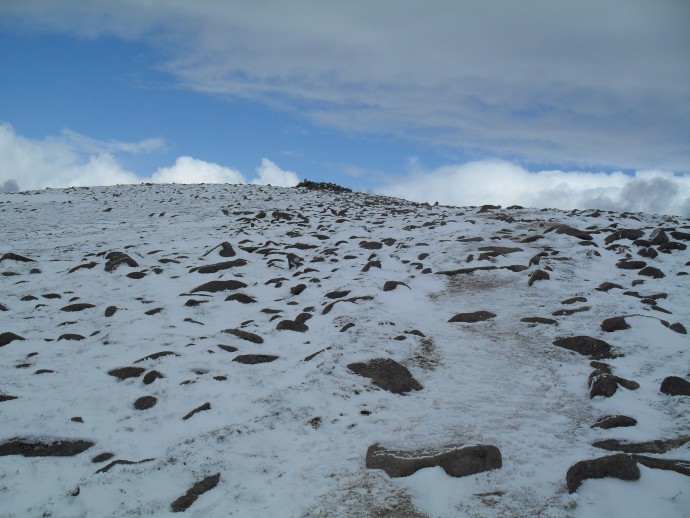 Summit reached 2hr15 after leaving the car park. Biting wind up there so I only stayed 10 mins for a snack bar and a few photos, glad to help the trio who arrived soon after with their group summit pic. Views in the distance were limited but the other side of the trig point showed evidence of driving snow (glad it wasn't coming down now!). Heading back down the same way, views to the West opened up - Lochnagar's on my list of 'possibles' for next week 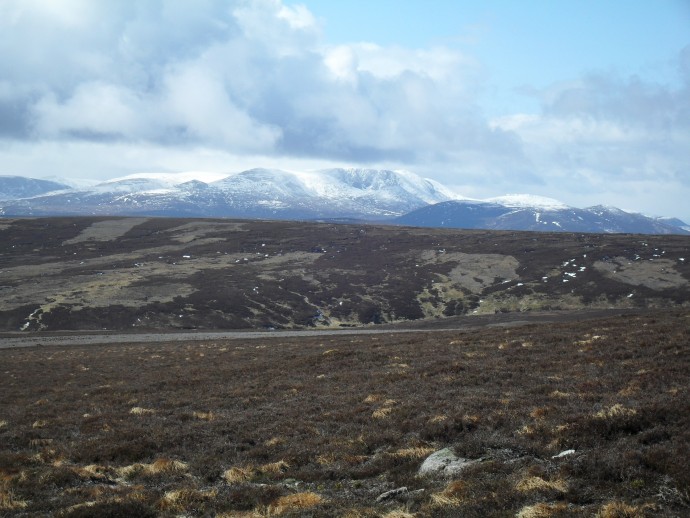 The descent was clear but the sun and snow were taking turns and for a short time the weather closed in behind me. 13:56 at next bend, summit disappeared

I reached the iron grid and crossed Ladder Burn again 1hr after leaving the summit. From here it was a straight path back... I loved the sun/snow combo and was fascinated when they played together. Stopped by Queen's Well again (in sunshine this time), took lots of photos - some of views, some of the weather.

I was grinning like a Cheshire cat for most of the walk out, singing to myself along the way.

50 mins to get back to the car, having had a great day! Queen's Well (couldn't make out what it says) thick snowflakes in the glen almost back at the start, a beautiful day :)

Nice report Fiona, Im hoping to get myself up there this year so your report was very timely

Special hill for me. My 100th. You saw more of it than i did. Love the photo to Lochnagar

Hope you have a gps with you next time

Thanks Morag - I'm sure you'll enjoy it!

Glad to share Jonny. A good hill to do in poor visibility (if there is such a thing!) as the path's excellent

Hope you have a gps with you next time

- will take it next weekend

p.s you will love lochnagar