I'd been meaning to climb Ben Vane and Ben Vorlich for quite a while. After reading the walk reports on Walk Highlands covering the two mountains in one day I decided I wanted to do them together. I wasn't so keen on doubling back on myself though and didn't fancy walking on the tarmac any more than absolutely necessary so I dug out my copy of the Harvey's Superwalker map of the Arrochar Alps and picked out a route directly down the side of Ben Vane towards the west side of Loch Sloy Dam. I'd been up camping on that side of the dam a few weeks ago testing some new camping gear and had spent quite a while trying to work out a route directly up Ben Vorlich from the east side of the dam. I knew that section was going to be fairly steep but my last proper walk was Ben More from Crianlarich in winter conditions so I reckoned I could manage it. Kev was called, a day was agreed and our bags were packed...

We set off from the Inveruglas car park at half past eight on Sunday morning and quite quickly made our way up the tarmac path past Coiregrogain farm and across the bridge on the left towards the forestry. This was a fairly early start by our standards and we were feeling quite smug at the possibility of maybe being the first walkers out on the hill for the day. As we left the forestry track and began our ascent onto the ridge of Ben Vane our pace began to drop a bit and it wasn't long before we were overtaken by an older but much fitter man than ourselves!

After reading the various reports on Ben Vane I hadn't completely been looking forward to it having heard it described often as a very punishing ascent. I have a feeling we were just very lucky to have gotten perfect conditions on our way up Ben Vane; beautiful sunshine with a perfectly cool breeze the whole way up. All in, we were very pleasantly surprised by just how attractive a mountain it is. The light section of scrambling required near the summit was fun and was a good warm up for what lay ahead later that day. The view South past A'Chrois on the right and Ben Lomond on the left from the summit of Ben Vane. Lochs Lomond, Ard and Katrine from the summit of Ben Vane.

Just a moment behind us at the summit came the second other walker of the day who stopped for a moment to chat before making his way off towards the Cobbler via Beinn Ìme. After a quick bite to eat and a drink we were off on our way down to the dam, first heading towards the ridge leading to Beinn Dubh before quickly veering right between the cliffs through some virgin snow and then picking our way down through the boulders and bogs until we reached Loch Sloy. Looking back on our route down the side of Ben Vane from half way up Ben Vorlich.

After crossing the dam and looking up at the "path" ahead, we discussed the possibility of abandoning our chosen route and walking back down the road to the cairn marking the established route up Ben Vorlich. After a minute or so of deliberation we agreed to man up and follow through on our original plan! I wish I’d stopped to take more pictures of this part of the walk as, despite the hydroelectric influence on this mountain, once we climbed past the dam it retained every bit of the rugged wilderness it once was. There are so many little nooks, caves and crevasses between the many boulders and cliffs. My imagination ran wild imagining who and what had sought shelter over the years in all these various hiding places. The rocky nature of the Arrochar Alps always gets me thinking about the moment each particular boulder came to rest in the position I found them, how colossal the noise must once have been in this place that now offers such an abundance of blissful silence. 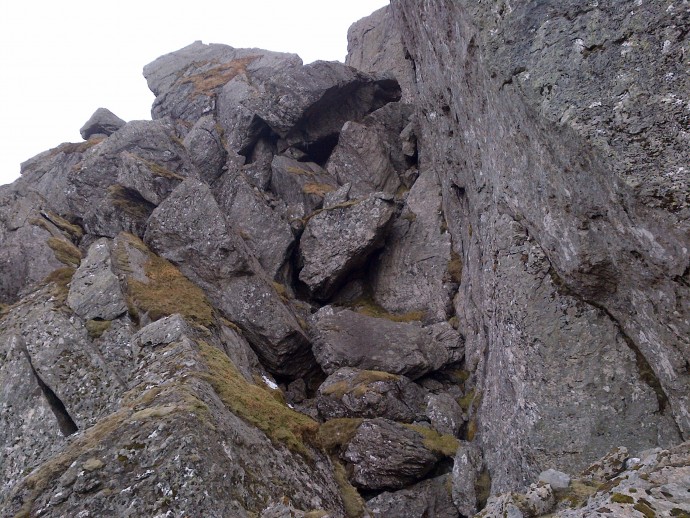 A precariously stacked pile of boulders on the side of Ben Vorlich.

By about half way up Ben Vorlich the ascent had turned into a constant scramble, often on all fours or stopping to discuss where to take the next foothold. As the route was so steep the only real way of knowing how far we had to go was by looking back towards Ben Vane and gauging how close we were in line with its summit, then adding on the difference to the top of Ben Vorlich! 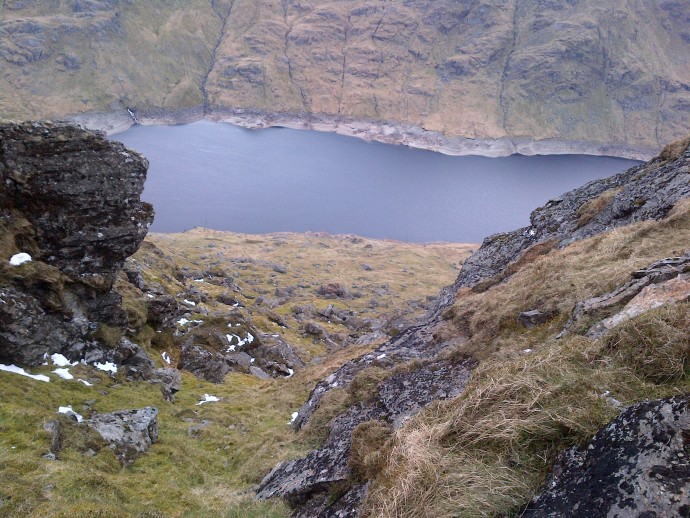 Despite the occasional drops of snow coming and going the sun was out and the clouds were far away when we reached the top of Ben Vorlich and our efforts were rewarded with a perfect view west down the Firth of Clyde to Ailsa Craig. 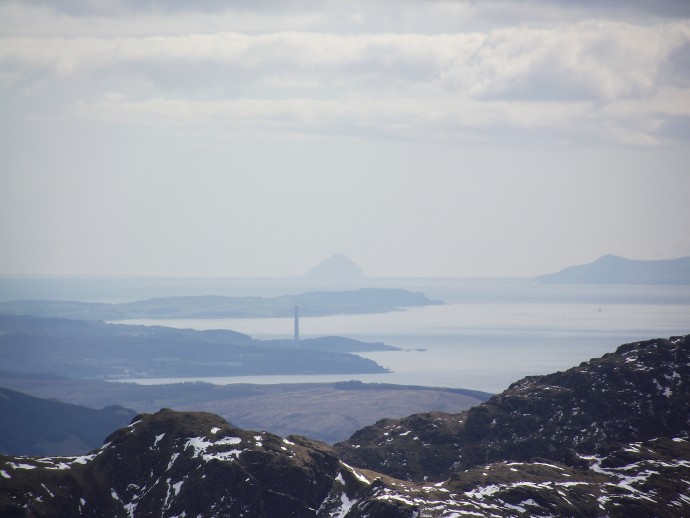 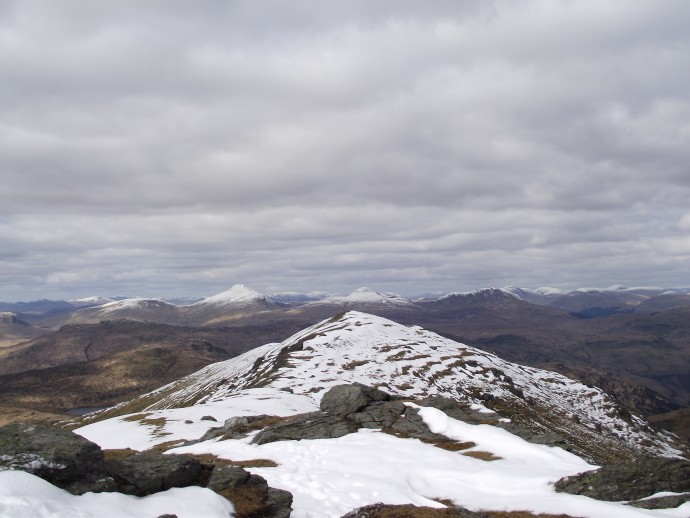 The view north from the summit of Ben Vorlich.

After a quick roll and cheese and a slice of chocolate cake it was time to make our way down the more established route towards the tarmac path below. Just as we left the summit we bumped into the third and final person we'd met all day. After a short chat about how perfect the visibility had been we bid him farewell and were on our way. We made it back to the car for half past five. A short time later we were enjoying a well-deserved pint at the Inn at Inverbeg before Kev dropped me off at home for some Deep Heat and a good sleep! 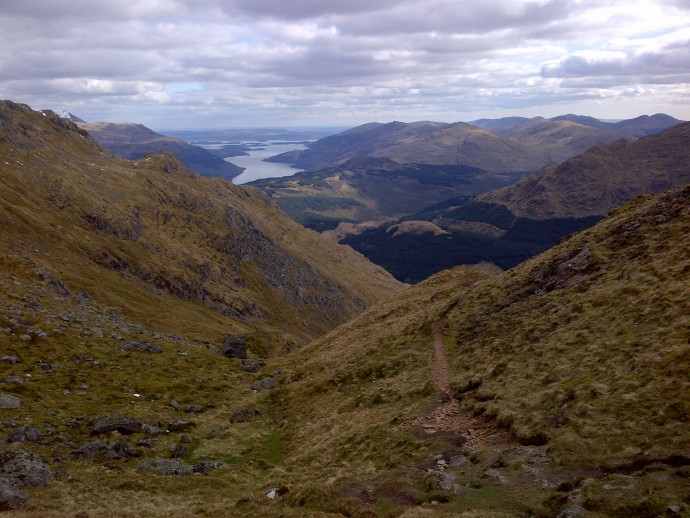 Nice report Adamg. Excellent set of photos. I done these to but went the trade route back to the tarmac. It was a steep ascent form the cairn so well done on scrambling straight up Vorlich.

Thanks Monty, to be honest after coming down the main route of Ben Vorlich I don't think there was too much of a difference in terms of steepness. The scrambling was probably the only major additional obstacle. Next time I do them I fancy a horseshoe shaped route heading straight across the ridge from Ben Vane, over the top of Beinn Dubh and right round the north end of Loch Sloy which looks like it would then give you a much more gradual ascent up Ben Vorlich.

Wonderful stuff. I must admit these two beauts had slipped my mind with all my current thoughts of great western ridges. Your photos are a good reminder of the fun that is to be had further south

SMRussell wrote:Wonderful stuff. I must admit these two beauts had slipped my mind with all my current thoughts of great western ridges. Your photos are a good reminder of the fun that is to be had further south

Plenty of fun to be had on the Arrochar Alps!