A beautiful day so I set off for the Afton hills. I parked the car on the Afton road before Craigdarroch Farm and got kitted out under the watchful eyes of some rather shaggy looking calves.

Blackcraig was to be my first port of call and I had pondered whether to head up via Quintin Knowe (more track, gentler gradient, longer) or along Craig Glen and up by the Pollachie Burn on to the col (less track, steeper, shorter, possibly wetter). As it turned out I ascended, unplanned by the Black Craigs (no track, too steep, impossible). The original plan was to follow the farm track up the valley then head up on to the col. The first problem was that the track was not on the valley floor. It gradually climbed up the Craigbraneoch side of the glen and I didn’t fancy unnecessary ascent and descent (I am homozygous for the laziness gene). Better to cross Craig burn and walk along its eastern side heading for the col. And there before me was a footbridge. What’s more a little way past the bridge was a sign with a walker and an arrow pointing the way I was going. Here I committed an error of judgement, but with the best intentions. Why walk along the burn then start climbing after half a mile? I decided to begin a slow gentle climb as I went. Whenever my path was obstructed, by a rock for example, I would climb rather than descend. This had me gaining height more quickly than I had intended. A jutting outcrop had me climb even further, rather than drop below it. Before I knew it I was up amongst rocks and the best routes were up rather than across. So I climbed a good 500m short of the Pollachie Burn.

As the gradient eased, a chubby fox ran away from me but too quickly for the camera. I’ve never seen a chubby fox before. Those more rural than I have been pointed out that it was probably pregnant rather than fat. The summit of Blackcraigs has several substantial cairns and a small shelter to rest from the wind. The visibility and views were great. I could see the Galloway Hills, Arran, Kintyre (I think), Ailsa Craig, Screel, Criffel, the Lowthers, Tinto, Skiddaw, and distant snow covered peaks to the north. Closer were the craggy slopes of Craigbraneoch and the Carsphairn hills.

There is a faint track heading off along the fence towards Blacklorg, and another sign with a walker and arrow. It’s a straightforward walk, by the fence, across to Blacklorg. The terrain was easy going except in the col, where there was an expanse of waterlogged sphagnum moss, which tested the waterproofing of my boots. The right boot failed the test despite recent re-proofing. At Blacklorg another sign points across to Cannock Hill. Here I stopped for refuelling and considered my options. Follow the arrows over to Cannock? Continue on to Meikledodd and Alwhat? Both? Since the weather was so good I headed on towards Meikledodd, following the fence. The col here also had some watery moss. This section took me over Littledodd Hill which is really just a false summit of Meikledodd. Once at the cairn-less summit, (edited) the Water of Ken could just be seen to the south. Next was Alwhat, again following the fence over the col. As I walked towards the summit, the Afton reservoir at last could be seen in its entirety and I was beginning to flag. I decided that I had used up all my metres of ascent, and from there it would have to be downhill.

Alwhat’s summit is of the minimalist type. No trig, no cairn, but some fence posts to lean on. While leaning, rehydrating, musing, and gazing at the views, I found my inner strength gradually returning. The options at this point were to head down to the reservoir (no more ascent) and back on the road, or over to Cannock Hill and Craigbraneoch.

I had decided earlier that if I arrived at Alwhat within four hours I would go for the extra hills. It was 3h 36m. My dislike of descent-reascent had led me to to consider contouring back round by Meikledodd. This now looked quite a long way and I suspected the terrain would be less easy on the lower slopes. The slopes up to the col between Blacklorg and Cannock hill didn’t look especially steep so I decided to take a direct approach. The way from Alwhat to Cannock

I headed down into the Montraw glen heading for the end of the Blacklorg burn, and from there climbed just a little west of north to rejoin the fence on the col. The valley actually has a number of drainage ditches, so the ground wasn’t as wet as I had expected and the climb was easy going. Here I met another post indicating the way. Cannock Hill is the first and largest of three prominences on a spur arising from Blacklorg, the other two making up Craigbraneoch. Cannock has a small cairn and great views. Another post nestles in the col between Cannock and Craigbraneoch and points towards the dam. Presumably there is a way down that way.

I continued on to the rocky summit of Craigbraneoch for a final sit down and to finish my coffee while enjoying the views. 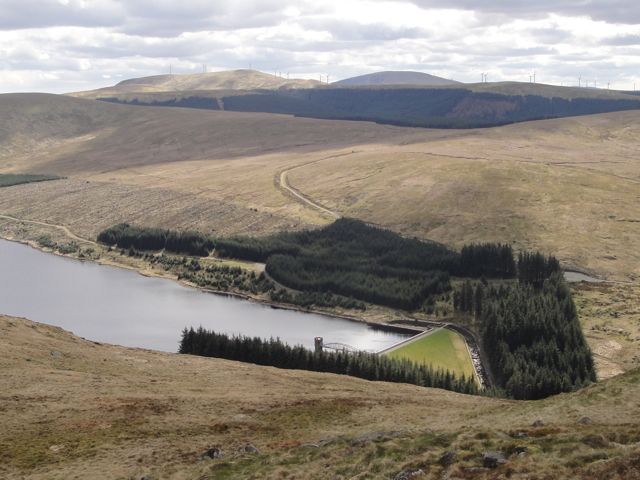 Rather than head directly off the rocky north face of Craigbraneoch I decided to head back to the col and down from there. I had been able to see from Blackcraig that the path up the valley has been extended much further than that shown on google earth and I intended to get on to that. Craigenbraneoch and the path below it

I began heading down a little short of the col, certainly to the north of Horse Craig, which had me negotiating some stony sections but soon got me to the path. Unfortunately there was a deer fence to climb to get to it. From there it was as easy as following the path, then track, back to the farm.

I felt obliged to pause briefly at Afton Water which was indeed flowing gently. My final decision was how to cross it. There is a ford, a vehicle bridge and a footbridge. I chose the latter.

This was a pleasant walk, in beautiful weather, with excellent views. The hills themselves are a little monotonous, though the walk can be spiced up by using some of the rocky sections as I had done. If a shorter walk is needed it looks as though there is a way marked route taking in Blackcraig, Blacklorg, Cannock Hill, and Craigbraneoch.

Blackcraig.gpx Open full screen  NB: Walkhighlands is not responsible for the accuracy of gpx files in users posts

I hope you enjoy your GPS. I had a simple one (£70) for ages but it wasn't user friendly and spent most of the time in my bag for emergencies. Now I have GPS on my phone and use it much more. I too like to make sure I don't mistakenly miss a summit. GPS is a godsend in mist and here in D&G we get lots of that on the hills. Last year I was on Alhang in the mist and noticed walking poles at the summit, and only then noticed the walker just a few feet away putting his waterproofs on. Meikledodd I found interesting because what appeared to be the summit was a small area of moss. Standing on it I sank and areas near may have been higher! Several of my GPS tracks have me wandering about looking for the summit.

Wandered around and camped on these hills in my youthful days as a New Cumnock resident. Nice to see reports from them every now and again, but still haven't been back for the 'planned' trip yet- hopefully this year.
Cheers for reminding me.