Langstrath.gpx Open full screen  NB: Walkhighlands is not responsible for the accuracy of gpx files in users posts

The freezing level had been forecast to be at 300 metres in the Lakes, and I knew there'd been some recent snow. So I turned up at Stonethwaite with full winter equipment and clothing. Driving along on the A66 I'd seen snow on Helvellyn and Blencathra, but not that much. However, I wanted to get some good training in ready for some longer walks I hope to do in Scotland. So carrying the axe and crampons might prove a good excercise anyway

Also, this route involved both the Central and Southern Fells, so I had the extra weight of two Wainwright books to carry

The first objective was Eagle Crag. Approaching the Fell by Wainwright's route, the gully providing the key to ascent was found. The route heads right after the gully, but first I made a detour left to NY 2757 1219 for the view of Eagle Crag's vertical face. Continuing the ascent, a view to the head of Langstrath, backed by the Bowfell group, opened up. On reaching small, rocky summit, the next target, Sergeant's Crag, appeared to the south. Now the long, steady, and largely pathless climb to High Raise followed. The top is pretty flat, but still has excellent all-round views. West to Great Gable, and WSW to Bowfell and the Scafells. 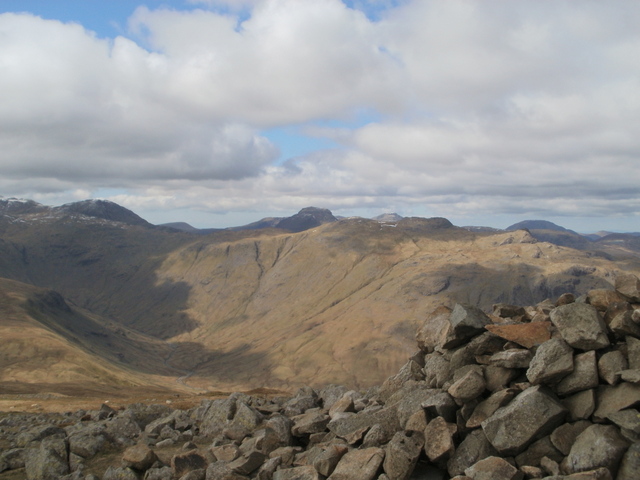 This was my seventh visit to High Raise, highest of the Central Fells. I've never climbed this hill without also visiting Sergeant Man, and vice versa. The height drop between the two is minimal, so the latter doesn't count as a top in most modern lists. But it is a Wainwright, and still deservedly popular. It has good views to the south, including this one to the Coniston fells and Pavey Ark. A good spot for lunch as well

Next the route headed west to the depression between High Raise and Thunacar Knott. After the depression, a pathless descent, steep in places, was made to the summit of Stake Pass. Here the crossing was made into the Southern Fells region. A path was picked up that ascended steadily to Angle Tarn. Everything had gone well so far, and I headed on up to Esk Hause. On reaching the pass the Gables looked impressive to the north-west. I turned left to head up Allen Crags, not a long ascent from here, but at this point my legs first began to feel it. No big problem though, and the summit was soon gained. Allen Crags is a great view point. The Langdale Pikes stood out ESE, and looking ENE from the summit was the next objective, Glaramara. The ridge from Allen Crags to Glaramara is a classic, passing several attractive tarns. The Hewitt of Red Beck Top was visited along the way. On arrival at Glaramara's main Summit cairn, a beautiful view along Borrowdale opened up. The ridge route that followed to Rosthwaite Fell is a difficult one to navigate. After picking a way down from Glaramara which included some steep sections requiring care to negotiate, I made my way towards Dovenest Crag's summit. This is a Hewitt and technically the highest point of Rosthwaite Fell, but not the Wainwright top.

My legs were starting to fatigue as I climbed to the top, and the extra weight of the axe and crampons had not been necessary. There was little snow and the temperature seemed higher than forecast. But as I'd mentioned earlier, it was proving to be a good fitness test.

I made it to the cairn and looked over towards Honister Crag. Next I moved on to the rocky little top of Rosthwaite Cam, and forced my tired limbs to make the scramble to the top. After Scrambling back down I headed towards Tarn at Leaves, with Bessyboot, the Wainwright top of Rosthwaite Fell, visible behind the tarn to the left, below Blencathra. So I passed the tarn and pushed myself up onto Bessyboot, and now it was downhill all the way

I made my way to Big Stanger Gill to pick up the path down to Stonethwaite. My legs were like jelly now and care was needed for the descent, which was steep and rough in places, alongside the stream. At last I arrived back at Stonethwaite, feeling pretty exhausted. I was surprised that this route had been so demanding. I'd felt fine after finishing the Yorkshire Three Peaks and climbing the Ben via CMD. Even the Cairn Toul - Braeriach traverse hadn't left me feeling quite as tired.

But it had been a great workout!

Great report Simon, no wonder the legs were a bit jellylike on the descent, that's a fair old round, some cracking good pics in there - what a great day in the hills

Bit of an epic wander this Simon but looks like you were lucky with the weather and got some really good pictures as well.

Hope the legs have recovered!

Wow, that was a great walk and really enjoyed your report

You've got some fantastic photos as well

Chris and Gary, yes it was a great day and I've fully recovered.

Susie, I hope this brings happy memories of your last fell walk, and I'm glad if our tales and pictures can bring the tops back to you. Also, there are so many beautiful views from low level in the Lakes, which I'm sure you still enjoy.

You covered a lot of rough ground so it's no wonder you were shattered. Great report and pics, enjoyed that.

Thanks, John. I suppose parts were a bit rough, particularly the initial Eagle Crag ascent, and the Southern Fells section.

Nice route - I hated Eagle and Sergeants Crag when I did them as I fell in a bog up to my neck and had to swim out (literally) and Todd broke his foot and needed an operation on his birthday (and the day we went to Snowdon!!!), but you actually make it look quite tempting to go back at some point! I see what you mean now about us both linking the two books on the same day!

The climb up to Eagle crag at the start looks steep though?!

I was surprised by Glaramara and how much of a climb it was as opposed to a walk! I never expected it to be so craggy!

ciderpeter wrote:The climb up to Eagle crag at the start looks steep though?!

If you use Wainwright's route you can breach Eagle Crag's defences, and it's not as steep as it looks from Stonethwaite, Peter. There's a little bit of easy scrambling as you get near the top.

The route wasn't too boggy. Perhaps the wettest part of the whole route was between Stake Pass and Angle Tarn.