I started writing this up last week, but it got eclipsed by the Beinn Lair report. A nice little hill, but a bit less exciting than Letterewe!

My wife was working down in Grantown on Wednesday afternoon, so I decided to hitch a lift with her, and do a hill I hadn't been up in the area. Carn na Loinne doesn't look overly exciting on the map, but is well situated for views of Strathspey.

Carn na Loine.gpx Open full screen  NB: Walkhighlands is not responsible for the accuracy of gpx files in users posts
After a cup of tea in the bakery at Grantown, I left in the car and parked in a passing place midway between Knock of Auchnahannet and Auchnagallin. There had been heavy showers, but the sun was out now. Having soaked myself the previous day on Corryhabbie Hill, I was out of dry walking clothes and boots. I did this walk in wellies and an old jacket instead - I looked more like I was going out for a day of fishing than walking!

Carn a Ghille Chearr and some coos: 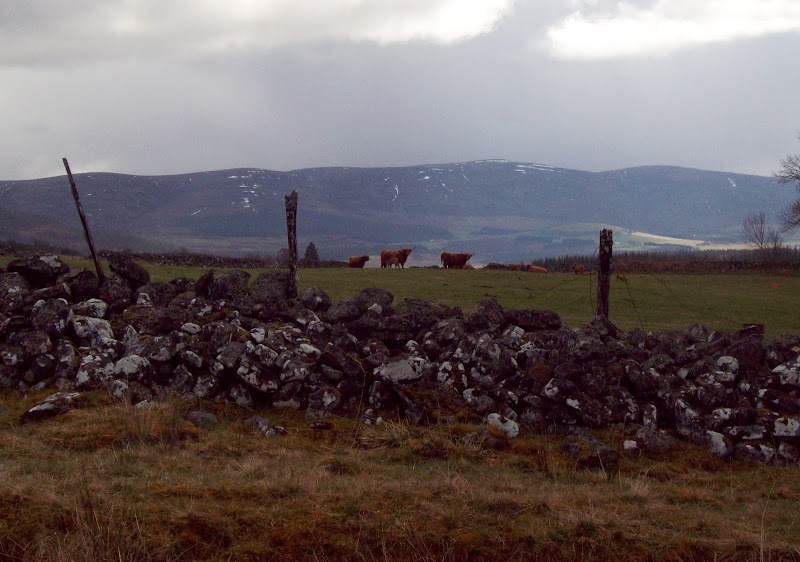 I walker back up the road to Knock of Auchnahannet and picked up the track behind. This did most of the hard work, taking me to within 150m of the summit, with the views opening up the whole way. The high Cairngorms were shrouded in bad weather, but Strathspey and the Cromdale Hills took over instead. 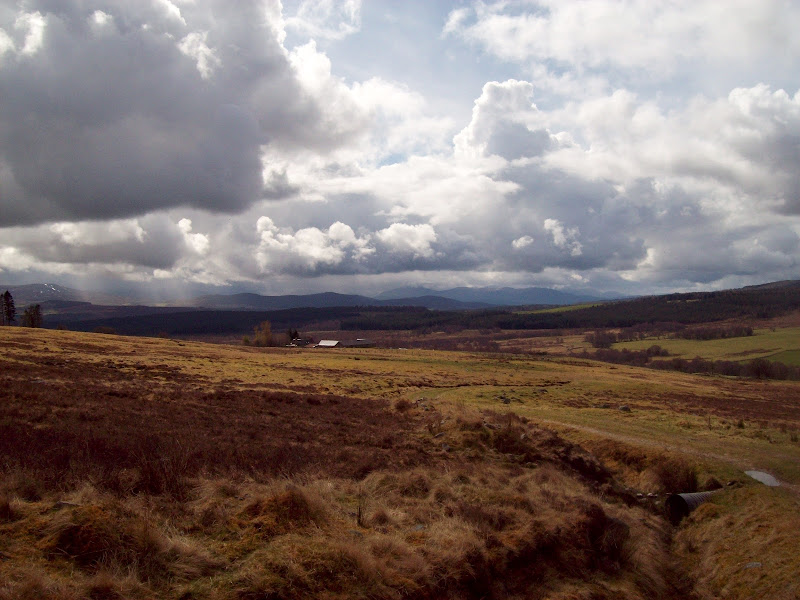 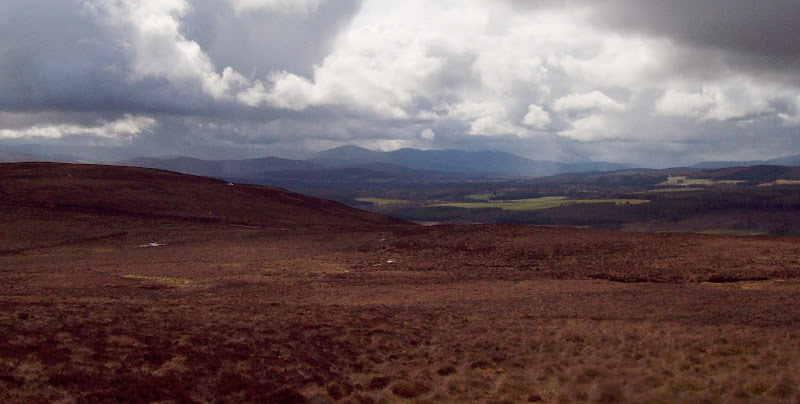 Away from the track, the going towards the summit was rougher and wetter - perfect welly terrain actually. I picked up a line of grouse butts for the final ascent. Good views from the summit, with the empty expansed of the Dava moors to the north and west. Looking north past the Knock of Braemoray to the Moray Firth was also attractive. I had a leisurely lunch here, as I had plenty of time to get around my walk.

West across the hills around Lochindorb: 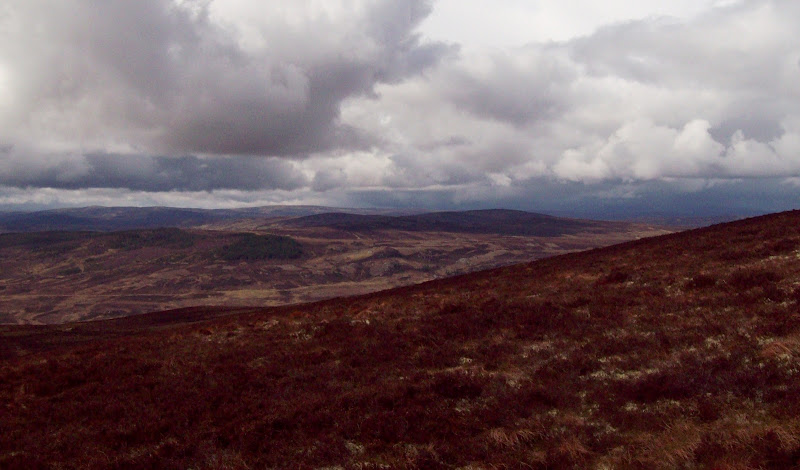 SW towards Carrbridge and Grantown: 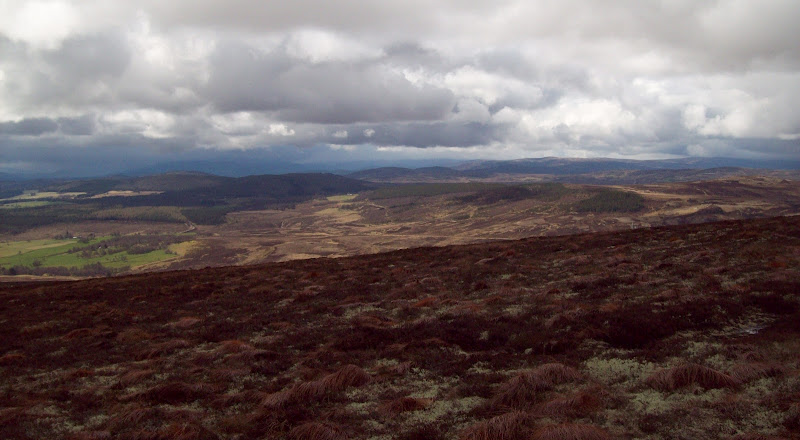 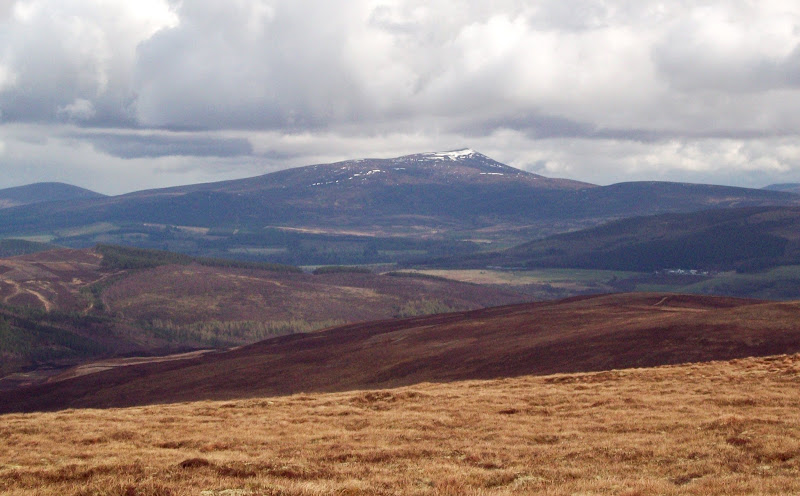 To make a circuit, I descended along the National Park boundary (nothing marked on the ground) and crossed more thick and damp heather to the pointy knoll of Sgorr Gaoith. A pleasant little cairn, but it has nothing on its namesake above Gleann Eanaich!

A short, steep descent down heather took me to a good vehicle track, although I had to climb a fence to get on this.

The track led easily back to the road and the car, but I wanted to explore the interesting rocky area nearby first. There is a cave called Huntly's Cave marked on the map - one of a couple in the area. There is info about the more popular one, about 4km SW here. This one was much less impressive, but I can only assume was used by the same Huntly. Anyway, it made an interesting diversion into a scenic little area. Getting to the cave itself was actually quite slippery, following a choked mini-gorge up across loose boulders. I climbed out onto higher ground to get back out, having another break on a rock. 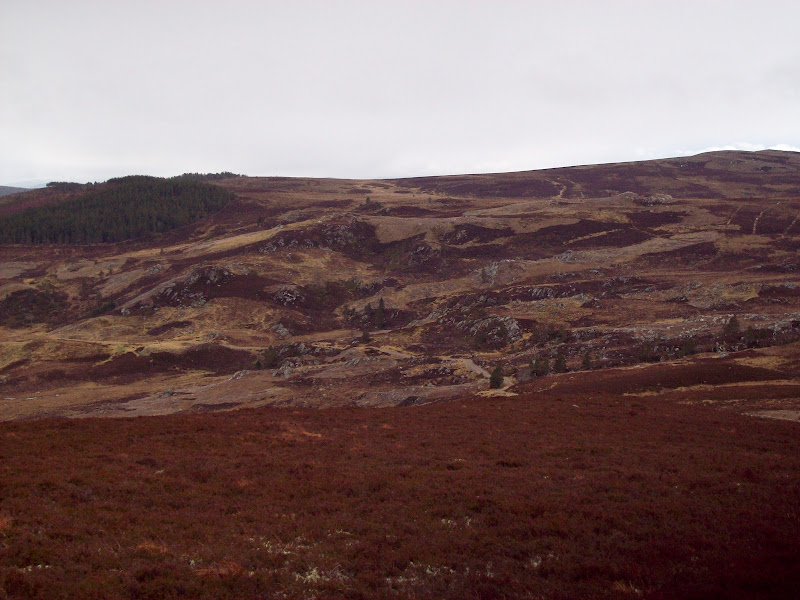 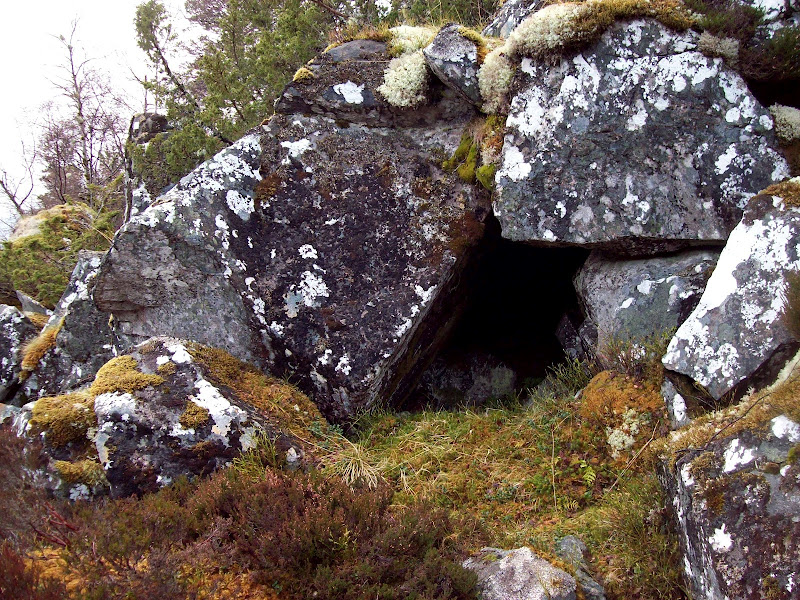 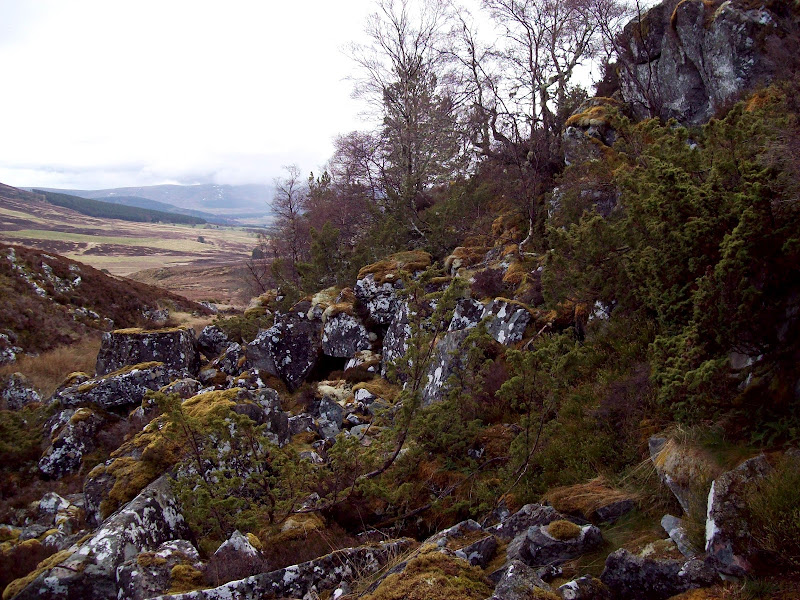 Interesting rough area around the cave: 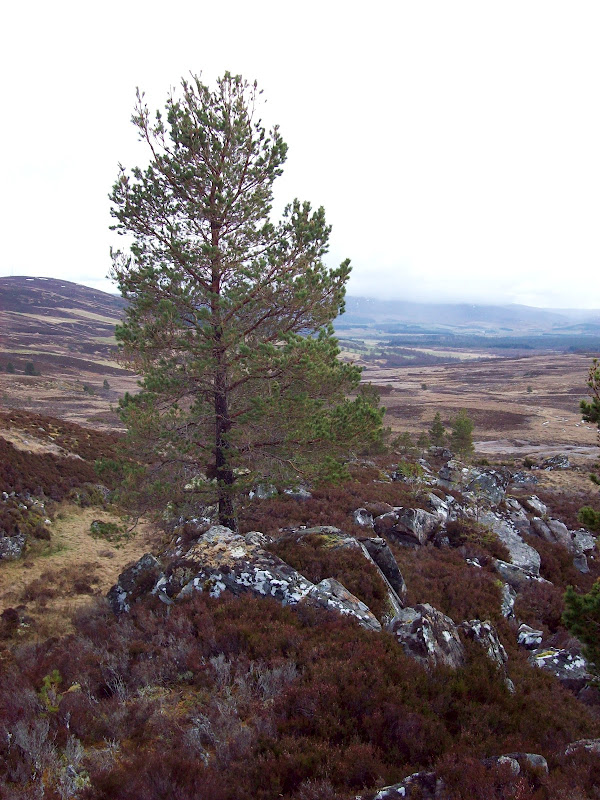 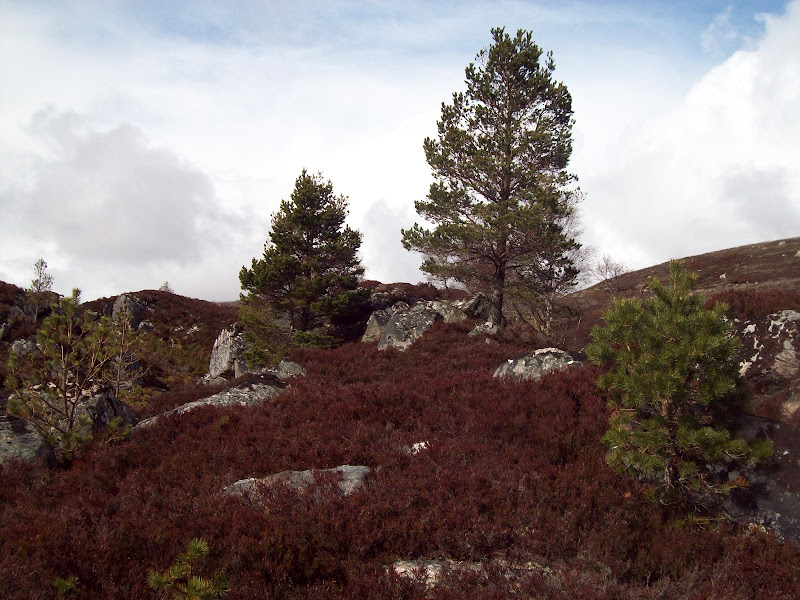 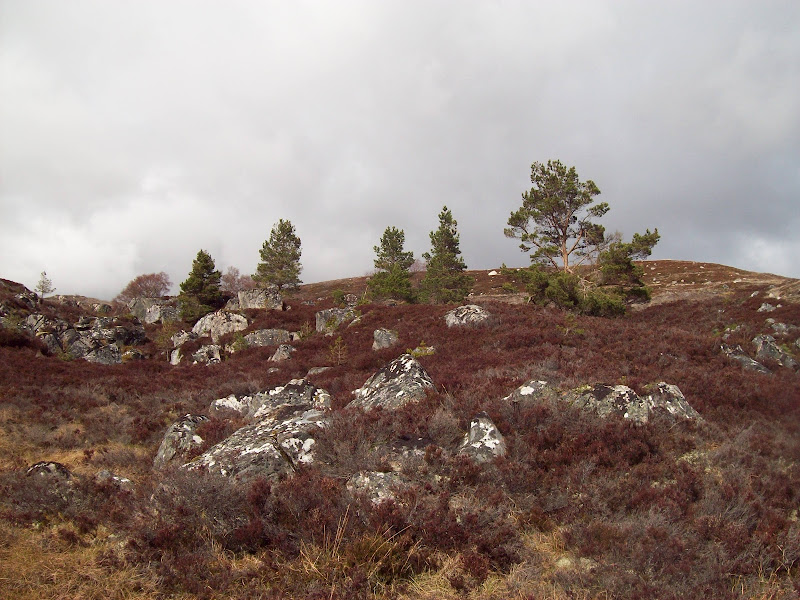 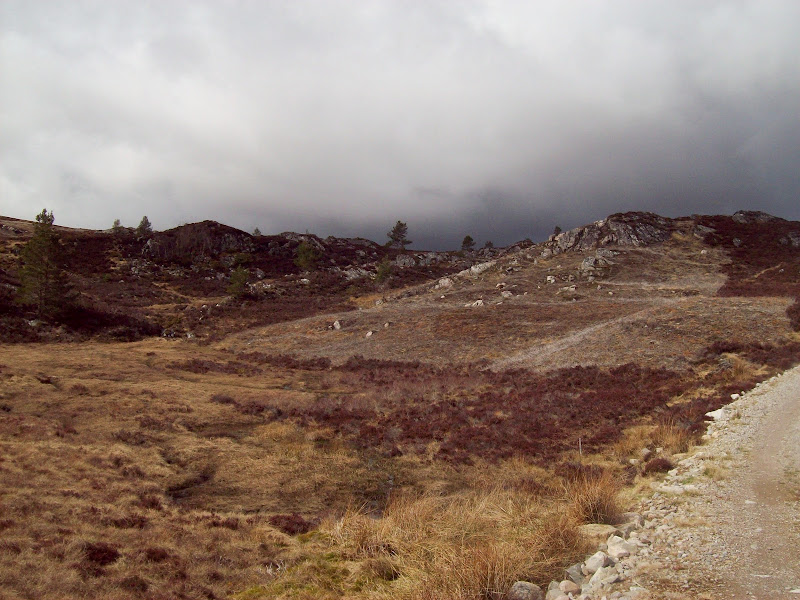 Back on the track, and it was an easy stroll back down to the road, where there was a much better parking area than I had used. Another 10 minutes stroll down the road took me back to the car, which I got to just as a very heavy shower started.

Sgor Gaoithe (not that one): 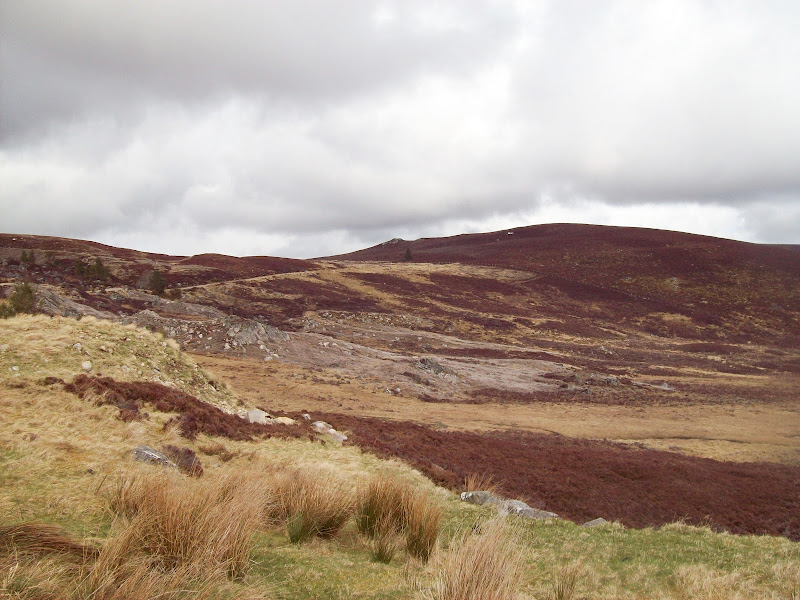 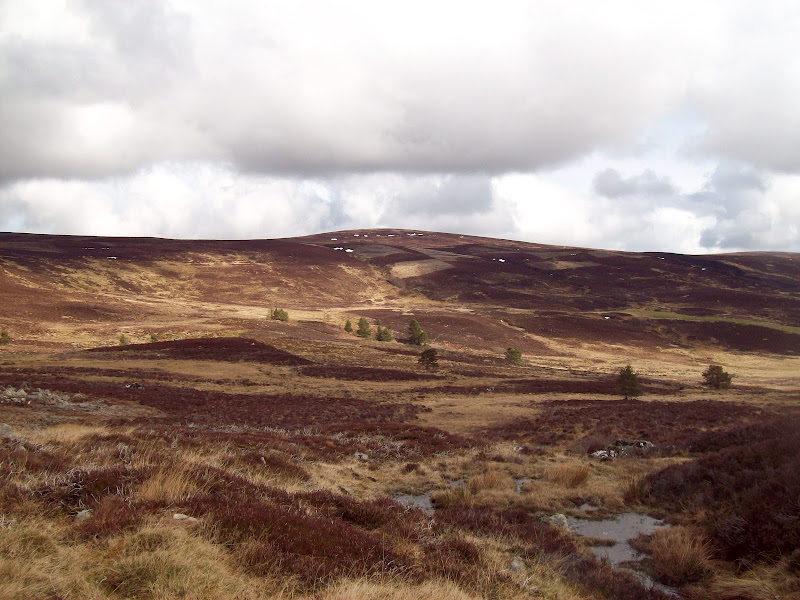 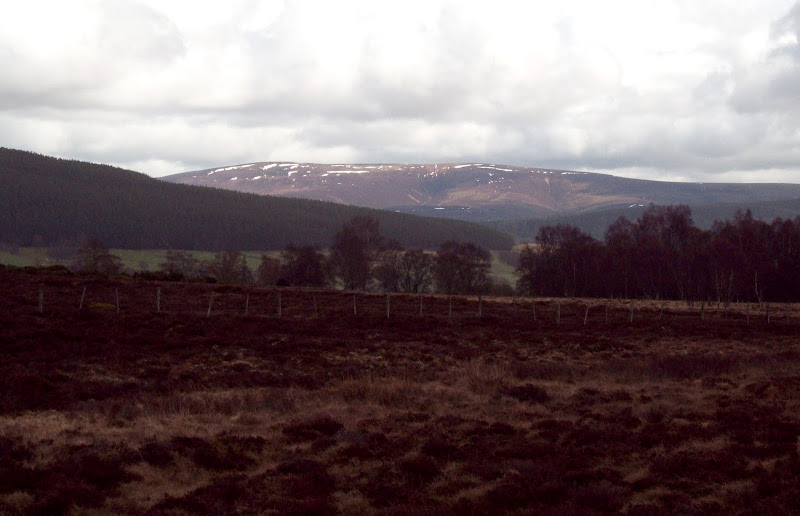 My wife called me and said that she'd headed down to Aviemore with a work colleague. I went straight down there and we had a nice early dinner at the Mountain Cafe. On the drive down, the cloud began to lift on the Gorms, with Bynack More in particular standing out with its new coat of snow.

Not a hill to drive long distances for, but well worth visiting if you are nearby. The sunshine more than made up for the previous day's drowning.

Re: A quickie - Carn na Loine

This is a great wee wander Malky, that cave has an interesting tale but what a miserable little place to have to live in fear for your life

I laughed at the thought of you striding across the hills in your wellies......most impressive, I always find that wellies seem to be just a half size too big every damn time