The North Face of Ben Nevis

The North Face of Ben Nevis

Having been up the Corbett Beinn Bhan a few days before and looked out over the Aonachs and the Ben it seemed like Winter was biting back. Almost unbelievable that a month before we were doing mountains in T-Shirts and shorts

.
Anyway I was desperate to get the axes and crampons out so we decided to have a look at the North Face of the Ben and see if anything was on.

We reached the North Face Carpark early and left the car at 07.20am. The weather was looking brilliant. Only a little cloud near the summit and blue skies everywhere. The snow on the Ben and the blue skies made it look fantastic Surprisingly the car park was empty and we hardly saw anyone until we reached the summit and started to head down the zig zags- we had the North Face to ourselves!! just below the CIC hut

We thought we would look at Tower Gully as we hoped there would be good old consolidated snow there. After around 1hr 40 we reached the bottom of the gully and started up. tower gully up there

There was more snow than we thought and certainly too much windslab and graupel. Along with the avalanche debris we decided to leave this for another day…. So for plan B, we were contemplating two options – CMD via the arête or up onto the Ben. We were undecided and headed for Coire Leis. The going was slow here as the bolder field was covering in snow and disappearing legs and feet was a frequent event!! However a little scramble and grade I ascent up the head of Coire Leis saw us at the end of the CMD arête and decision had to be made…. The views south were great – although the cloud had come in the visibility was superb and the cloud still above the summits.

We opted for a slog to the top of Britain and we arrived at the trig about midday to see the first of the visitors from Glen Nevis arrive (we did see two people making their way along the CMD arête earlier so may have been on summit earlier too) . There was also a tent near the Coire Leis where some brave people had camped out – see video!!!http://www.youtube.com/watch?v=n7OKviu9hhs&feature=relmfu
By now the blue skies were gone but the cloud was still well above the summit and views were great. We headed down the zig zags to the halfway lochan and from there cut back across pathless terrain to the main path to the North Face car park, arriving back at the car for about 15.00. It was a great day and although we did not get Tower Gully, the walk and weather were brilliant!! 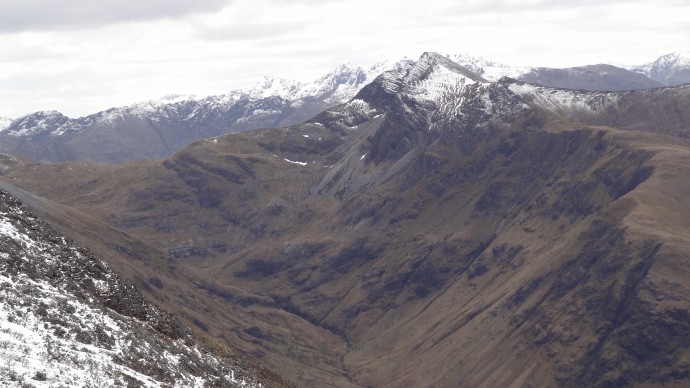