Team reduced to 2 plus Jake the dug this weekend, decided on a simple single hill.

Met Ian at the car park at Inverfyne and on the track for 07.45, Jake leading the way. Slight altercation with a grumpy toffee coo that took exception to Jake even though he was on a lead at the time. She decided to run past us to stand over her calf, three quarters of a ton of hair and horn can move quite fast let me tell you. 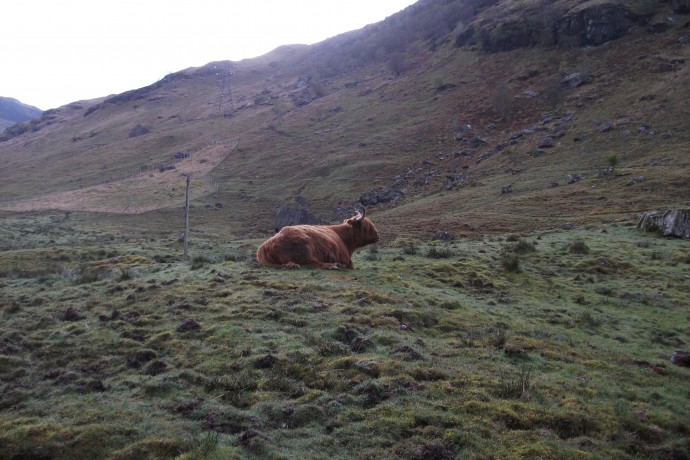 Get orf my land Long walk in but very scenic as Glen Fyne develops, most of it on a good tarmac road then a gravel track until Inverchorachan cottage; 81 minutes. Long and winding road - apologies to The Beatles 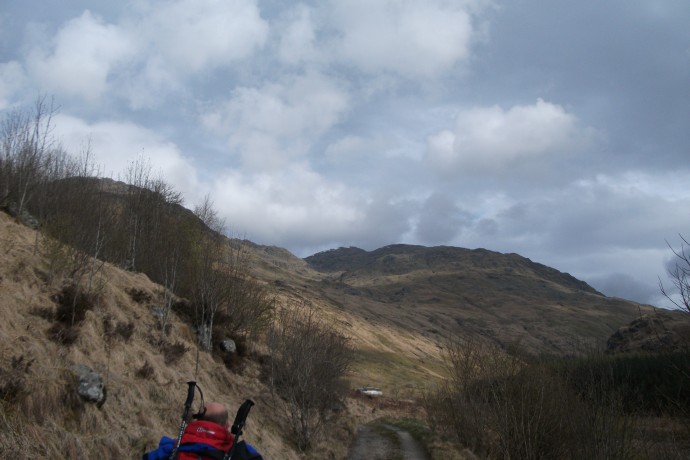 Good path up the bank of the stream, a little eroded in places with a couple of small scrambles. 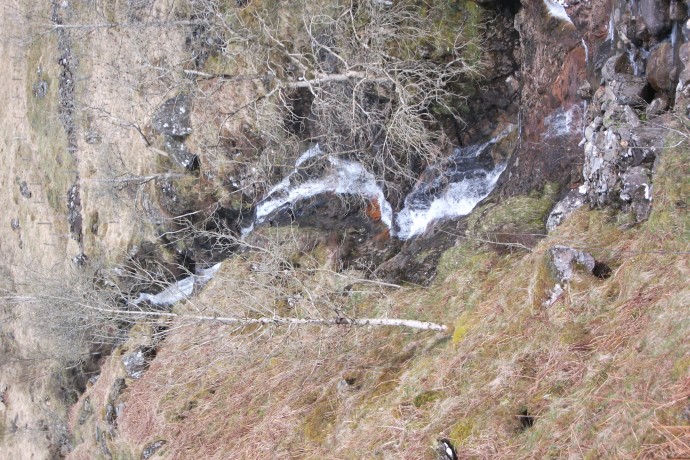 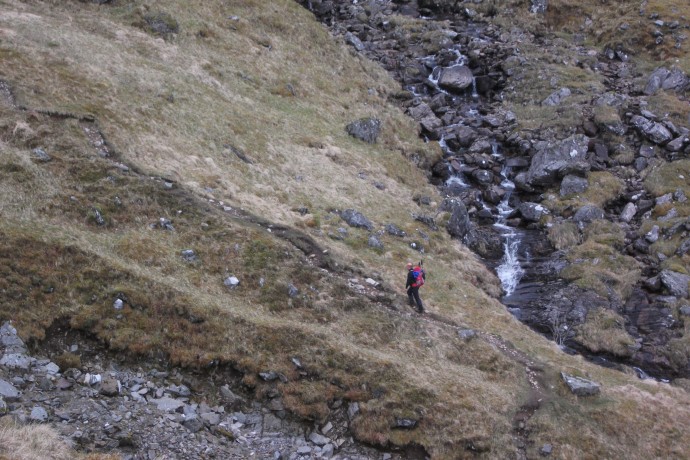 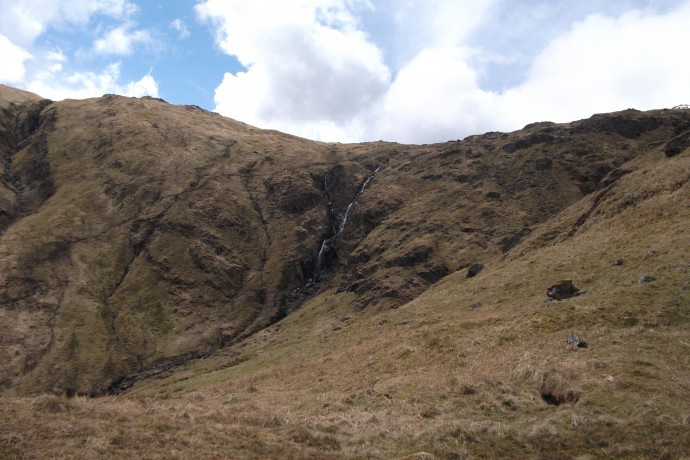 Route up by waterfall

Ian was having trouble maintaining grip with his lightweight boots on some of the rocky areas and went off on a detour. We met up again at the 700m plateau area by the head of Alt na Faing and followed the indistinct path to the base of the last ascent under the bealach. It was just a case of working your way upwards between the small crags. From the top we found a more direct path? to the summit up a gulley, but not for us - to near pension. The summit was shrouded in cloud which gradually lifted as we walked along the summit ridge path. Looking back to the bealach

The shape of the hill and gradients reminded me of a grassy version of the final pull up to Stob Ban, on a slightly smaller scale (and for the purists its opposite handed).
Summit reached in 3 hrs 40 mins as the cloud lifted and we ended up with a good all round view. Had lunch and debated returning via Newton Hill, following the track by the Merk burn through the forest and back via the west bank of the river Fyne. Decided not to as there was a sizable area of peat hags and many small pools which would have made for hard walking.

We had intended in following the WH route but came off the ridge too early and had to traverse eastwards above the waterfalls to gain the steep grassy slopes on the north side of the Alt na Faing. The descent was not much slower than the ascent, that is a measure of how steep the grass slopes are.

Had a short break at the bottom before the forced march out led by the old Black Watchman Ian (come on lad push it out, in through the nose out through the mouth, no slacking).
All was going well until the ambush by the wooly horned behemoths just after the sheepfold (phycological warfare there - never expect cows by a sheepfold). Six cows and calfs strung across the road with a couple of tough looking hangers on. Wellington said pick your ground for a battle, I said run away. So we gave them a wide berth up hill in their field, which was the worst bog of the day and not all of it peat.
84 minutes walk out with a total walk time of 7 hrs 35 mins.

Forgot to add we heard a cuckoo calling from the hazel tree woods, a little early I thought, a letter to Times is required as summer is on its way. 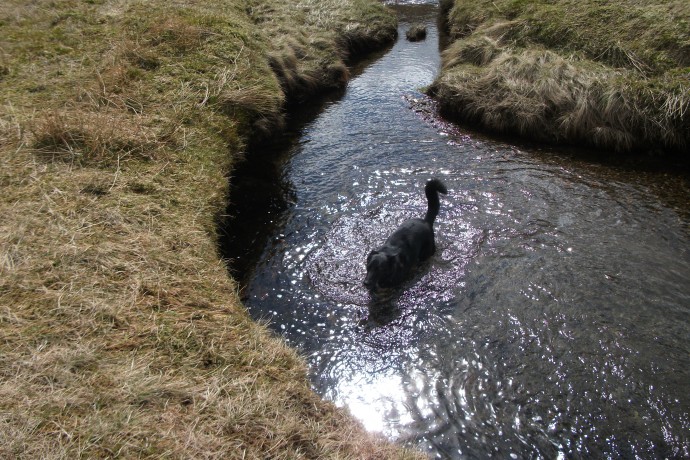 Jake takes a cooling bath, I was tempted 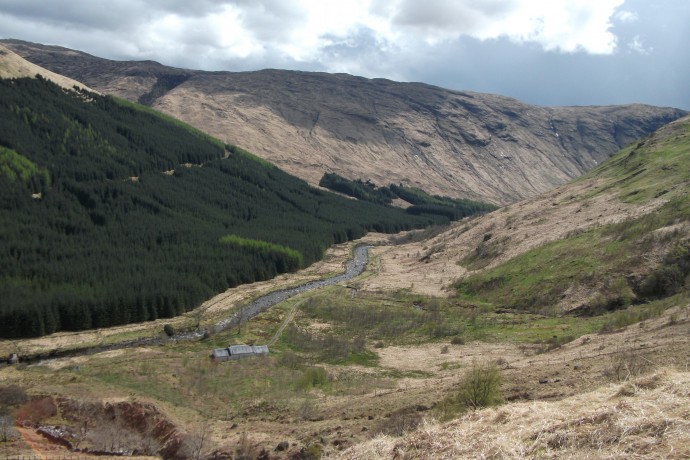 Aye the coos don't like dugs. Nice walk this and well done on the 50

I'm hoping to do this one soon. Looks good, although I might "cheat" a wee bit and cycle up as far as the cottage

Nice one Kev,well done on getting to 50,30 years is good going

That's one hill you pair have up on me and chaz

Johnny Corbett wrote:Aye the coos don't like dugs. Nice walk this and well done on the 50

Thanks Johnny, its taken a long time but cracked out 21 so far this year and no plans for stopping.

I'm hoping to do this one soon. Looks good, although I might "cheat" a wee bit and cycle up as far as the cottage

Thanks Banditman, the track is in good condition when the tarmac runs out but there is a rather large gate (2m high), deer fence and a very small kissing gate at the normal vehicular road end. The estate have provided a steel rail to secure your bike to but I can't see the burberry crowd getting this far out of civilisation.

pigeon wrote:Nice one Kev,well done on getting to 50,30 years is good going

That's one hill you pair have up on me and chaz

Pidge, we missed you as did Jake, he had to lumber along with the oldies. Only another 169.8 years to get them all in at that rate.

well done on the 50, but don`t know how your mate had a problem with the path ?

No way man,we'll take a few decades of that

A not too bad day by the looks of it

This hill found me in "couldn't be a****d" mood a few weeks back, so I gave up half way. I took the opportunity to visit the Fyne brewery on the return instead and invested in some Fyne Ales. And Fyne they are. Can't say I enjoyed the walk in that much, but a re-visit to the brewery when I do go back will be incentive enough for me to return

Maybe it's just me, but I took one look at the coos "field" and decided I'd chance my luck rather than walk through that

So I walked right through the coos when I encountered them and had no problems.

This is a great hill for your 50th. Well done to you. I was sure glad I had my bike for the return trip-I was knackered

The pup looked like he was having a ball too!

tomyboy73 wrote:well done on the 50, but don`t know how your mate had a problem with the path ?

Thanks Tomy, Ian had no real problem with the path as such but on two of the small scrambles he could gain no purchase at all. So he decided to go over the top of them and after gaining height decided just to carry on upwards.

No way man,we'll take a few decades of that

The walking has taken a few decades off me, I feel like a 30 year old only the wife says I can't have one.

PeteR wrote:Well done on the 50

A not too bad day by the looks of it

Thanks PeteR; there are worse approach walks, we had promised ourselves to look in at the shop on the way out but I was late for a previous in Falkirk and turning up with a boot load of beer would have definitely caused me pain in the nether regions.
Normally the cows wouldn't faze us having dealt with bovine blood relatives with calves twice in Glen Lochay and at the start of An Caisteal this year. We stayed on the road on the way in even after the fire power demonstration by the beefy bullet but the way out was slightly different as it would have been like running a gauntlet. As the wall/fence alongside the road that separates the sheep fields from the road is electrified the avoidance route is into the cow field. With my Elf & Safety head on the dynamic risk assessment said be gracious and give way, as the only one who could outrun them was Jake.

2dalmatians wrote:This is a great hill for your 50th. Well done to you. I was sure glad I had my bike for the return trip-I was knackered

The pup looked like he was having a ball too!

Thanks 2dalmations; I liked the hill in spite of the access/egress. The pup had a good time and Jake the Dug also.