a veiw to a hill

a veiw to a hill


after waiting for a weather window for this big route since my last outing i set off friday night from preston at 6.30 with a veiw to arriving at the drovers inn before closing time, 2 pints of deuchars and £ 8.00 lighter saw me soundly asleep by the bridge of orchy by 12.30 pm;
saturday am 8.14 am on the station at orchy for the train to corrour with a few other brave souls and here comes the overnight sleeper from london, so we all pile onto the back carriage as usual where a nervous guard asks who booked us all on the train , thats a new one on me but because ive only caught this train in winter when its quieter, anyhow it was quite full in the one carriage so its one to remember for summertime.

folowed track and headed ENE along loch ossian to the outflow of the river ossian and stopped for a break by the bridge, there are some large stones here which make a nice seat with a veiw down the loch too, this is a pic from last june with the broom in flower as its better than the one i took last week !! you clever ones will have noticed this already crossed bridge over river ossian and turned right and followed path by river north to cross over and around woodland on the west side most of which has been felled recently and reached the bridge over usige labhair where i followed path up the glen to below ben alders west ridge, climbing up to meet the path coming in from bealach dubh around 650 mtrs. headed up west ridge staying close to the edge of rocks above coire chomhlain with good veiws opening up behind me to beinn eibhinn etc, reached about 1050 mtrs and the weather started to come in every 20 minutes or so with heavy snow and hail showers with terrific increases in windspeed temporarily reducing visibility to zero, so rather than wait for another shower i stopped a while and donned full winter mits, hat and goggles and set compass for summit, had to break trail here through new powder snow which proved tough going, crossed plateau heading east in a sea of white 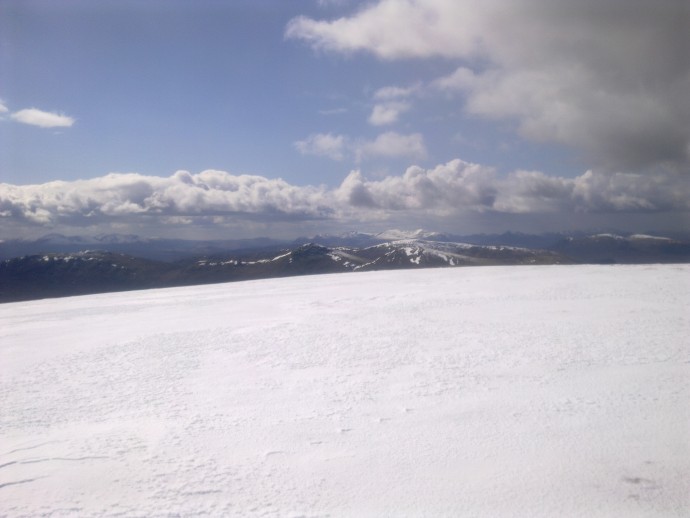 arrived just north of summit near the edge of the east face and followed edge and arrived with much releif on ben alders summit with great panorama all around, fantastic not a soul in sight to spoil the veiw ! good veiw down to lochan and accross to ben bheoil my next objective and so i headed off around rim of choire garbh passing between the high lochan which was snow covered , care needed here when snow covered with water on one side / cliffs on the the other !! just after point 1104 mtrs followed east a short way and descended SE to bealach below sron coire na h-lolaire for lunch 2.30 pm, where i sat watching showers breaking out over perthshire up onto north west shoulder of sron and down and up again to summit of ben bheiol which proved fairly straighforward, 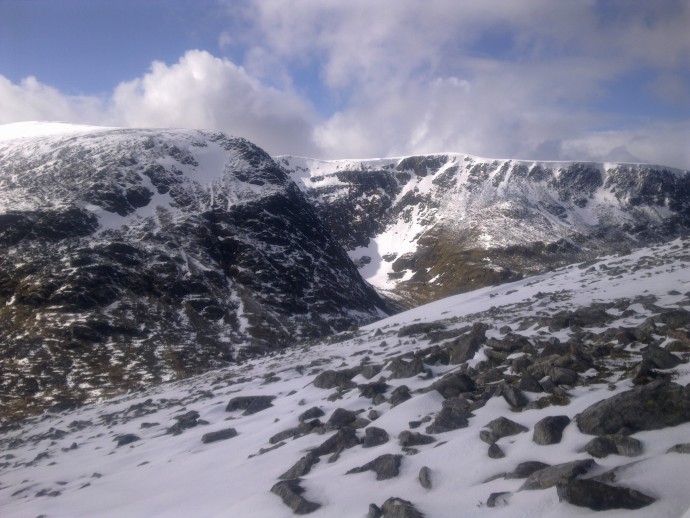 headed back over the sron and down to bhealaich bheithe and south down the stream to lonely ben alder cottage and set up camp for the night [ you may read its supposed to be haunted by the ghost of a gamekeeper ] not the guy emerging on the right of bothy thats stevie from glasgow ! lovely wild place here and great to camp if like me you sleep better alone, met glasgow couple in the bothy who had walked in from the south a few days previous just to enjoy the peace and solitude of this magical place, spent a great few hours by the fire sharing memories of many a mountain day before i retired back over the stepping stones to me wee tent and a good nights [ ghost free sleep ] 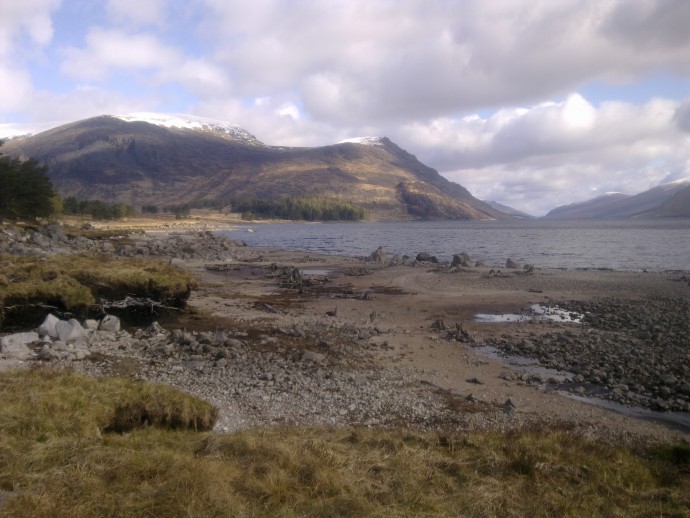 followed lochside to bridge over cam chriochan and headed due west up onto ridge of meall na meoig 868 mtrs , rounded north side of lochan and climbed easy snow gully up onto corbett summit, great veiws from this peak looking to black mount, and ben nevis summit clear of cloud followed ups and downs south along ridge to point 711 mtrs and descended down to meet track at footbridge over the allt eigheach, slept like a log for an hour or so by the river and an then easy stroll back to the road and rannoch station for the 18.37 train back to civilisation [ oh dear naeer mind ill be back soon ] 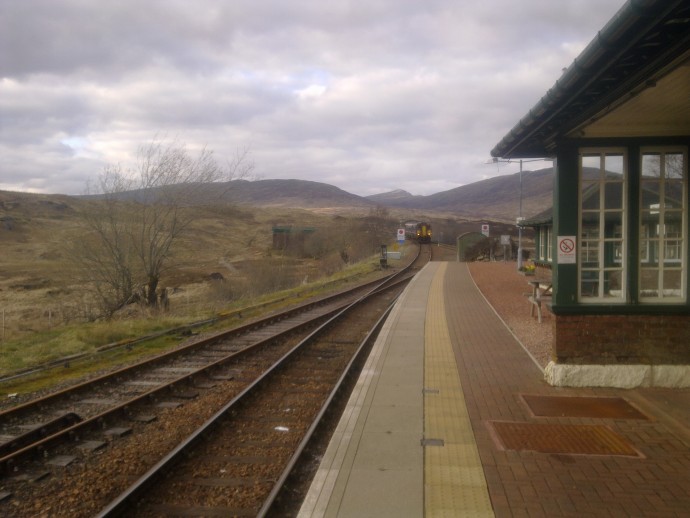 Re: a veiw to a hill

One of my fav parts of the world this!!

Re: a veiw to a hill