Todays walk took myself and buddy Colin to the Lowther hills for a walk bagging a string of hills starting at Elvanfoot and finishing in the crawford arms for a couple of well earned pints. The joys of small town Scotland and public transport were experienced also!
Our route was to start just north of the churchyard at Elvanfoot and we headed up Watchman Hill on our way to the first donald of the day Lousie Wood Law. The views of the motorway corridor were good and a couple of trains passed as we were climbing. It was my first noisy walk up a hill although the drone of traffic faded after we got farther from the road. The feeling of being in the hills was supported by the 'tuk tuk' of grouse and the view toward tinto in the distance. Tinto and a red grouse.

As we came to the top of LWL we could see Daer reservior, our route from last monday. The sun was shining and the forecast for a good day was true so far. We stopped briefly at the trig point and set off towards Dun Law. The path was faint and we strayed through the heather alarming a few red grouse along the way. Once we had reached the dip between blacklaw and white law we met a gamekeeper who politely asked us to stick to tracks.

@politely! We heeded his advice and made the top of Dun Law quickly and decided to stop for lunch on the lea side of the hill as we had a late start at 10am. Chicken noodle soup and a ham roll for me and to be honest I was so busy scoffing mines I can't recall what Colin had! He definately had a mars duo for dessert though!

(colins standard fare)
After lunch we were met with this daunting sight... Thankfully it wasn't as steep as it looked and we were making good time onto Peden head and Green Lowther. The top of Green Lowther is a strange place indeed. Usually we expect isolation and fantasticly barron landscapes to greet us at 732m up! No not on Green Lowther, a bt man and his van, a ginormous radio mast and a bloody tarmac'ed road! (not too kind on the old soles) It really is quite a surreal place. So strange that it had an effect on Colin... 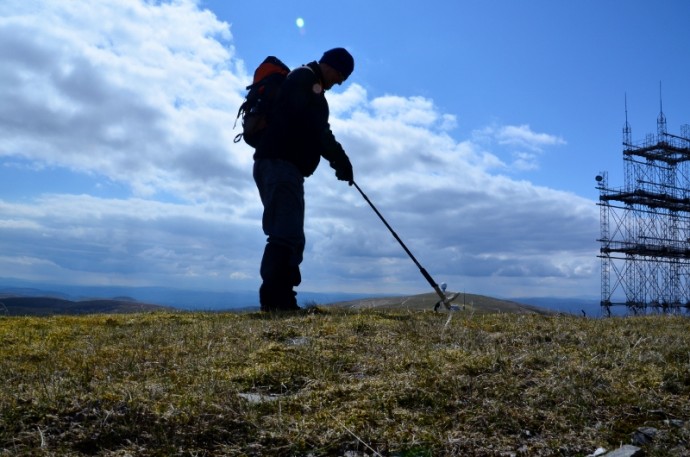 The road was a long walk onto Lowther Hill and the 'golf ball'/radar and I had to take a few pictures along the way. After that long march Colin was not impressed when I suggested we did East Mount Lowther too. He'd seen wanlockhead and was not for going a couple of km out his way to tick off a hill. I was though! I set of jogging down the track and soon picked up speed until I was almost falling over! Thankfully the steep slope evened out and I gathered my feet from under me. I caught my breath and studied the viewpoint on the top. The solway was visible and according to the viewpoint jura is to although too much haze spoilt it for me. Amazing how far you can hope to see on a hill. Anyways I set off back to meet Colin where we followed the SUW into Wanlockhead. We had a coffee and Bacon Roll in the tea room at the mining museum, there was no one else there but its open from 11:30am to 4:30pm every day til the end of the summer and the chap who served us assured us that the pub in Leadhills was open too! We set off walking the short distance to LH and along the road we spotted a little railway line that runs from WH to LH but unfortunatley for us only on weekends.

Dissapointed we thought of a cold pint and kept going. Upon reaching LH we found the pub to be closed.

Not good. Colin was very sad. We waited 50 mins on the bus to take us to Crawford where we would try our luck at the crawford arms. The bus journey was swift and the crawford arms was open and welcoming.

Two pints were necked as we waited on our bus back to Moffat.

A good days walking although plenty time was wasted waiting around for busses and connecting busses. But hey ho, we couldn't have had two pints without them. The first look at the radar.

Nice round of Donalds there Garry. Looking at where these hills lie it looks like any circular route involves Tarmac as they are squashed between two roads. Will probably look to do this round next winter - looks like it could be fun in the snow!
Cheers

Yep plenty of snow markers so it would be easily navigable in the worst weather. Parking at Crawford and bussing to wanlockhead might be an option mate.