This was a case of bad planning right from the start. First of all, I (unusually) hadn't made a proper assessment of how long the route would take. Secondly, I got up at 6:30, a tad late given that I'd over three hours' driving to get to the trail head. Thirdly, I somehow managed only to leave Glasgow at about 10:15, thanks to plenty of no doubt worthwhile distractions.

At any rate, in spite of some inspired overtaking manoeuvres en route, it was 1:45 by the time I mounted The Tank at the far end of Loch Arkaig, having lunched on arrival. NB The Tank is my old flatmates' name for my rather portly old-school mountain bike. As a teenager I saved every last bit of pocket, Christmas and birthday money for over two years to get it. That's now 20 years ago and I've since had to replace practically every bit of it, minus the frame, headset and front derailleur. It currently has road tyres which tends to add a frisson of interest to these slightly off-road approaches.

Further bad news was that in spite of having tramped over a beautiful thick winter coat covering everything above 800m in the Grey Corries the previous weekend and careful MWIS-watching in the interim, the winter conditions which I'd been hoping for were clearly not in evidence. I dimly recalled Martin Moran's explanation of the general dearth of such in this part of the world. On the bright side, although the light was initially rather flat, Sgurr na Ciche and its neighbours were determinedly free of cloud, promising the stunning views down Loch Nevis, across Knoydart and over to Eigg, Rum and Skye for which this ridge is, as it was to turn out, rightly renowned. (The SMC guide, with understatement that characteristically more than borders on the unpoetic, remarks, "It is worth waiting for a clear day.")

The forest track turned out to be in pretty good nick, albeit rather undulating, and it wasn't long before I was struggling through pine thickets for a suitable hitching-post for my trusty steed. I'd decided to do the circuit clockwise rather than in the anticlockwise direction generally described: firstly, this would mean taking the potentially trickiest section - the gully leading up to Feadan na Ciche - in ascent rather than descent; secondly, while I enjoy long walks in - always a good warm-up - I detest long walks out; thirdly, always a good idea to keep the prevailing winds at your back in the high places.

The ascent to the beginning of the gully was a pleasant enough slog, particularly once Loch Nevis and, beyond it, the flat cragginess of Eigg came into view. The gully itself occasioned some minor scrambling on alternate sides of a stream, sufficiently distracting to result in what felt like a very quick arrival at the bealach. From here a clear path led without difficulties to the summit, the going made even easier by first depositing my rucksack in the lee of what must surely be Scotland's most Sisyphean dry stone dyke.

The views commanded by this mountain are as spectacular as the views towards it: Knoydart, Morar and the western seaboard infinitely mutable under restless sky and sun; the in-shore hills and Loch Quoich reassuringly stolid by comparison. I could happily have stayed here for hours watching the play of light and cloud. 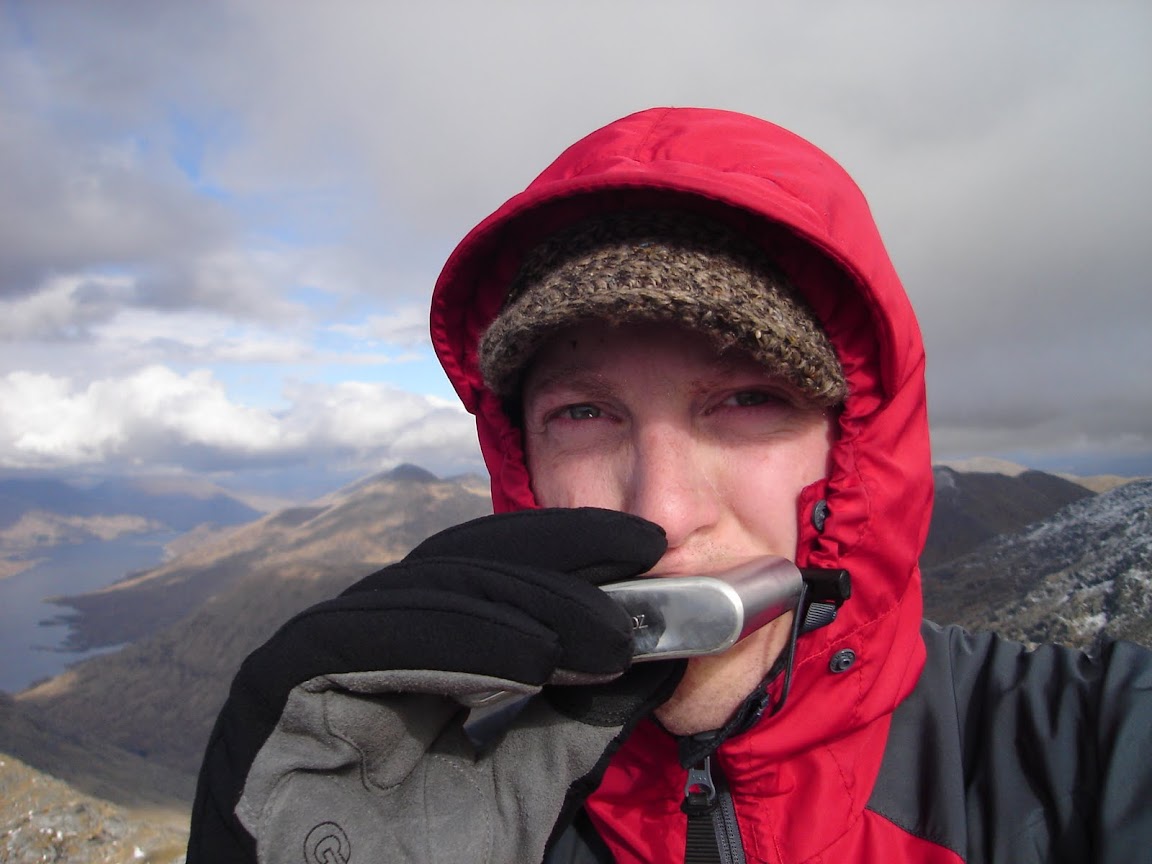 Toasting the previous day's birth of my hillwalking (and Munroist) friend Derek's second baby, Rachel Skye Petrie, with a bit of the Old Pulteney, in sight of the isle of her middle name 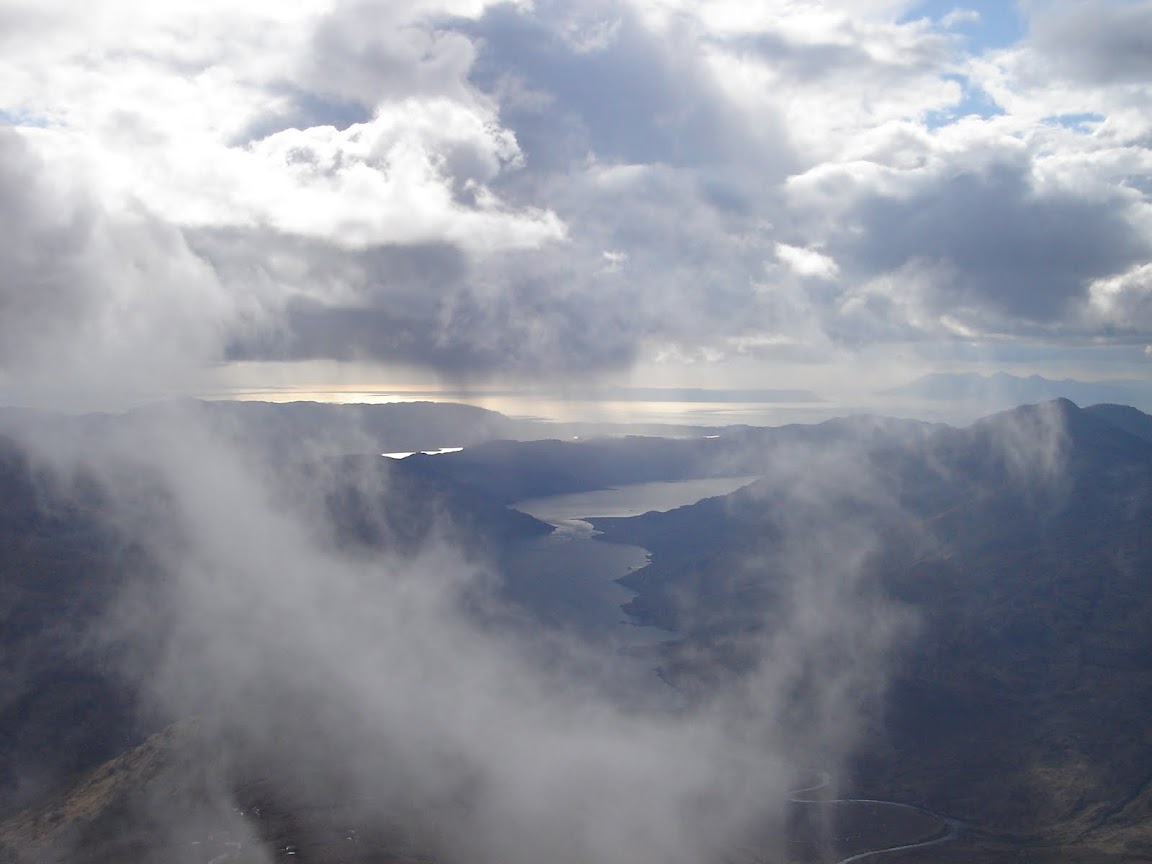 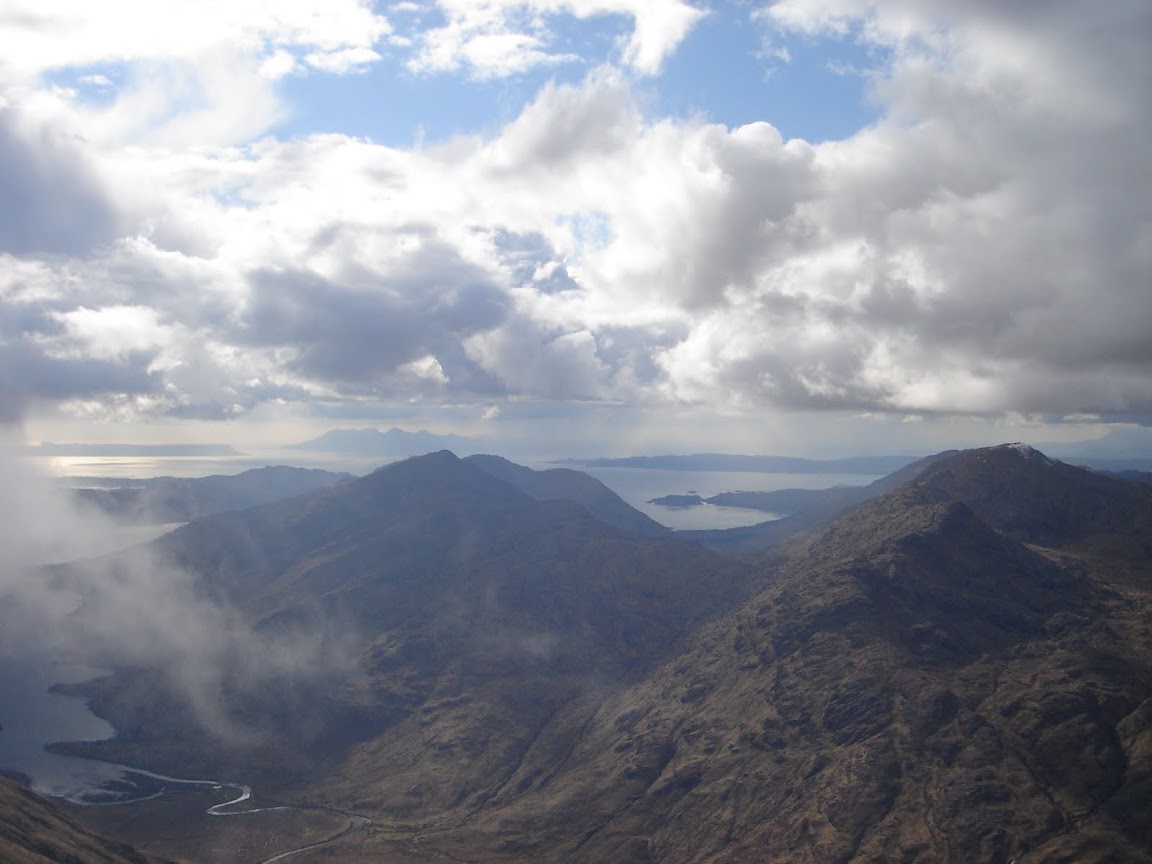 The late start had meant that the trip thus far had been shot through with a sense of hurriedness: I knew it was a long route and that I was risking finishing in darkness. However, the scene recalled me to my senses. What is the point of rushing up and down from these high places? If we get to the point of being too hurried, tired or cold to stop and allow awe and wonder their due, something has surely gone wrong. 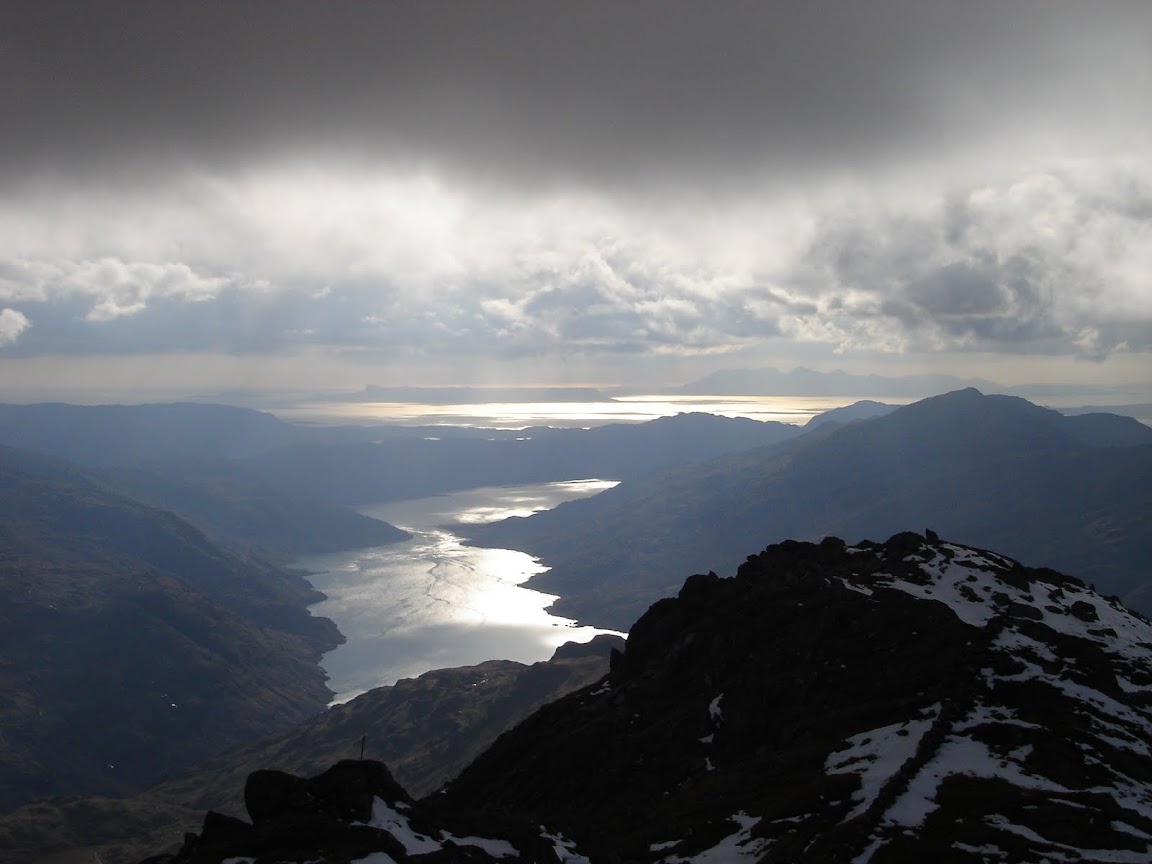 Sunstreams over Loch Nevis and Eigg

The onward ridge walk wasn't short on either awe or wonder as evening sunlight took command of the hills. There were patches of spring snow on an undulating, meandering crest of dyke, path and the odd stout pinnacle. Meanwhile every backward glance revealed a new lightscape. 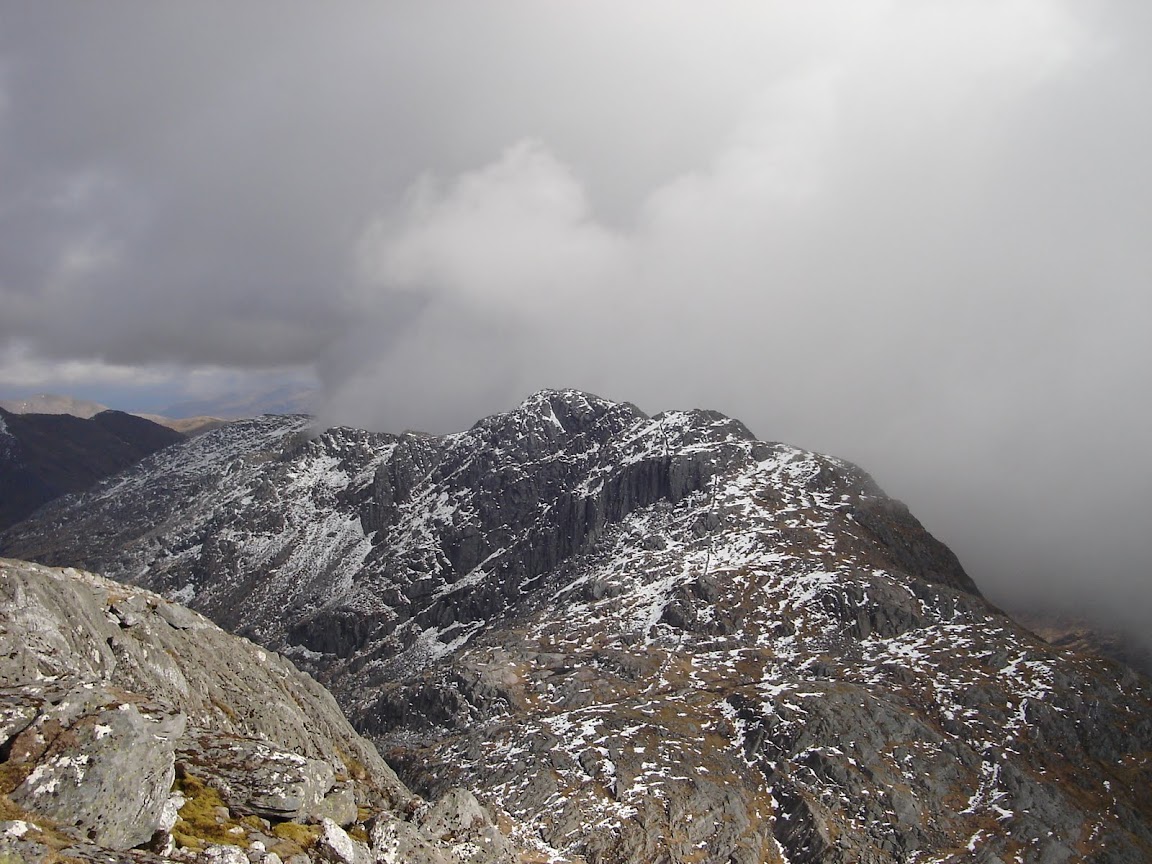 The ridge (and the dyke) stretching ahead over Garbh Chioch Mhor 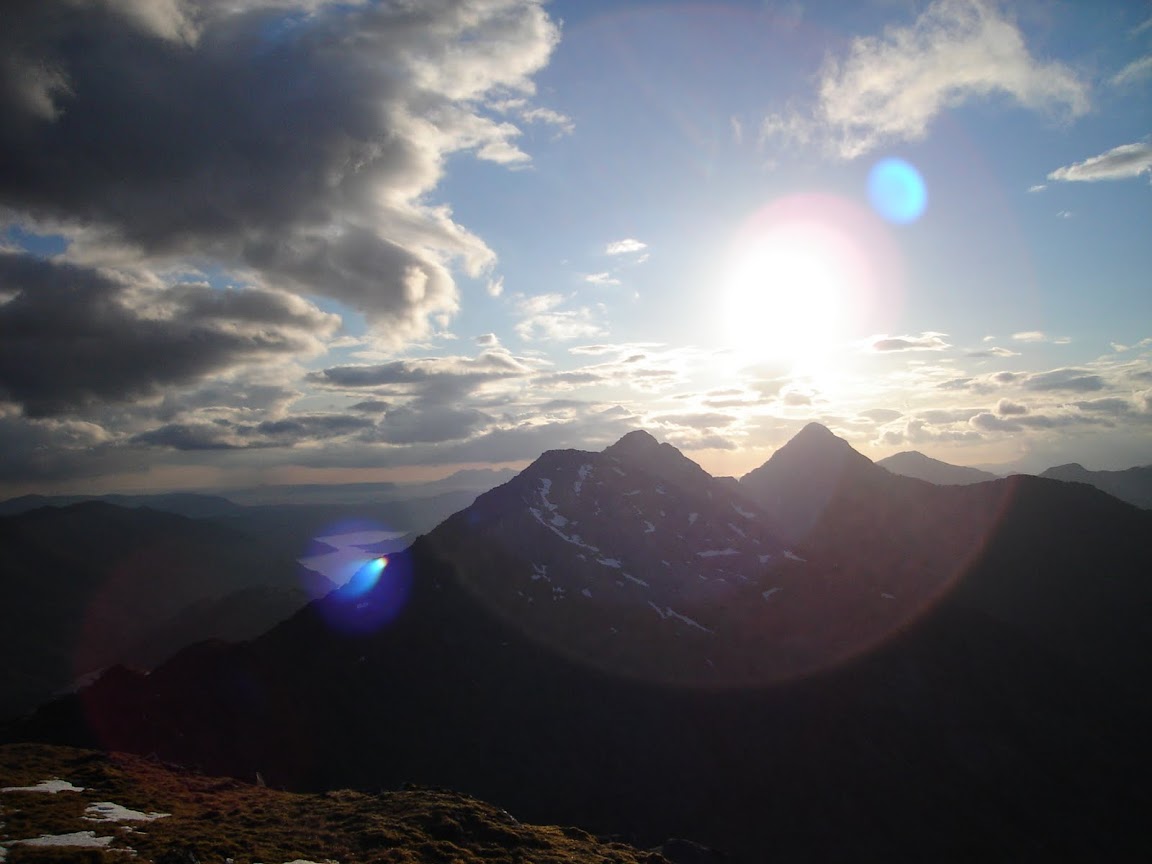 Pointy Breast Mountain lives up to its name

I'm not quite sure what time I reached the summit of Sgurr nan Coireachan, but it was certainly later than recommended. The compensation of course was sunset from the ridge, a rare privilege reserved for the disorganised. 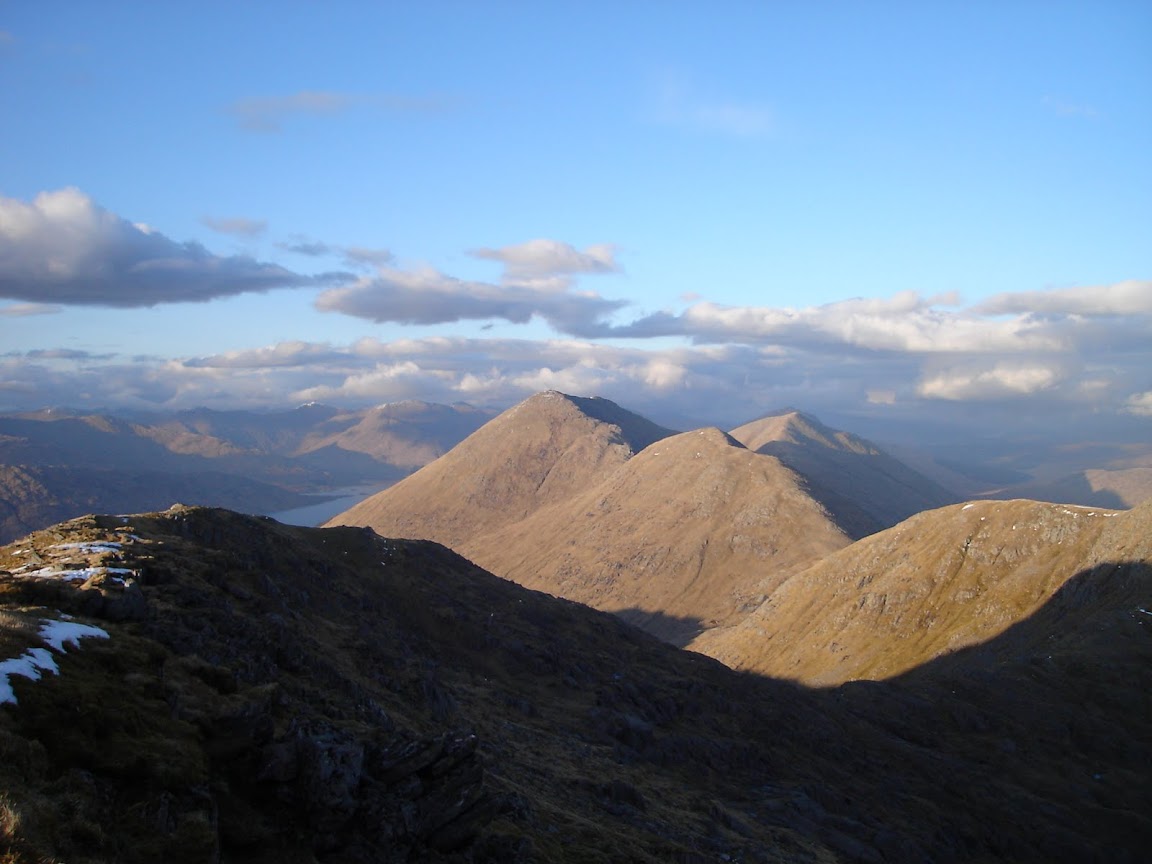 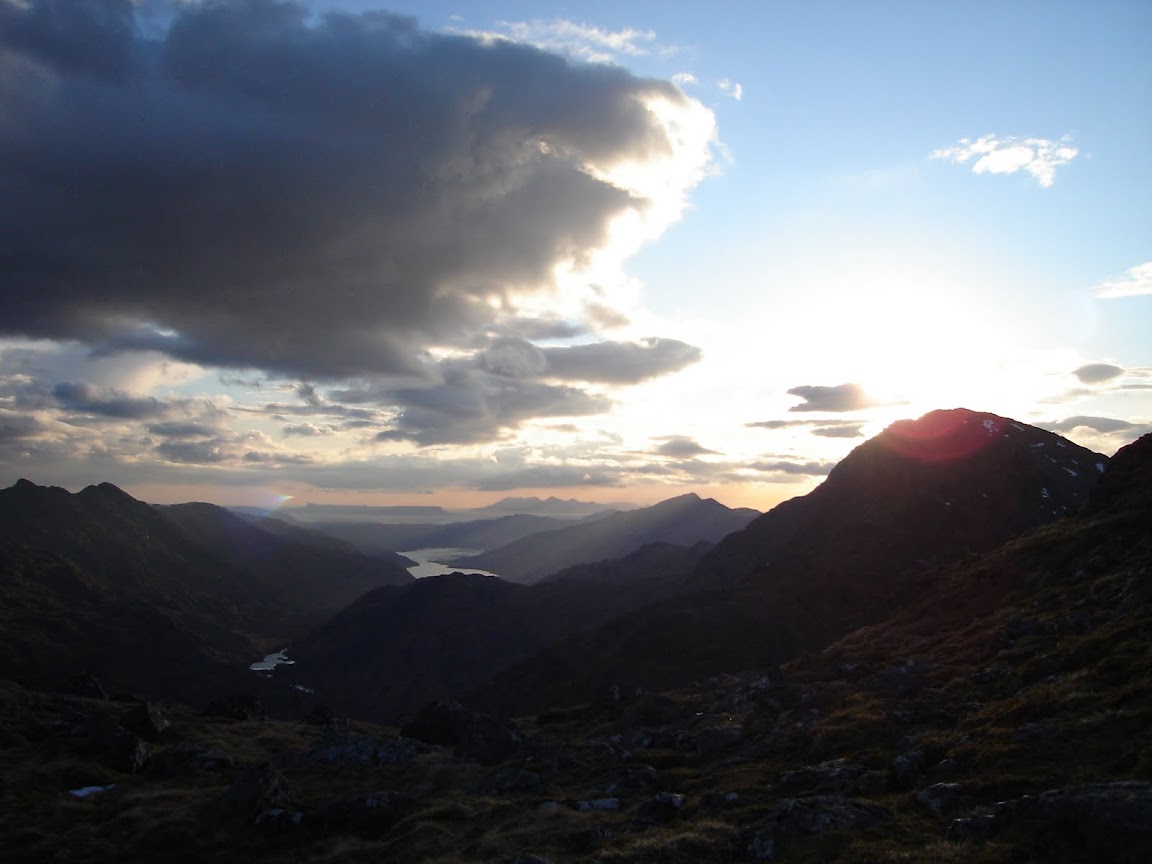 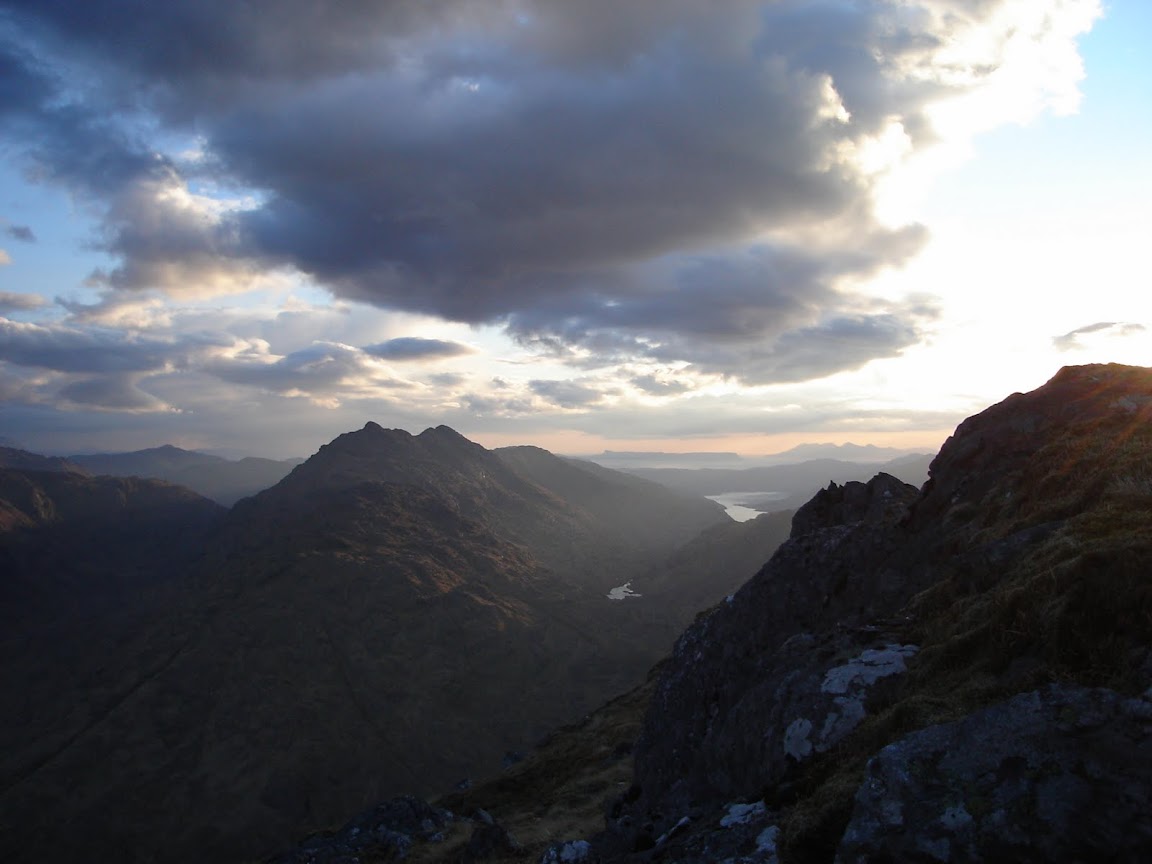 The descent back to the bike was unrelenting but fairly quick. With dark falling in earnest it was now time to get my head down and make tracks. There were a few unexpected jolts on the ride home given that it was after 9 by the time I saddled up. I decided to avoid the headtorch option as this would involve riding more slowly, instead opting for the what-you-don't-know-can't-hurt-you strategy. Fortunately my tyres didn't pay too heavily and, barring a momentary electrocution of terror on rounding a corner to see a black lion-shaped animal ahead of me (it turned out to be a huge stag with its head in the wrong position) I made it back to the car safe and sound at quarter to ten, now almost in pitch darkness.

Only the kebab shop was open by the time I got into Fort William, but what a day.

P.S. Lodgings at the Blackwater Hostel, Kinlochleven, are highly recommended!

SnC3.gpx Open full screen  NB: Walkhighlands is not responsible for the accuracy of gpx files in users posts

Thats a craking report AdamA and some of the best pics I've seen in a while. Dont know if I would have been as calm as you were coming across a Stag at night like that. For sure I would have been over the handle bars head first!!

adamarchie wrote:If we get to the point of being too hurried, tired or cold to stop and allow awe and wonder their due, something has surely gone wrong.

Well said, and you got some superb views and photos to make it all worthwhile - brilliant!

I enjoyed your report thank you, especially the pictures. It took me back to what was one of my finest and most enjoyable days. We did the circuit the conventional way and ended up in the dark at the end of a long walk out. Happy memories.

haha nice one i enjoyed that ..Sgurr na Ciche and Gleann Deas Airidh my favourite place

Fantastic report - you have a lovely style of prose and those photos are lush.

Great to see this place again was november i was up, seems so long ago, great photo's! The drystane wall is impressive, made me want to do a course to see how hard it is, stage one tommorrow, hoping its gonna be on the level though!
Cracking report enjoyed reading it!

Is it better to cycle through the forest than past Glendessary Lodge and to Upper Glendessary? Can you get further?

Lindsay, tis indeed better to go through the forest as you can get further by bike that way. Are you planning on going soon?

adamarchie wrote:Lindsay, tis indeed better to go through the forest as you can get further by bike that way. Are you planning on going soon?

adamarchie wrote:Lindsay, tis indeed better to go through the forest as you can get further by bike that way. Are you planning on going soon?

Slightly jealous! Fingers crossed for good weather and that you get those views. Of course, another option would be to walk/cycle in with tents. Some friends of mine did that recently and had a good time. In that case you'd be better off on the non-forest track. Have a good one!