ben nevis.gpx Open full screen  NB: Walkhighlands is not responsible for the accuracy of gpx files in users posts

50th & 51st Munros so picked something special, forecast didn't look too bad but it started raining at 10am and let up once for 5mins around 5pm. Also cloudy so didn't get any views, reluctant to risk camera in the wet anyway. Amazing day though

Left car park just before 9 (3 quid for parking), over wobbly bridge and onto path along river. Took a left alongside stone wall then followed mountain track cut into side of hill. This path is well maintained, guide says you can accidentally head up red burn but it's easy to see which is the intended path. 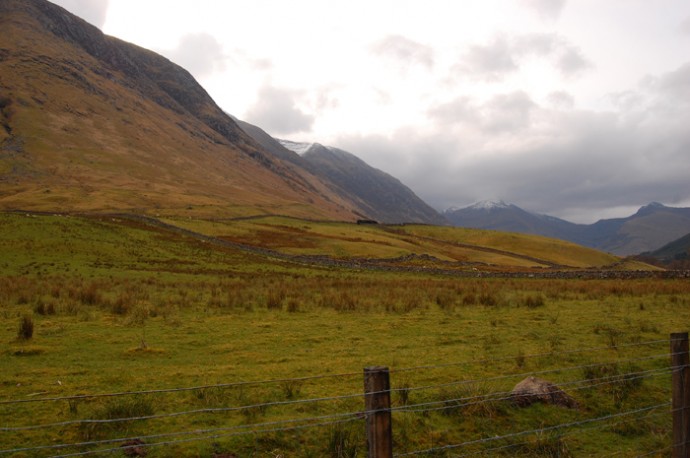 Bit of snow higher up, had brought crampons & axe just in case but didn't think I'd need them. Rain on now so camera stayed in its bag, this bag wasn't waterproof so I wrapped it in a freezer bag to keep rain out. Had route on GPS so left mountain track to go round for cmd ascent, GPS sent me on rough initial route but there's a proper path leaving the mountain track so I joined this. Had met 3 other walkers who continued to slog upwards as I departed for an easy walk round the back of the Ben

Looked like a grassy hill till I turned the corner and saw cmd and North Face: Path rocky in places, I did the vanilla route to CIC hut then up, but should have ascended cmd ridge earlier - the snow on it is hard going on steep ascent and there's less snow at the start of ridge. Looking over to Arete, clouds higher up so visibility would be a problem: Rocky route up, snow was soft further up but it gets knee deep and covers wet grass in places so was treacherous underfoot. Found a level boulder so stood on it to put crampons on and felt more confident, they stayed on till snowline on descent of Nevis. 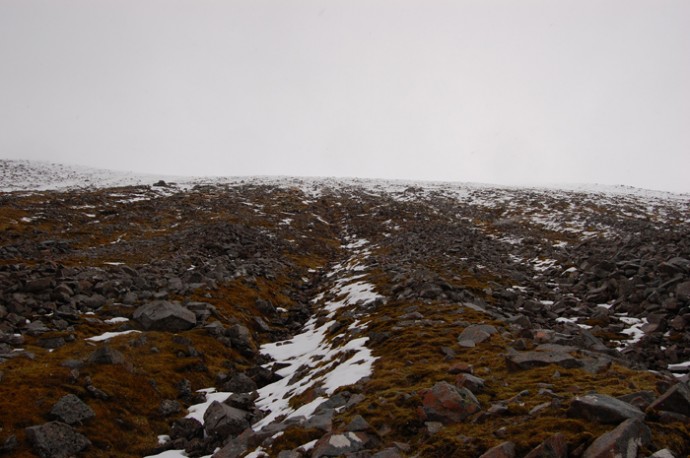 Snow getting a bit icier further up, was tough going on steep ascent. Visibility also deteriorated so it's a shock when you suddenly get on to narrow ridge, careful not to keep going over cornice on other side

Continued on till I reached a cairn, assumed to be cmd, then down to arete. No visibility but easy to find route (plus GPS for backup). Started on arete, wasn't too scary as I couldn't see down or how much was ahead: Descending below cloud line, quite a drop: 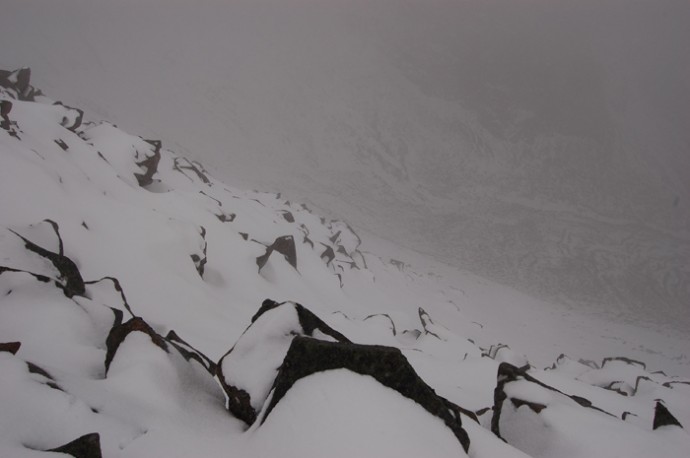 Bit of snow on the ridge, made some bits easier and others trickier with crampons. Could bypass to either side but was concerned snow was soft and wouldn't hold. No real problems though, just a bit scary. Then the cloud cleared and rest of the arete suddenly came into view, leading up to the Ben - awesome & dramatic. So risked wet camera again 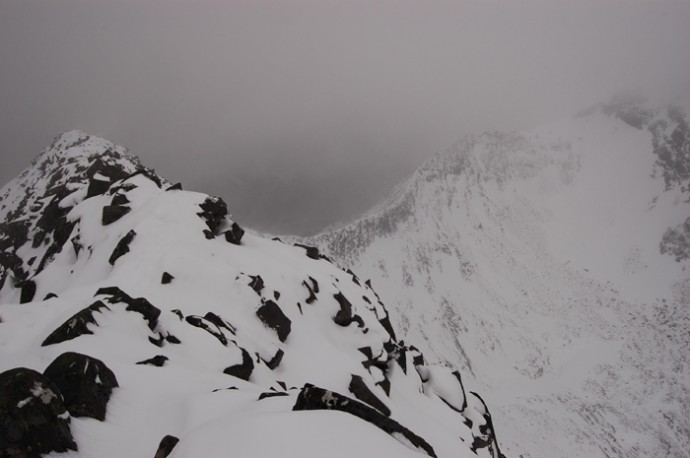 Further along, rain turned to snow up here but winds not too bad (yet!): 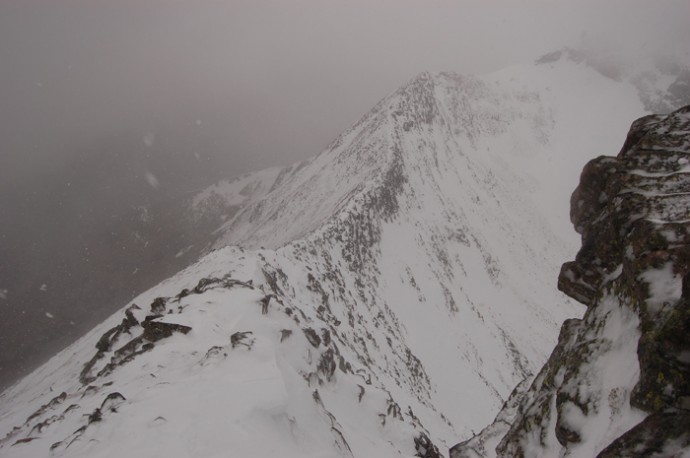 Arete was best ridge/scramble yet, plus snow so who needs views!

Made it round to start ascending Nevis, wind strong here so had to sit down for a minute. Decided to take photo so got camera out of pack, when I did this an empty water bottle blew away - no big deal. Then the camera bag (& spare memory card etc) took flight never to be seen again

. Wasn't using leash with ice axe and had dropped it on the arete but it luckily stuck in snow so you win some, you lose some Another really hard slog in the powdery snow to reach the plateau, near whiteout further up but could see rocks ahead so kept picking one as a target. Finally gradient eased off & reached top. Couldn't really see anything but GPS found the summit: 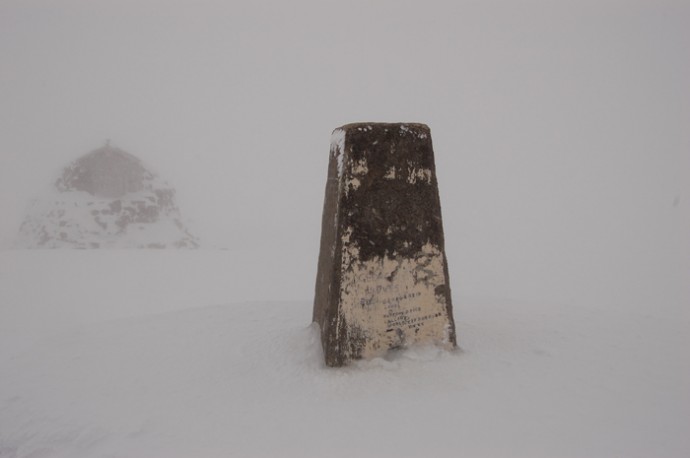 Wasn't sure if this was the top as trig point supposed to be on top of cairn, must have been buried in snow. Met 2 guys roped up on top. The WH report says you're supposed to be smug about doing the arete, but when I casually mentioned my achievement they countered with Tower Ridge which took the wind out of my sails a bit

Couldn't see anything on top with cloud & snow so used GPS to find the track down, kept an eye on it and the edge of North face. There are a lot of cairns up here which may lead to track but it would be easy to get turned around and wander in circles.

Top of track buried in snow so went straight down instead of zig zags, eventually snow cleared so crampons off and wandered down. Met a couple heading up, snow had turned to rain further down and it was blustery so they were having a bit of discussion. I told them about conditions on top & thought they should have turned around as they didn't looked geared up for it. They kept going though, which is probably what I would have done too

Further down the rain took its 5min break so I got some views at last: 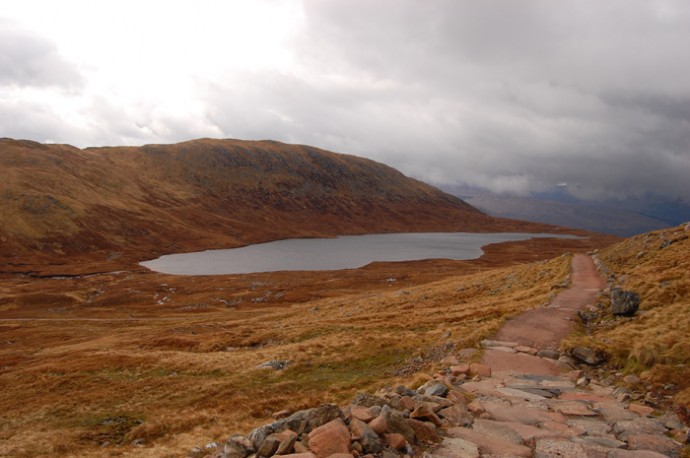 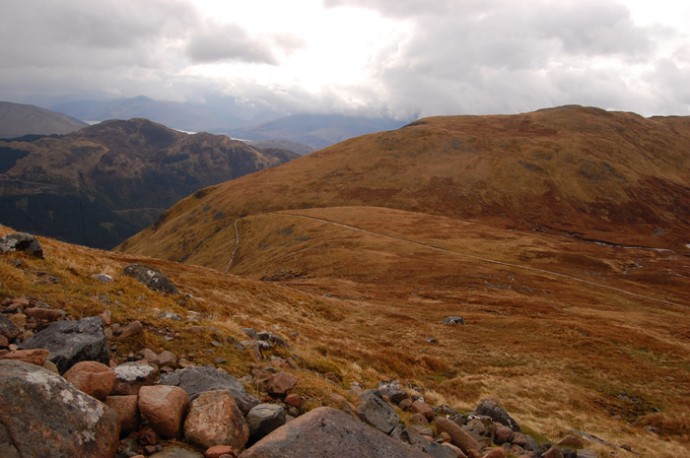 Walk down seemed to take ages, but brilliant day overall

Well done there. Great effort considering it wasn't the best of conditions - some nice atmospheric snaps in there.

Did this a few weeks back, and the visibility was even worse! A good few metres visibility on the ridge. Well done gman, that was a fair old walk. The hills definitely look better in the snow.

Must be quite a bit of snow up there, and it won't be going anywhere for a while - saves you climbing the cairn though!

Fudgie wrote:Well done gman, that was a fair old walk. The hills definitely look better in the snow.

Thanks for the nice report.

We were in Glen Nevis @25/4 but reading your description I am glad we did not even try to reach the summit along the tourist path.

Great report! Really like the pictures you managed to take too. I did this with perfectly clear blue skies almost exactly a year ago. The arete was fantastic then but I want to go back and try it in the conditions you got, that looks much more impressive!