Cavorting in the Cairngorms

Cavorting in the Cairngorms

Cairngorms.gpx Open full screen  NB: Walkhighlands is not responsible for the accuracy of gpx files in users posts

So after much nagging, I’m finally getting round to the report for last weekend.

Alan came to pick me up after work on Friday, and we drove over to Aviemore for a night in a hotel – Very civilised for BC! The plan was to do Cairngorm and Macdui from the ski centre, drop down into the Larig Ghru for a night at Corrour, then back to the car on Sunday via Cairn Toul and Braeriach.. Straightforward enough - a Cairngorm classic.

So not particularly early on Saturday morning, we arrived at the ski centre. There weren’t many folk about at that point. The clag was down and the forecast was grim. Alan had brought his touring ski’s for a play in the snow, so we parted ways, making plans to meet at the ptarmigan centre up the hill for a cuppa. 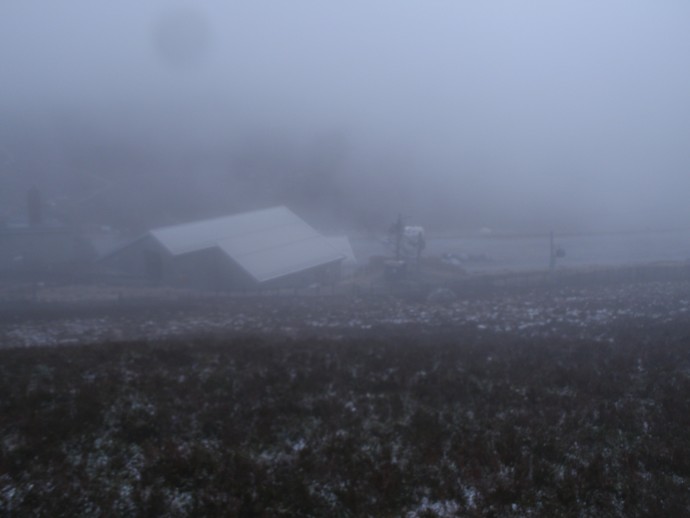 Leaving the ski centre behind..

I headed up what was signposted as the windy ridge path, and he went another snowier way. Well I say snowier, as I ascended I was soon in knee deep snow, and the precipitation had come on heavy. At least it isn’t windy I thought.

It only took me half an hour to get within 400 yards of the Ptarmagan centre, then it disappeared from view.. Everything did, and I was left floundering around in a whiteout, nae really sure which way I was going. That last 400 yards seemed to take ages! But eventually I heard people and noises and the place became infinitely easier to find. No sign of Alan, so I hung around and chatted to some trendy ski folk and waited for him to show, feeling quite smug that I’d beaten him after he was moaning at the bottom that he would be hanging around for ages waiting for me

When he did arrive, he wasn’t looking well at all, he hadn’t felt quite right all week, but now he was shivery/fevery

We discussed the situation over a cup of tea, and decided to nip up to the top of cairngorm and see how he felt - it wasn’t far. I found the going a lot easier walking in his ski tracks, and there was no chance of losing our way on the well marked path – not even in the snow. It was a rather white at the top, but I managed to identify a large cairn sized/shaped lump to bag, and also an icy transmitter or suchlike. No views.
Alan wasn’t looking well, so we turned about and headed back to the ptarmigan centre to eat our sandwiches. 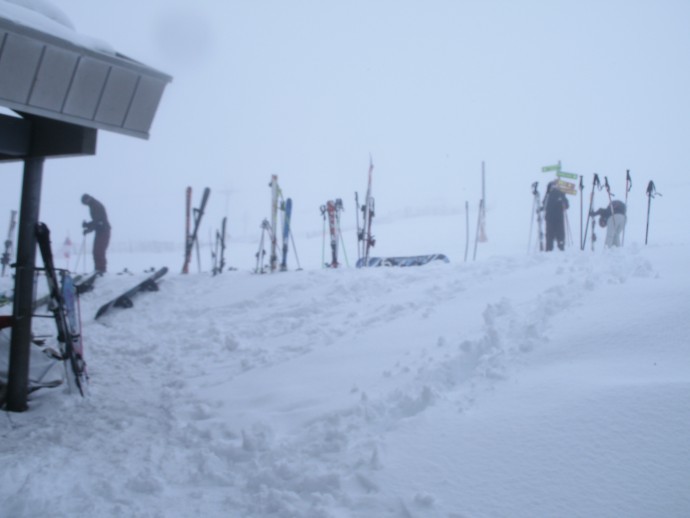 I was a bit PO’d about another trip failure, especially at 11AM on the first day! But the conditions were atrocious, so that was at least some consolation. I returned back to the car using the same route, as there were skiers everywhere, and met quite a few nice folk to chat to on the way down, so Alan had even finished his faffing by the time I got back to the car park. I felt like I had cheated on this hill, it seemed like no effort at all to bag such a biggie, and the music being blared out onto the hill and luxury of a tea room 10 minutes from the top I found bizarre.. A most unusual morning. So as we drove back down past Loch Morlich toward Aviemore, I was resigned to going home, but Alan suggested going out to Glen Feshie and spending the night at Ruigh Aiteachain bothy. We had planned a couple of trips to Glen Feshie which had never come off, so my heart went Yaay! And the mood lifted as we ticked off the places in the road atlas, on the way to the end of the Glen Feshie road. The weather had also improved significantly, and by the time we set off, it was blazing sunshine. I seem to remember my dad saying that the name Glen Feshie means something to do with there being good weather there, and he wasn’t wrong

It was about then that we discovered that we were off the maps we had brought along, so at every point up the glen where the path split, there was a discussion about what we could remember about the location of the bothy. There was a bit of lazing about in the sunshine as well. It seemed hundreds of miles away from where we were in the morning. Beautiful weather in beautiful surroundings and so quiet in comparison to all those skiers, clunking tows and loud music blasting out onto the piste.

We found the Bothy at about 3PM without any trouble in the end, and what a bothy! It was definately a good ‘un. Plenty wood as well – more than we could burn in 100 nights! although the stove in the bothy has seen better days, and after dark, even with the stove blazing, it didn’t seem to heat the room much. There was plenty of mouse activity overnight, I had hung up all the important food, as I had spotted droppings about, but a cup-a-soup got it Sunday morning, the king of faffing took an hour to pack up after breakfast, so it was 10AM before we set off. I knew there were a couple of munro’s nae too far away, and I managed to convince the poorly one that it wouldn’t be too difficult to ‘just nip up and bag them’. I could tell from his demeanour he wasn’t convinced.

The lack of map was a hindrance, but sgor gaoith was on the edge of our map, and if I remembered correctly, there was another one up there too which turned out to be Mullach clach a bhlair. Luckily I could remember the location better than the name

It wasn’t long after leaving the bothy, before we were ascending up a track toward the snow once more. Looking back at Glen feshie

We stopped on a rocky outcrop early for lunch, just below the snowline, and enjoyed cracking views, not just of an impressive corrie below, but also away over as far as Ghlo and Lutharn mor. 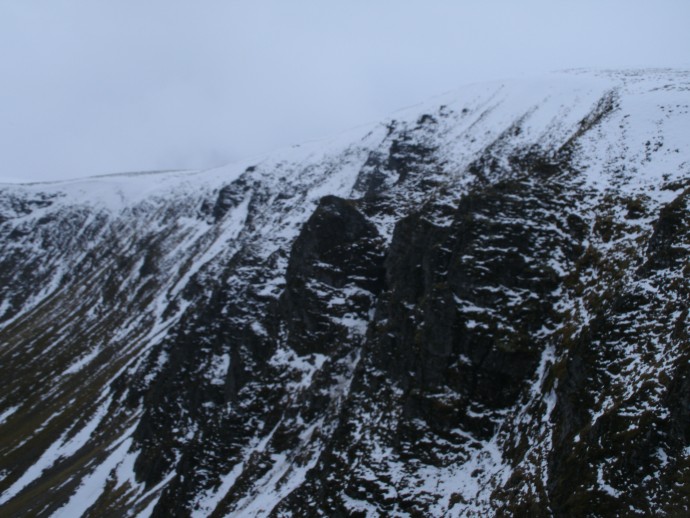 The stop was cut short when a snow shower came on, but it didn’t last long, and we were soon back in the brilliant sunshine, trudging through the snow. Mullach clach a Bhlair, was an uninteresting lump, but with good views over familiar cairngorm hills which looked dark and foreboding – we were definitely in the best place for the weather by the looks of things. Always feel smug when that happens We were soon heading back the way we had come, with Sgor Gaoth in our sights in the distance. Alan wasn’t convinced that we should attempt it with him not at his best, but I tried to convince him by saying it was a shortcut really.. Just a wee white lie.. The walk across the plateau was a tad laborious. We stopped for 2nd lunch in a sheltered dip beside a wee stream, then it was upward again through a bog, that was tricky to negotiate in the snow which was getting slushy in the sunshine. I suffered a bit with snowblindness, but the distinctive peak kept on getting closer until we got to the only feature on the white lumpy wasteland - a wee cairn that I’m sure must of been the marker on the main path, for the stalkers path up to the summit. We ditched the packs and carried on, feeling all energetic without the weight. It didn’t look far, but in the deep snow, it took us 45 minutes from the path to the summit. It was well worth it.. beautiful views down to the loch below. Alan even grudgingly posed for a photo, which is pretty unheard of!

Straight down from the summit It was soon time to retrace our steps back to our packs and to do the descent back to the car. It was a lot easier with the track already broken, and we made good time. My flat right foot was really giving me jip though, and as we descended I had to take many breaks to rest it. Someone had put a lot of effort into the path and it was a pleasant descent ending in a section through a beautiful native pine forest. The last wee bit along the road to the carpark was very painful for me, but it was brightened up by a wee lamb that was ever so cute J So we arrived back all sunburnt and sore, but a nae bad weekend all things being considered and a few more ticked off the list

nicely done there bc. Would have been a crying shame to have gone home

Nice one BC, glad to see this trip passed without incident

Kudos to your friend for not quitting and leaving you out there. Wee stay in the bothy seemed to rescue the weekend

mrssanta wrote:nicely done there bc. Would have been a crying shame to have gone home

Aye, you know how much I hate going home early

laconic surf wrote:Nice one BC, glad to see this trip passed without incident

Kudos to your friend for not quitting and leaving you out there. Wee stay in the bothy seemed to rescue the weekend

notice how I chose nice safe round hills this trip!

I almost think of bothy's as luxury accomodation these days.. which concerns me a little.. they arent that comfy, are cold, mouse infested, have very hard pallets/floor to sleep on.. better off in your tent if there isnt any company me thinks..

tony.cee wrote:cracking report, has everything that makes me want to get back out there asap. planning a similer route in the area as soon as i get off this rig.....if i ever get off this rig.

Oh stuck out at sea.. sympathies

What rig you on? Alan's an ROV guy so he is back offshore this weekend, and I'm back to walking on my lonesome