Mid week sneaky peak time again. Polly, Andy & I headed to Blair Atholl to take on Beinn a Ghlo. MWIS giving us 40% chance of cloud free & promised every kind of weather imaginable.
First hurdle once we had found Loch Moraig was moving the locals along as they were blocking our route. Once Andy had successfully shoo shooed them away we headed up the track. The old bits of corrugated hut are now completely gone, but a wooden hut & a stile are still there. The ground across to the base of Carn Liath is quite marshy & some hopping was required. Once at the stone wall it improves somewhat & leads to the fairly hard pull up the scared path that you can see from the car. At this point we could see all around us as we were below the cloud although the remainder of the massif came & went. Trig point or cairn? Cairn looks higher, but photos at both just in case. Much fun with trying to stand on the trig. The route to the next Munro is straight forward & we could see the path going up it, but it looks like a big drop down from where you are. In reality you do not lose much height. From the bealach there is also a path that takes you back to the track, if you only wanted to do the one.
The odd snow flurry came & went on the ascent of Braigh Coire Chuinn bhalgain limiting visibility, but we were still below the cloud.
The wind got up a bit on the summit ridge while we were looking for a sheltered spot for lunch. No shelter to be had so summit photos & on we went. Andy then commented that he did not much fancy the front coming our way & bam pea sized hailstones straight in the moosh. As well as sore it was inconvenient timing because we needed to take a right of the broad ridge. Once down a bit we concluded that we had gone slightly too far along before dropping down. This turned out to be a bonus as we now had a sheltered spot for lunch. While dinning the cloud lifted & a very snowy Carn Nan Gabhar came into view. We could almost make out the rising traverse path that takes you to the summit ridge & one going directly up to the top of Airgiod Bheinn although it looked quite dicey. Once off the traverse & onto the summit ridge there is a wee rise & then the first cairn is revealed, followed by the trig point & beyond that the second cairn which is actually the true summit by 1 meter. The cloud stayed high & we could see the other summits & most of the ridges. We made a fairly swift descent back down to the bealach following a near miss with a banana case & some glissading. The walk out is legendary already, but please god ‘a good stalkers path’ who are you kidding. 11k, most of it with one foot in boggy stuff, not the sort that you would sink up to your waist in, the other stumbling over lumpy heather. Once you traverse around Beinn Bheag you spend an age traversing Carn Liath. At one point the path splits. The left hand for looks like it is quicker to the track, but the track heads out to a farm in the wrong direction before coming back on itself. We took the right hand path which continues straight ahead until you hit the track & eventually pass the wooden hut on your way back to Loch Moraig.
The route across the hills is great & I think if I were doing this again I would rather walk back over them even if it adds 600 meters of ascent as always hindsight is a wonderful thing
Another great day in the hills. 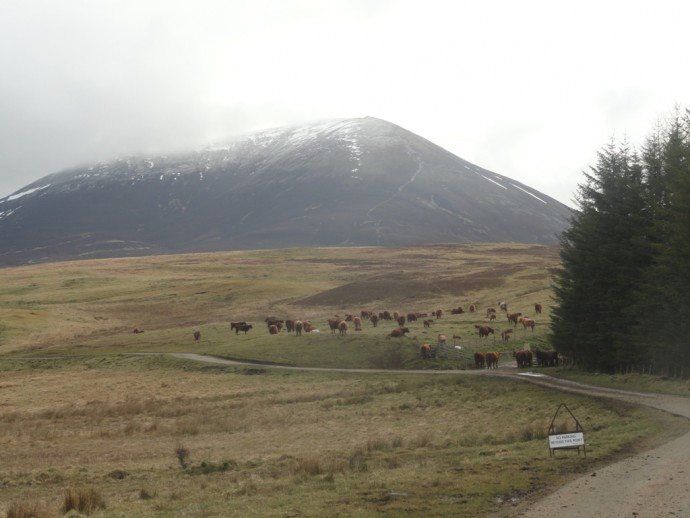 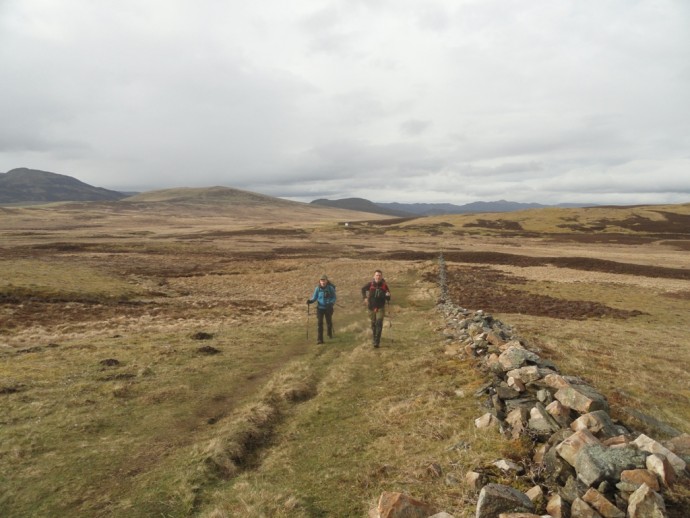 Path from the track 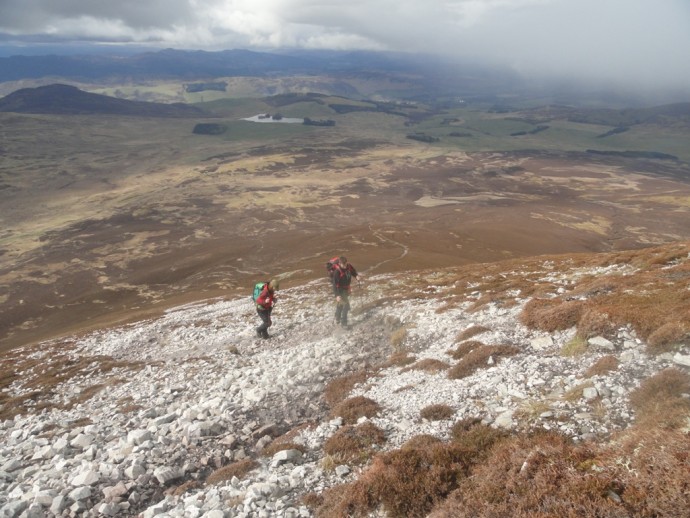 Loch Moraig from the ascent 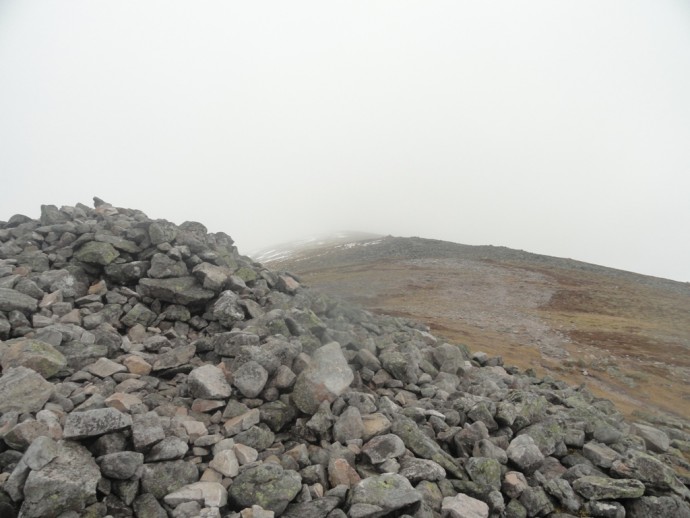 Ridge to the summit of Carn Liath 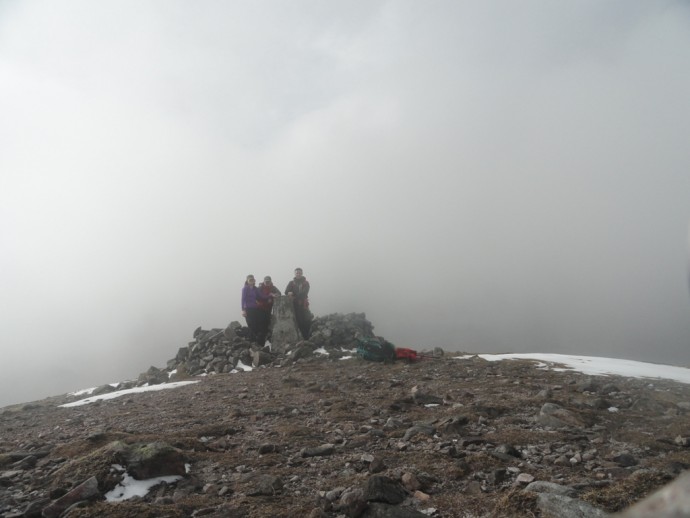 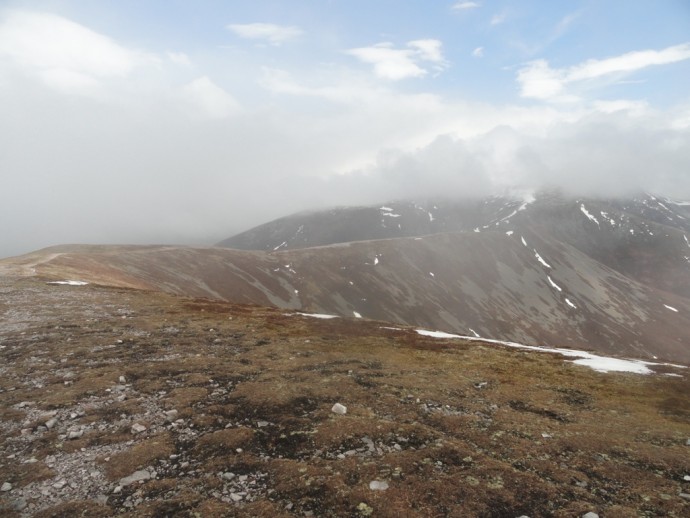 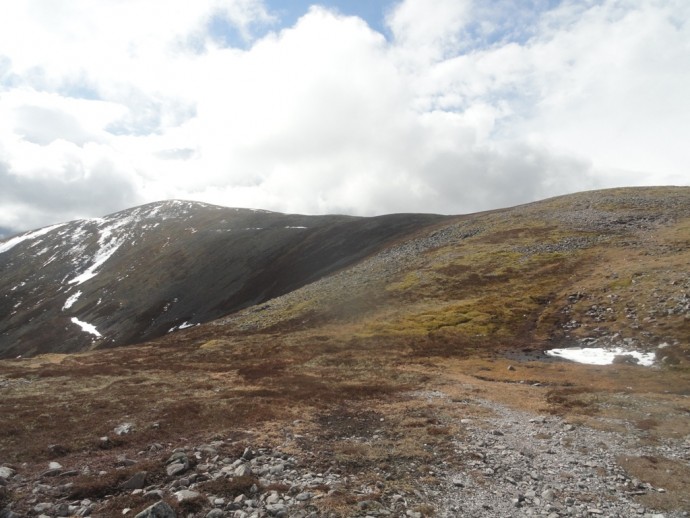 Looking back to Carn Liath 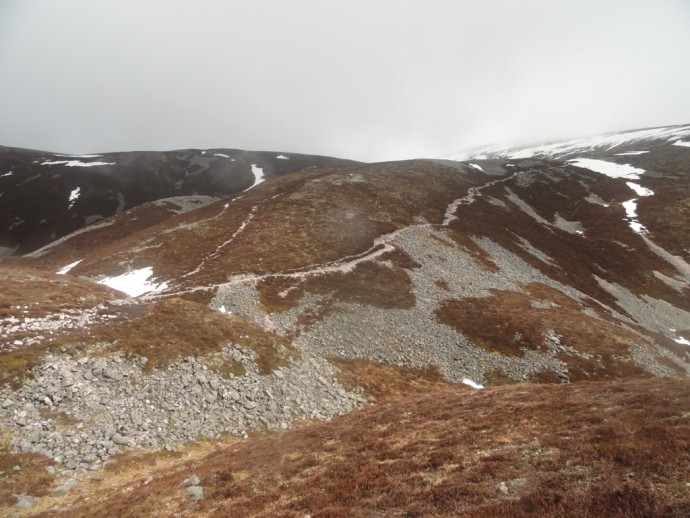 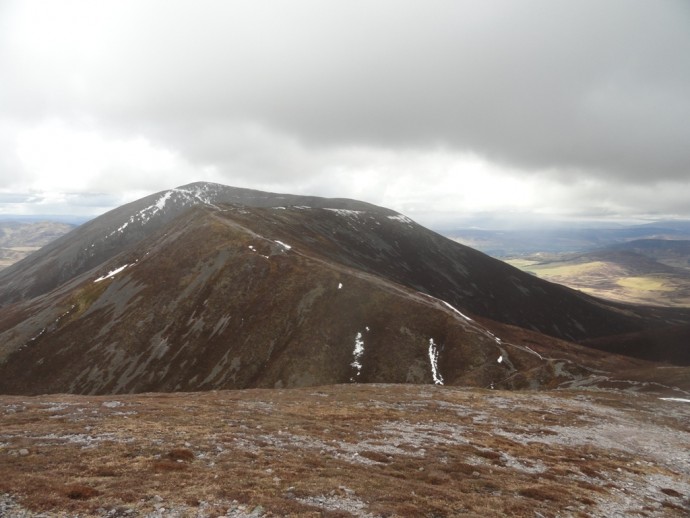 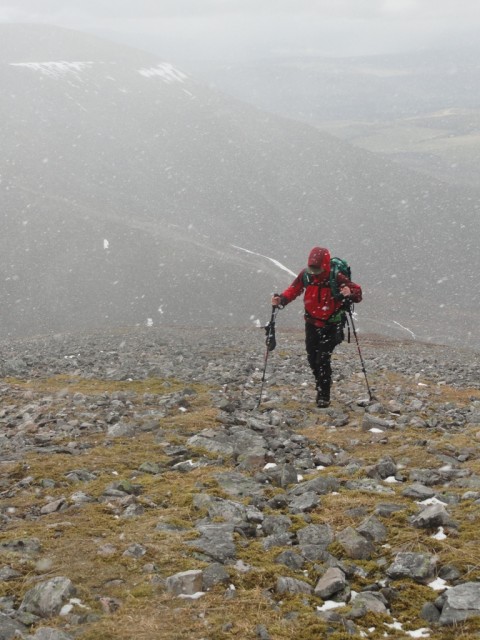 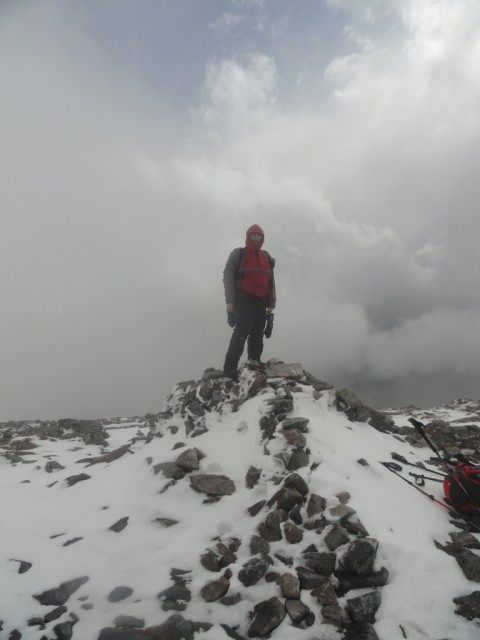 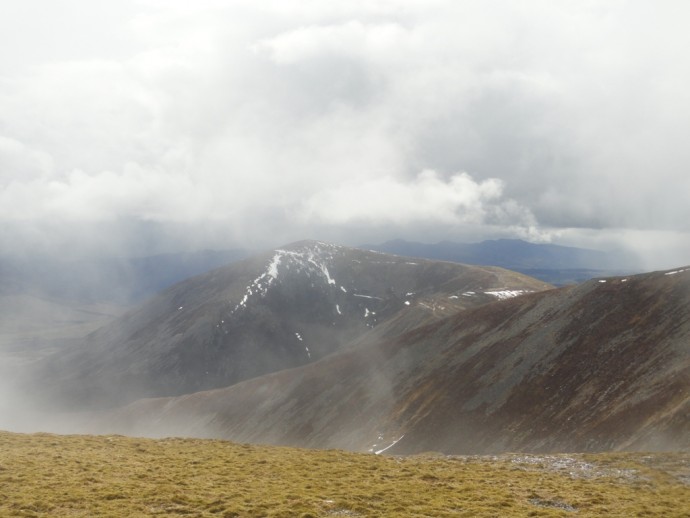 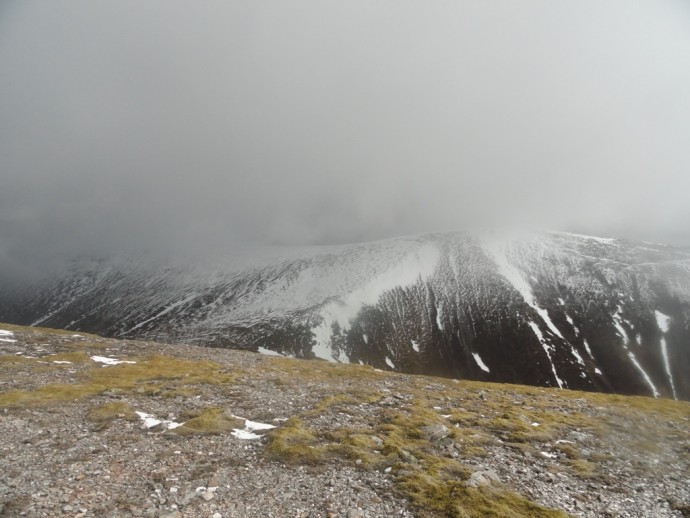 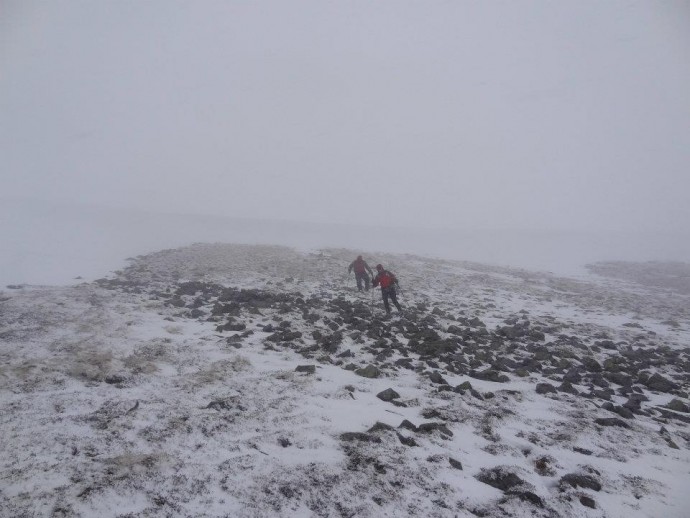 Dropping down to the bealach 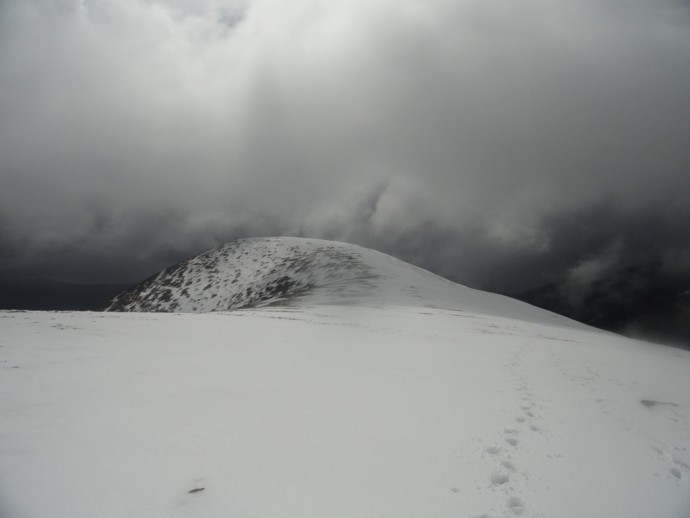 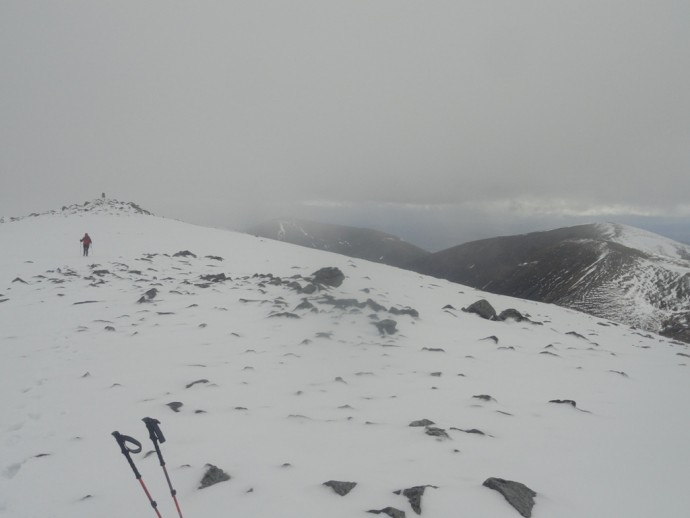 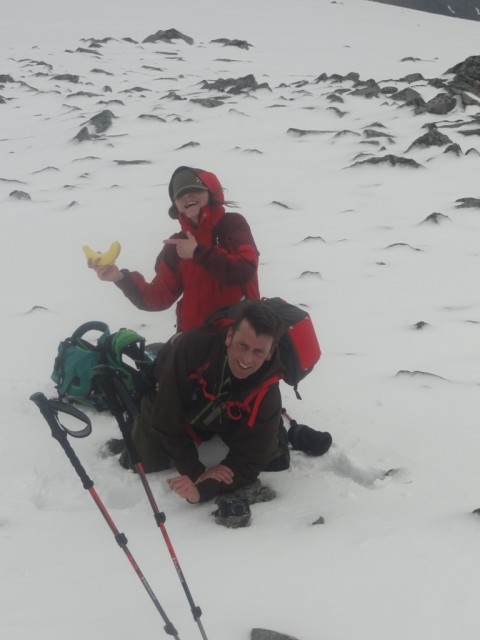 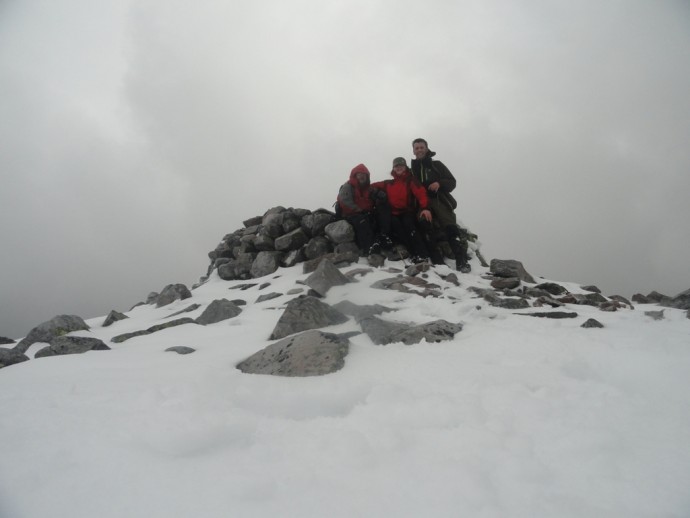 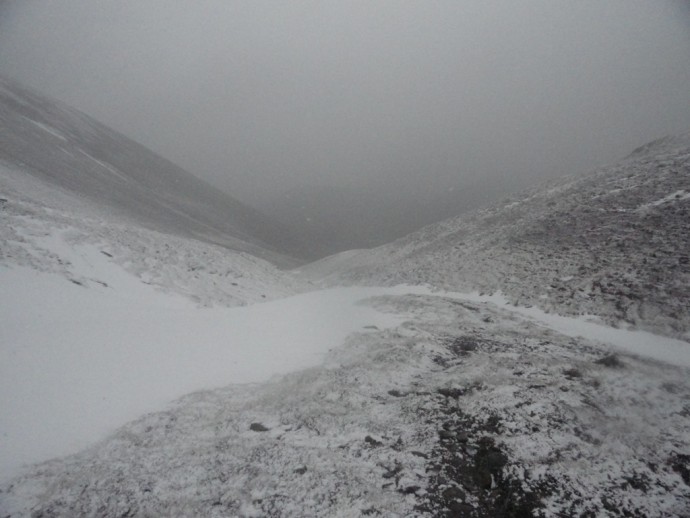 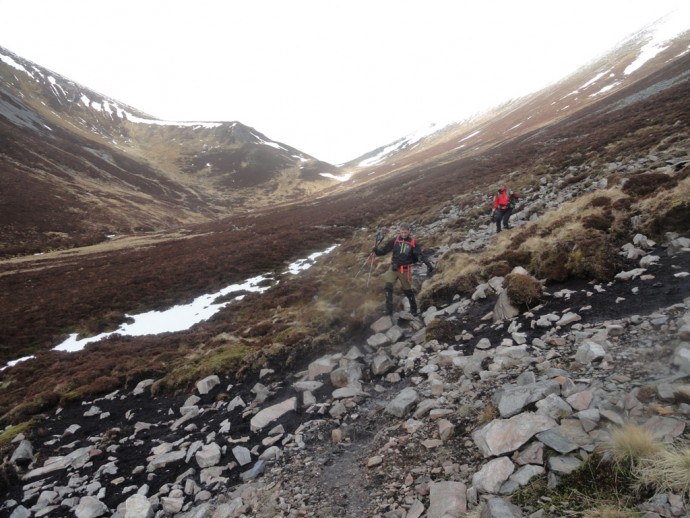 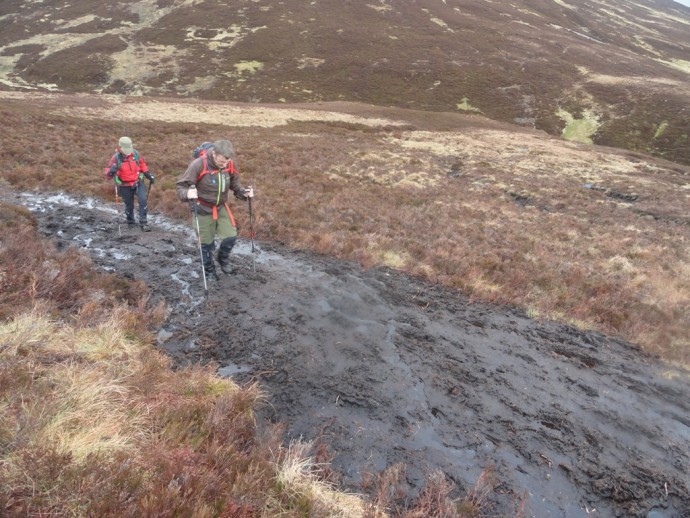 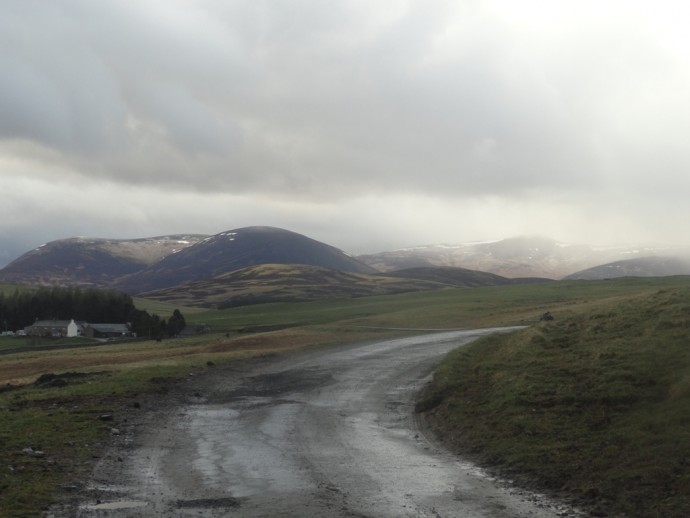 Hi Jonny.good report you got more views than i did....and as for the great stalkers path a pure bogtrot i thought it would never end.well done

Love the photos, the 'Snow Time' one really catches the fun of hiking in a squally snow shower well

Must be somethin' about these hills jonny.Had a real 4 seasons in one day on these last may sun,snow ,hail and wind 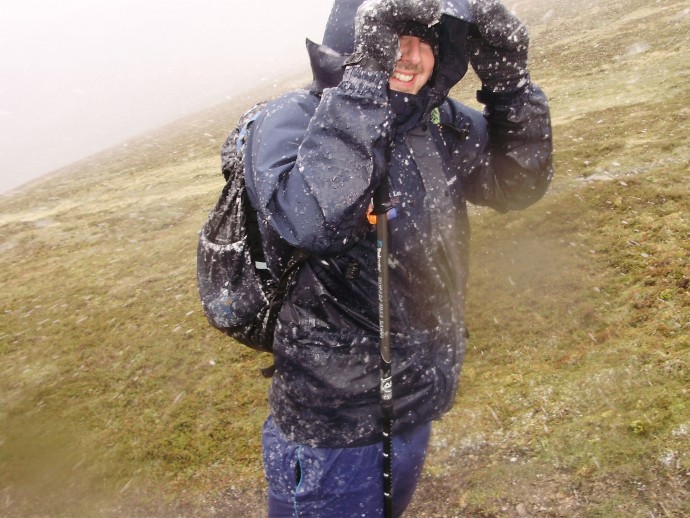 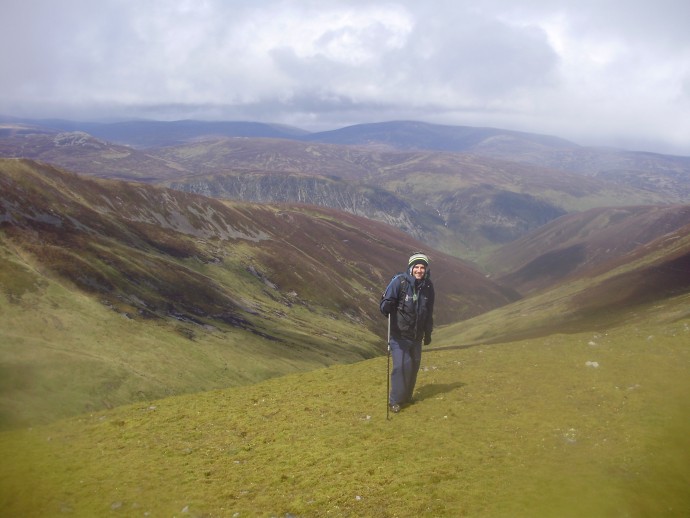 Wow Johnny, thats you storming your way round the Munros, feel sure you are going to compleat

I understand about the banana, but where does the love and peace bit come into it

morag1 wrote:I understand about the banana, but where does the love and peace bit come into it

Its a song by a band i used to follow. Dr & the Medics.

Never thought about that, sorry to be so thick

Not sure what Polly's about to do with that banana, but hey, each to his own

well done on another 3 Johnny, now were can i get a job with a weekday off ???

I remember when I had climbed more hills than you,you need to get a job so I can catch up m8,looks like you all had fun(well polly & andy anyway)

Cracking report Jonny, you are sure bagging a lot at the moment! lovethe snow ridge picture too!

It's great seeing the twisting ridge at the top but certainly a long walk back - despite that, not sure I'd want to go back over the tops to avoid it ! A bit envious - think it'll be a wee while before I'm back out - cheers

NB folks don't worry about the banana, it was in its own protective case- can never be too careful!!!

Thanks for looking after me again your highness

You seem to be completing munros at a rate of knots, are you aiming to get them all done this year??

Cheers all for the comments