A lovely Saturday morning with very few clouds over the Barrow skies saw an early start for Damson & I as we dropped my wife Ellie off at her shop to get on with her Wedding Dressing business whilst we dragged our "out of shape" carcasses up a few fells. It had been about 5 weeks since we last got the chance with one thing and another and it was beginning to feel like I wouldn't see them again.
We picked up John and headed out along the western coast road and over Corney Fell to Ravensglass before hooking right and down the threatening / severe / picturesque surroundings of Wast Water towards the car park at Wasdale Head.
The sun was trying to break through the fluffy white cloud cover and all looked good. As we climbed out of the car we felt the chilly bite of the wind as it streamed down the dale. Our first decision of the day was left or right as we had planned Pillar but on seeing the top of Scafell not in cloud (as it had been on nearly all previous visits here in past 2 years) we debated whether today was the day. The wind made our minds up and we thought that Pillar was the safer of the two so round the Wasdale Head Inn and up into Mosedale we went.

Knowing we were heading up to the right and onto Black Sail Pass, we took an early right turn from the main path and over a style to the other side of the dry stone wall. (The style had no rungs on the far side which should have told us something really). We followed the wall further up the valley realising we had probably gone wrong somewhere. On spying the correct path at a much more sedate angle than the one we were taking, our next challenge was finding a place to get back over the wall. This came much further up after managing to find our first bog of the day and a less than steady path.

Back on the main track, we proceeded up and right , over the beck and up a series of stone steps to reach Black Sail Pass. The wind had been fairly brisk down in the valley but up here it was unhindered and had a good go at taking us (and another couple we met hunkering down for shelter) off our feet. We pushed on left towards Pillar hoping that the wind would die down a touch, and for the most part we got away with it bar the more exposed areas where rock cover wasn't available. The turn off for the High Level Route was probably the windiest section of the day and very quickly made up our minds that the summit route was the choice of today rather than visiting Pillar Rock across the precarious ledge. The northern side of Pillar was more sheltered than earlier on and we made good progress up to the summit. Heading up to Pillar 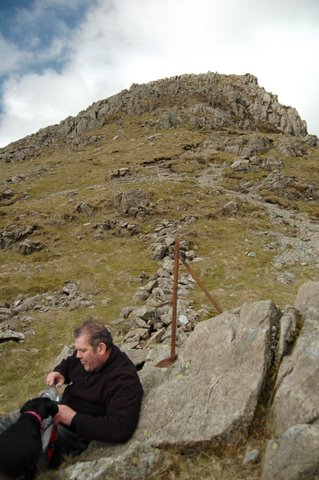 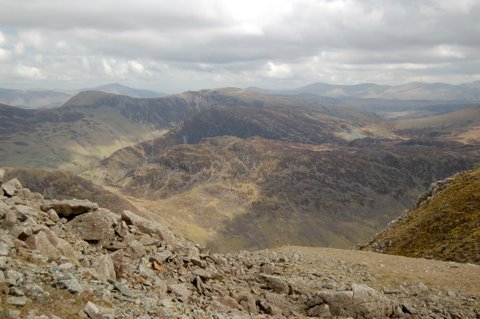 View over Haystacks to Robinson Damson & I on Pillar

This was John's highest Wainwright so far so we celebrated with a quick snack and a drink before getting out of the wind and heading down towards Scoat Fell.

The descent down to Wind Gap was quite steep (ironically this was probably the most sheltered area from the wind on our high level trek) and we crossed the band taking in the stunning views to Scoat Fell & Steeple and out along the ridge to Red Pike. 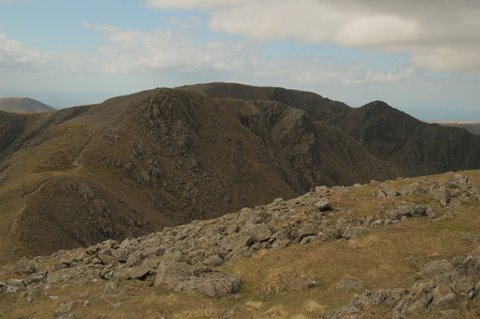 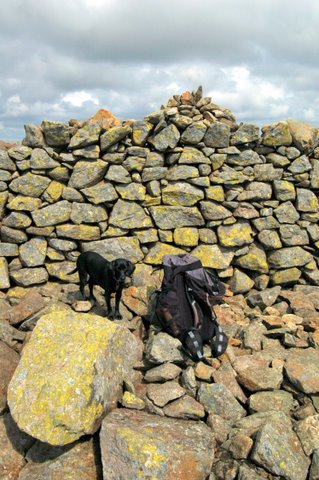 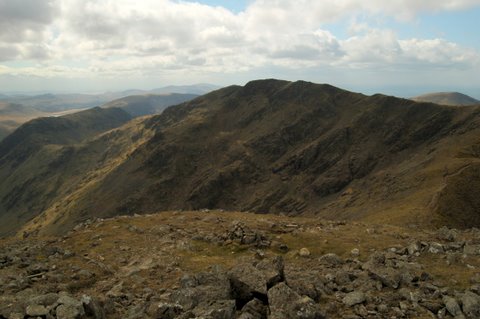 We stopped to take pictures at the cairn on top of the wall denoting Scoat Fells summit.

From Scoat Fell we popped around the corner to Steeple and onto the outcrop of rock that made our third summit of the day before returning back onto Scoat Fell. 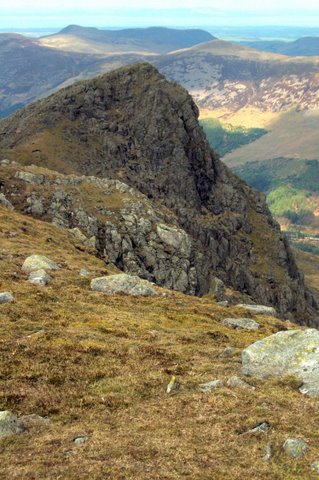 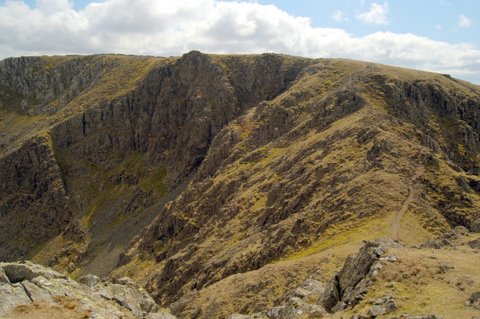 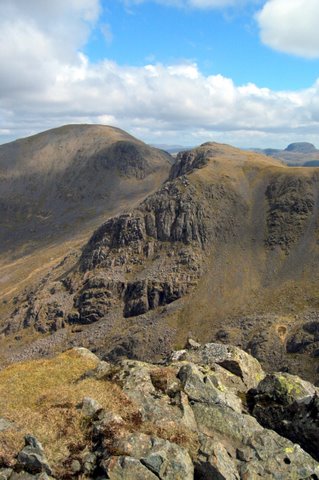 Looking back to Pillar 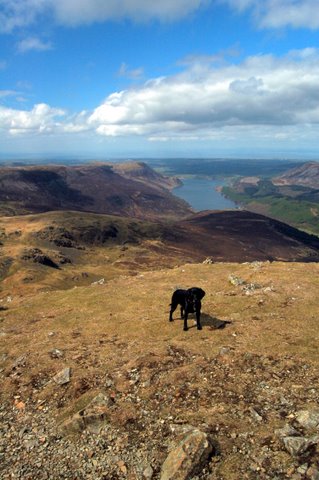 Damson on Steeple over Ennerdale 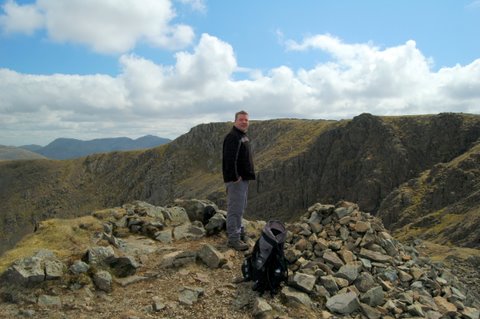 Leaving Haycock for another trip, we headed down the ridge towards Red Pike and it's impressive cliff face summit. At this point, the wind was dropping slightly and the sun has its brightest spell so we sat on the grass looking out towards the sea and grabbed a sandwich and some more photos looking back over Mosedale towards Pillar and our earlier route. We dropped down to Dore Head on a steepish path to the start of Yewbarrow. We were all feeling the effects of a few weeks out (including Damson) and did not want the climb back up onto Yewbarrow, (especially if the wind was going to pick back up again) so we followed the route down to Wast Water to the north of the fell and right round it as we followed the road back into Wasdale Head. 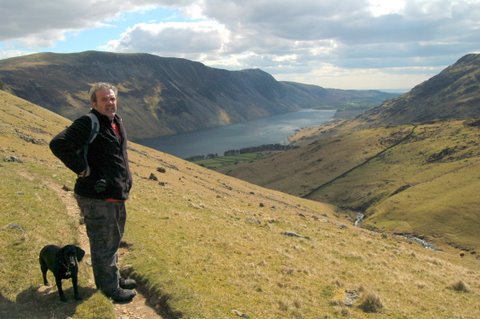 Path under Yewbarrow to Wast Water 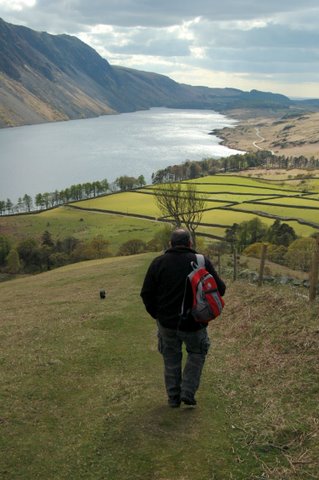 Final descent down to Wast Water

Plenty of people out and about today and one poor bloke & a couple with a young retriever (Marley & Me we nicknamed them) must have thought we were stalking them.

A great, longish walk made more of a challenge by my state of fitness and strong winds.
Another 4 off the list which leaves me about 80 to go.

Hi Craig, glad you and Damson (and John) have been out and about again

I enjoyed reading your report but what's happened to your photos???

Phooooey wrote:The style had no rungs on the far side which should have told us something really

Hi Phoooey, did the same route last year sometime in similar, cold & misty rather than windy conditions, we also didn't bother with Haycock, which on reflection was a mistake as it now one of the odd ones to do on my 'collecting trips' and a long drive up to Wasdale from home. I'm thinking a weekend camping later should get it though! Shame no pics though! Dave

The photos are here and there are a few crackers. Been suffering with a terrible BT internet connection for last few weeks that should be resolved this weekend. I'll post them with map then as I just haven't been able to thus far.
Thanks for the messages, always enjoy reading of others experiences on the fells we visit.
Haycock was left as the walk was long enough navigating Yewbarrow, but on returning to the car park I was told that the scree down to the left of Dore Head is a good descent route and could have knocked off an hour or so off the route (looks dodgy on a map and from across Mosedale).
A route over Knott Rigg and Caw Fell up onto Haycock is the next challenge.
Planning an Ennerdale area camp soon so may go from there. Need to get my first wild camp of the year in too so I'll have to get planning. May even try for the remaining 80 by year end although thats a fair old challenge finding the time.

Great report Phooey.....am beginning to realise how out of shape I am as well as not walked for a few weeks myself now...hoping this weekend will bring some better weather and a chance to escape on to the moor before I start crawling the walls!!

Glad you've posted the photos now; there are some fantastic ones there