I sat in the Morrisons cafe in Fort William nursing a hot chocolate and looking at the rain bouncing off the window. The MWIS had suggested a high pressure would start to assert itself tonight, but so far no sign of that.  I'd tried all sorts of delaying tactics, including the implementation of copious scampi and chips, but still it was lashing down. I checked my watch. I'd better get moving; I like to camp high and I was burning daylight. Cloudy, rainy daylight.

The rain started to ease off as I stop/go-ed  my way out to Spean Bridge (who knew Fort Bill had a rush hour?) By the time I'd bounced and scraped the car along the rough track at Coirechoille and parked up, things were definitely improving. The cloud was clearing and the rain had got bored and wandered off to become snow on the Cairngorms. I packed quickly and got on the move, heading along the disused wee tramway. The jumbled girders and sleepers and remainders of bridges added some visual interest to what is a pretty boggy path. 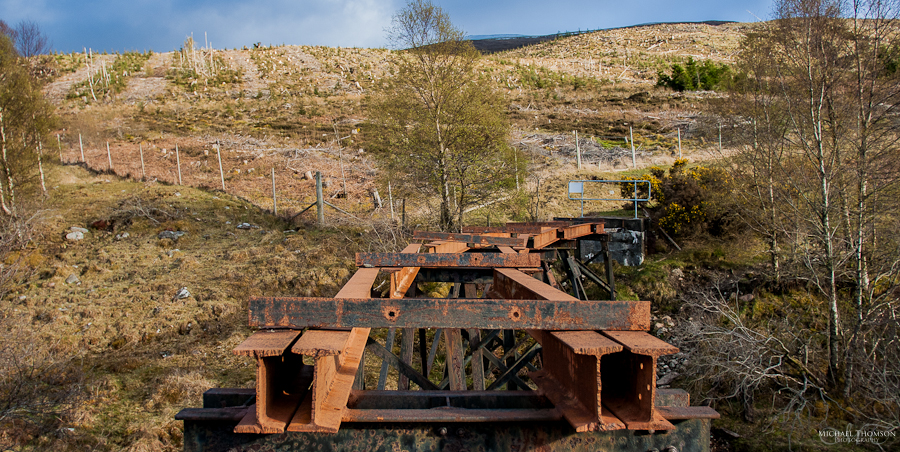 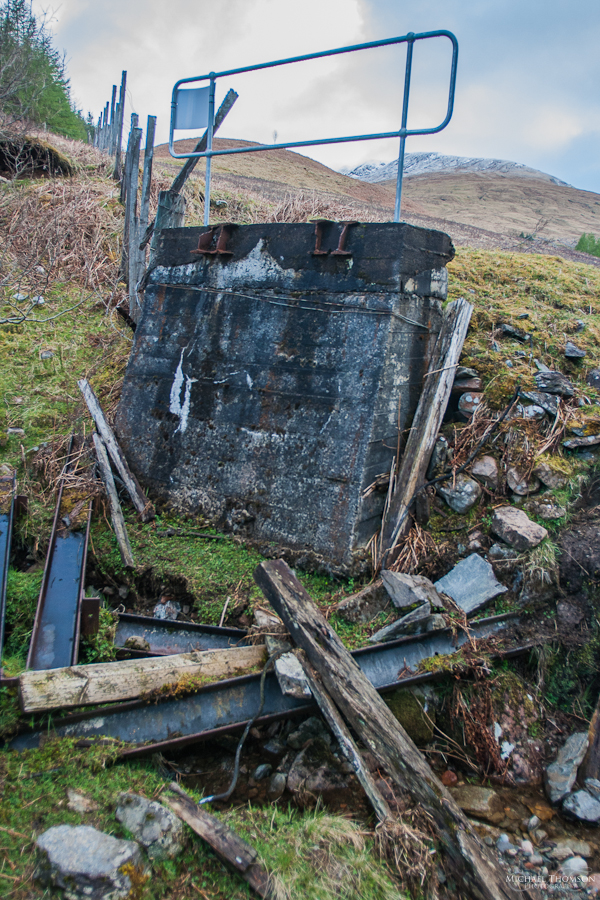 I'd ordered some new walking poles during the week and it was when I reached the river crossing I felt the need to curse the postman for not getting them to me for the weekend. A bit of teetering and tottering got me almost there, then sploosh, my right leg slipped off a slimy boulder and went in to ankle depth. As my boot started to take in water, I sorted myself out and scrambled to the other side, but the damage was done. I poured the water out of my boot and wrung my sock out. Bugger. I quickly dashed up the steep section of banking then started on the long continuous slope of Beinn na Socaich crunch, squelch, crunch, squelch. The sun dipped below the horizon and I kept plodding. 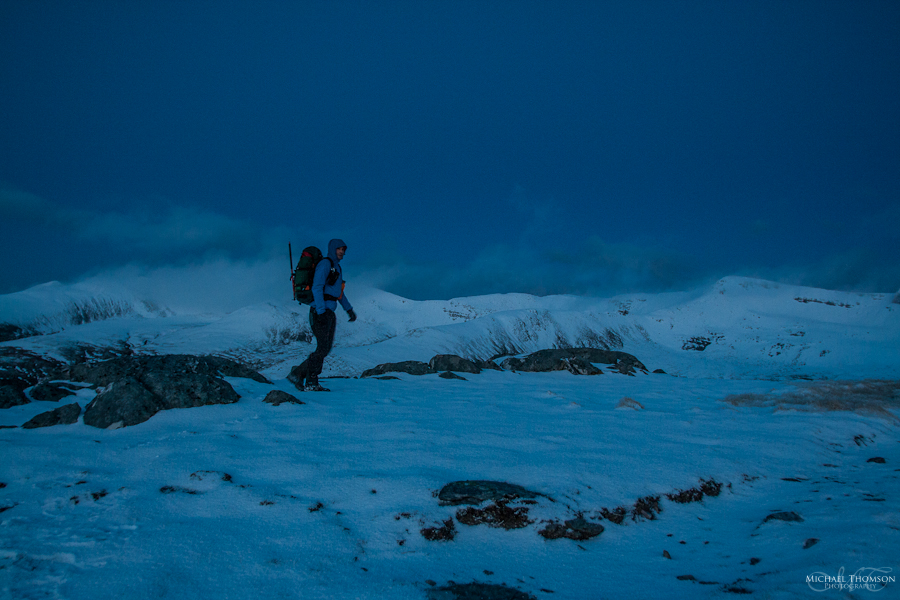 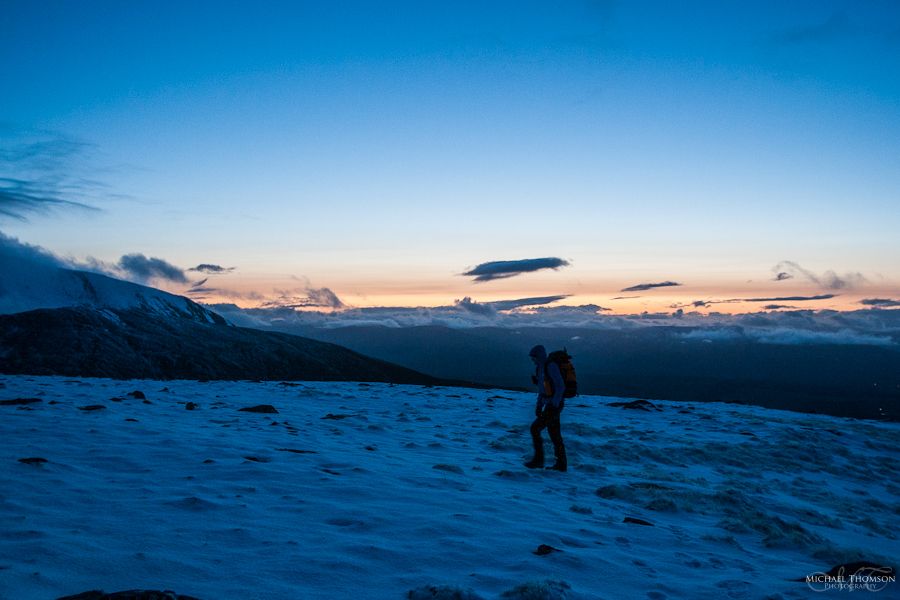 The ambient light was great so I figured I would keep going until just before I'd need to get the torch out and then find a spot to pitch. I hit the snowline, which was basically a layer of graupel, which resembled the wee polystyrene balls you get in packages. Maybe someone has bought the hill and they were getting it packed. I assumed they'd gone off to find a cardboard box big enough. 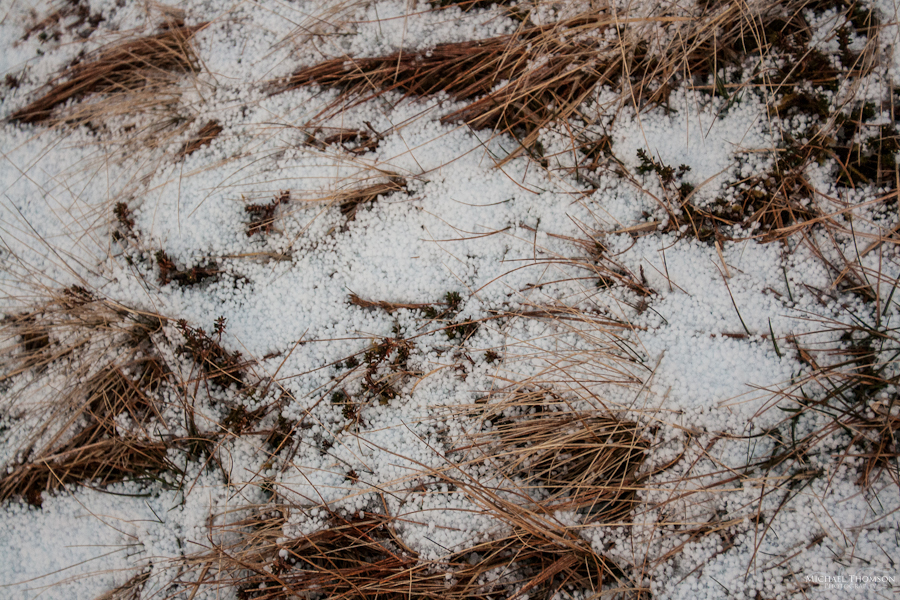 As it turned out the light faded gently for around an hour, then suddenly darkness started to fall like a stone. I looked around and figured I wasn't that high, then checked the altimeter: 890m. I looked around again; I'd forgotten the hills around me were big. I found a reasonably flatish snowbank and got the tent up. I unpacked and sorted my kit out, but there was a glaring omission. Where was the bag of dry camp clothes, with the all-important dry socks and insulated bootees? They were in the boot of the car, that's where. Double bugger. I got a brew on and settled down for the night.

I woke at 1am. I was cold. My feet in particular were cold which was hardly suprising. My mat had partially deflated, probably due to a significant temperature drop since my hot breath had filled it.  I puffed in another three breaths and raked in my bag for my pile-lined mitts, which I promptly jammed on my feet. Not the classiest look, but it would do. Back to sleep.

I woke up again and realised three things: there was some light outside, I was dying for a pee and I was flippin' baltic. The mat had done it's shrinkage trick again (I really must invest in an inflation bag) and my sleeping bag felt damp and cold. I got up, stuck my down jacket on, and surveyed my boots. The insoles were in the tent so weren't to bad, but the boots were solid and the laces were like trying to tie knots with welding rods. I persevered with them and finally got up and out. It was 5am and -3 degrees. 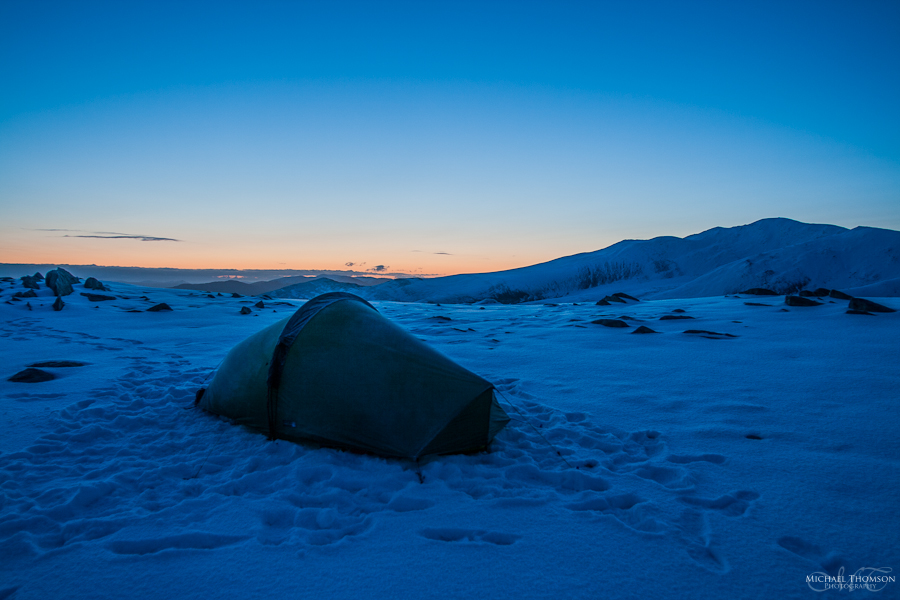 The toes on my right foot were tending towards numb. I've grown quite fond of my toes, they've served me well over the years so it seemed only fair to look after them,  so I had no option: get moving. I packed up and was on the move up Stob Coire Easain. The uphill plodding soon warmed my up and more importantly, circulation was restored. Silly boy, won't make that mistake again. I reached the summit and unpacked the stove and popped some snow in to melt, time for breakfast. 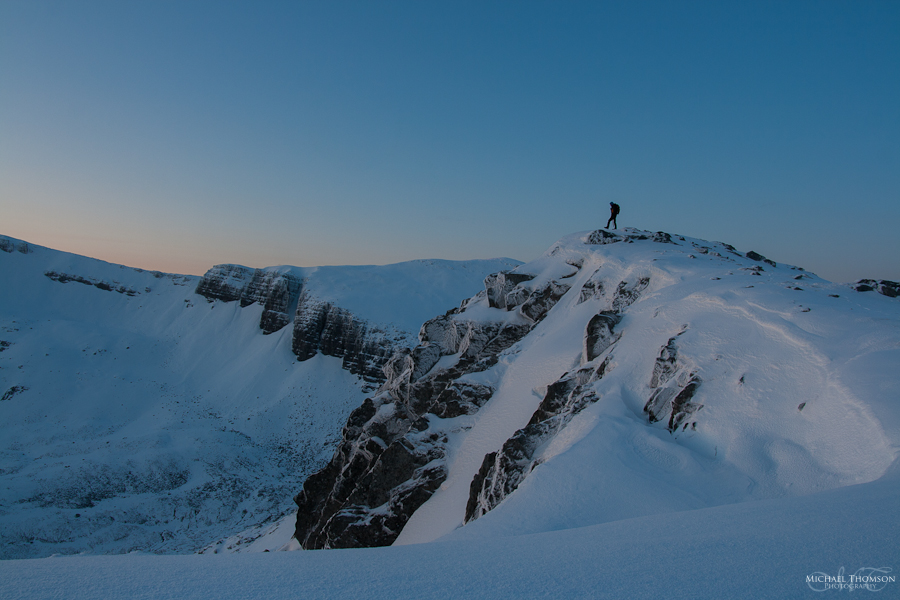 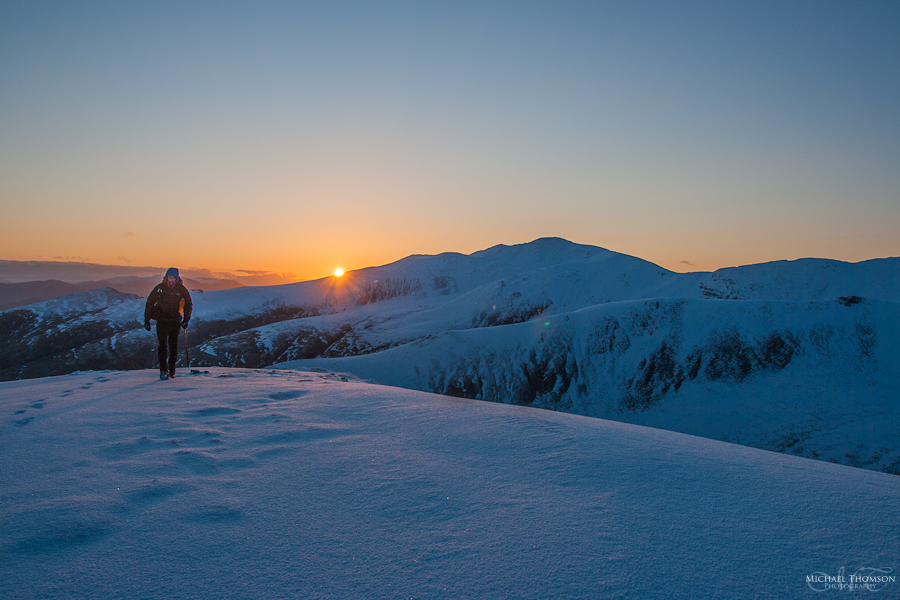 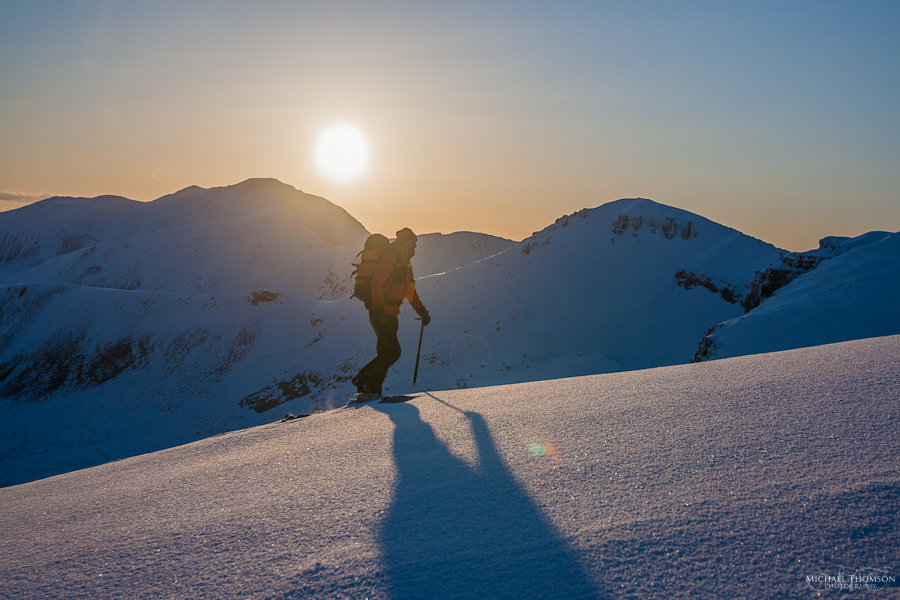 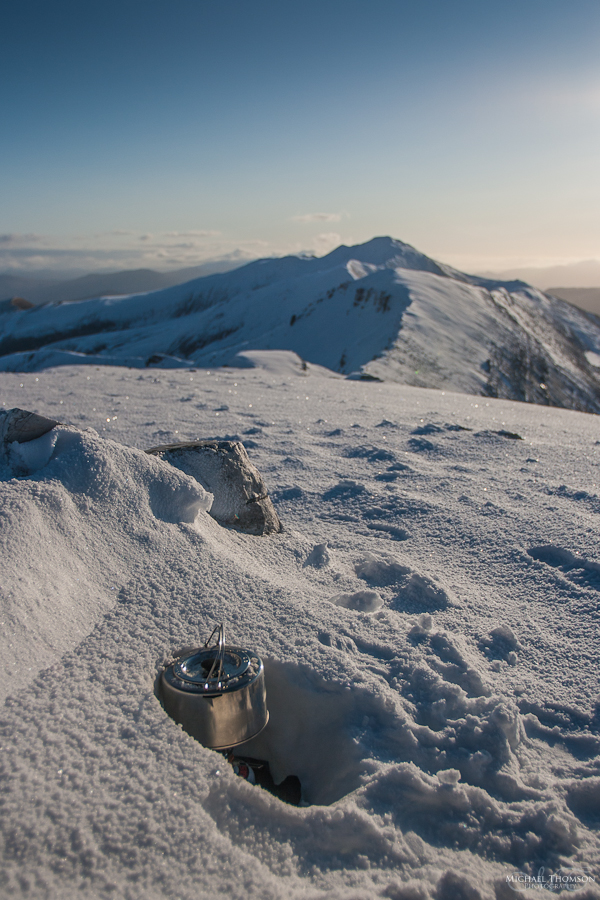 I sat and scoffed porridge and coffee at 1080m. There aren't many better places to have breakfast.  The ridge lay out before me, a snowy highway of delights.  It was 630am and I was fed and watered and had an alpine day presenting itself to me. It was glorious. 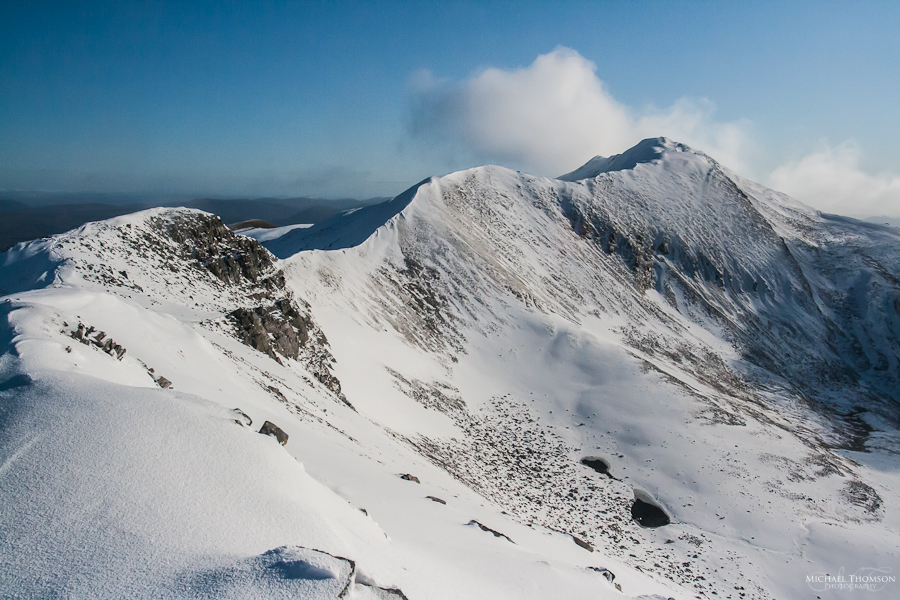 The ridge in wintery conditions is just a gem, every section a delight. The snow was in good nick and fairly consolidated so there wasn't much floundering when I broke through the crust. I toddled along at a gentle pace, taking the time to stop and soak it in whenever I could. 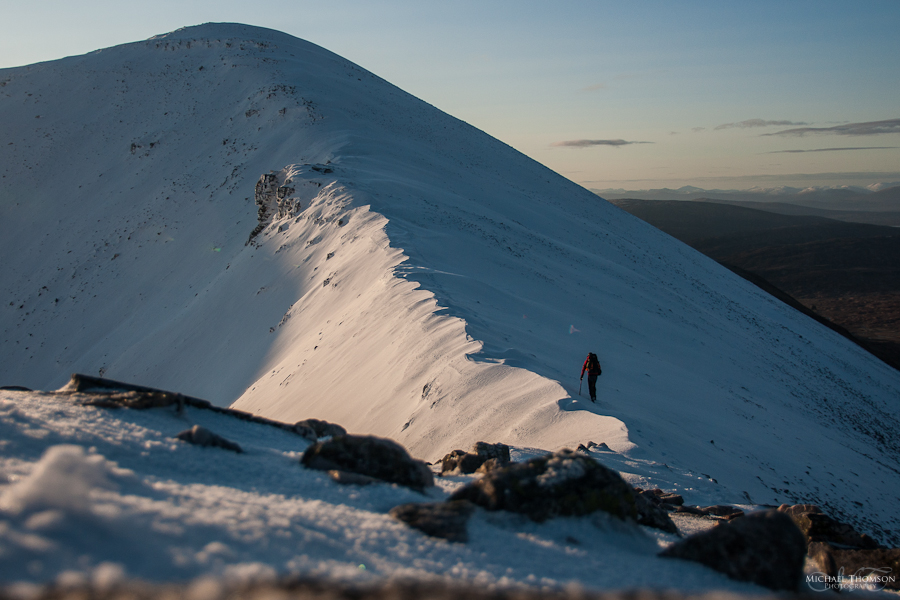 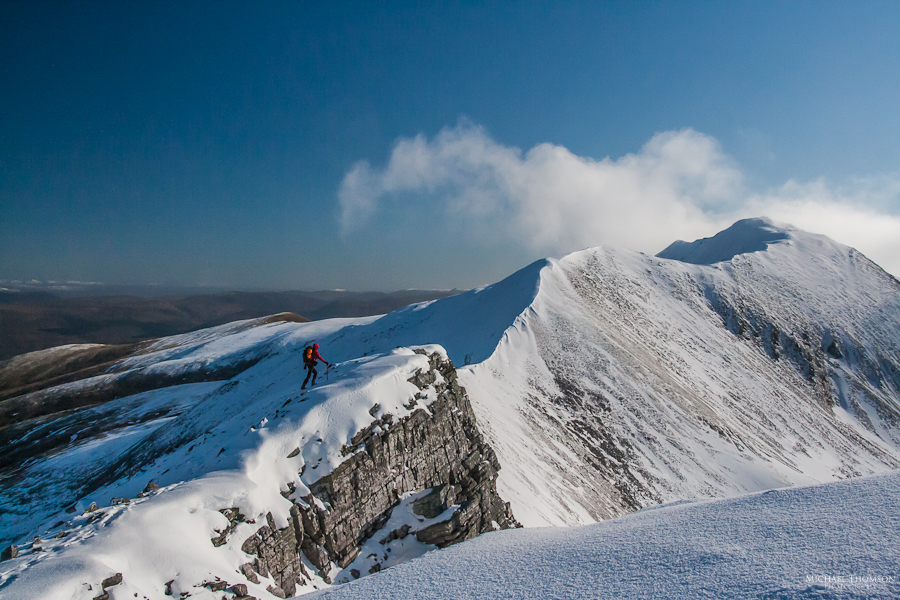 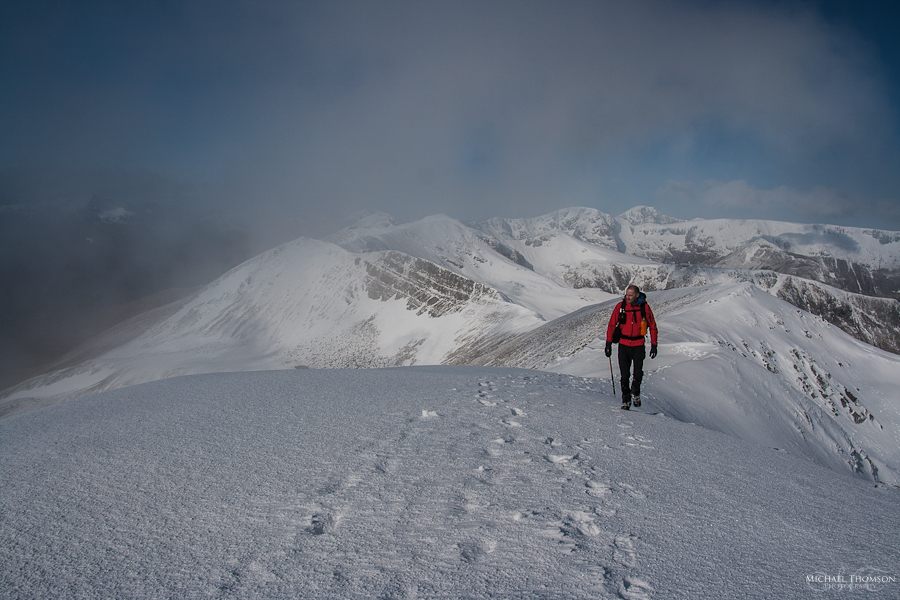 I popped up at the top of Stob Coire Claurigh and looked back along the ridge. The Ben was peeking over the top.

I'd met Petesy, Davy and Del the day before in Tiso's for a lunch chat and Petesy had said he was heading up there.  I looked at the great white shark's fin and knew he'd be in for a belter of a day out. I gave a wee wave of encouragement in case he'd been out of bed early and was already up there, then turned and headed on down.

I saw my one and only fellow punter on the way down to Stob Coire Gaibhre, a friendly lady moving uphill like a rocket powered whippet. She'd been up early too and was flying up.  I chose to believe my slow pace was because I had an overnight bag on and was in no rush, but we all know what was going on, too much scampi suppers and not enough climbing.  That should hopefully be remedied over the summer.

I took my time heading down the steepish descent and then toddled back along the lairig to say cheerio to the wee minister. He looked non-plussed by the whole thing, but I was grinning like a deranged idiot.  Nothing grey about those corries. 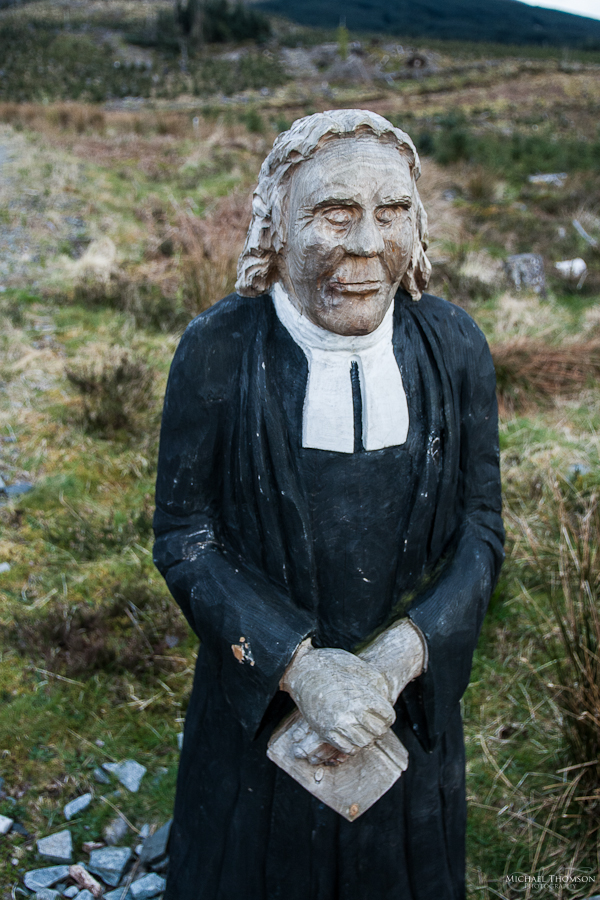 Some stunning photos there Michael (& glad you still have all your toes). Unless you forgot to mention your photographic assistant it looks like there was a lot of toing and froing involved. Well worth the extra effort - top notch stuff

Alastair S wrote:Unless you forgot to mention your photographic assistant it looks like there was a lot of toing and froing involved.

I noticed that too! My camera only has a 12second timer and my wee remote wouldn't work over that distance, so you must've been shifting to get yourself in those photos!!

I, on occasions have used my dachstein wooly mitts for the same purpose haha. And have also been caught out with the frozen boot syndrom not a nice experience on a high level camp.

You mention thermal boots being left in the motor,my wife would love a pair. Do you have any info on them please.

Great report and even better pics. We had very similar conditions on our weekend trip up NW.

Och thanks chaps, you're all very kind!

Alastair & Weemistermac: no lovely assistant I'm afraid, I use an intervalometer and set it to shoot at 5 second intervals. It means I can take my time getting to where I want to be for the shot, but the downside is I have to delete about 50 photos of me plodding about to get the one I wanted!

davetherave: I have two options for warm feet, the cheap option is my Regatta Solace slippers, which I have now replaced with option two which was a good bit pricier: PHD Minimus down socks.

I'm sure I won't be so lucky with the conditions the next time I'm out!

oh my goodness that was fabulous I really enjoyed it. love the picture of the stove. And all the other ones too!

I have an intervalometer on my old camera (Canon) and is a really useful feature. Don't have this on my upgraded bridge camera (Fuji), certainly miss it sometimes.

Stunning pictures of a great range

And a superb report too

That campsite looked a tad chilly to me

But what a setting though. Looked fantastic

have to say one of the best and entertaining reads I've seen in a while,excellent. Backed up by great pics to complete the story.

Only wish I could get up there at night...curse myself lazy bugger !!

me and Scoob had a cracking day on Sat too not too far from you in the eastern Mamores.

A really big thanks to you all for your supportive comments.

Thanks Graeme! The pressures on for the next one then!

Beautiful!
This demonstrates that unusual photo's require a good plan: camp high, rise early.
(and be a good photographer who knows the tricks, yes)

PHD down socks, they're just too much.