Beinn Chabhair to An Caisteal - I did it my way!

Beinn Chabhair to An Caisteal - I did it my way!


Feeling the need to redeem myself after last week's lessons

I decided to head off alone on a mostly pathless route - and did it without any mishaps!

Just the timing to sort, I was 2-3hrs out with my estimated end time.

Getting more confident with my planning (when walking alone) I'd checked the WH route for An Caisteal and Beinn a'Chroin and figured that Beinn Chabhair really wasn't that far away for me to include it. Part of my planning involved reading other reports on these hills - with a few reports on the first pair mentioning disappointment at not 'just dropping down' to pick up Beinn Chabhair too. Then I came across Monty's report from almost 2 years ago, showing a shorter route around all 3 (done in just 4hrs So this is just what I did, in reverse order, starting with the climb to Beinn Chabhair. Took 3 hours to get to the first summit but what a beautiful day (I don't edit pics - the sky was really that clear!) track to bridge crossing then heading up there

I probably left the river and started climbing too soon - walking in the tufts of long grass was almost as bad as deep snow (step, sink, step, step, sink... gap between the pair and Beinn Chabhair

I'd crossed a couple of fences, managing to find gates both times so taking short diversions to use them. Then I came across a wire fence taller than I could reach the top of with no gate in sight, so I climbed over it... and discovered the top wire wasn't actually attached to the fence posts

(but made sure it was sitting on top again - leave everything as you find it!) Once up Meall nan Tarmachan the views opened up, and I found the path! looking back down the path to starting point Bit chillier up there, stopped for lunch looking over to my next target - drop to the bealach then aim towards the right for the lowest point between these two, avoiding the rocks ravens circle over An Caisteal (there were 4 of them)

I made it to the bealach, double-checked my co-ordinates against my map (got a GPS with me this time!) then headed towards Beinn a'Chroin and found the next path! who pointed out the summit was the second cairn. So I continued and again checked the GPS to make sure I was at the summit (cairn at the first top I came to was bigger first cairn looking to An Caisteal 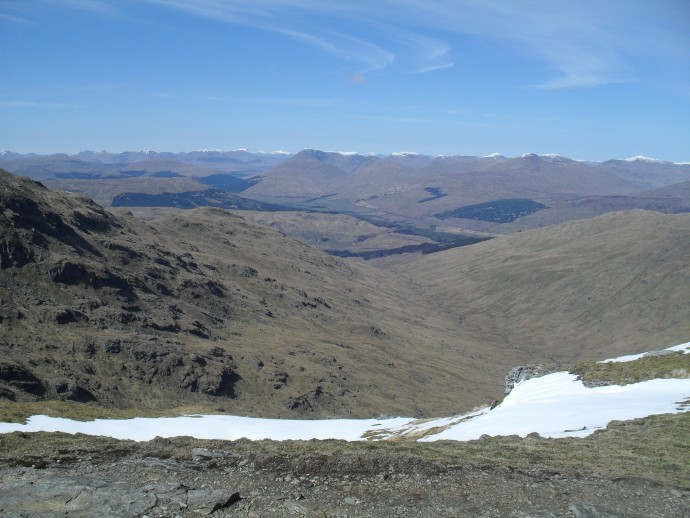 I retraced my steps back to the bealach and could see the path carried on straight up An Caisteal, which was really just on my way back to the car now. 1hr20 after leaving summit 2 I reached the final summit of the day 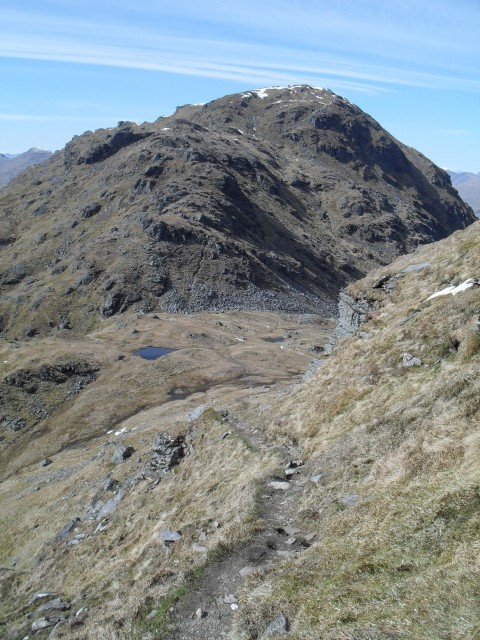 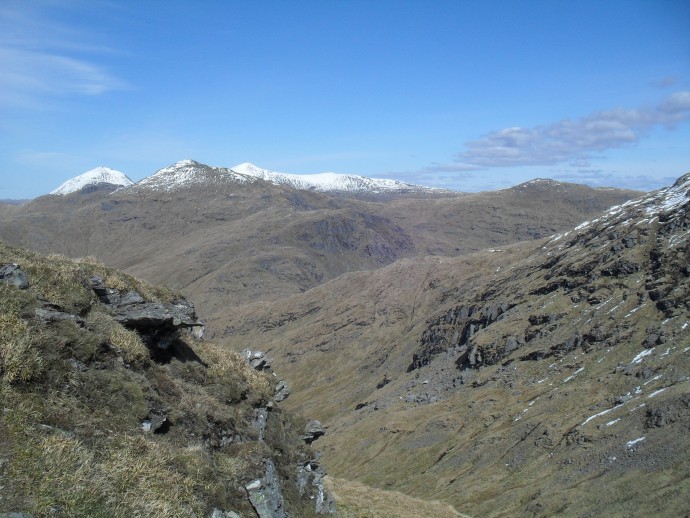 view to my first Munros (Beinn Tulaichean and Cruach Ardrain) Now all I needed to do was find a way down

I decided to aim straight (ish - avoiding snow slides and rocky crags) for the low point rather than retrace my steps to head around to get on to Stob Glas. Made for some extra zig-zagging but I got there without falling!

I even found a path heading over Stob Glas and followed this until it just stopped.

I did think about dropping down in to the valley and following the river back along, but decided that would make it a longer route and I was already nearing the time I said I'd be home by

So I made a gradual descent around Stob Glas, picking up bits of 'path' (more likely sheep trails) along the way until I could see the track I started out on. Then I just headed straight for that and joined it just before Derrydaroch. A long day but loved every minute - home to pile on the aftersun. Forgot the sun cream so a wee bit red after 9hrs with the sun beating down!

Great report Fi. Lovely weather. I set out to do these three long ago walked for hours up the glen towards Chabhair in the long grass. Made Chabhair & headed back to the car. Well done on collecting all three. I normally double Monty's time & add an hour, so you where spot on

Great report Fi -brings back good memories. These were some of my favourite early hills. I took 2 trips to complete and was knackered both times

Loving the pics, will add this route to my 'to do' list

An Caisteal and Beinn a Chroin are the next two hills I intend on doing so your excellent report will help me prepare for them. I might also do Beinn Chabhiar again as I did that in thick cloud but that will depend on tthe weather.

Cracking report and pics. I have fond memories from these ones although I done Chabhair as a single and bagged the other two another day. Great hills with stunning views. Well done on a big day out

Great photos in the sunshine.

Super report, I'm another that's just bumped these up the to do list!

You are Redeemed....great report on what looked like a fantastic day oot on the hills.
Noticed your face was a bit red....sure it was only just the lack of sun cream.

Did you manage to navigate your way to The Drovers for a pint?

Great report, bringing back memories of these.

Route is fairly similar to how I joined them up (I may have borrowed Monty's route too?) except maybe the route down - luckily I didn't have snow to contend with on mine.